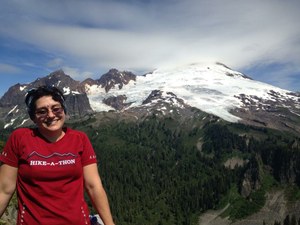 WTA's Communications Director. I like to wander and take time to appreciate the little curiosities like mushrooms, clouds and insects. Eventually, I hope to explore the remote Salmo-Priest Wilderness of Eastern Washington on a backpacking trip.

See all 38 trip reports by Kindra »

Taken Jul 26, 2010 on Kachess Beacon in the Snoqualmie Pass region.

First Place Offbeat Outdoors, 2010 Northwest Exposure photo contest. Al (Allegro) was a 3 year old, 25 lb. Pembroke Welsh Corgi, although his legs are about 6" long, this hike is no challenge for a corgi, bred for herding cattle on small farms in Wales.

Taken Aug 21, 2009 on Second Beach in the Coast region of Olympics.

Second Place Families on Trail, 2010 Northwest Exposure photo contest: "This picture was taken at La Push, Second Beach. My two boys enjoyed a sun break playing in the water before we did the short hike back to the trail head. They got so dirty that we didn't bother putting their shoes back on and just threw them into the backpacks. While we were walking I got the camera out to take a picture of my son's super cute sandy feet while he was in the backpack. It was just chance that they couple were having a picnic in the background."

First Place Families on Trail, 2010 Northwest Exposure photo contest: "The picture was shot just uphill from Sunrise on the way to Frozen Lake in Mount Rainier National Park in this August. Whenever my wife is busy I tend to head to a trail with the kids (7, 5, and 3) and we were trying to get to Fremont Lookout before a storm moved in. With the less-than-ideal weather I broke out the M&Ms early on this trip. We've called them "Special Hiking Bites" since my oldest daughter decided she didn't want to ride in the backpack anymore, and I needed some way to encourage her to go more than half a mile."