Skip to content
The Enchantments The Enchantment Lakes are an alpine wonderland of pristine lakes set among polished granite, soaring peaks, blazing larches, and ambling mountain goats. Widely regarded as the crown jewel of hiking in Washington, this trail exceeds even the wildest of superlatives. https://www.wta.org/go-hiking/hikes/enchantment-lakes https://www.wta.org/site_images/hikes/dsc_0687.jpg/@@download/image/DSC_0687.JPG

The Enchantment Lakes are an alpine wonderland of pristine lakes set among polished granite, soaring peaks, blazing larches, and ambling mountain goats. Widely regarded as the crown jewel of hiking in Washington, this trail exceeds even the wildest of superlatives. Continue reading

992 trip reports for this trail

In the Enchantments, nature has carved one of the magnificent places of this world--an alpine paradise of granite worn smooth by glaciers, larches manicured by wind and cold, and crystal blue lakes strung together by a creek that tumbles and thunders between them. Seemingly everywhere, herds of mountain goats calmly wander by. Superlatives simply don’t suffice, and you quickly find yourself resorting to otherworldly comparisons, just like the early visitors who bestowed place names like Aasgard, Sprite and Leprechaun on the fairytale surroundings.

There are three ways to experience the Enchantments, none easy. The absolute minimum price of admission here is a hike of not less than seven miles gaining at least 4,400 feet in elevation in order to make it to even just one of the lakes in the Upper Enchantments. This challenging experience should not be underestimated, please make sure you have the right gear and preparation. If you're lucky enough to get an overnight permit, you can backpack at your leisure via the Snow Lakes or Stuart Lake trailheads. If you’re a very strong hiker, you can make it in and out via either trailhead in a single day, although seeing all of the lakes this way is so grueling it borders on the impossible. With two cars (or a car and some bikes), you can hike point-to-point from one trailhead to the other and transit between the two. The thru-hike is typically done from the Stuart Lake trailhead, because it reduces the total elevation gain by 2,600 feet relative to going the opposite direction (although it still takes in the punishing climb up Aasgard Pass, which rises 1,900 feet in less than a mile). Pick your poison; enjoy the rewards.

This guide uses the thru-hike as a basis for describing the route through the entire Enchantments.

Starting from the Stuart Lake trailhead, follow the route to Colchuck Lake. From the end of the trail at the far end of the lake, cross boulders around the shore under the terminal moraine of the Colchuck Glacier (the trail may disappear at times, but cairns usually mark the way). After passing by a particularly tall boulder, the trail skirts a sandy beach and begins snaking through subalpine firs and creek beds. Soon after, the route begins climbing steeply over jumbled talus; this is the start of Aasgard Pass. The “trail” once again becomes difficult to follow (look for faint tread and cairns) as it slants upwards and to the left of a large and very visible larch grove approximately halfway up the climb. It’s not uncommon for hikers to follow the runoff stream to the right of the grove, but do not go this way. Stay to the left to avoid much steeper, impassable terrain. Around the grove, the route hugs the sheer rock opposite Dragontail Peak (the dark imposing pyramid that blocks out most of the sky to your right when looking uphill), before traveling through a section of loose rock and scree. Views are simply awesome throughout the ascent, stretching from nearby Colchuck Peak and the aquamarine of Colchuck Lake to Glacier Peak and Mount Baker in the distance. After crossing a branch of the creek, the route steepens again, becoming a hands-and-feet scramble through stunted larches. The final third of the climb is over large boulders, finally topping out at 7,800 feet. Depending on the age of your map, you’re standing in either Aasgard or Colchuck Pass, the beginning (or end, if going the opposite direction) of the Enchantments.

These are the Upper Enchantments. The lakes in this section sit in a stark moonscape of rock, scree and ice below the long ridge culminating in the summit of Dragontail Peak, just above the pass. The trail snakes its way through grey lichen-covered rocks along the shores of Tranquil and Isolation Lakes before dropping steadily to the broad plateau beneath Little Annapurna (so named for its resemblance to the much taller Nepalese peak).

Beneath Little Annapurna, the barren rock gives way to a lusher alpine meadow, where the creek connecting the lakes meanders gently before tipping into a deeper channel and speeding downhill. The first larches appear as the plateau ends abruptly in expansive views over Crystal Lake and the Ingalls Creek valley below. The trail now heads east and down a steep draw to Inspiration Lake.

This azure pool tucked deep in a basin below Enchantment Peak marks the beginning of the Middle Enchantments. Inspiration is perhaps the most dramatic of the lakes, with granite rising steeply on three sides and a stand of larches on the opposite shore. The trail proceeds through these larches before dropping a short distance down to Perfection Lake.

“Perfection” is no idle exaggeration. As you descend to the shore, you pass through tall larches whose ages are most likely measured in multiple centuries. The top of the lake is shallow and perfectly clear. The trail passes through gentle meadows of grass and heather and over carved inlets leading from Prusik Pass (a side trail runs up to this saddle below Prusik Peak, yielding even more jaw-dropping views) and continues along the eastern shore. The view back across the water reveals a stair-step wall of granite over which the main creek cascades down to the lake.

A short while later, the trail climbs slightly and rounds the corner to Sprite Lake, connected to Perfection by a narrow slot of white water. The view back upstream, of Little Annapurna towering above a small island in Perfection Lake, is one of the best in the Enchantments. Further down the trail, a descent along the fast-flowing creek ushers you out of the Middle Enchantments.

The Lower Enchantments are marked by the heights of McClellan Peak on one side and Prusik Peak on the other. Under McClellan’s lofty summit sits Leprechaun Lake, an irregular pond draped between ribs of granite topped by dense stands of larches. One rib forms a peninsula that nearly bisects the lake. Travel over narrow rock ledges along Leprechaun’s shore before heading over open terrain and then climbing above steep slopes on its twisting way down to Lake Viviane, the last (or first) of the lakes.

Viviane rivals Inspiration for the drama of its setting. It sits in a deep basin below the long, graceful fingers of upturned granite that make up Prusik Peak. Viviane’s far shore is a wall of rock; its near shore, a smoothed wave of granite where glaciers once exited these heights and where Snow Creek now streams out of Viviane down to Snow Lakes. Whether this is your introduction to the Enchantments or your parting glance, the views in every direction from this rocky shelf are an equally fitting greeting or sendoff.

Crossing the outlet on a bridge of weathered driftwood, you begin the descent to the Snow Lakes trail. The stretch between Lake Viviane and the mouth of Upper Snow Lake is rugged at times (including some scramble sections) and breathtakingly beautiful. Snow Creek twists and roars between stands of subalpine firs (the larches end a few hundred feet below the lake). Until you reach the dark forest along the shore of Upper Snow Lake, you’ll still feel as if you’re wandering not through wilderness, but a garden landscaped by some unseen hand.

You now follow the Snow Lakes trail back to its start on Icicle Creek Road. Be prepared that the descent from Snow Lakes to the trailhead can be even more painful than the climb up Aasgard Pass--the repeated percussion of walking steeply downhill while losing more than a mile of elevation takes its toll. Long before you reach the parking lot, you will be shuffling listlessly, every step a small victory of mind over matter. However, the alternative--proceeding from the Snow Lakes trailhead to the Stuart Lake trailhead--gains 7,000 feet in elevation, softening you up before the descent of Aasgard Pass, which is only slightly less punishing to the feet and even more demanding of your quads and knees.

All who come here would agree: the pain is a small, small price to pay. Your mind will quickly forget the trials of the way out (or in), but will be forever filled with visions of what can only be described--in a final fit of hyperbole--as heaven on earth.

WTA Pro Tip 1: The goats that live in the Enchantments have become accustomed to finding salt in the urine of hikers. This causes them to follow their human guests a little too closely, which is as unsettling as disappointing (a mountain goat trying to drink your urine loses a bit of its wise, dignified mien). To help prevent this too-intimate interaction, always use the privies provided, which keep waste completely out of reach of prying snouts. The Forest Service has posted a video guide to hiking safely with goats.

WTA Pro Tip 2: Camping in the Enchantments, including the entire area from the top of the switchbacks above the Snow Lakes trailhead all the way to the Stuart Lake trailhead, is by permit only from May 15th-October 31st. Permits are awarded by the Forest Service through a lottery that opens in February. A limited number of permits are available same day at the ranger station in Leavenworth.

WTA Pro Tip 3: Dogs and campfires are strictly prohibited in the Enchantments. Dogs were disallowed in order to enable the recovery of ptarmigan populations they once disturbed. Fires are restricted not only to prevent forest fires, but to avoid scavenging of dead wood. Decomposition of the wood provides scarce organic material to soils in alpine areas like the Enchantments. The restriction includes camp stoves (such as the BioLite) that burn small twigs.

To reach the trailhead, turn onto Icicle Creek Road from US2 on the very western edge of Leavenworth. Drive 8.4 miles and turn left onto Forest Service Road 7601. Follow the bumpy, sometimes potholed dirt road 3.7 miles to the Stuart Lake trailhead. Parking for about 20-30 cars and a toilet are available in the lot. Northwest Forest Pass required.

Note that FR 7601 from Icicle Creek Road to the trailhead closes during the winter, typically from November to May, making for a short summer hiking season. 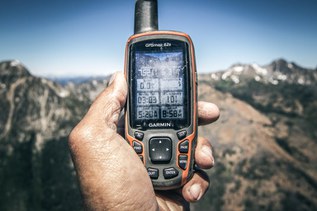 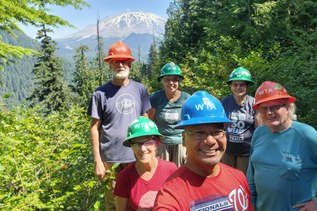