Enjoy a steep trail to a summit east of Lake Whatcom with gorgeous views of Puget Sound and the surrounding mountains. Continue reading

87 trip reports for this trail

Unlike its flat, lakeside cousin the Hertz trail, the Chanterelle Trail is 2.4 miles with 1000 feet of elevation gain on long switchbacks through a mix of forest types, supporting a variety of wildlife. The views make it worth the effort, ending with a breath-taking vista of Lake Whatcom, the Cascade foothills, Bellingham Bay and the San Juan Islands.

In the second-growth Douglas fir forest among gurgling streams you’ll likely find a variety of woodland and aquatic species. In the winter birders have spotted chestnut-backed chickadee, golden-crowned kinglet and varied thrush followed by evening grosbeak and white-crowned sparrow, Hutton’s vireo and rufous hummingbird in the spring.

With their leaves gone, the tree branches create a lacework overlay of the panorama from the hillside as you ascend, making winter a great time to visit this trail.

Hikers can create something of a loop by descending (or ascending) via the Wickersham Road. This makes the hike shorter, but steeper. As more trails are built here though, more loop options or longer hikes may emerge.

NOTE ON THE AREA

In 2014, with facilitation by Whatcom Land Trust and a number of other organizations, approximately 8,800 acres of second-growth forest and stream habitat on the east and west sides of Lake Whatcom were transferred from the Department of Natural Resources to Whatcom County.

The land is immediately adjacent to Lake Whatcom so this move not only created the seventh largest local park in the U.S., it also protects the water quality of the lake, which serves as the drinking water supply for half of Whatcom County, including all of Bellingham.

The county is managing the area for non-motorized recreation with running, hiking, biking and horseback trails that connect neighborhoods and communities through forests that will eventually mature into old-growth ecosystems. WTA has been developing the trail system here since then, with annual work parties in partnership with several local and state agencies.

From Bellingham, follow North Shore Drive to Lake Whatcom Park and choose the first parking lot available.  There is a kiosk there with directions for both Chanterelle Trail which climbs the mountain and the Hertz Trail which follows the lakeshore. 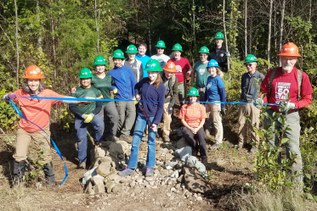