Skip to content
Mailbox Peak - Old Trail You may have heard Mailbox Peak mentioned in slightly hushed tones, the kind reserved for stories about some legendary storm or a bad accident. What inspires such reverence? The original route, which entails 4,000 feet of climbing in less than three miles. The newer, gentler trail takes twice as much distance to achieve the summit, but nothing will permanently erase the original trail's fearsome reputation. https://www.wta.org/go-hiking/hikes/mailbox-peak-old-trail https://www.wta.org/site_images/hikes/mailbox-main.jpg/@@download/image/Mailbox-Main.jpg

Print
The eponymous Mailbox, Mount Rainier - even the occasional place to sit - you never know what you'll find up here. Photo by Paul Kriloff 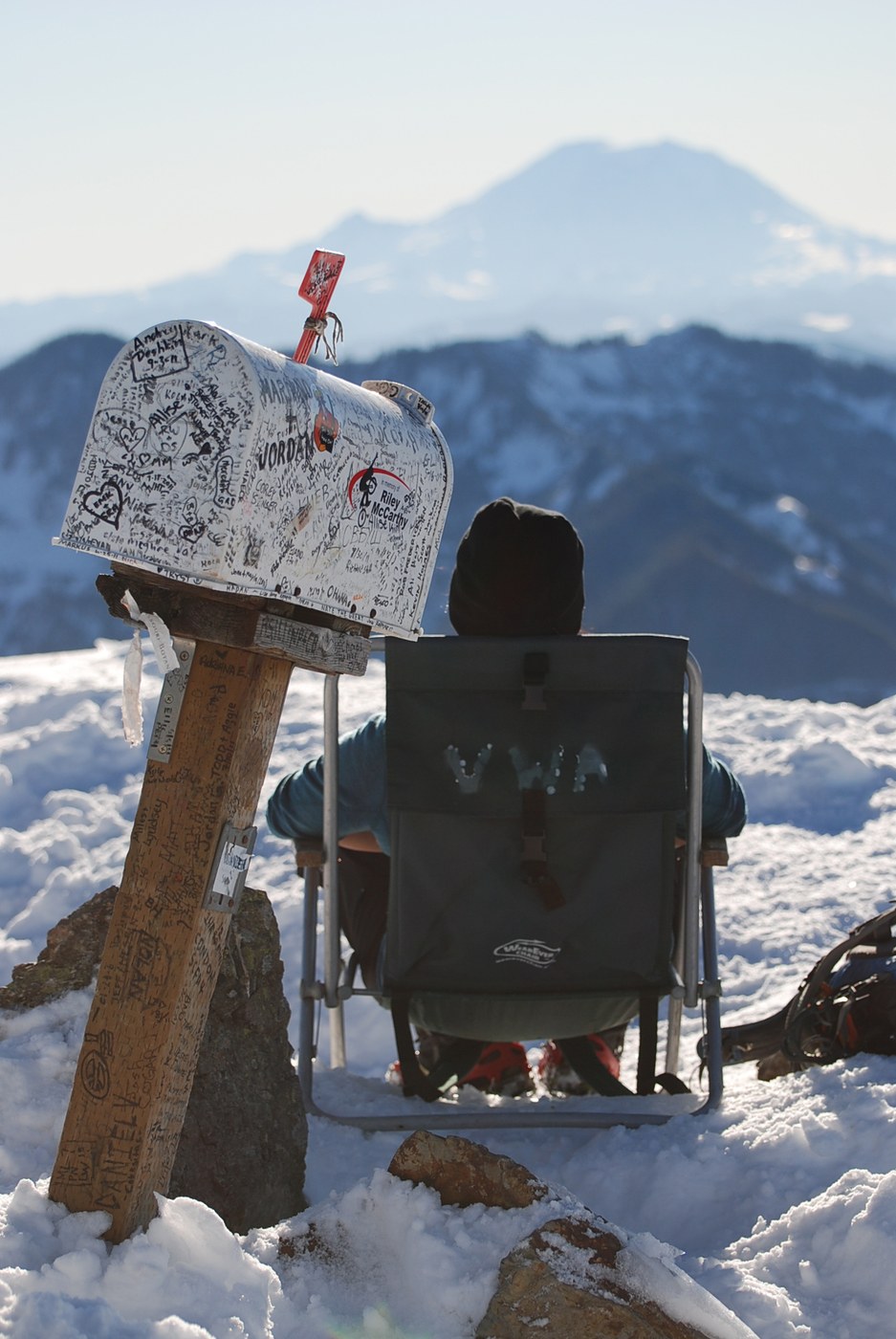 1554 Trip Reports for this trail, below

You may have heard Mailbox Peak mentioned in slightly hushed tones, the kind reserved for stories about some legendary storm or a bad accident. What inspires such reverence? The original route, which entails 4,000 feet of climbing in less than three miles. The newer, gentler trail takes twice as much distance to achieve the summit, but nothing will permanently erase the original trail's fearsome reputation.

The old trail up Mailbox Peak holds a special place among the hikes off I-90. A rough climber’s route, it is an unrelentingly steep, rooted, rocky, muddy torture test, a crucible in which the summits of summer are forged. More than almost any other trail, it assaults gravity with single-minded determination, proceeding more or less due east straight up a ridgeline to the summit, gaining some 3,800 feet in two and a half miles after a short initial jaunt up a Department of Natural Resources (DNR) road. There is nary a switchback in sight.

This makes it an attractive, if treacherous, prize for hikers. Until the Department of Natural Resources built a new, much gentler trail to the summit, accidents and rescues of wayward hikers were a fairly regular occurrence. Most of the old trail remains, marked for much of its length by a string of white reflectors nailed to trees – an earlier step DNR undertook to keep the uninitiated from losing their way in the most confusing parts of the trail.

For those still looking for the brutal ascent to the summit, start up the gated road, bypassing the inviting new trail about a hundred feet past the gate, on the left. Roughly a third of a mile from the gate, turn left into the woods. A sign with warnings about the difficulty of the trail (it's not exaggerating) marks your point of departure. The next fifth of a mile is relatively gentle and scenic, traveling along a runoff stream in tall forest.

And then things get steep. The trail starts climbing and doesn’t stop - a very brief flat section in a third of a mile is a momentary aberration. In fact, the trail grows steeper and steeper over the next half mile until it is pitching upwards at its most severe angle. Though it may not get any steeper from here, it hardly lets up.

Along the way, there are few landmarks to mark your progress, just slight changes in the surroundings. In 250 yards, the trail crosses into dark, dense new forest – the least scenic stretch of trail. 250 yards beyond that, the trail starts traveling over exposed roots that are incredibly slippery when wet (which is often). After a third of a mile of these root ladders, it breaks out into the open for the first time into a narrow and at times very loose, steep track.

A little less than two miles from the gate, the informal trail intersects the new trail. From this point forward, old and new become one. For travelers of the old trail, it means putting up with a series of switchbacks for the next third of a mile. Turn right and enjoy some solid footing for a change. About a quarter of a mile from the trail junction, the switchbacks lead to the right across an open talus slope.

When deep snows blanket the hill in late winter, an informal route proceeds straight up the ridge line instead. This section presents some avalanche risk, as the terrain to the left is typically wind-loaded by persistent gusts that blow from climber’s right to left. This area has been known to slide, though not in quite a few years, possibly because of the increasing amount of foot traffic.

After a couple of sweeping switchbacks and 250 yards in the rocks, the trail reaches the spot where the old trail once popped out of the trees and onto the ridge. Whether you’ve come up the new trail or the old, Mailbox is ready to deliver its final punishment before surrendering the summit: a quarter mile of travel that gains 500 more feet, a tall task for legs already softened up by more than a Mount Si’s worth of elevation gain.

Mailbox may not be known for its scenery, but the terrain is not without its rewards. From the talus slope all the way to the top is proper wilderness, skirting a forest of old gnarled trees that have survived the harsh winds of many a winter. On a nice day, the views from the summit are as good as any along I-90. Mailbox stands at the prow of a long ridge, giving it greater prominence – ubiquitous Mount Rainier seems even closer than it does from Bandera or Granite. In early summer, the final half mile is covered in beargrass, lupine, and paintbrush, as well as several other varieties of wildflowers. In winter, every tree, rock and blade of grass along the summit ridge will often be spectacularly rimed with windblown snow and ice.

The greatest reward is the joy of the effort itself, of digging deep within yourself to summon the strength to conquer the mighty Mailbox and inscribe your name in the summit register contained – appropriately enough – in a mailbox installed at the top.

Take the Trailhead Direct bus to this trailhead 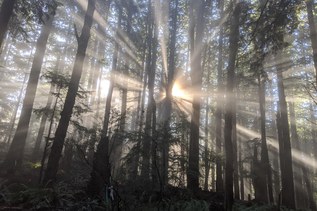