Obstacles on trail:
Trees down across trail,
Muddy or wet trail,
Overgrown in places. 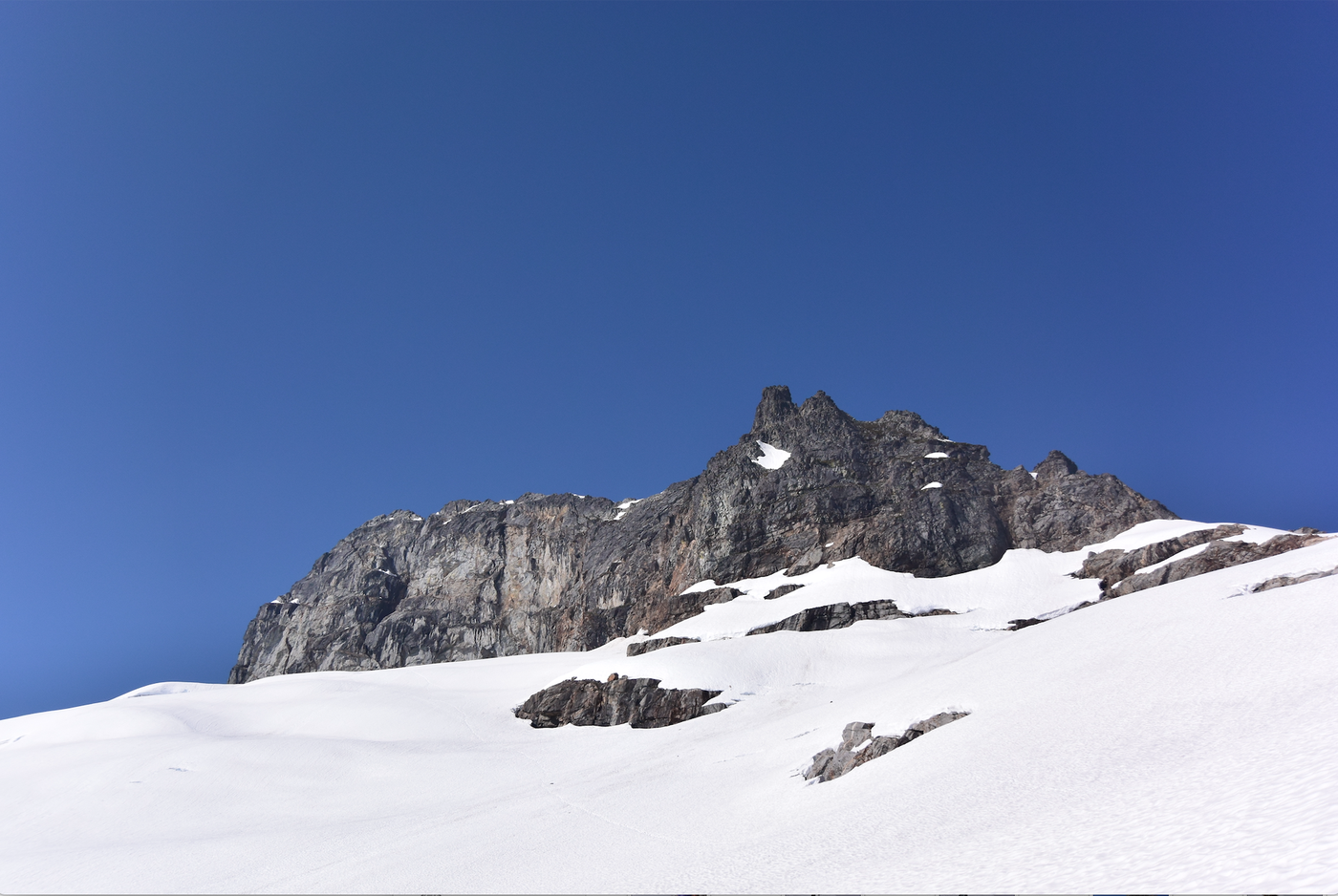 C2c attempt via Bedal creek. 4,500ft gain over 9.5mi over 13h45m, group of 3. Turned around at 7,200ft due to the mix of snow and rock causing route finding issues and transition moves slowing us down significantly.

The forest road (FS 4096) doesn't exist on google map. Top 3 worst roads I've driven on, comparable to Hidden lake lookout and Mt Adams. Potholes weren't even the major issue. The road was full of loose rocks, bumpy, steep, narrow (only 1 spot to pull over, about ~2mins from trailhead, absolutely no space to pull over other than that, so it's a commitment...), winding, with overgrown bushes on both sides that occasionally scrapes the car windows. I was driving at 10-15mph on the way up and it took ~20mins including stop once to check the map. Took 10mins down. You want to drive fast enough to have the momentum to not to slip on the loose rocks, but not too fast as the road turns often. The easiest way to find it is to drive to the coordinates (48.0857, -121.3886) on the Mountain Loop highway (FS 20), and turn right at the sign. Or drive to the Bedal Creek trailhead, continue 0.8mi and turn right. After 6 switchbacks, you will arrive at the trailhead, marked by orange ribbons tied on the trees and a small yellow sign. Space for 3 cars on the shoulder of the road. Any extra cars will have to block the road. Definitely take a 4WD/AWD with high clearance. One group member drove up the forest road in sedan and ended up reversing after a quarter mile. This forest road definitely lives up to its name.

The route can be divided into a few distinct segment: trail, climber's trail, heather meadow, traverse to the saddle, mellow glacier, mixed snow/rock scramble until we turned around.

Runs parallel to the Bedal creek. No creek crossing. Overgrown and high (sometimes spiky) bushes on both sides. I was too busy keeping the bushes off my face. Many downed trees to hop over or swing under. Some big logs have steps cut in them for you to easily step over, which was nice. Muddy and wet in places where streams run across.

Have a few tracks loaded to your gps/phone app to locate the turnoff point, about 1.5mi in. Fainted trails started from there. Follow the general direction aiming for the ridge at 5,000ft and follow the least resistant path. Much veggie belay and tree hugging. Many devils club in between. Be careful of the salmonberries branches as they are spiky. Noticed that most bushes by the streams are spiky too. Some pink ribbons tied on the trees here and there. Embrace all these for about 1,200ft. Keep your head up and maintain the momentum :) Reached a short boulder field at around 4,900ft. Two of us did this part in trail runners until the boulder field and stashed them here. Easy scramble on solid boulders. Exit it to the right, into narrow trail in the heather meadow.

Entered continuous snow at 5,300ft. A gentle rising traverse to the saddle between Bedal peak and sloan peak. We followed some fresh plunge step boot track and packed down the path. Used ice axe. Snow was soft enough that crampons were necessary.

At the saddle, we got our first view of the summit. Started out from kicking steps for a more direct path and eventually stepped into a boot track. At 6,300ft, one party member needed to refill water so we took a detour to the semi melted rock island. Snow was running thin near the rock, so take some extra caution when looking for a spot to step on the rocks. We put on crampons here as the slope steepened and snow became firmer. Roped up at 7,000ft when we saw huge crevasses below the route and slope became steeper, and a slip here would be consequential, even we knew that we would probably unrope pretty soon lol.

This portion was a struggle due to spring/summer transition conditions, and my report will soon irrelevant as the snow melts. Normally you'd be able to drop down into the trail. We encountered lots of snow/rock transitions that slowed us down significantly and we spent too much time trying to go up and down trying to find a path that worked.

Unroped and removed crampons at 7,200ft in front of a moat. Walked around the moat and stepped into rocks starting the mixed scramble. Sometimes stepping on snow while leaning on the rocks. Sometimes butt scooting on rock while kicking toes into the snow. Sometimes on foot on snow and one on rock. After over an hour of the slow going route finding and transitioning, we decided to call it, knowing it'll be at least 2hrs around trip from this point.

In retrospective we could have rappelled off or downclimb (possibly protected with pickets) the short steep snow section to get to the trail.

Roped up again after we got back near the moat. Mashed potato snow was balling up under crampons. Downclimbed / carefully plunge stepped down a steeper section right above 7,000ft. I slipped but was able to quickly self arrest. Unroped again at 7,000ft and plunged stepped down to the saddle and then the traverse. We crushed the climber's trail, just wanting to be down with it. Uneventful hike out. Bedal creek became more muddy and wet at this point.

11am unroped and removed crampons

4:15pm back to climber's trail