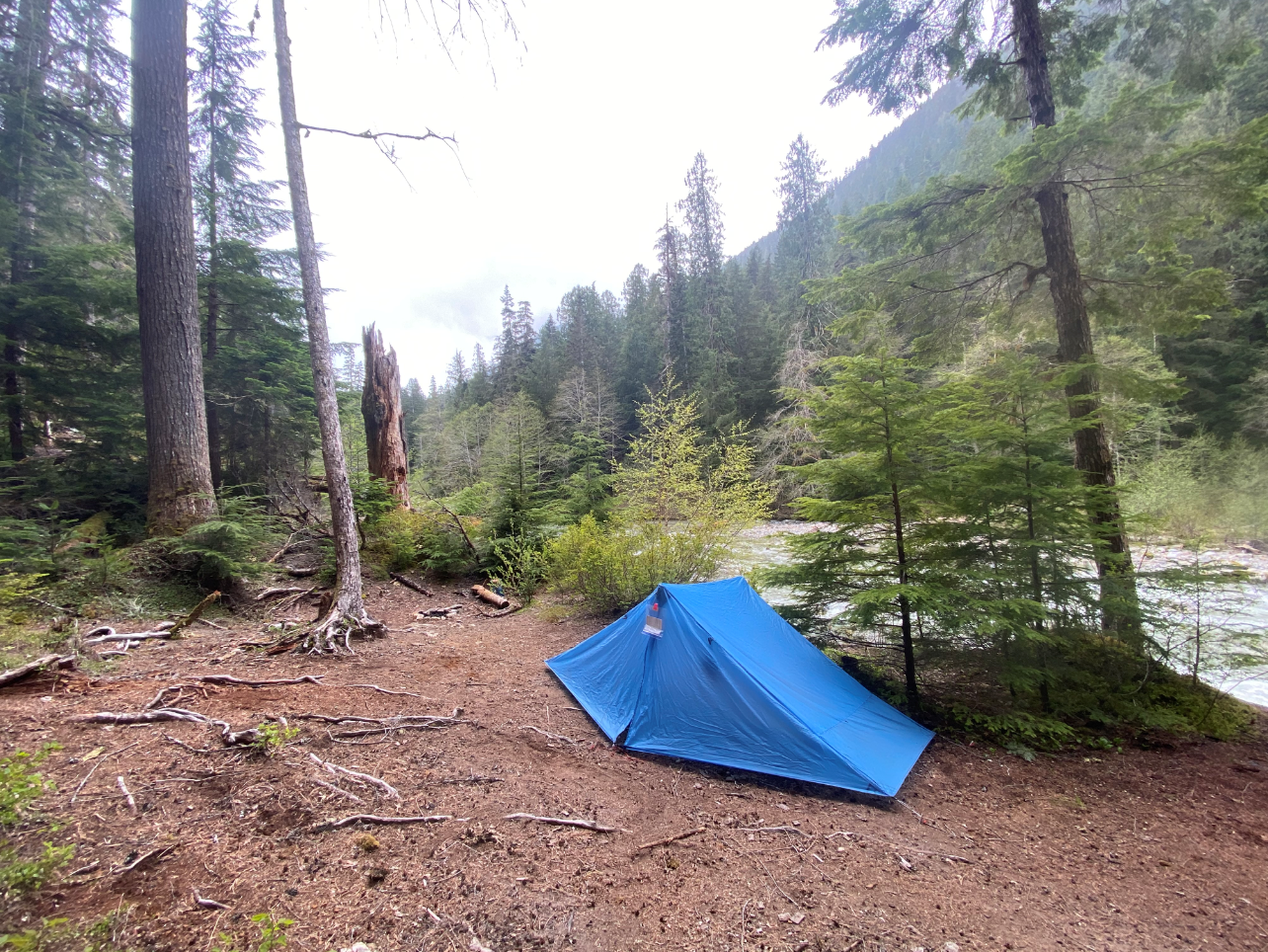 It is still considered "Winter" in North Cascades/Ross Lake, and it will be until May 15 when the reservation permits kick in. To get a permit, we followed the instructions for Winter Permits from the National Park Website on Friday evening and got a reply almost instantly with our permit to print and hang on my pack/tent. Remember, you need a permit for overnights in Ross Lake and North Cascades at all times during the year. The winter permit process is super easy and can be found here: https://www.nps.gov/noca/planyourvisit/permits.htm

On Saturday, we started from the parking lot at Colonial Creek Campground South. There were around 10 cars in the lot; most were sightseers and one was a group of day hikers. The main bathroom is not open, but the vault toilet across the parking lot is open and stocked with toilet paper and hand sanitizer. Just beware that the latch on the toilet paper dispenser is broken and it will flop down and knock you on the head. The back half of the campground where the trailhead is located is still closed for the season, so you have to walk past a gate for a couple hundred feet to reach the trailhead from the true parking lot.

The creek (which is really more the size of a river) is flowing high and fast and extremely cold right now, so use caution! Within the first quarter mile, we crossed paths with a hiker who said they'd been out along the Thunder Creek Trail for the past 3 weeks and they had 3 different camps set up. They told us there were 5 backpacking groups at the McAllister Stock Camp already and that there were over 120 downed trees between McAllister and Tricouni Camps (the bridge to the McAllister Hiker Camp is still washed out). We thanked the hiker (now wondering many things about this hiker's adventures) and continued hiking, unconcerned because we had a permit for Neve Camp. Other than that, we only crossed paths with a pair of day hikers and didn't really see anyone else until Sunday.

The hike in to Neve is lovely and free of trees. We stopped to peek in at Thunder Camp, just to see. There is currently a small stream to cross to get to the camp and we couldn't see a way to cross it without getting feet wet, so we can't report much on the conditions of the actual camp. We pressed on and checked out Thunder Group Camp. It's super cool! This seems like it would be a great destination for a family as it has lot of space, its own backcountry toilet and it's not too far of a hike. There are a few stream crossings, but all can be crossed without getting your feet wet, especially if you have trekking poles. Neve camp is just past the turn off for Fourth of July Pass. It's probably 0.1 mile hike from the main trail to the actual camp. There are no bear lockers at Neve or at Thunder, so you definitely need to bring a way to safely store your food. North Cascades requires a bear hang or bear cannister; we chose the latter and had no issues at all.

At Neve, we were fortunate enough to secure one of the sites with a direct view of Thunder Creek, which was magical. There was already another pair in the other view spot and another pair arrived later to camp in one of the other spots. Each camp spot has a small established fire ring. After having a snack and setting up camp, we decided to slack pack further along the trail toward McAllister. It's clear that a trail crew just came through and did a ton of work to clear some pretty major blowdowns. HUGE THANK YOU to these trail crews, logouts are tough work and they did a great job! The trail is free of blowdowns up to about a mile after Neve Camp. The blowdowns after that point are fairly numerous, some trickier to get over than others, but all safely passable if you take your time. There are also a good number of stream crossings, which we were able to cross almost entirely without getting feet wet (I got a toe wet in one when a rock rolled under my foot).

We hiked until about 0.75 mile short of McAllister and decided to turn around. We'd been hiking just under 2 hours and it was 6pm, so we needed to head back so we could start cooking dinner before the sun went down. Back at camp, we tucked in for dinner and made a small campfire after the sun went down. From the smoke, it looked like our neighbors were doing the same. Eventually 9:30 rolled around (well past Hiker Midnight) and we dumped a bottle of water on our coals and stirred it around to make sure the fire was completely out. We stashed our bear cans away from camp and headed to bed and had a very pleasant sleep with the sounds of the creek rushing next to us.

In the morning, it was quite chilly. I ate breakfast in my sleeping bag. We took our time getting ready, safely stashing our bear cans, and setting out to slack pack up to Fourth of July Pass. This trail goes UP and there are a good number of blowdowns here too. All can be crossed safely if you take your time. We didn't see any snow until the last half mile to Fourth of July Camp, even then, it was snow patches over the trail that were the consistency of wet sand. So, really nothing that even microspikes could help with. At Fourth of July Camp, it looked like two of the tent sites (the ones with the best views) were melted out; everything else was still covered in patchy snow. We sat in one site and had some snacks, enjoyed the view, and attempted some plein air watercolor painting. We're definitely not professionals, but it was super fun!

We headed back down, marveling at the fact that we still hadn't really seen another person, taking our time going over the logs. Back on the Thunder Creek Trail, we crossed paths with a pair of hikers with overnight packs heading back to the trailhead. Back at camp, we packed up and headed out. The hike back was just as cool as the hike in and we soaked in the sights and sounds and sunshine, not really wanting to get back to the cars too quickly. But, eventually we arrived at the parking lot, which was a little more full with cyclists, boaters, and hikers today. It was a really great trip and I'm so glad to know that this can be an early season hike. I'll be keeping it on my list for future springs!

Example of a stream crossing 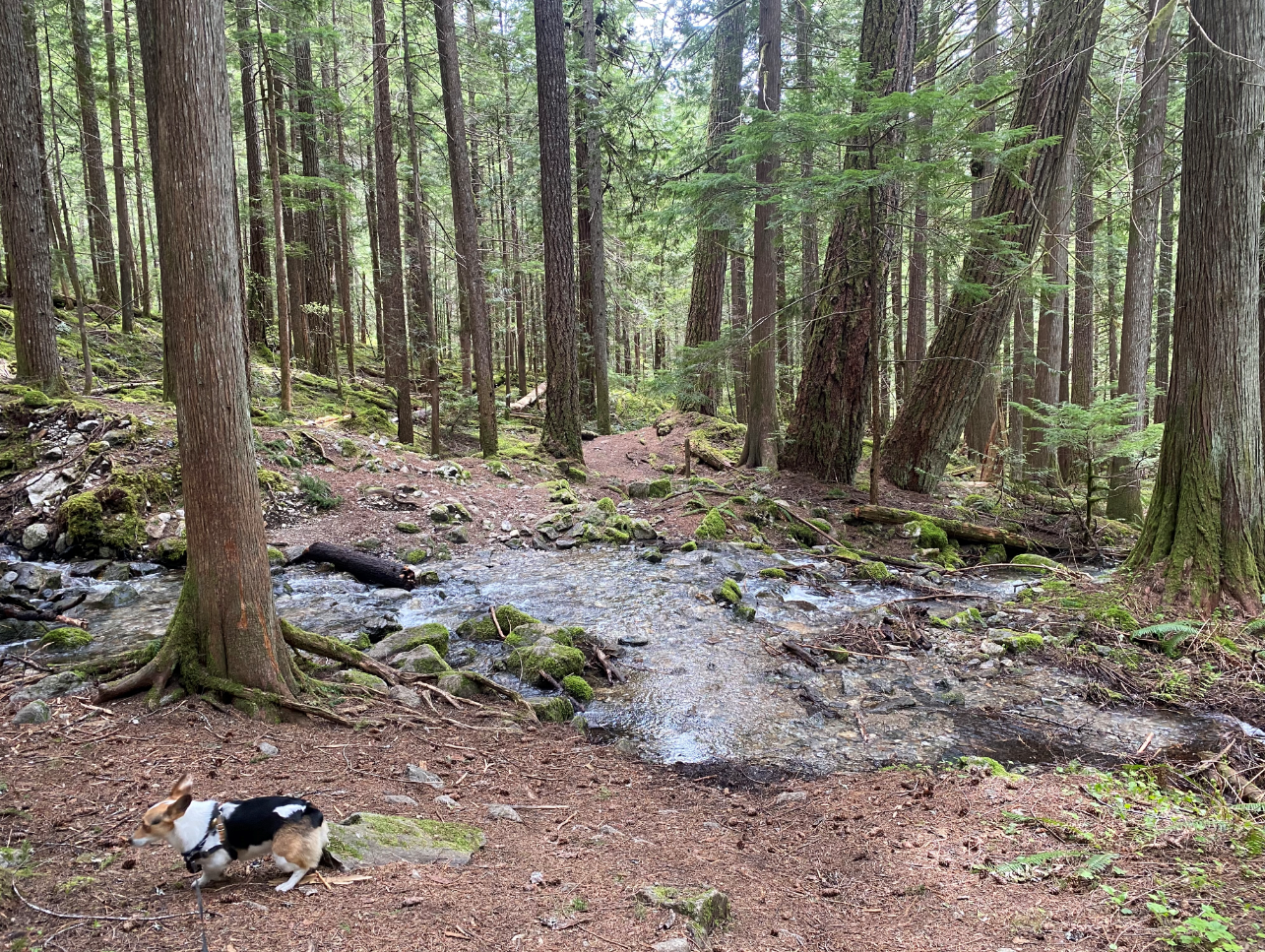 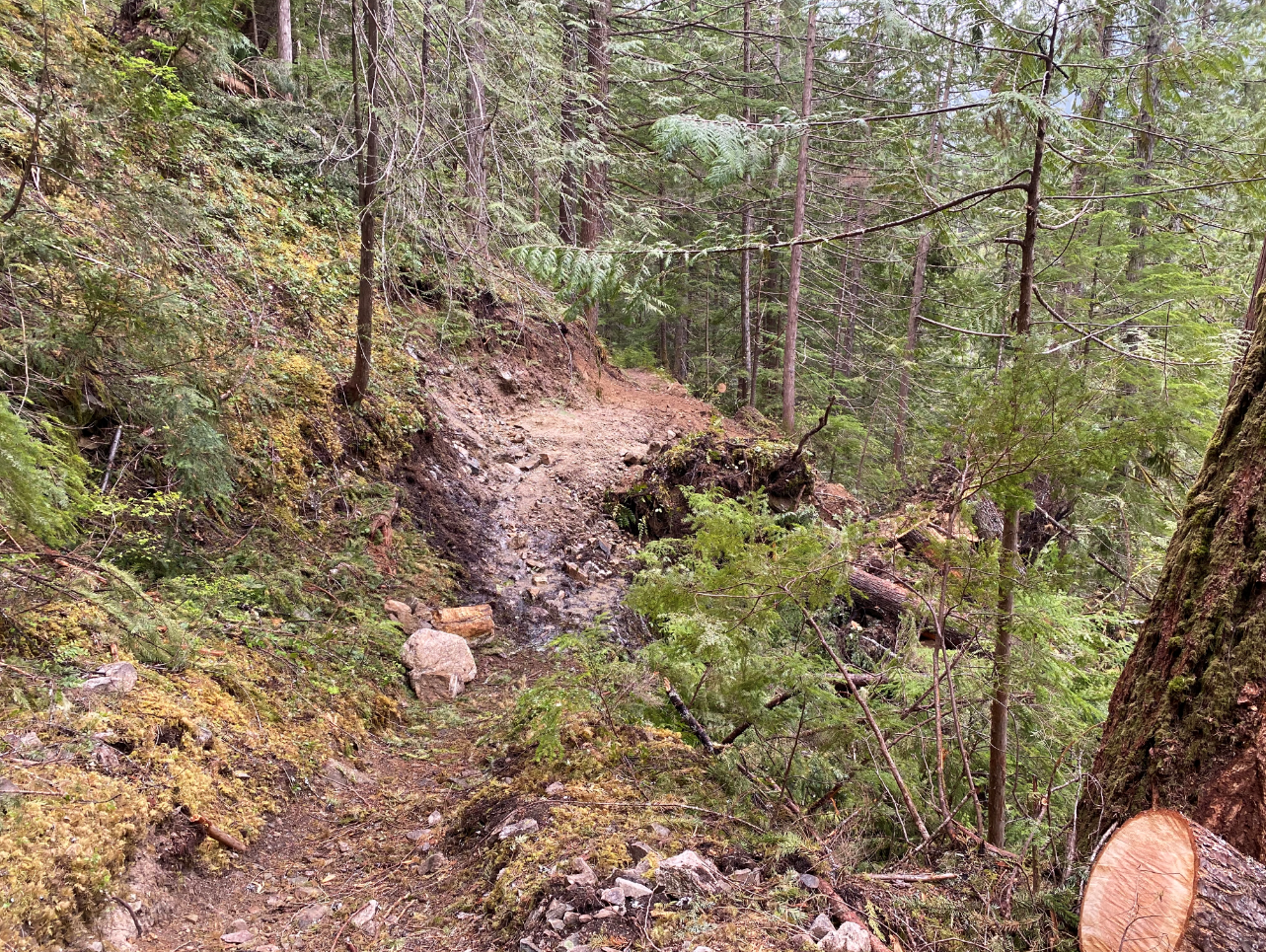 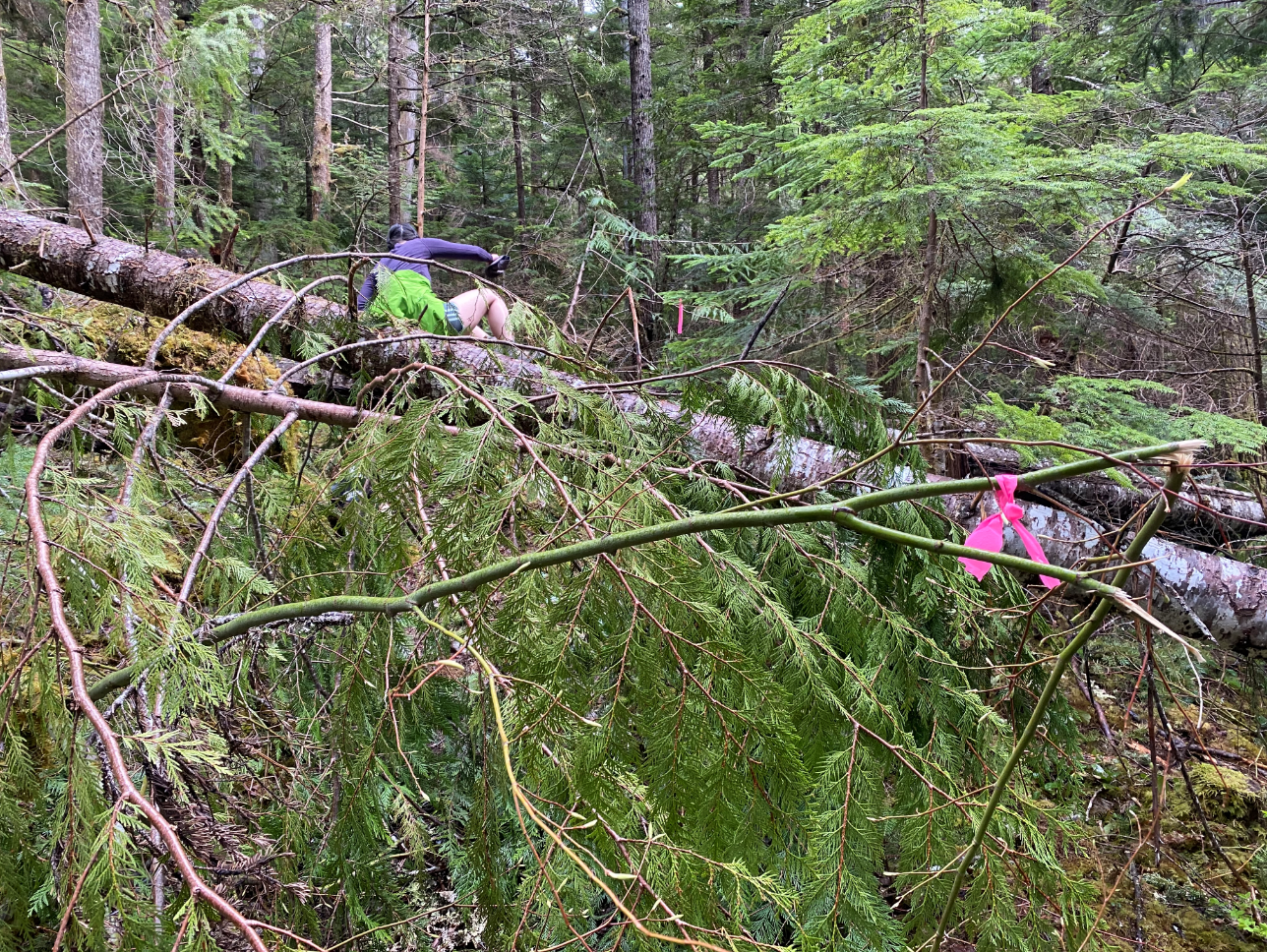