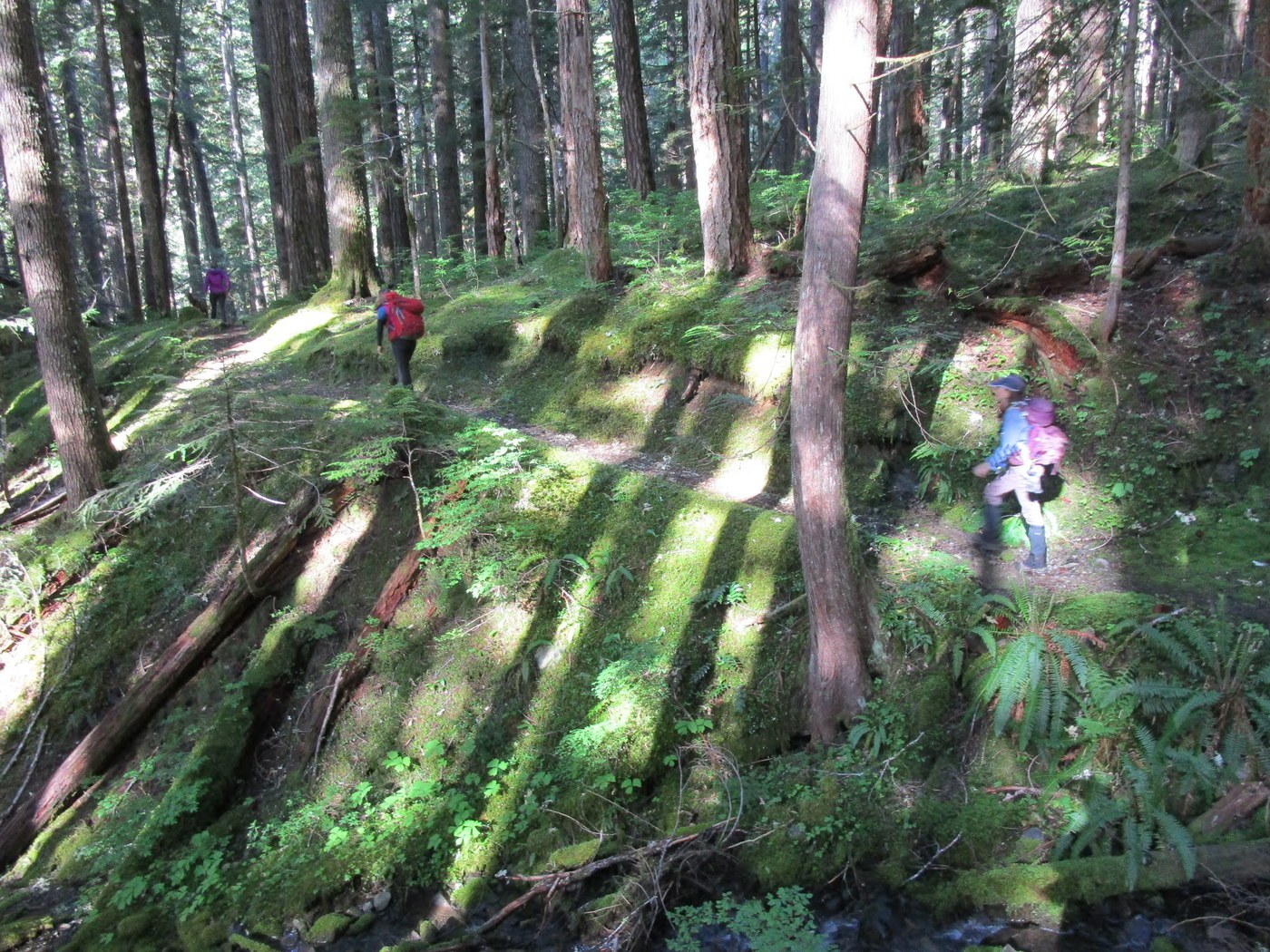 This was a BCRT that I led for 4-days over Memorial Day weekend. In the "snow conditions" tab, there was no option for "here's where the snow started" so I just put snow free because we didn't work past the snow line on either trail. Snow line on Appleton was 3100 feet. Snow on Boulder Lake started about 3700 feet.

Here is a summary of what we accomplished:

1. Trail from Boulder Creek Campground to the junction and beyond toward Appleton Pass

a. All trees cleared
b. both sides of the trail brushed (using the kombi power brushers) up to South Fork Boulder crossing (so approximately 1.7 miles).
c. All messes of twigs and branches cut up and cleared out
d. Hand-lopped when the brush got more sparse
e. Trail south of North Fork Boulder to the 3100 foot elevation point got hand cleaned with sticks and whatnot tossed, nothing left that's bigger than a sharpie pen
f. Trail north of North Fork Boulder to the BC campground was raked after brushing to get rid of all organic debris to help sustain the trail.
g. All drainage addressed. Some were quick cleanouts of existing drain dips, some more extensive. One drainage problem, though it wasn't currently running with water, had obviously caused trail erosion for a distance of about 60 feet. We figured out where the water is coming from and what it's doing. We installed a water bar early enough in the flow to (hopefully) stop the damage from continuing down below. The water bar is well-done, not a trip hazard. This was in an area near the junction of the two trails.
h. Puncheons:
i. Some 250 feet of puncheon were scraped clean because they were all a serious slipping hazard. Those puncheons were seriously slippery and a cause for concern. They had been that way for so many years. We scraped them clean (no small job) and amazingly, they dried up within a short period of time. We noticed we could then walk on them without tip-toeing carefully, worried about slipping with every step. The puncheons up above North Fork Boulder need more of this – we didn’t have enough time to address the incredible amount of debris and moss that are growing on that long stretch of puncheon, but they are definitely much better. We also did the same treatment to a shorter, newer one that is on Boulder Lake trail. We feel like this will make them safer until such a time as they are replaced (which **needs** to happen – especially on the ones south of South Fork Boulder, they are incredibly deteriorated).
ii. One puncheon had a huge, dangerous hole from two planks being damaged. We replaced those two with planks we found from nearby newer puncheons.
i. Mud mitigation: several of the drainage cleanouts addressed this, but in one 10 foot area we bagged in rocks to make a nice, dry path where it was nothing but squishy mud. This was between the junction and camp.

2. Boulder Lake trail from the junction with Appleton Pass trail:

a. Brushed both sides of the trail up to where the brush started getting sparse (this was before the snow which was about ¼ - ½ mile below the lake, and there also wasn’t much to brush in the first ¼ mile above the junction because it’s all moss. So I would guesstimate we brushed about 1.5 miles on this trail.
b. Raked much of the trail, but not all (ran out of time).
c. Re-benched several places where the tread was falling sharply off. One spot in particular, right before the last creek crossing, where the huge Doug Fir with the rounded base sticking out into the trail, got focused attention because it was dropping sharply off and it would be dangerous to fall there.
d. Hand lopped when the brush got sparse
e. At least 4 places got solidly repaired due to tree damage or hiker damage as a result of trying to get around trees.
f. All trees cleared.
g. One tree was not cleared but rather notched deeply with steps. This particular tree is about 35” diameter and, by our analysis, would have been a serious slide hazard had we chosen to cut it at this point. We feel like it can be done later when the tree has had more time to settle into its place, and also when we can dedicate the day that might be necessary to do it right. This is approximately ½ mile up from the junction.

3. Olympic Hot Springs trail from trailhead to Boulder Creek campground:
a. All trees cleared on our hike out, no small feat given the loads we were carrying.

So, in short ... the trail from the Olympic Hot Springs trail to about 3100 feet on Appleton and about 3700 feet on Boulder is in great shape. I cannot speak to what was under the snow when we were there.

CAUTION: footlog over S. Fork Boulder Creek on the Appleton trail has rotted off one sill. And the entire log is deteriorating badly. Please use great caution. One person at a time. 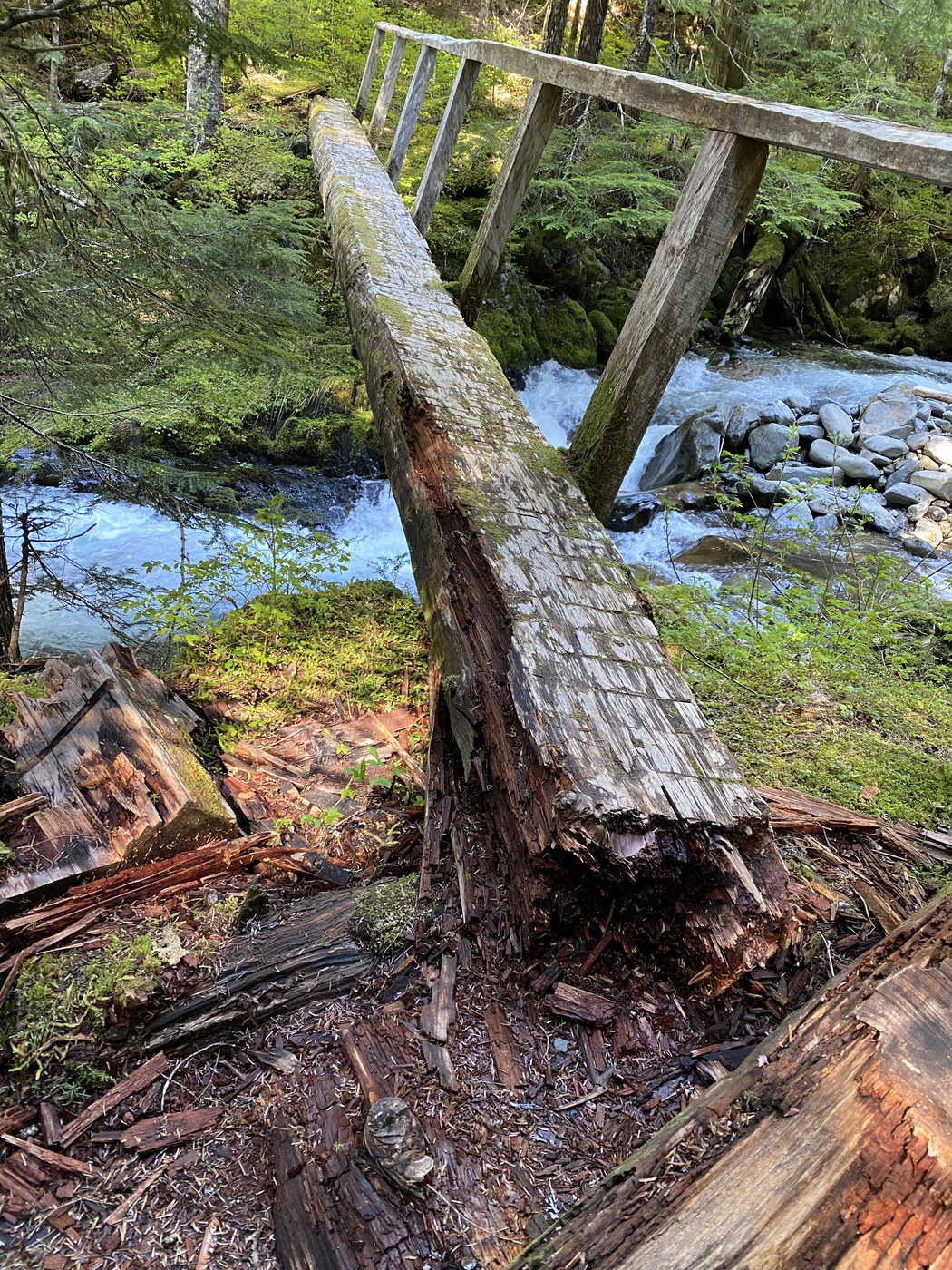 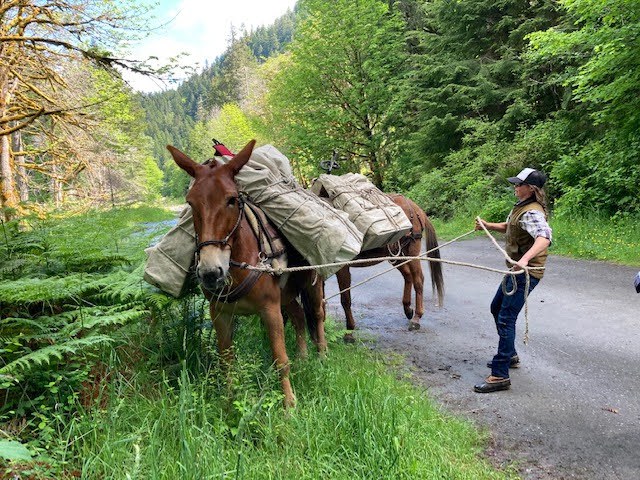 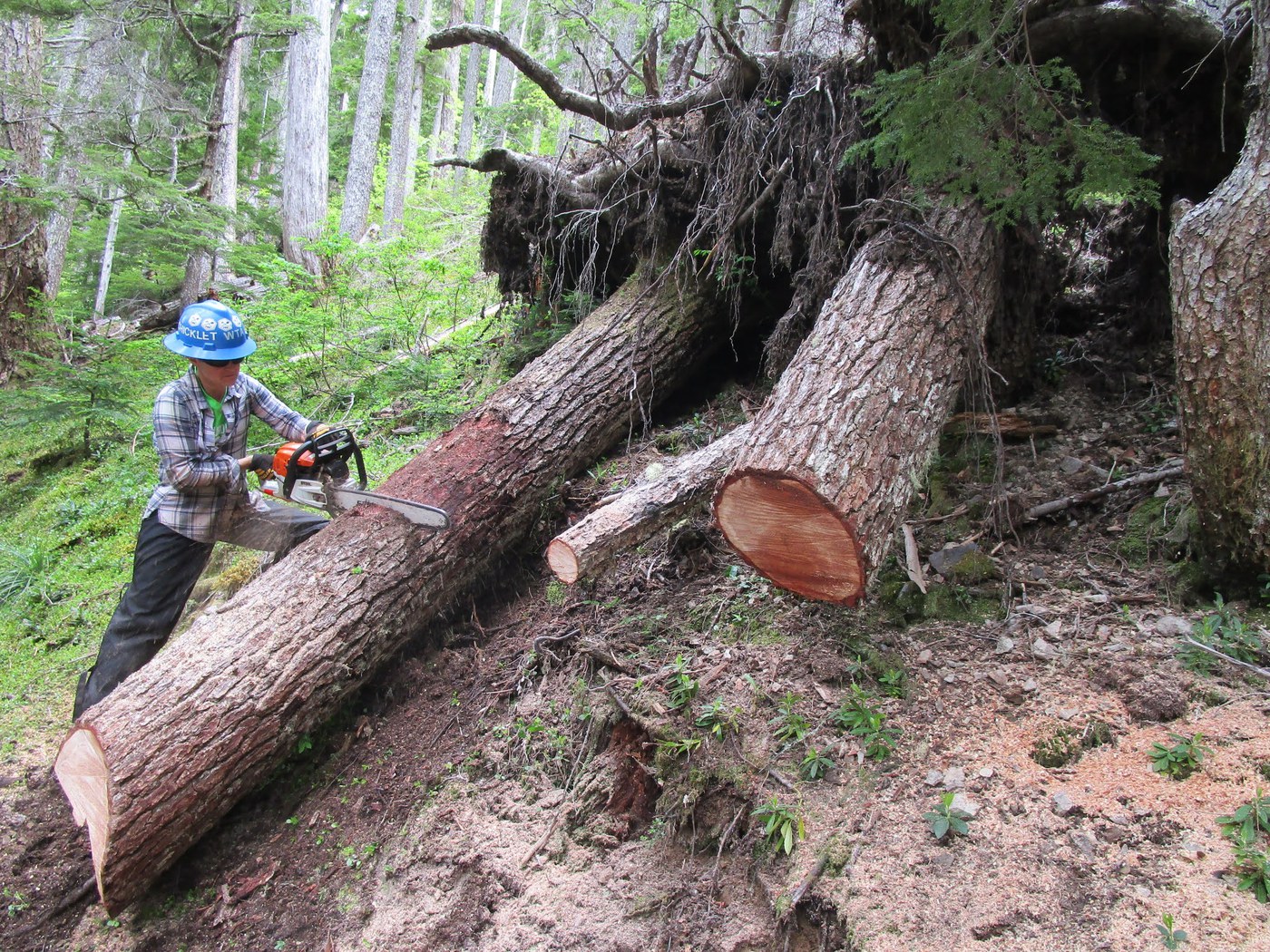