Skip to content
Mount Townsend, Dirty Face Ridge, Little Quilcene River *This is from the Little Quilcene Trail accessible at the Tubal Cain Trailhead from Sequim. It turned out to be 6 years until I returned to repeat this trail but it was totally worth it!  I ... https://www.wta.org/go-hiking/trip-reports/trip_report-2021-06-21-8255181595 https://www.wta.org/site_images/trip-reports/2021/tripreport-image-2021-06-21-8256779687/@@download/image/Mount Townsend Via Little Quilcene Dirty Face Ridge 2021 (15).JPG 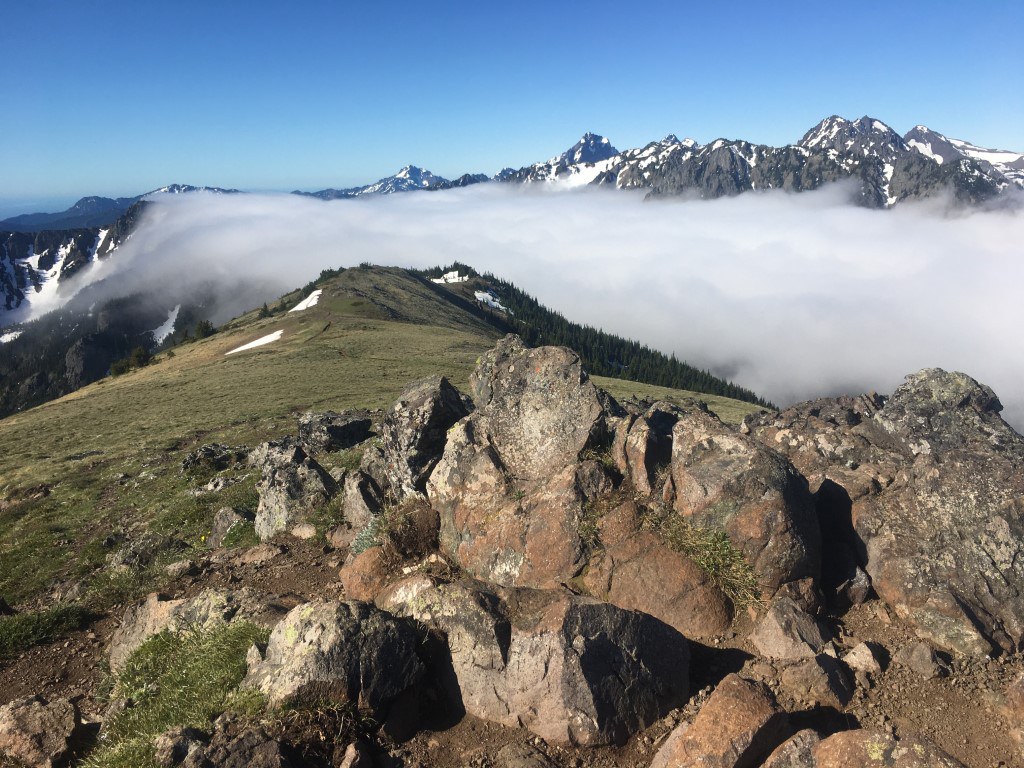 *This is from the Little Quilcene Trail accessible at the Tubal Cain Trailhead from Sequim.

It turned out to be 6 years until I returned to repeat this trail but it was totally worth it!  I arrived at the trailhead around 5:15am with 15 cars already in the lot, most likely camped over night on the Tubal Cain Trail.

I walked up the road a few hundred feet and turned steeply up the rocky slope at the Little Quilcene Trail.  Shortly after is the forest service sign that lets you know that the trail is a 35-40% grade (compared to the Little Quilcene Trailhead side that is "only" 15-20%).  Wahoo, good reason to start early!  The first half mile is forested and popping with the pink hues of rhodies in contrast to the lush green understory fed by an unnamed stream flowing down from the ridge (this is the only water source).  There is evidence of trailwork (I don't remember from a last time) such as check steps that offer steep steps instead of sloughing tread.

At a half mile up the forest opens up slightly and there are peek-a-boo views of Iron and Buckhorn Mountains. Paintbrush, Vanilla Leaf and phlox begin to line the path and moss drapes delicately on the trees.  The trail is narrow and follows the contour on loose soil, I had to watch my step so as to not have a foot slip off the edge.

Little Quilcene takes a turn at .8 miles and begins to climb up to Dirty Face Ridge on its west side.  I could continue to see views into Olympic National Park and my destination of Mount Townsend. Reaching the ridge at 1.5 miles, the forest was lighter and the terrain became more rocky with volcanic activity.  A viewpoint soon offered a panoramic view to the west and a place to catch a breath!

The ridge undulates here over ruddy outcroppings spotted with hardy flora, I spied the wild onion someone had showed me on my first hike there. Another viewpoint at 2 miles made it possible to look east at the Puget Sound with Mount Baker most prominent.  Light early morning clouds flitted on the summit of Mount Zion.  I have gained 1830 feet in elevation so far!

I arrived at the junction of Little Quilcene at 2.2 miles and 5,230ft were it comes comes up from FR 2820 and the Mount Townsend Trail at 7:15am seeing my first hiker for the day. I passed him as he stopped for a break and he passed me a little later at a much faster pace than I was going. I spied a shaving of a recently cut log, looks like the forest service has been up to keep the trail in shape.

The trail continues to open up with views into Olympic National Park and I passed by the Buckhorn Wilderness sign at 2.7 miles in.  Still on the west flank, the trail alternates between open slope and subalpine forest before taking a switchback at 3 miles to gain the northern end of Mount Townsend.

At 3.1 miles there is a junction marked with a piece of wood nailed to a tree (the sign that said Mount Townsend is gone).  I opted to take the left hand turn like we did on my first visit and go directly up to the north peak at 3.2 miles in and 6060ft. The clouds were sparse and I could see Mount Deception, Mystery and Grey Wolf to the west, all familiar from our Grand Loop backpacking trip.

I had this viewpoint to myself before taking the scramble boot path up to the summit itself and traversing the long, meadowed summit.  "The Mountain was out" as they say, Tahoma was standing proudly just to the left of the summit I was headed for.  I was a little surprised to see quite a few tents with rain flies drying out on the rocky prominences.

The summit trail was intersected by the Mount Townsend trail about half way along and a spur headed straight up to the summit but I continued to the far end where the trail comes up from the south and then turned up towards the summit making it 3.8 miles and 6260ft in elevation around 8:15am.  There was only the one hike who has passed me earlier, otherwise I had the summit to myself.  I could see more tents along the ridge down to the south with Mount Constance and The Brothers providing a backdrop.

I watched the low clouds swirl around the valleys on both sides and gently glide over lesser summits and ridges for roughly 45 minutes, marveling at how far the eye can see around the state from this vantage point. There is a reason this a popular spot just a short distance in from the road! Around 9am, though, it was time to go as the people and dogs began pouring up from the south.

The trek down was uneventful, staying on the ridge longer but dropping down on the Mount Townsend Trail rather than the north peak spur.  I only saw one other person on the way down, a trail runner that I initially mistook for a snorting bear due to the amount effort he was exerting on the steep incline.

The parking lot has twice as many cars when I returned, it was a Sunday and Father's Day to boot.  All but two groups were heading to Tubal Cain and I felt sorry for those just beginning the slog up Little Quilcene at 11am in the hot sunshine. Hopefully they had plenty of water!

For more pictures and GAIA, see link below. 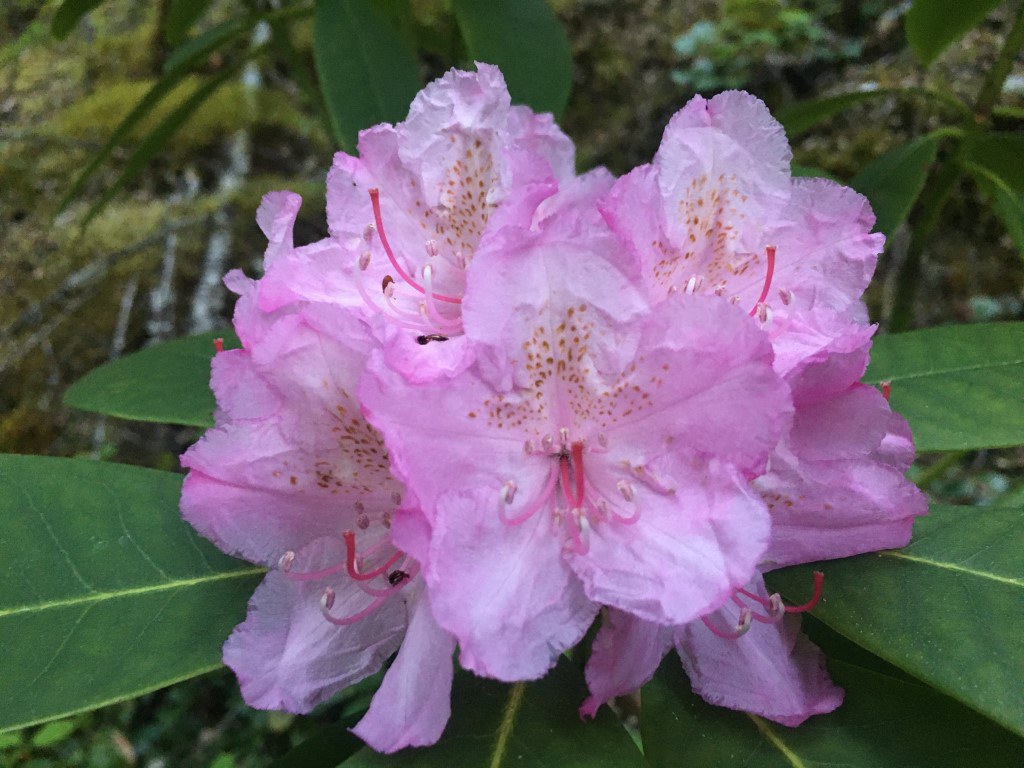 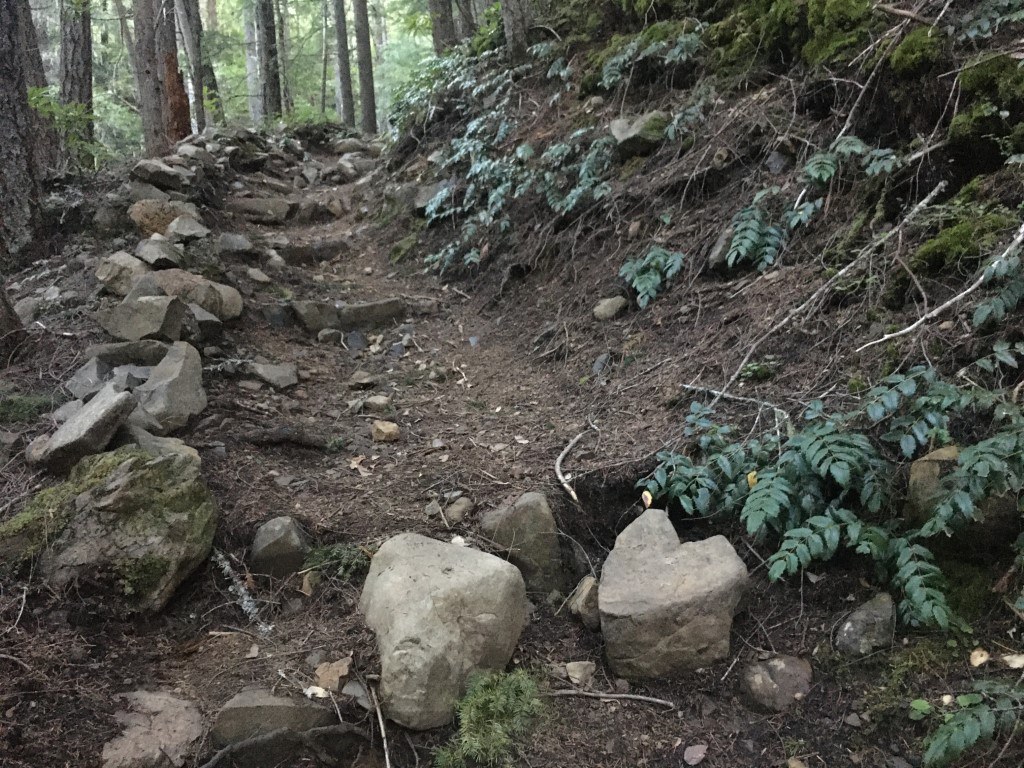 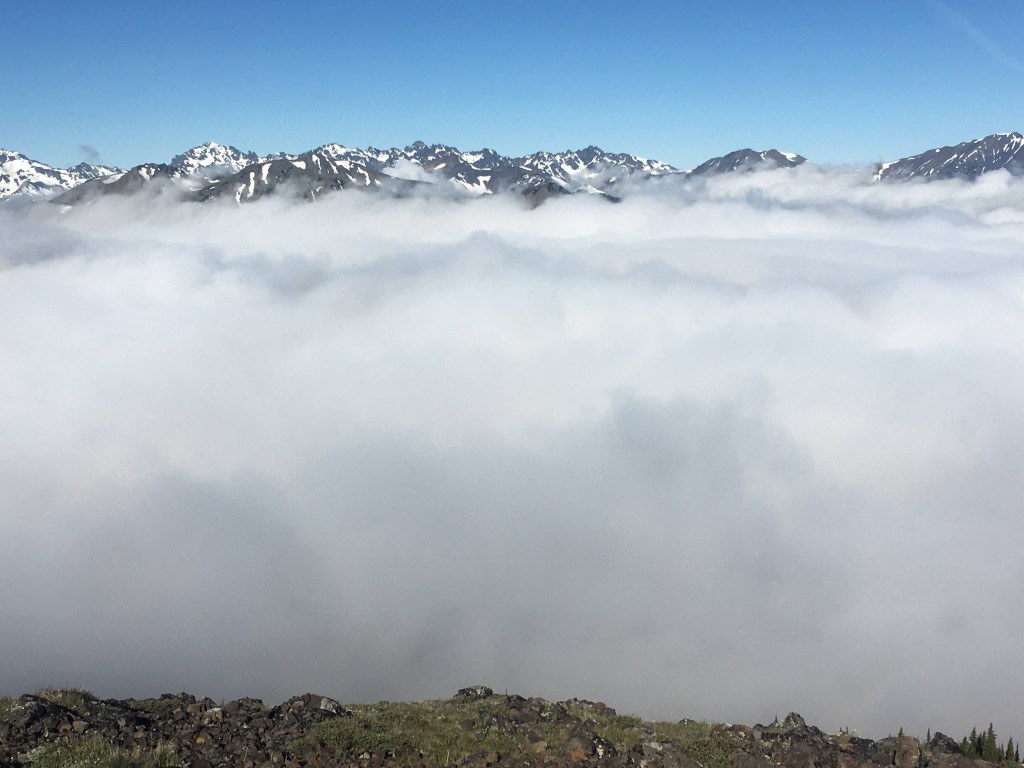