Obstacles on trail:
Trees down across trail,
Difficult stream crossing(s),
Bridge out.

Sunset from summit of Mount Hinman

There are various difficult creek crossings. The three most challenging ones are Hour Creek, the creek before Cone Mountain and the creek after Cone Mountain. It would definitely go over the top of your boots. On the hike in, I used various logs and rocks to keep dry boots (which succeeded), but on the way out I put on trail runners and just walked through everything. It's lovely to not care about wet feet ;) .

The last 2 mile or so still has some snow, but it is not a lot and the trail is easy to follow. The snow is all in more flat forest areas. I saw horse tracks turning back here. There are a few logs down as well (the earlier parts have been logged out).

The crossing of Waptus River is pretty challenging (I'm a bit over 6ft). It's not much deeper than later in summer, but the flow is much stronger. I used one hiking pole, but I should have brought 2 poles for sure. On the way out the water was even higher due to strong winds and afternoon melt. I can definitely see accidents happen here with high water, though you probably wouldn't drown if you loose your footing. On the return trip I met some parties heading in for the weekend, but all were pretty tall and solid man (and a dog).

Camp sites are melted out (but only accessible to those who dare to cross the river) and the first section by the lake is melted out as well. Some snow at the end of the lake, and then closer to the PCT bridge the forest is more open and this is also melted out.

The remainder of this report is off trail until the return from Dutch Miller Gap. It can be pretty dangerous this time of year with high creeks, steep snow, melting lakes, holes under snow etc.

I left the trail just before the PCT bridge and immediately stumbled upon a bootpath that I kept following. It is faint here and there, but possible to follow with a bit of searching. I had read online to stay "south of Shovel Creek", which looks a bit implausible on the map, and I wasn't sure how literal to take those instructions (ie maybe only later?). I was particularly confused when the bootpath started climbing up the ridge south of Shovel Creek, where there is only very steep terrain down in the gorge according to the map. However, it worked wonderfully with only a short doable descent into the gorge. It turns out that the instruction should be followed literally.

This time of the year the Shovel Creek gorge section to the lake is pretty tricky due to giant boulders and running water under the snow. I navigated carefully looking for open spaces, exposed boulder bits and poking around with my ice axe. I also read reports of people getting hurt later in year here, probably due to messy boulders.

The waterfall before Shovel Lake was partially covered by a big snow field and I had to climb up that field to reach the outlet area. I put on my crampons here and kept them on for the remainder of the trip.

The traverse east of Shovel Lake was not pleasant. The lake is partially melted and the snow around the edge had broken off creating steep snow banks. If you would slide into the lake it would be nearly impossible to get out quickly enough. The snow traverse around the lake is steep, but with crampons and ice axe it was doable. I definitely proceeded with a lot of caution here. Here the damage of this winter really became visible with various sizable broken trees in avalanche paths.

The climb to the Hinman/Daniel gap was straightforward with easy snow and no significant terrain challenges. There was evidence of some very large and unusual avalanches coming down from Daniel.

At the gap it became clear how windy it was going to be later!

I descended to the glacial lake below the Hinman/Daniel gap and filled up on water there. I then proceeded to the beautiful partially melted glacial lakes on the NE arm of Hinman. From there the climb to the summit is a long but straightforward ascent. The wind was increasing quickly in strength and I was getting a little concerned about finding cover on the summit for the night!

Close to the summit I ran into a couple of mountaineers setting up a tent. They were doing an Alpine Lakes high route that sounded wonderful. We didn't talk in the morning but it must have been a very windy night for them too.

At the true summit of Hinman it was hard to even stand up and the windchill was brutal. I quickly put on three hats, three jackets, gloves etc and started digging a snow shelter just below the true summit. This was fairly successful in shielding myself from the wind. It was hard to take any pictures though because I really could not stick my body out for too long. I held up the camera while lying down in my shelter and managed to take a few photos. I slept very well though :D .

The next morning I followed the easy snow to the La Bohn Lakes. The final sections close to the lake are a little steep but with crampons and ice axe it was fine.

Sadly it was cloudy, so pictures from this section aren't great.

Chain Lakes had some blue puddles only at the edge. Otherwise everything is snow covered here. Williams Lake was more open. Around Williams Lake there was again evidence of large unusual avalanches.

I was a little bit concerned about the terrain to Dutch Miller Gap, but the creek was easy to cross and the ascent was straightforward and not exposed.

The descent to Lake Ivanhoe was a little spicy with some open holes etc and the traverse down to the lake is pretty steep terrain.

Lake Ivanhoe was also partially melted, but it didn't have snow cliffs, so it wasn't as dangerous as Shovel Lake. This will change quickly of course.

The Dutch Miller Gap trail is melted out on the switch backs, but the traverse section has a lot of snow still and also some unusual avalanche that occurred this winter. I found this section a little harder than expected and I wouldn't do it without gear like an ice axe and traction. There was a steep creek gully to navigate.

When I stumbled upon Chief Creek I realized that there is no bridge and it was running very fast. I swapped into my trail runners for the crossing and it worked out okay. It is not deep, so not much can really go wrong, but the flow is very strong.

Except the Waptus River crossing that I described earlier already the way out was uneventful. 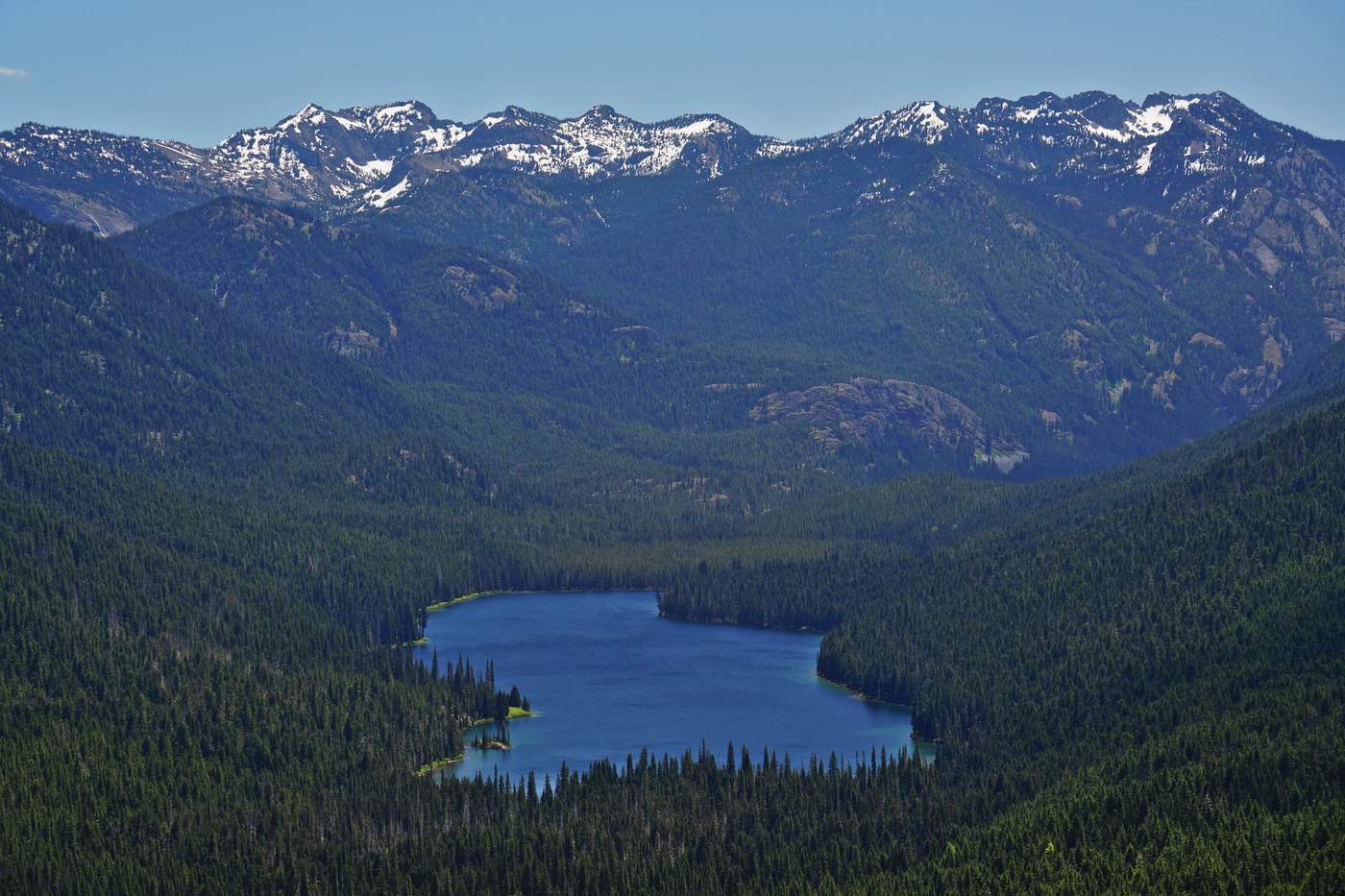 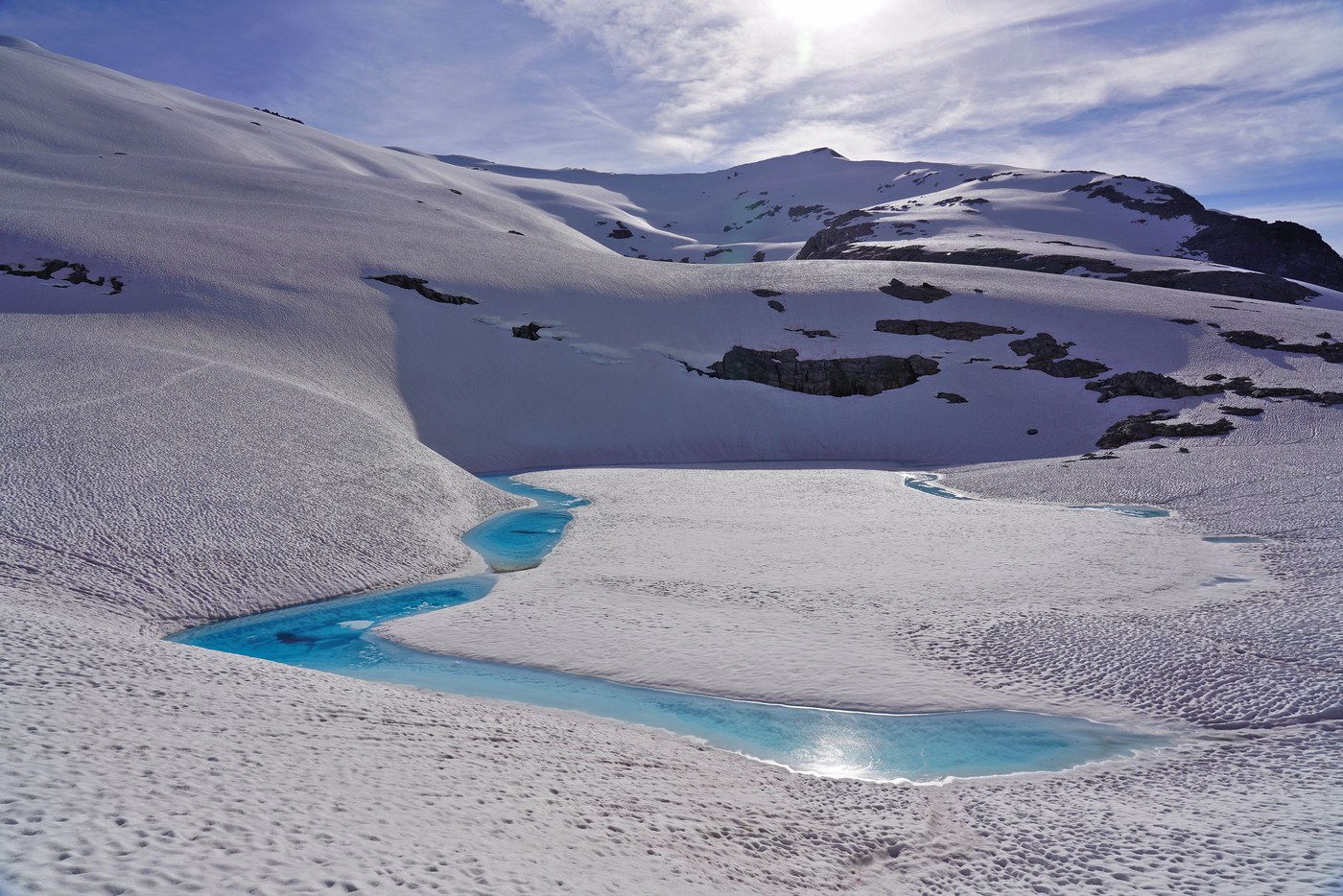 One of the partially melted lakes 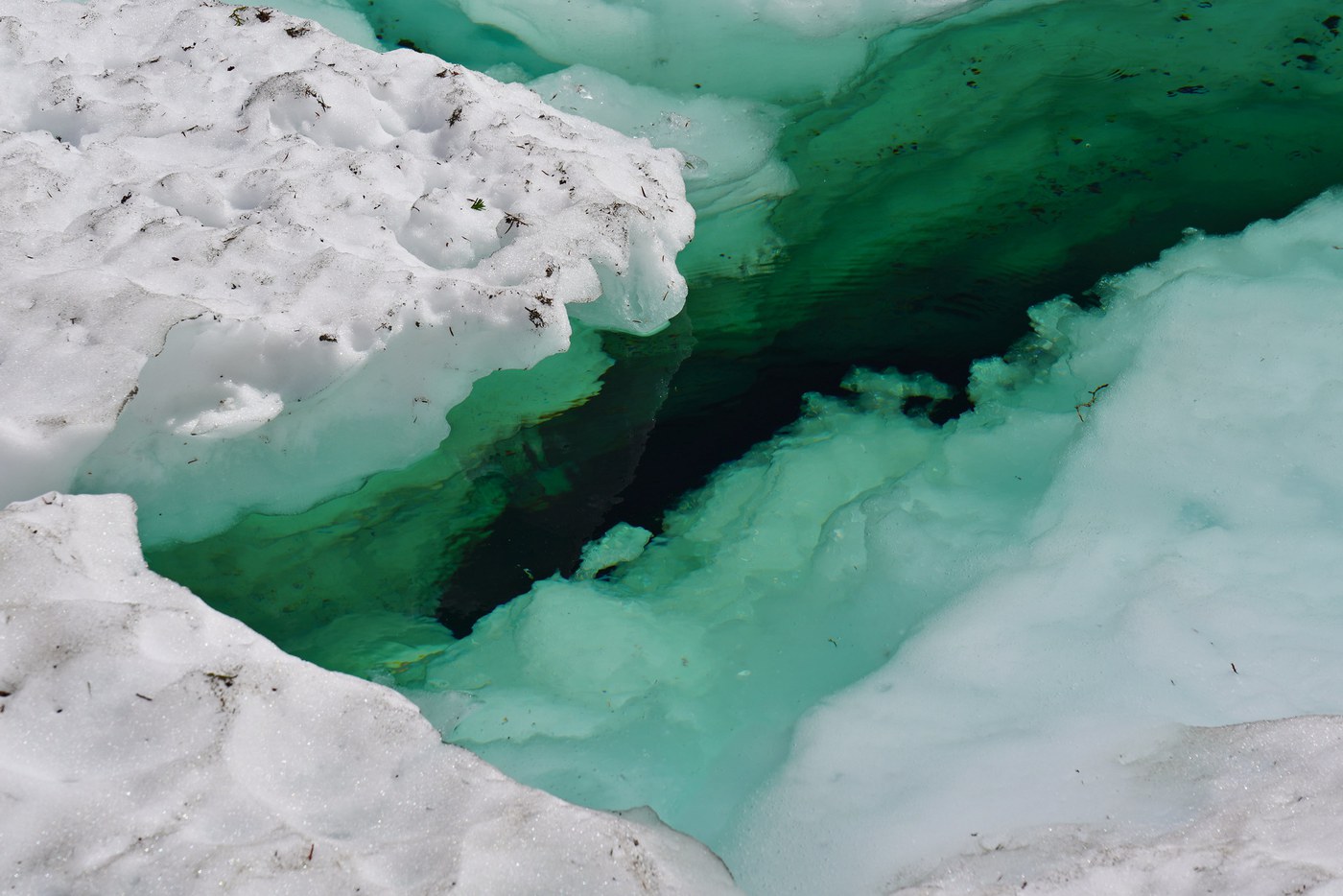