Skip to content
Deer Park to Maiden Peak, Grand Ridge, Grand Valley via Grand Pass Trail, Lillian Ridge, Moose Lake, Cameron Pass, Cameron Creek, Three Forks A couple weeks ago, a friend and I headed out to do a loop I've had in my sights for years. We ended up abbreviating the loop I'd originally planned, but we still had a great time, and got to the ... https://www.wta.org/go-hiking/trip-reports/trip_report-2021-08-04-5356821351 https://www.wta.org/site_images/trip-reports/2021/tripreport-image-2021-08-04-5361499127/@@download/image/Lillian Ridge.jpg

Trail difficult/impossible to navigate:
Trees down across trail,
Muddy or wet trail,
Overgrown in places. 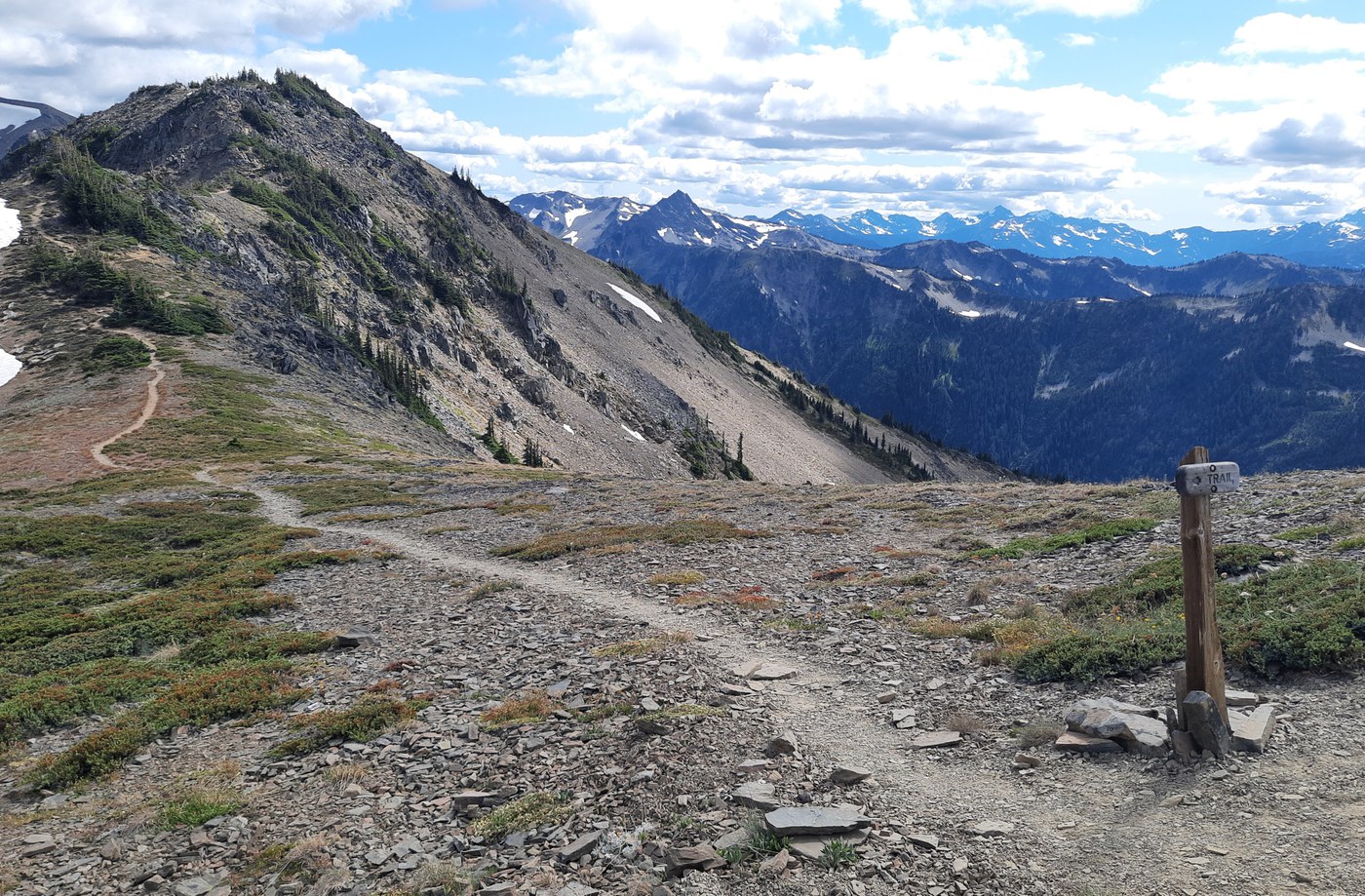 A couple weeks ago, a friend and I headed out to do a loop I've had in my sights for years. We ended up abbreviating the loop I'd originally planned, but we still had a great time, and got to the main attraction (Cameron Basin) so I'm counting it a win.

We started off from Deer Park and headed towards Obstruction Point. A quick aside -- since this is a loop you can do it either way, but I think counterclockwise is best because you hike towards the views of the Olympics this way. Otherwise you're down in a creek valley at your freshest.

The Grand Ridge trail is good for the most part. That said, there are a couple of very steep areas near Maiden Peak and the tread is not great, but not awful (we are two hikers who don't love exposure). We had trekking  poles, which I was happy to rely on. As with almost every hike I've done in this area, there was cloud cover creeping in on the north side, so we couldn't see the Strait, but we had gorgeous views of the Olympic mountains!

We took a snack break at the Obstruction Point trailhead and then headed up Lillian Ridge. This was my favorite part of Day 1 -- excellent views and didn't have to worry about a false step sending me tumbling downhill.

Soon Lillian Ridge starts heading downhill towards the lakes. This descent was rough on my knees but still quite pretty. We saw a lot of people heading up at the end of the day. Whew. Seemed tiring.

Down in the valley, we passed Grand Lake (which looked buggy) and headed for our first campsite, Moose Lake. We enjoyed a little lakeside time with some off-puttingly unafraid deer, and then got dinner started. While we felt all alone at the lake when we got there, a fair number of hikers showed up at dusk and I think every site was taken by the time the sun set.

We got a lateish start since we only had about 6 miles to go to our next camp (Upper Cameron!!). This was a beautiful day, scenery-wise. From Moose Lake the views just kept improving. The basin past Gladys is really striking and gorgeous. But because it starts climbing almost immediately, it was a little hard for me to get my stride. Luckily, despite a steep climb to the pass below Grand View Peak, it was relatively short, and we dropped packs at the pass so we could take a side trip to Grand View (totally worth it -- 0.3 miles to a stellar 360-degree view!).

At the top of the peak, we looked at Cameron Pass and tried to ID Gray Wolf pass. We needed to cross both the following day and weren't sure of snow coverage so being able to see them helped get a sense of what we needed to do. We also got some info from a ranger we encountered on the way down; he said that the trail up Cameron was decent and Lost Pass was fine, but didn't have in-person intel for Gray Wolf.

The descent from Grand View into the creek valley was pretty rough, but man I was glad we were hiking downhill instead of up. The trail has a couple trees across it but nothing too hard to clamber over or under, and the ranger had pruned away branches that would have made it harder, which was a huge help.

The Cameron Creek trail was pretty good until what I think was the last 3/4 of a mile -- at this point it gets really brushy (like, REALLY brushy). Some sections that got brushed out by the ranger we saw but mostly it is just...leaves. Everywhere. Luckily you can still see the tread, so it's not treacherous just...moist.

Cameron Basin was great when we got there. There are more campsites than there seem to be, you just have to go back to the far end of the basin for some of the other sites -- we found a perfectly suitable one, but when we went to Cameron Pass later that night we found the others, which were better and larger.

After chilling out at camp and getting eaten up by bugs, we took a little stroll to the base of Cameron Pass. As we got closer, we noticed that the trail up Cameron had a big washout crossing the trail that looked pretty bad to cross, particularly with packs on.

After seeing this washout and reviewing our anticipated route on GAIA in camp we decided to shorten the loop. We didn't have great beta on Gray Wolf and didn't particularly want to do a ton of riverside walking on trail we didn't know the conditions of (e.g., we weren't trying to brushbash for 14 miles), we decided to head out the following day via Cameron Creek.

This was the worst day for scenery, but overall a better hiking day than I had anticipated. Descending out of Cameron Basin, the trail winds through the forest alongside Cameron Creek for 9 miles to the junction of Three Forks. Those 9 miles of trail weren't particularly clear, so we couldn't hike as fast as we wanted to, (though things speeded up at the end) and the Three Forks junction was a welcome sight.

I thought Three Forks would be steep and brushy, but it's actually beautifully graded except for one short section near the top. It does not have water anywhere though, so be sure to refill as much as you can at the creek before you head up. We paced ourselves well, though couldn't hike fast enough to get away from the most annoying bugs of the trip (you know the ones that get into your orbit and won't leave you alone..those ones).

After a last, hot push in the sun on Three Forks we arrived back at Deer Park. Thankfully I had a couple bottles of water stashed in the car to refresh us.

Day 2 - Heading down from Grand View Peak. Photo by nwroth. 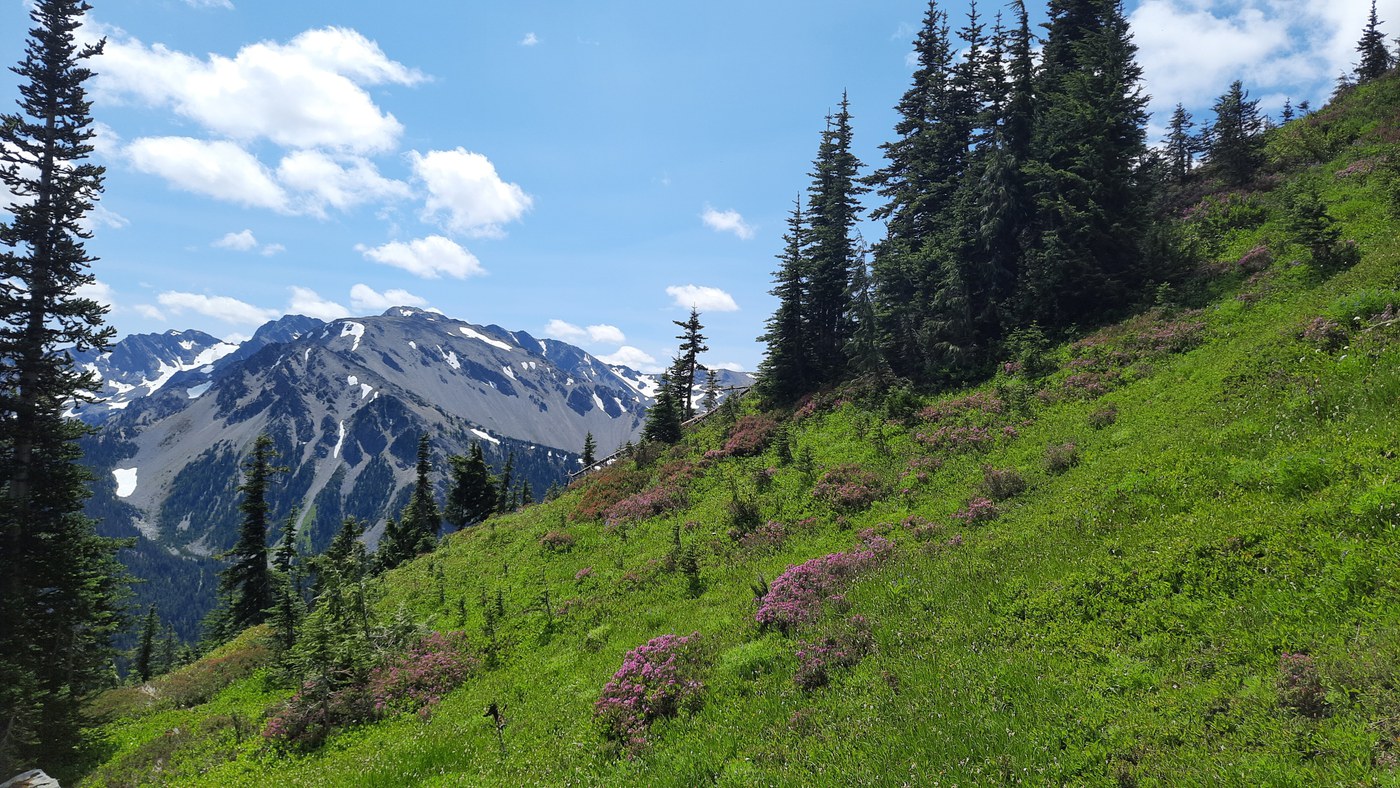 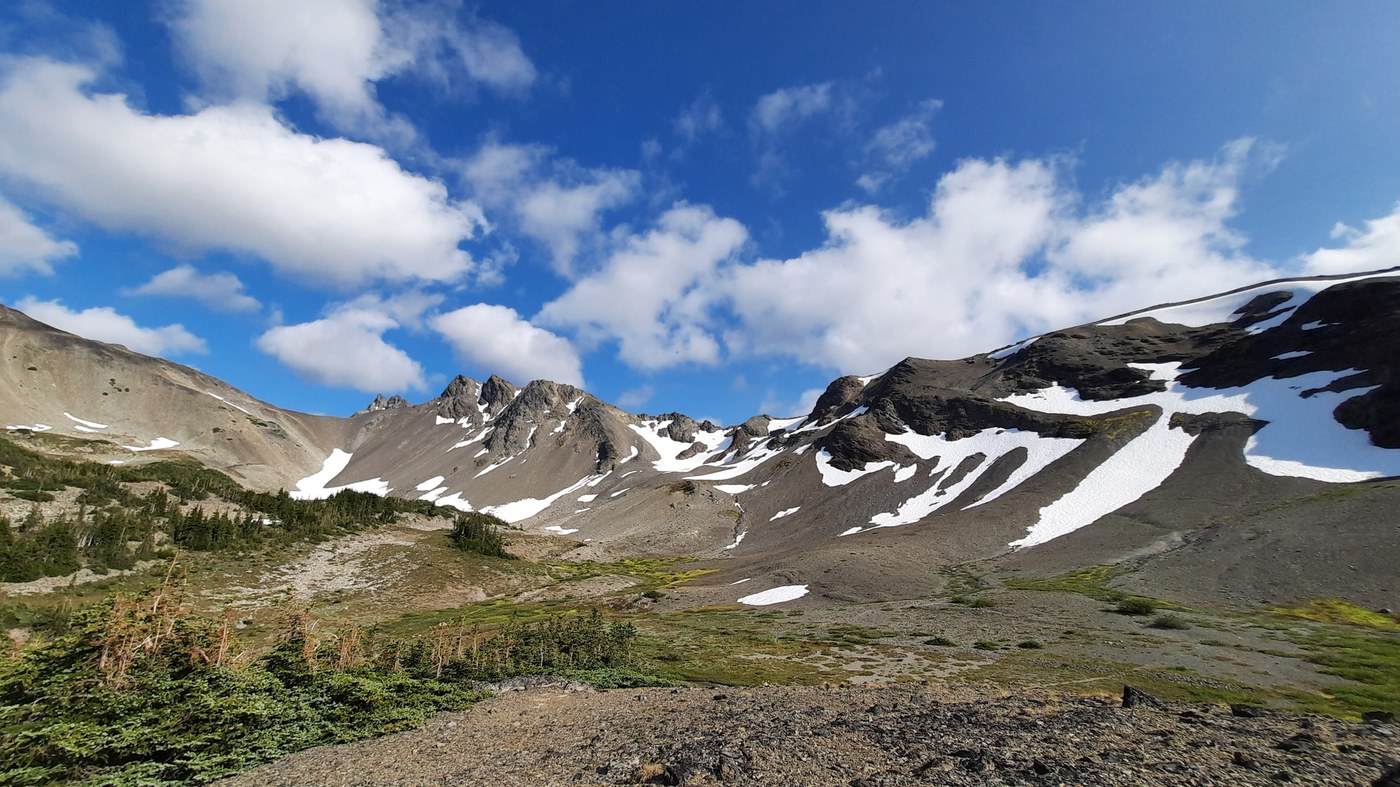 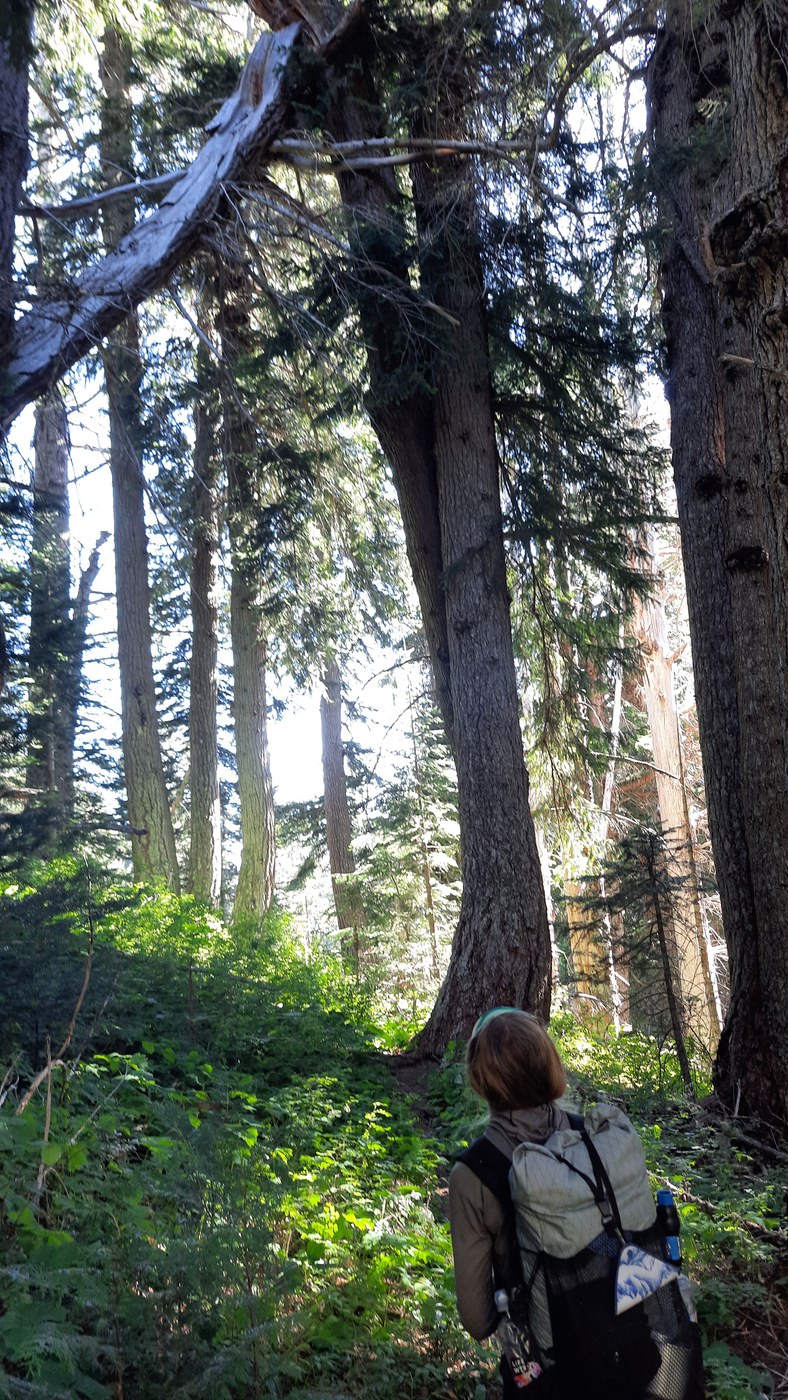