Print
Beargrass and sunset(ish) in Appleton Pass. Photo by nwroth. 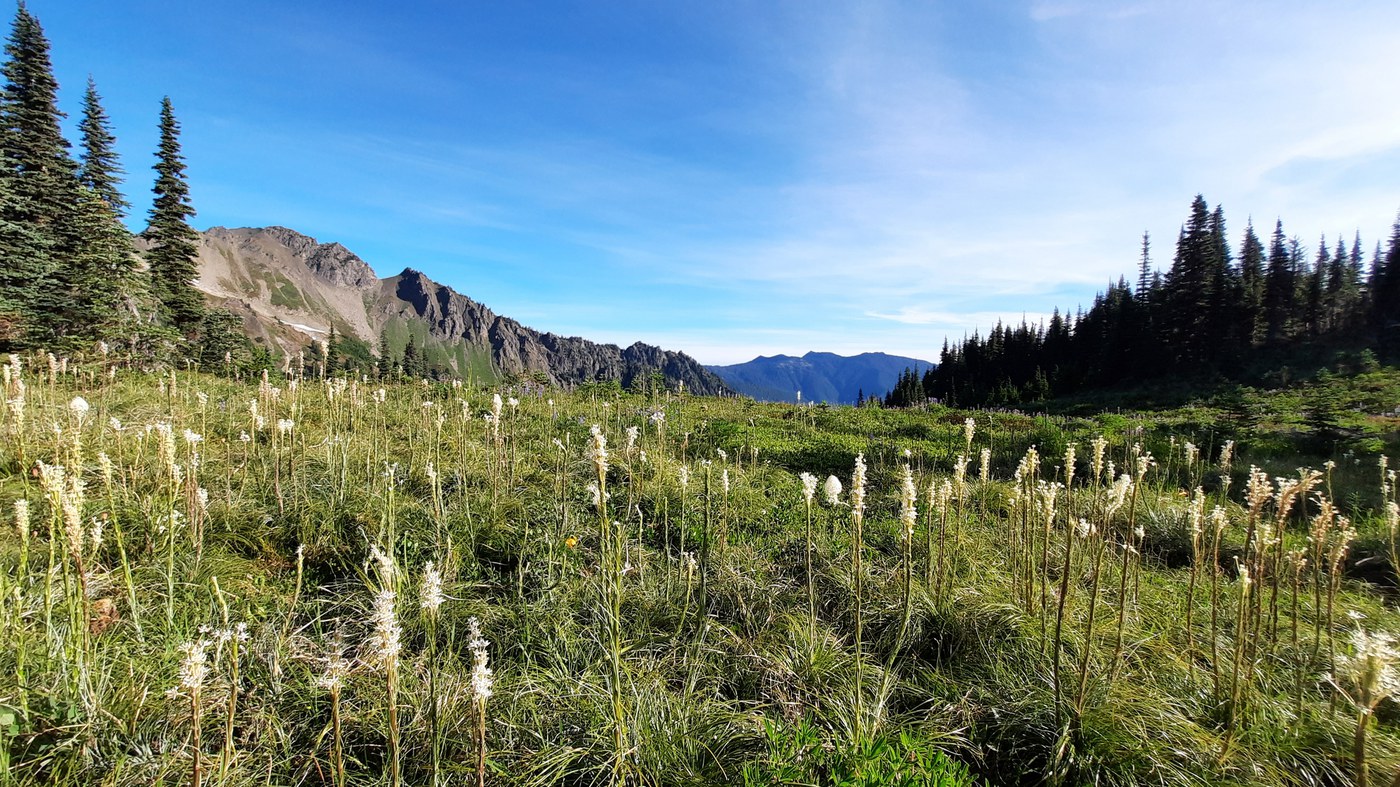 Thanks to a heads up from a colleague this spring, I was able to snag some Seven Lakes Basin permits after the second round of them opened up.

tl;dr - bugs were annoying in camp, Appleton Pass camp is meh, trail is in great, easy-to-follow condition the whole way 'round, it was very hot, and there are fewer good water sources on this trail than I expected.

TL;DR notes: Appleton Pass trail is steep, views from camp not that great. Aggro deer and no water at the pass. Water sources not abundant despite hiking near water for most of this section.

Narrative: I got to the trailhead at 12pm and set off after circling the lot once and getting lucky by finding a spot when I pulled up behind someone leaving. I have no idea how many people park here for the day vs. for overnights, but this lot feels like a great candidate for a shuttle from the campground or resort -- it could cut down on people driving to the trailhead and ease up parking demand.

I was going counter-clockwise, so at the junction where most people turn to get to the Sol Duc Falls overlook I headed left onto slightly narrower trail. The first two miles of it are easygoing, and then it begins to climb moderately (much preferred to the elevation gain on my last loop hike.)

Of course, this moderate grade was not going to last. I had permits for Appleton Pass, 7 miles in and nearly 4000 feet higher than the trailhead, and most of that elevation is gained in the last two miles before the pass. I took a snack break at the junction, then headed up the Appleton Pass trail. I was running low on water, but the trail crosses Rocky Creek within the first quarter mile, so I refilled there. That's the opportunity for running water, and there is no water in the pass.

Appleton Pass is a steep grind, but once you make it through the second-growth forest, you pop out into meadows that continue climbing at a slightly more tolerable grade. There are berries ripening, and peek-a-boo views of Mount Olympus. But you can't see Olympus from the pass; Your best view is of Mount Appleton and the Boulder Creek drainage. There are several marked campsites available, two of them large enough to hold  more than one tent.

I made a little dinner, stretched (v. important) and enjoyed the sunset light on Mount Appleton. I was surprised to see beargrass just blooming up here; it made for a nice photo.

The deer are aggro here. One really wanted to come through my camp, and wouldn't leave the camp entrance despite my multiple attempts to scare it off with sticks and yelling.

Finally, I went to bed and read for a while, and the deer came back and stomped around the campsite a bit, probably trying to prove a point.

TL;DR notes: Climb up to Sol Duc and Heart Lake unshaded at and after Sol Duc Park; Water sources available up to Heart Lake but scarce after that; Heart Lake rules; excellent views from High Divide; Bear! Lunch Lake campsites lovely, still with the aggro deer though; flies suck at Lunch Lake.

Narrative: This was a longer day. I had about 10 miles with a lot of elevation loss and gain. First, 2 miles and a couple thousand feet down to the Seven Lakes Basin trail, where I turned right and immediately began regaining all the elevation I had just lost.

I made it up to Heart Lake by noonish and stopped for lunch. This was a really nice break after the essentially constant uphill grade from the Appleton Pass junction, made a little more difficult because most of it in the direct sun (it was so. hot. for this whole trip. Please bring us some rain).

After a refresh at Heart Lake, it was back to climbing. This time up to High Divide and a bunch of absolutely stellar views of Mount Olympus. It was really cool to see the Hoh River and the Blue Glacier and see how that trail lays on the land compared to where I was.

My ability to take any sort of good photo is inversely proportional to how hot and tired I am, so my photos from this section are not good, but it was really quite gorgeous. On your right are lakes scattered in a big granite basin, on your left the hillside drops away completely towards the valley floor thousands of feet below. So cool.

I did take the side trip to Bogachiel Peak (not worth it) and then headed to Lunch Lake for the night (very worth it). Saw a bear through this section -- he was a subadult and just kinda chillin' on a talus field after apparently chasing a baby deer (reported to me by two hikers who saw it happen). I talked to him all through this section so he could hear me, and he stayed down where he was, which was the idea. It would have been better if he'd gotten scared off but good that he didn't come closer to investigate I suppose.

It's the central lake in Seven Lakes Basin. The campsites are nice (most seemed to have space for just one tent). I snagged a nice one with views of the lake and the trail up to the upper basin, but which came with two enormous resident horseflies. Luckily they did seem to just live in camp, so I just didn't spend much time there if I wasn't in my tent. But there were a fair amount of mosquitos and blackflies partying here, too. It made lounging at the lake difficult, and forget about filtering water untroubled.

I wound up hiding from the heat and the bugs in my tent, evaluating my options for the next day, (and, honestly, falling asleep for a midday nap). I had permits for Deer Lake. I'd originally thought if I could explore the upper basin and take my time on my way to Deer Lake I could stretch this trip to three nights, but with the bugs as bad as they were, I was entertaining the idea of just leaving early. I decided to see how my lake basin exploration went the following day.

That evening, I set my alarm for 3am -- I was out here during the Perseid meteor shower and intended to get up and sit outside for a bit to watch it. But the deer here had also been aggressive in the evening, and I was a little nervous to sit outside of my tent in the full dark, so when my alarm went off, I sort of dozily looked for meteors from my tent. It was worth it -- I saw 5 in the very small window of time that I was actually conscious and not snoozing!

Day 3 - Lakes Basin Lookaround and out

TL;DR notes: Lakes Basin trail is straightforward, not a lot of opportunity to explore here without damaging the meadows; Lunch Lake privy - yikes; climb out of Lunch Lake sucks; bear?

Early on Day 3 I got up, packed my backpack with lunch and water and headed into the lake basin. I was anticipating being out until noon or so, at which point I would get back to camp, pack my things and head to Deer Lake for the night.

The trail to the upper basin is easy to follow, but there are no side trails that offer opportunities to explore (which is fine, it's a fragile area and best to stay off the meadows). But that meant that an outing I thought would take half my day wound up taking only about an hour and a half, and that was with a good long sit on a rock basking in the morning sun. I figured if I got moving I could get out to the trailhead by 2pm and be home at a reasonable time, so decided I'd hike out that day instead of have my third night.

So I took off after checking out the privy (which is clean but frighteningly full)! The climb up out of Lunch Lake basin sucks, but I refueled at an overlook before rejoining the main trail and headed out towards Deer Lake.

Only thing of note is that somewhere in the forest just below the meadows near Lunch Lake some hikers reported seeing a bear, so I spent about a mile talking essentially to myself (and, I guess also the bear). Good that I didn't see it, though it was interesting to realize that because I didn't know where it was, I didn't know when I could stop talking, and that uncertainty wasn't super fun for me. I would have rather seen it, so I could know when I'd passed it.

Not much to report on the rest of this section -- Arrived at Deer Lake at noon. It's a nice little spot, but shallower and more mucky than Lunch Lake. Decided to not camp here, and continue out that day. Trail out from Deer is pretty uneventful, though steeper than I would have expected. I came back down into Sol Duc Falls after just 1h worth of hiking -- good time considering I still had a lot of weight in my pack.

Finished the last 0.6 miles from the falls quickly and came out in to a blazing hot parking lot. No shade to be seen. I have a car with black leather interior which is no fun in conditions like that. Had to get the a/c going before I could even sit in the car. But it cooled down quickly enough and I got outta there fast in order to free up a spot for folks coming in.

Heart Lake from High Divide. The privy is tucked into the trees on the far right of the photo. Excellent view. Photo by nwroth. 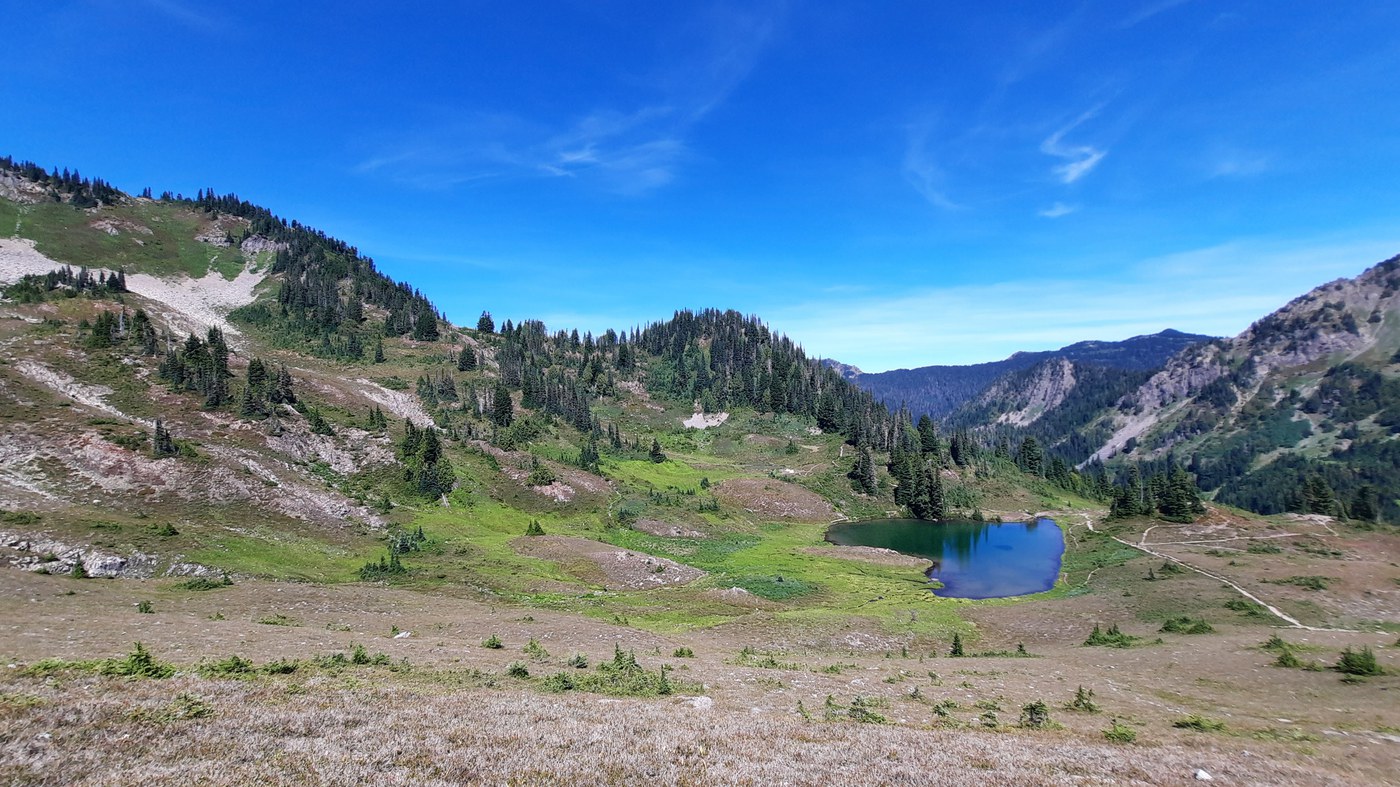 The view from my lounge rock in the upper basin. Photo by nwroth. 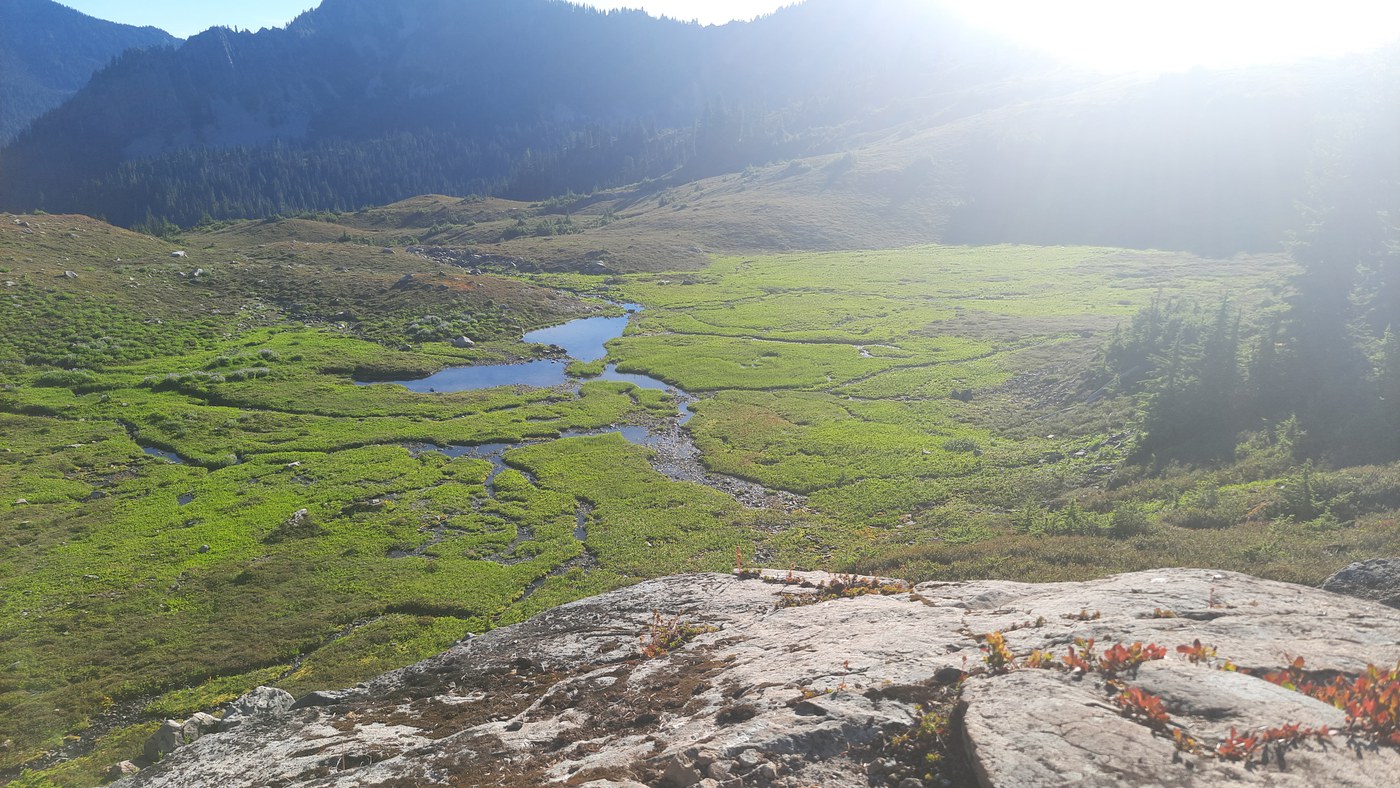 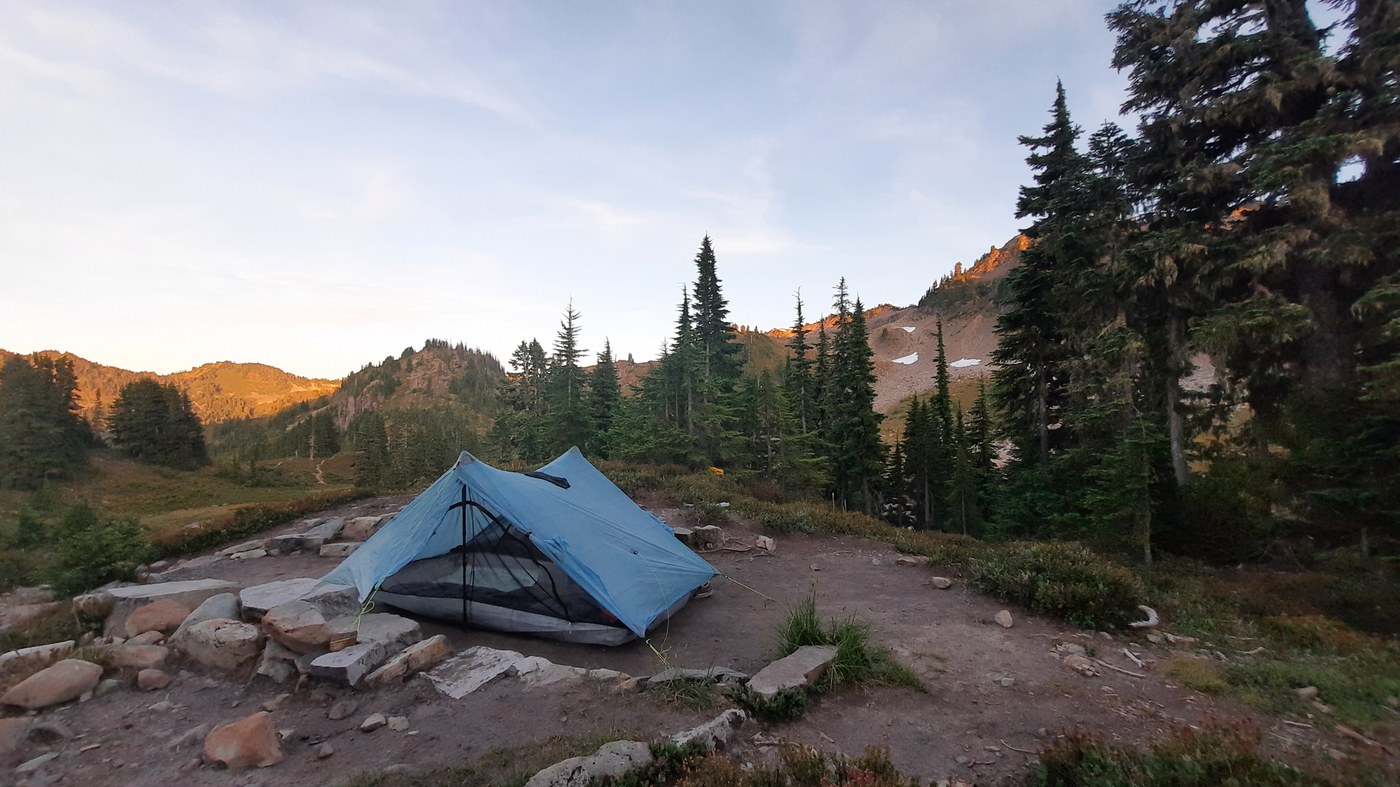