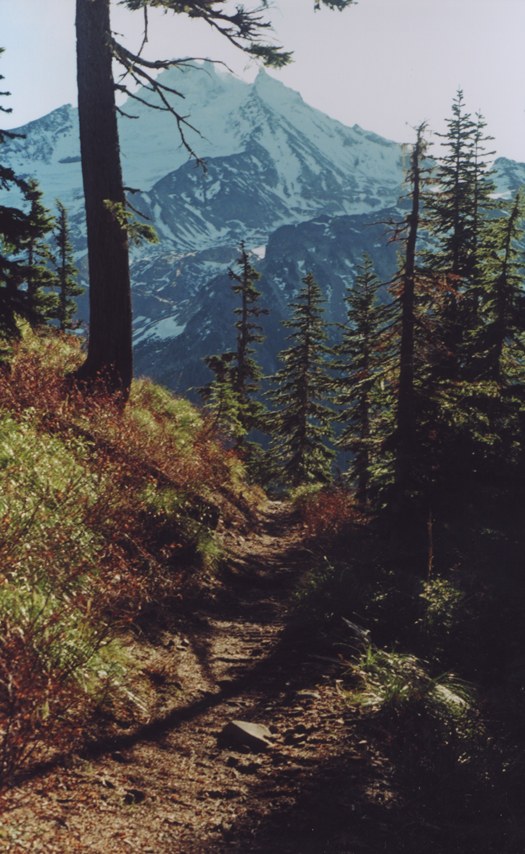 Circumstances didn't let me take full advantage of the splendid weather for the last trip of Fall. Rather than a half week in the wild, I settled for two days in Oregon's Mt. Jefferson Wilderness. The Whitewater Trail (#3429) affords ready access to pretty Jefferson Park, at the North side of Mt Jefferson. It starts at 4100 feet, at the end of the Whitewater Road (#2243), which leads 7.5 miles up from highway 22 (between mileposts 60 and 61), at a car-friendly grade. A few miles shy of the road's end, I drove around a bend and startled a bobcat, who courteously bounded into the forest, giving me the right of way. At the trailhead, there was another car, alarming me of the possibility of huge crowds, but I only saw four groups of dayhikers during the entire weekend--a far cry from the swarms of summer. Although the Whitewater Trail is the path of least resistance to Jefferson Park, the first few miles are nondescript. Initially the route climbs a modest 900 feet in 1.7 miles of evergreen forest to a point where the Triangulation Trail (#3373) joins it from the left (West). The grade goes gently up through occasional stretches of snow and improving views of Jefferson, crossing Whitewater Creek at about 5 miles. At 5.2 miles (5600 feet), the Whitewater Trail deadends at the PCT: left (Northeast) is the way to go. The next few miles are why hikers hike. I followed the sometimes snow-covered trail past scenic Scout Lake to the wide open meadowland of Jefferson Park. Snow and mostly frozen tarns and lakes dot the now brown meadows to the East, Park Ridge lies to the North, and Jefferson towers to the South. In the snowy areas and with the many local side trails, it required some attention to stay on the PCT, but I eventually arrived at a splendid snow-free campsite near Russell Lake with views everywhere and no one in sight. After a late lunch, I trekked another few miles North on the PCT to the 7000 foot pass on Park Ridge, with great scenery back to Jefferson and Jefferson Park, and views North to the expanse of lands towards Hood, St. Helens and Rainier. At this time of year, with two feet of snow covering the upper slopes, route-finding wasn't trivial. Halfway up the Sprague Lake Canyon be careful not to miss the sharp jag up the wooded ridge to the Southwest. Half a mile later on the knob, make sure you cut sharply back North-Northwest, skirting the side of the slope on the groove in the snow. After that the way trends up mostly in snow to the ridge, and was reasonably easy, except for periodic post-holing. I got back to camp at about sunset, collected some snow, broke a hole in the thin ice to filter water, and donned lots of clothes. By 5:30 it was me, my stove, headlamp, and candle lantern in the vastness of the park. It took a while to finish all the lime daiquiris, the fresh vegetable and garlic penne, hot chocolate and dessert. By then the Milky Way and dozens of gerrymandered constellations were out in force. A little later, the moon rose bright as a train headlight coming up the tracks. I stayed up till ten, stalling the last night of backpacking season as long as I could. Sunday was too bright, too clear, and too pretty. I loitered over breakfast and packing till noon, imagining all the wandering I failed to do this year. I thanked the meadows and the mountains and headed out. I guess it's about 25000 trail reports to read until next season.
Mt. Jefferson from the North end of Jefferson Park. 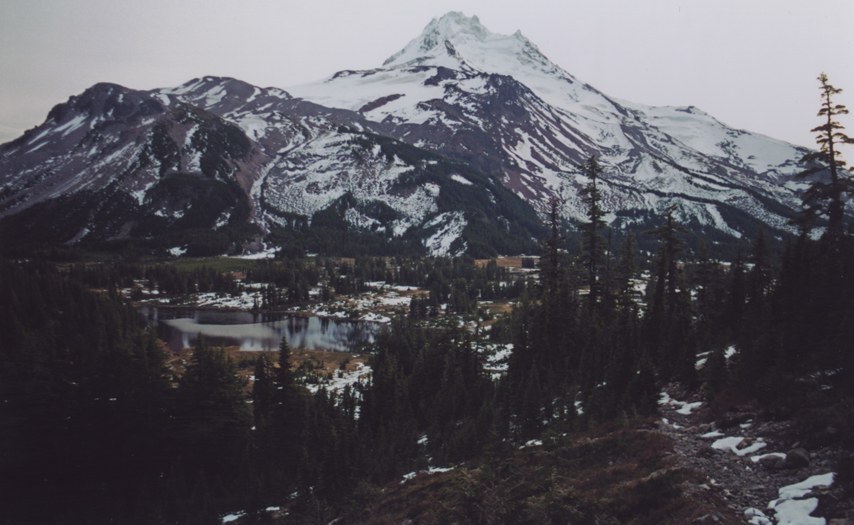 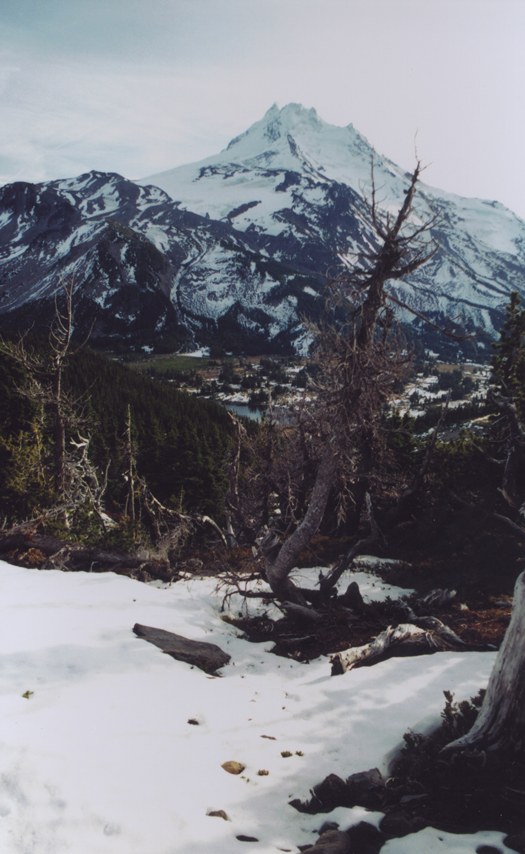 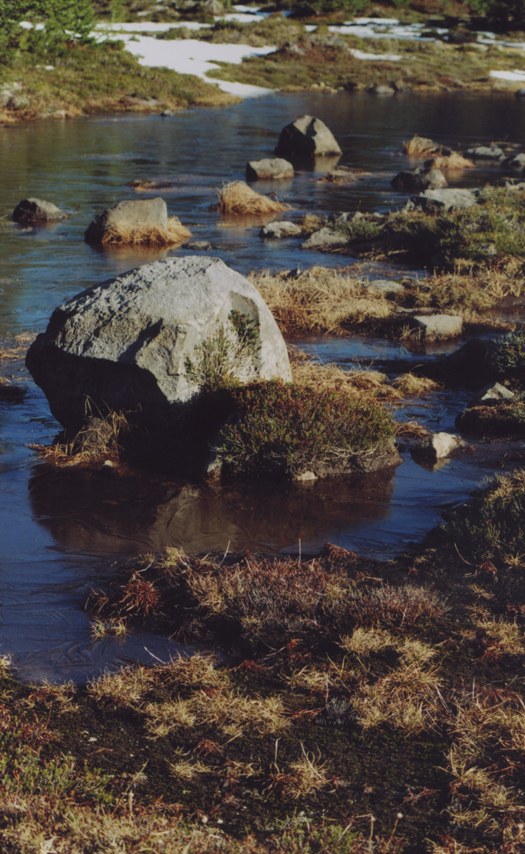