View from the top of Stegosaurus 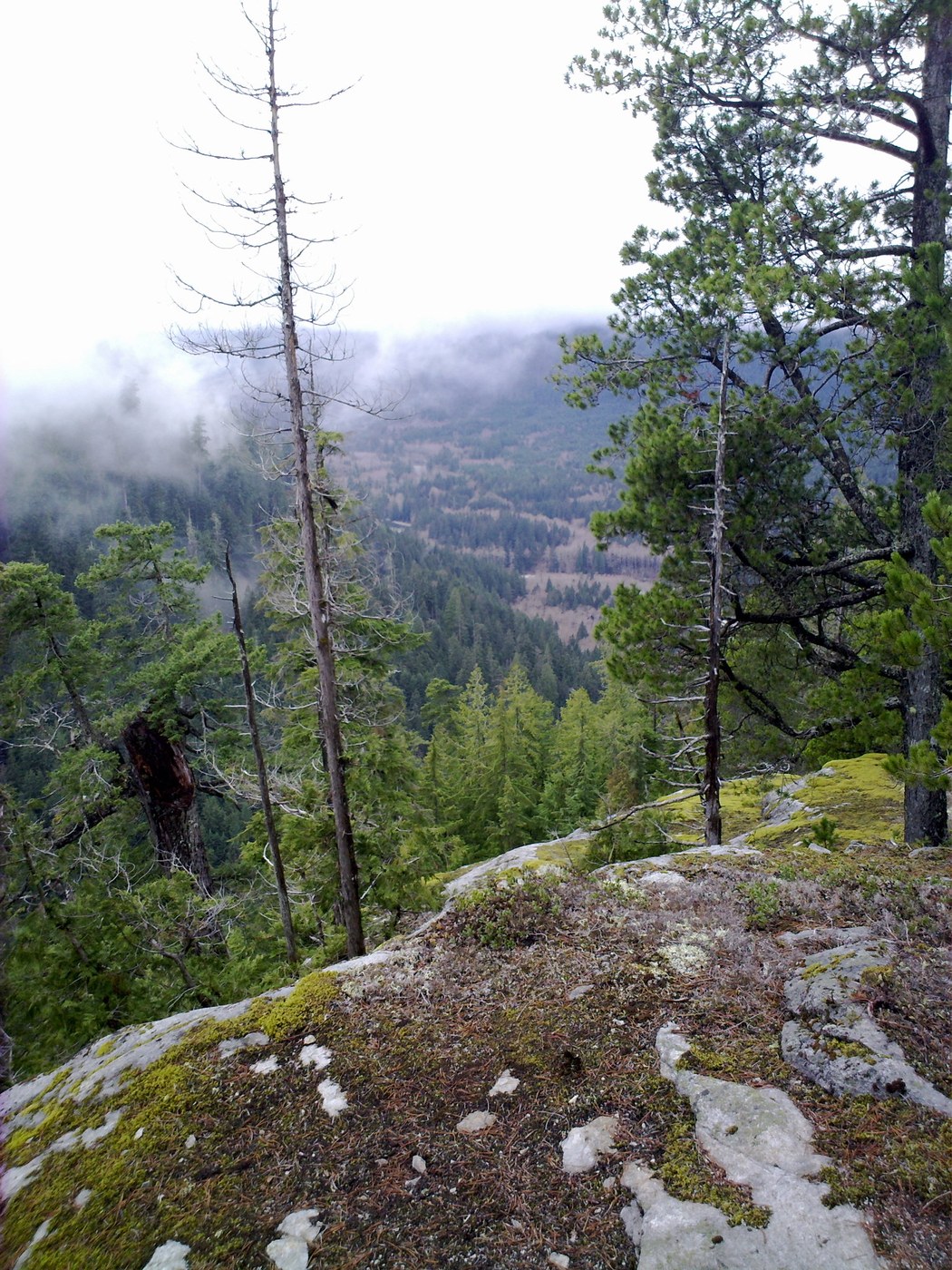 Stegosaurus Butte is a thousand foot high ridge of granite that looms over the Middle Fork Snoqualmie River across from the Taylor River valley. I spent a few hours wandering up and around the Butte on this cool misty Wednesday. The hike to the summit of The Butte is a short but challenging little jaunt which is sure to get more popular as people discover it. Volunteers have improved the route somewhat, although they haven't taken any of the steepness away from the trail. To climb Stegosaurus, park at the big Middle Fork trailhead, walk across the bridge then turn right (the main trail turns left here). Follow the rough riverside trail, a remnant of the old pack trail from North Bend, until the terrain flattens out in a hundred yards. You will see an abundance of flagging that marks the planned new trail to Pratt River. Leave the trail and follow the flagging perhaps 100 feet or so then look for a vague trail heading up the hill. Look for cut logs marking the trail. If you don't initially find the trail, don't worry--cross country travel is not too hard, just keep heading uphill toward the Butte. Eventually the path becomes quite steep where it assaults the rocky slope below the summit of the Butte. The summit of Stegosaurus is a nearly flat, forested plateau covered with a thick undergrowth of sallal. Rock ledges provide good viewpoints and sunning spots. It's interesting to see the lodgepole pines growing on top, unusual on the west side of the Cascades. The trees must be taking advantage of the severely dry microclimate up on the rocky summit of the butte. I had some time on my hands after summiting Stegosaurus, so I did another fun ramble. First, I walked back down to the point where the steep trail levels out in a lushly forested basin, then I began circumnavigating the butte. Cross country travel was generally easy in the deep, dark, and unbrushy forest. Approaching Rainy Creek, I found an old logging road and followed it up the valley. Walking the road was not too difficult despite numerous blowdowns and short brushy stretches. The huge granite cliffs on the west flank of Stegosaurus loomed above Rainy Creek, which felt like a wet and drippy version of Yosemite Valley. At length, I spotted the pass that marks the south end of Stegosaurus. Leaving the old loggin road, I did the short easy climb through open forest to the pass, actually two heavily timbered notches in the rugged ridge. I was thinking that this pass would be a neat way to reach Stegosaurus, but was quickly disabused of that notion: the south end of the ridge leading to Stegosaurus is an unclimbable cliff. This gloomy gap deserves an interesting name: how about Cretaceous Col? Sauroposeidon Saddle? Getting down the steep slope from the col to the Mid Fork trail was tricky. Thinking the terrain was gentler to the east of the Butte, I wandered east along the ridge to a third pass, attempted to descend, and was stopped by cliffs and brush. I had to traverse west through a brushy ravine, beyond which I found a timbered, brush-free slope that led swiftly and without any real difficulty to the Mid Fork Trail. It is probably better to immediately descend from the leftmost of the two cols (see dotted line on map) to get to the timbered slope.
Deep forest on the "trail" leading to the Butte 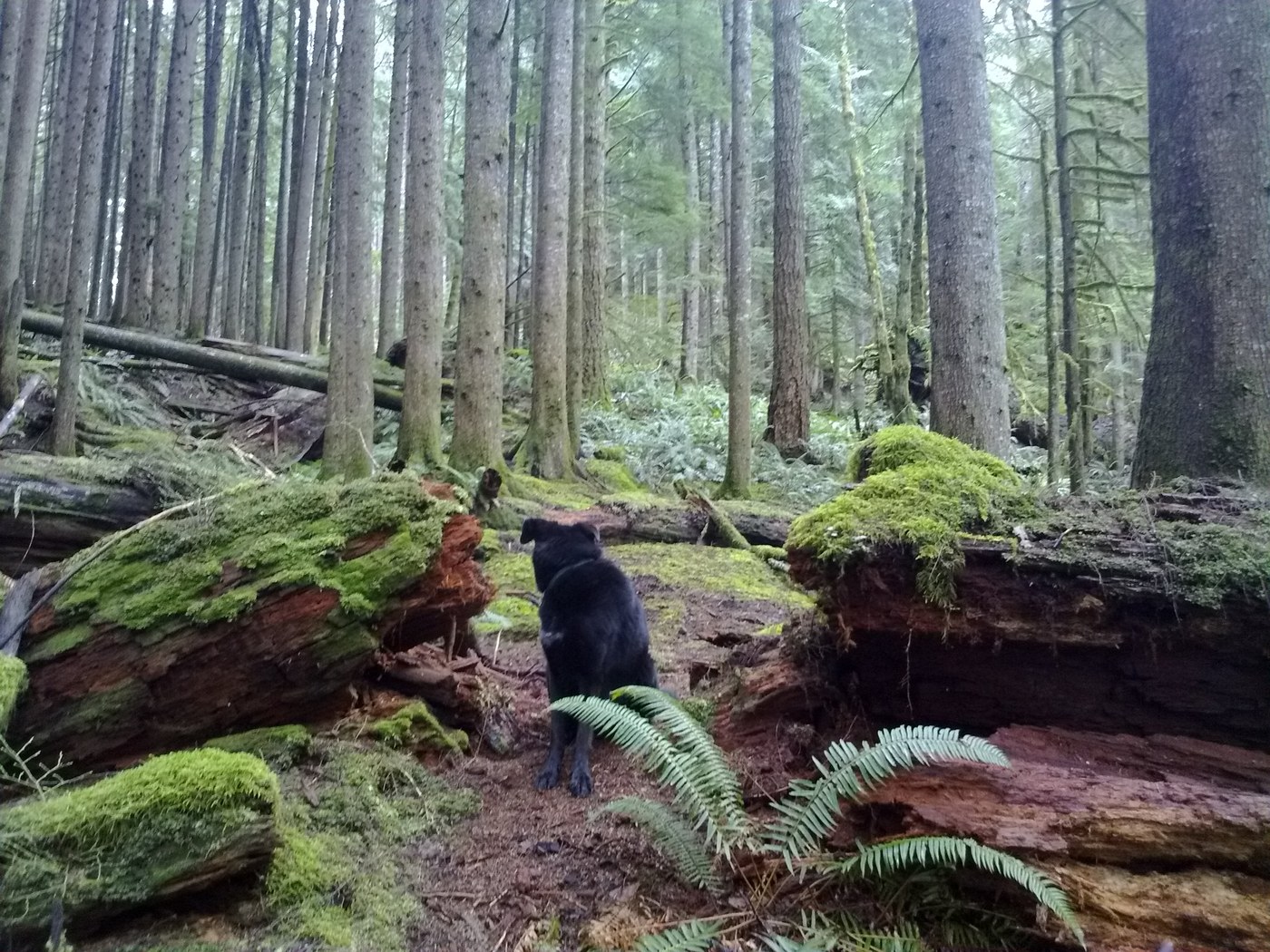 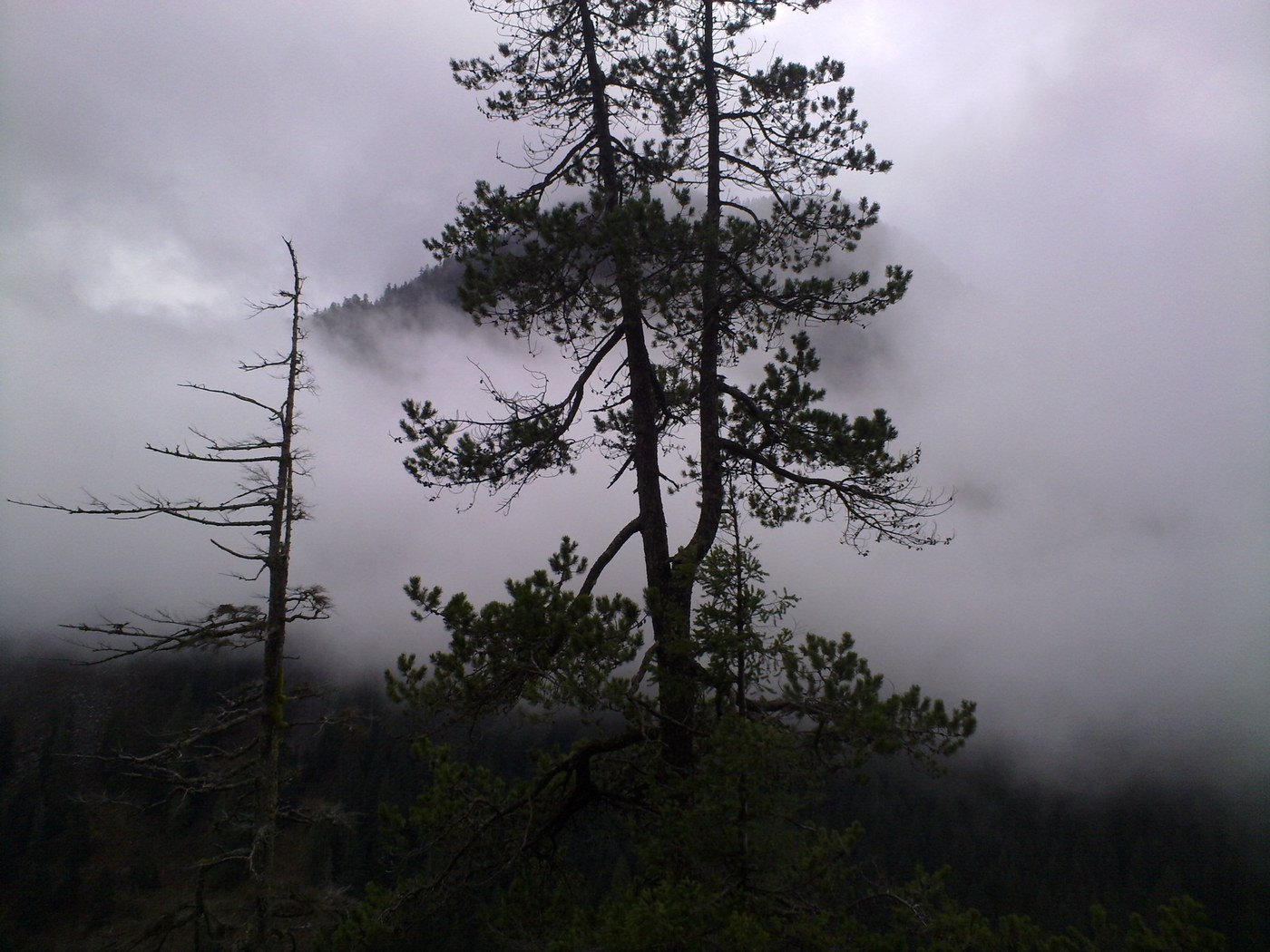