Print
View N from Kendall Katwalk. Chikamin Pk is the skyline shark's tooth. Four Brothers at far right on skyline. The PCT crosses all those snowy slopes beneath them. 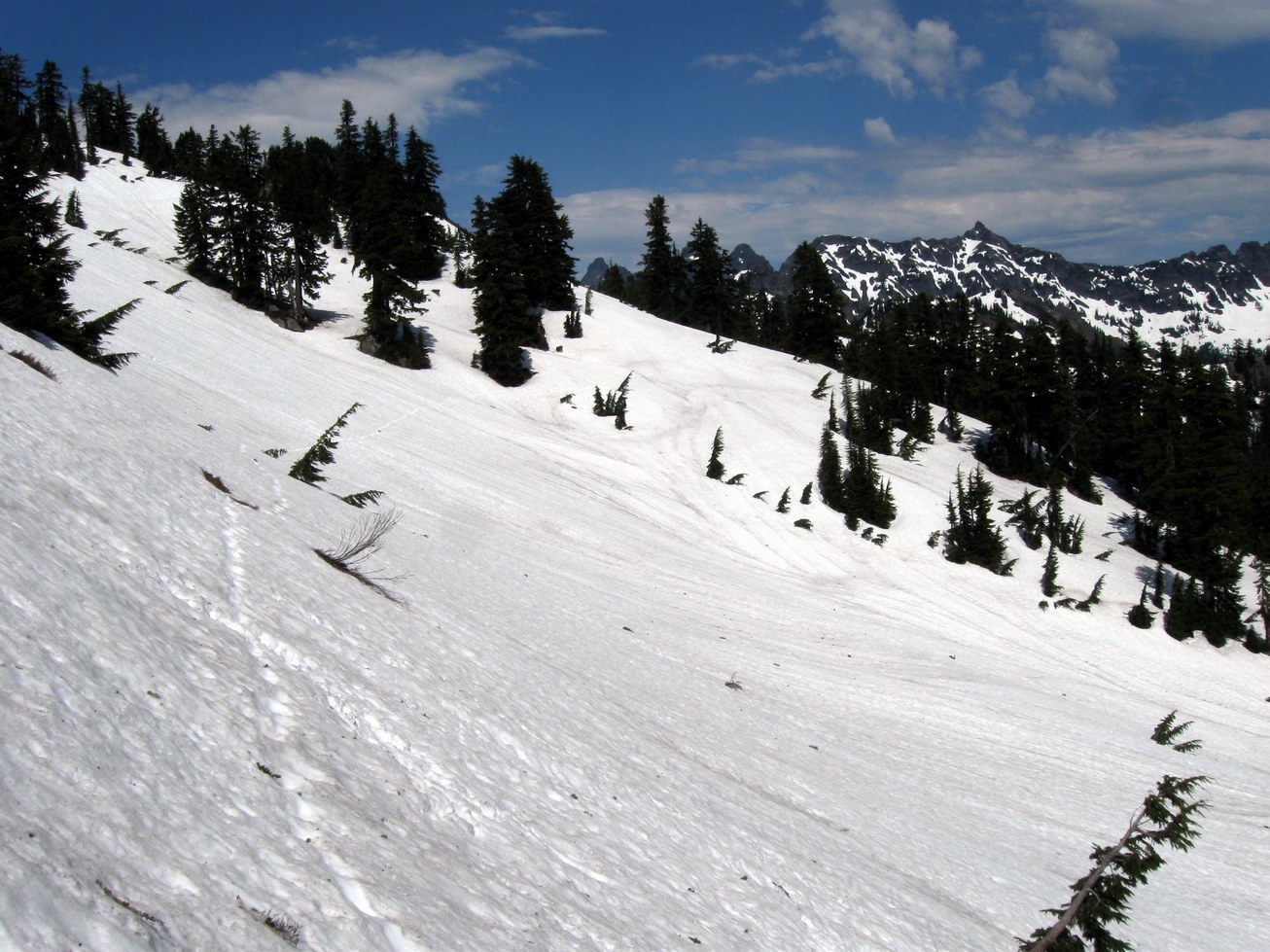 these trails in our Hiking Guide
PCT north of Snoqualmie Pass will be closed for logout 7/25-28/11. This will be a big, complicated job, thanks to the trail crews in advance. Intermittent snow on trail as low as 4400', at the high end of the southbound switchback, melting fast but it does slow progress. Just getting to the Katwalk, there were several places where I was happy to have my ice ax, but several people crossed them with hiking poles, or nothing. Having broken my ankle on steep snow with an ice ax and training, I fear that many people are oblivious to the danger of steep snow. Slip on this stuff, and you get going very fast very quickly. Kendall Katwalk is dry except for one short significant obstacle at the north end (class 2 scrambling move with some exposure). North of the Katwalk, it's continuous but mellow snow travel to Ridge Lake, with perhaps a few places I'd not recommend to those uncomfortable with ice ax travel. NE of Ridge Lake, on the steep slope above Alaska Lake (below Pt. 5928), it's definitely alpine ice-ax terrain with several steep snow chutes. I belayed my sure-footed dog in 5 or 6 places, and threaded the moat in one; this with nearly ideal snow-travel conditions, soft enough to kick good steps. I brought crampons but did not use them; 2" mush-on-crust, no postholing, but I'd advise bringing crampons just in case the snow gets hard in some of those chutes. Travel was much slower than I'd hoped -- my objective was Chikamin Peak, but I didn't even get close -- I settled for a summit bivouac on Alaska Mt. as a consolation prize, ascended the W ridge from the notch. Alaska Mt. summit has a bivvy spot barely big enough for 1 bivvy sack and 1 small dog and a good view. Saw several goats and large bear turds (what were the bears doing so high, in the snow?). Where the PCT heads SSE below Chikamin Peak and Four Brothers, it's mostly under snow still (!). I worry about later-season hikers steeping out onto one of those avy chutes filled with hard late-season snow and learning the hard way, like I did. Alaska and Joe Lakes are about 5% open, melting fast. Ridge and Gravel Lakes are frozen solid. On the return, ascended Pt. 5851 SW of Ridge Lake, an easy scramble from Ridge Lake, and all on snow for us. Recommended; it's 100' higher than Alaska Mtn. If you go to Ridge/Gravel Lakes, it'd be a shame to miss it. North of the Katwalk, there were occasional trickles of water. Note to future readers: the snowpack of 2011 is a bizarre anomaly; my remarks on snow conditions are unlikely to apply to future years. Lucky me, I get to be the last to hike the blowdown before the logout.
View W from Alaska Mt. summit. PCT traverses all across this scene. Kendall Katwalk at far left. Pt. 5851 in center (easy scramble from Ridge Lake, recommended). The rocky crag at right is Pt. 5928 NW of Alaska Lake, showing the steep slopes above Alaska Lake, what I considered the crux; I belayed the dog crossing those steep snow tongues. Snoqualmie Mt. in background.

View NE from Alaska Mt. summit. Joe Lake at lower-right. Huckleberry is the dark horn at left. Chikamin is the broad ridge in center, 2 summits, the SE (highest) summit is the sharktooth. Look close and you can see the PCT crossing beneath them. 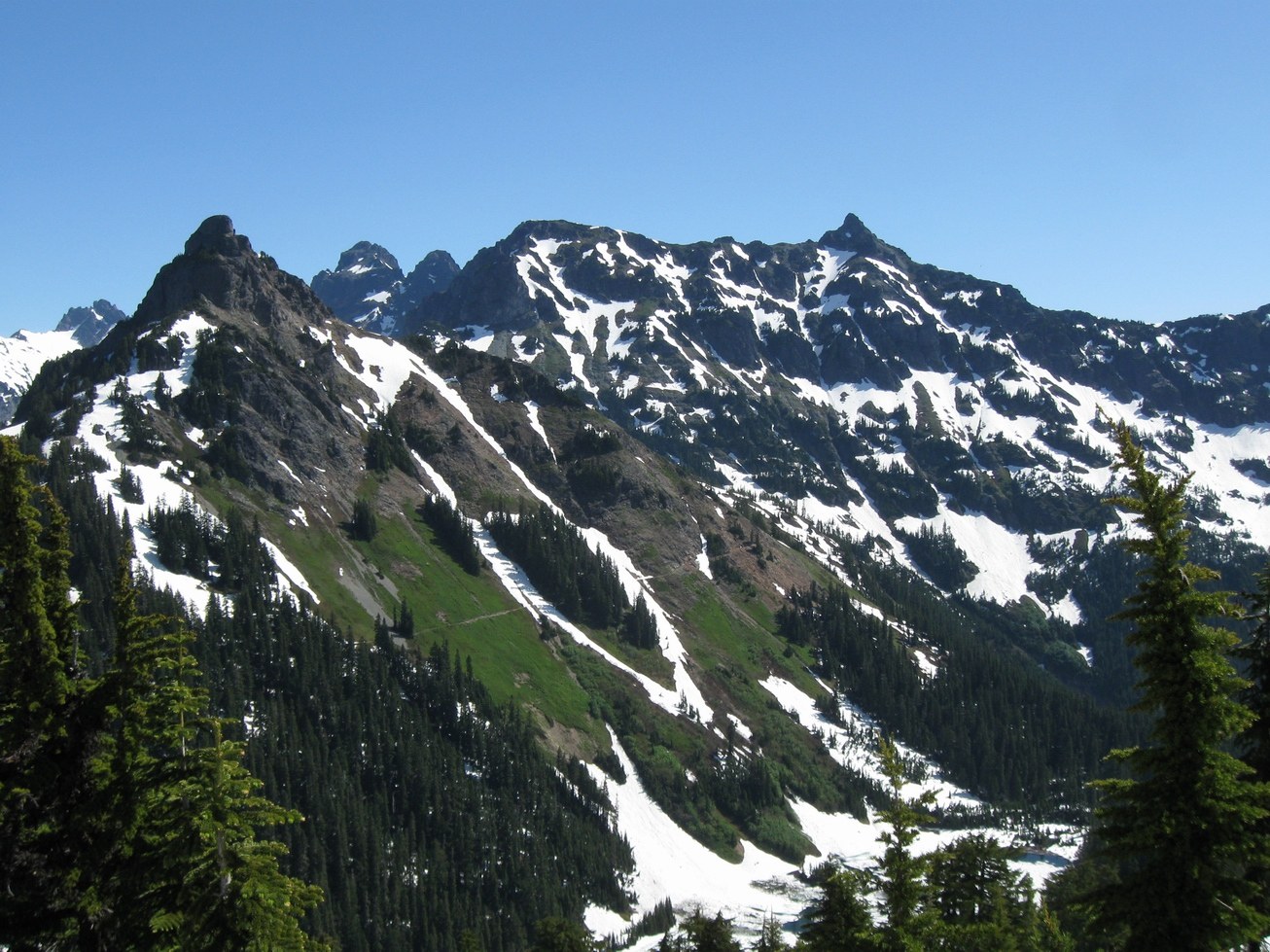 View NE from Pt. 5851 (SW of Ridge Lake, 100' higher than Alaska Mt.). The rocky scarp at left is the steep face of Pt. 5928 NW of Alaska Lake. Four Brothers are the rocky humps at far right. Chikamin is the shark's tooth; the slightly lower NW summit is to its left. The PCT traverses the snowy slopes below these. Alaska Mt is hard to discern; it's the foreground summit in front of the saddle between Chikamin and Four Brothers. The main background peaks (L>R) are Overcoat, Chimney Rock, and Lemah. Thomson is out of the frame at far left. 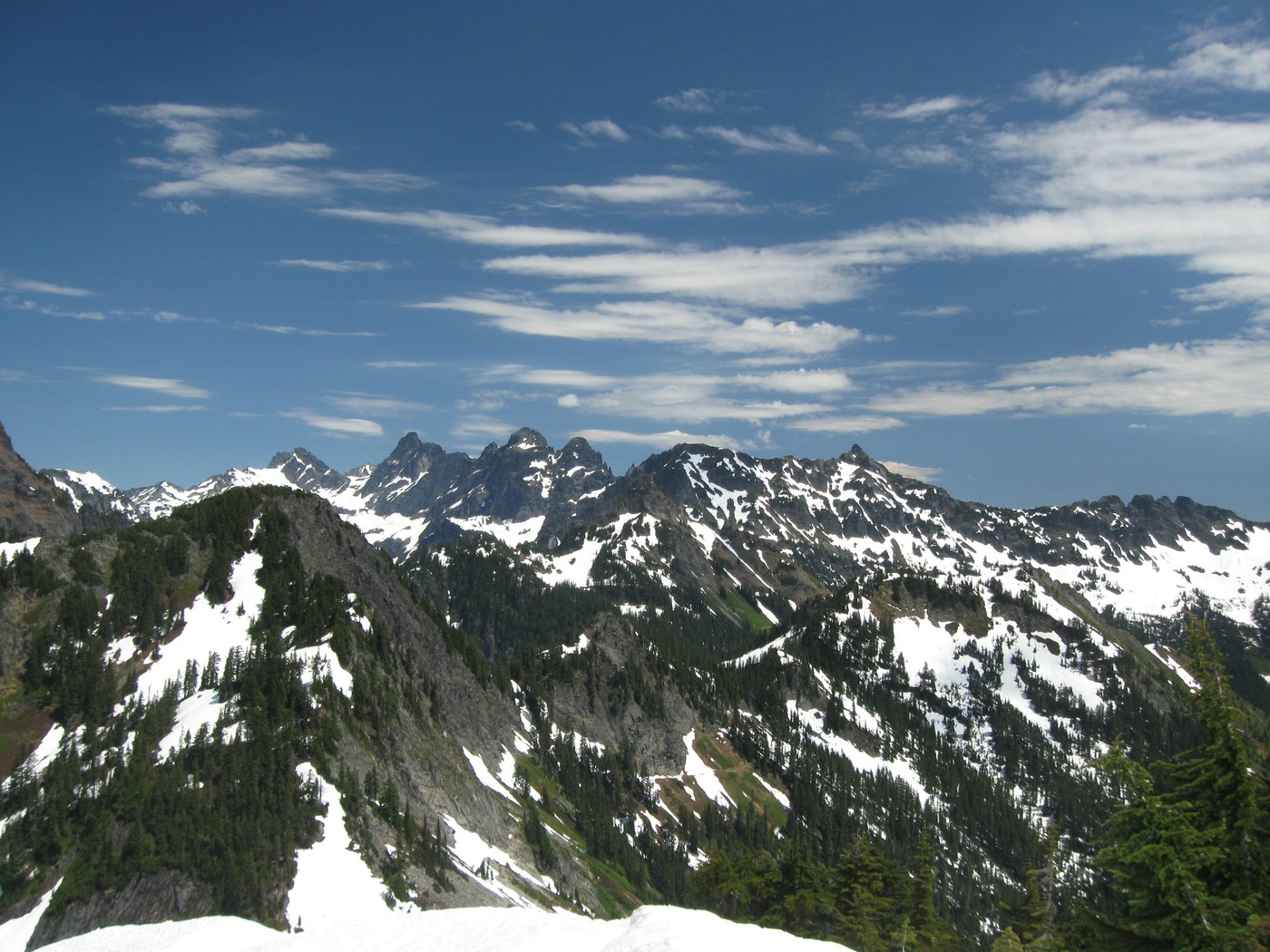