Skip to content
Shriner Peak This would be my first backpack since fracturing my ankle in April. I wanted something with some elevation gain, minimal snow and views. A revisit to Shriner Peak seemed to fit the bill, with snow ... https://www.wta.org/go-hiking/trip-reports/trip_report.2011-07-27.3583985929 https://www.wta.org/site_images/trip-reports/2011/rai.2169.h.rainier-copy.jpg/@@download/image/RAI.2169.H.RAINIER copy.jpg

This would be my first backpack since fracturing my ankle in April. I wanted something with some elevation gain, minimal snow and views. A revisit to Shriner Peak seemed to fit the bill, with snow only on its upper reaches. I was on the hot, dry trail shortly after 2:00. I knew it would be a barn burner, and it didn’t disappoint. At about 3,400’ I was startled by a grouse jumping out of the bushes towards me! It was mean and nasty with long, sharp fangs – and attitude! Ok, the heat might have been messing with me a little… But the hissing and agitation were real! I had never witnessed such a dramatic reaction from a grouse before. At 4,500’, I reached a bluff with the first unobstructed views of Rainier – quite impressive! Beyond here, the trail climbs up into the snow-filled basin where the trail became non-existent under snow. Across the basin, the trail could be picked back up periodically as it climbed to the summit. The area immediately around the lookout is melted out, but most of the campsites are under a very deep snow bank that will not be melting any time soon. The exception is the very last campsite, furthest from the lookout. It is completely melted out and dry. While visiting the lookout after dinner, I looked down to the basin below and saw a surprising sight – a big cat walking across a large patch of snow! About an hour later, an elk followed along the same path, stopped about halfway across the snow patch, and stood like a statue for 3-4 minutes before turning back the way it came. Clearly it sensed something wasn’t right. Shortly after this, the herd of elk began ascending to the summit. Views are excellent from the summit, with Rainier starring you in the face, and the Goat Rocks and Mount Adams further to the south. At 11:00 pm as I lay in my bivy sack, I noticed the first headlamps on Rainier and realized the light was coming from Ingraham Flats. About an hour later they began to move up the mountain, and a second set of lights became visible along the mountain’s northern skyline. I was seeing climbers on two separate climbing routes – the DC and the Emmons! Morning came very early, and sunrise was as promised. It was good to be in the mountains again. 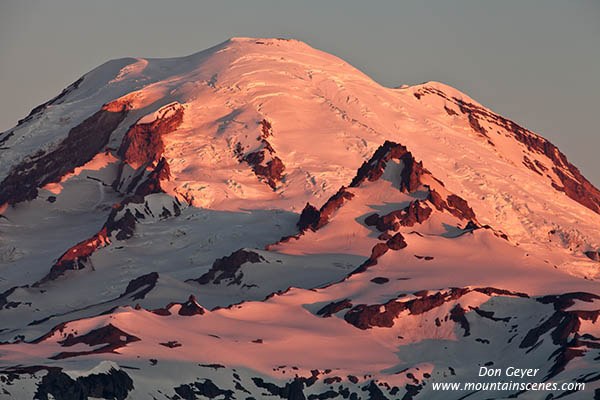 Great report -- love your photography. Ever been to Shriner Lake -- and if so, any info you would share on how to get there?