Summit view S. I was standing on a rather wicked cornice, not a smart place to be. From the E, this cornice sometimes looks really ugly.

Granite Mt --> West Granite Mt --> Olallie Lake loop Avalanche danger was considerable this weekend. Saturday was the 2nd day of the first spell of solid hot weather, the snowpack was not really consolidated yet, and NWAC had a special bulletin out Friday that caused me to change plans. I did see some recent slides. http://www.nwac.us/ Might be worse tomorrow (Mon 5/14/12). Upon my return, I encountered 3 people, perhaps new to the area, who had summited and presumably descended late in the afternoon heat, apparently oblivious to this situation at this notorious avalanche site. It's always a good idea to check http://www.nwac.us/, even this late in the season. I did use snowshoes after 3 PM (largely for the dog's convenience, not entirely necessary). A long ice ax would've been much better than the silly hiking pole. Note: this trip did NOT actually include Trail #1016; it is a variant that joins that WINTER route. 1016 as shown on the map is NOT a route you want to take in spring, as it crosses the notorious avalanche chute and dangerous slopes on the south side. The winter route on 1016 (I believe) follows the trail up to about 3600, then leaves the trail heading NW to gain the safe SW ridge. I wonder about that section between the trail and the ridge. The way I do this trip is: Pass the Tr #1016 junction and continue about 1/4 mi. to almost 2800' to the major N-S ravine (if you encounter switchbacks, you've gone too far). There are actually two closely-spaced parallel streams here, the first is smaller; cross this and then leave the trail right before it crosses the 2nd, main stream, about 2800'. Ascend forest on the E bank of the main stream, heading North to about 3600', where you start angling NE. The brush is thin, at least when there's this much snow. About 3900, you reach a basin at about treeline. From here, go straight NE up the SW ridge of Granite. There are actually two roughly parallel SW ridges several hundred meters apart; you can take either. The easterly one is the bare rocky ridge you see from I-90, and if you head for it, you'll join the standard winter route almost immediately; you'll have to cross below an open slope to get there, but you got a very early start, so you'll be ascending this early in the morning when it's still frozen, right? In hot weather like this weekend, I'd say the main avvy danger is during the descent, if you loiter on the summit until that SW slope starts to bake. I had decided that the safest descent would be on the westernmost of these two parallel ridges (not the rocky one that you see from I-90). This would avoid crossing from the eastern to the western ridge below the open slope above. But I have never actually done that descent route. I foolishly got a late start and didn't reach the summit until 12:20, but it was still frozen on that SW ridge. I had the summit to myself -- I guess the NWAC bulletin had made a lot of people avoid this popular place -- and lounged until 2:30, not a good idea in this kind of weather. The SW slopes were getting wet and loaded, several inches of heavy wet snow sliding easily on the crust underneath. But I didn't descend the SW ridge at all. I descended the NW ridge to West Granite, threading between cornices on the NE and avvy slopes on the SW (photo). Ascending the SE ridge of West Granite is mostly in trees. On snowshoes by then. Descending the NW ridge of West Granite was much the same as the NW ridge of Granite: cornices on the right, avvy slopes on the left. It eventually curves towards the west, and gets steeper. I'd taken a hiking pole instead of my 80cm ice ax, and that was really stupid. It would have been easy to start a slide at the top of the steep S slope; several inches of heavy mush on a smooth crust. I was hanging onto trees. From the col N of Olallie Lake, you head S to pick up Tr #1007 on its east side, which is still in heavy snow. The first tracks I picked up were not at all obvious. Picking up the trail might be tricky if you don't know the area. I think the snow ended about 3200'. My point is: this was a fairly casual trip with avalanche and cornice danger nearby during the warm afternoon descent. You could get into trouble here. About this time last year, I started and briefly rode a small slide here on the S side at about 4000' in similar warm afternoon conditions. Beckey mentions the avalanche hazard in this S chute. Don't forget the famous guy who got buried in a slide here a couple years back and called for his own rescue on a cell phone (not making this up). Did I mention http://www.nwac.us/?
summit view N -- Kaleetan & Chair

NW ridge of Granite from West Granite. Avoid the cornices on left (NE) and avvy slopes on right (SW). Note the lookout, and collapsing cornices. 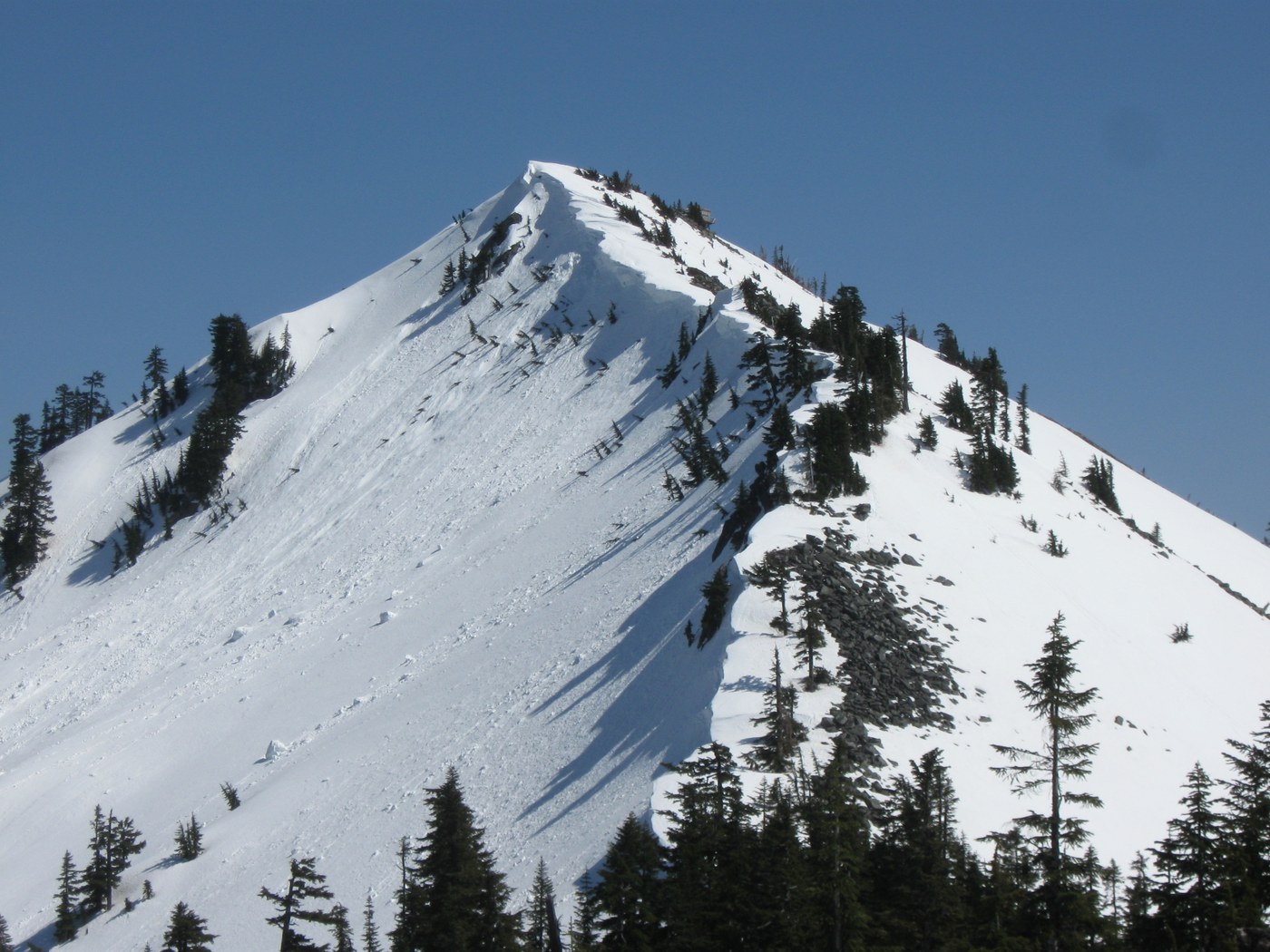 NW ridge of West Granite from the knob NE of Olallie Lake. Again: cornices on the N, and the avvy slope on the S seemed more dangerous than the one on Granite. 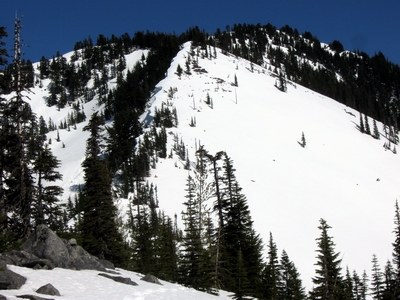