Skip to content
North Fork Entiat River, Pyramid Mountain, Pyramid Creek Solitude, solitude, and more solitude. Not to mention flowers, jagged peaks, and wild mushrooms. Need I say more? I got the idea for this trail loop from "Backpack Washington" by, Douglas Lorain. My ... https://www.wta.org/go-hiking/trip-reports/trip_report.2012-08-22.3841569709 https://www.wta.org/logo.png

Print
Saka, Pinnacle, and Emerald from L to R taken form the summit of Cardinal. 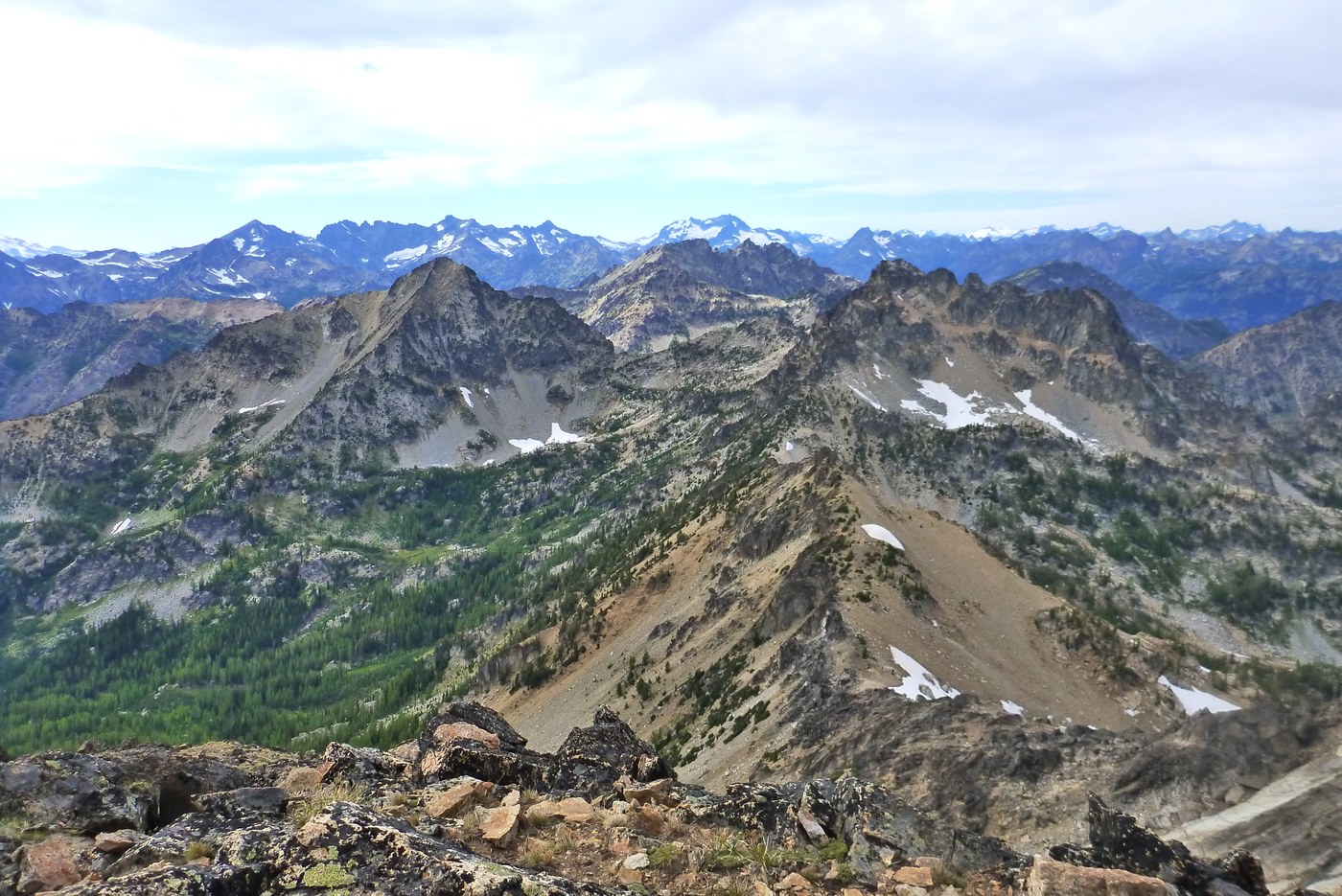 these trails in our Hiking Guide
Solitude, solitude, and more solitude. Not to mention flowers, jagged peaks, and wild mushrooms. Need I say more? I got the idea for this trail loop from "Backpack Washington" by, Douglas Lorain. My peak bagging information was largely filled in by the "Cascade Alpine Guide", Fred Beckey and "Summit Routes" by,Stephenson and Bongiovanni. I wanted peaks to bag and my partner wanted lakes, meadows, and beauty. Nobody was disappointed. Our first day was a long steady hike up a dry trail through classic east side ponderosa forests. The trail can be steep at times and pretty chewed up by our equestrian friends. Not to fear though there are more than enough switchbacks to ease the difficulties. The non-stop creeks, meadows, and vistas make it very worthwhile. Our 4 day trip averaged ~10 miles per day. Our first two nights used the same camp site in a basin below Cardinal Peak (8590'). My second day was spent scrambling three of Washington's highest 100 peaks, the aforementioned Cardinal, Saska (8409'), and Emerald (8422'). The difficulties were not great but loose rock was the order of the day (so be careful if you go). My summits were blessed with an American Kestrel, and two Mountain Blue Birds. My partner chose a no-less-elevation-gaining-day starting by accompanying me to Saska Pass to begin my scrambling. She then headed back through camp and on to Fern Lake. This was reported to be a "top ten" alpine lake with fantastic campsites, alpine granite all around, and a stout hike up to it. Our third day headed eastward towards Pyramid peak. The map showed way too much trail for us so off we went as the crow flies. Once crossing Grouse Pass from the west the trail drops steeply into the South Fork of Pyramid Creek. We veered off towards the east over and through two high valleys. Infrequently tracked but not impossible. Upon crossing into the second valley we picked up a faint cairned trail just below the talus and cliff bands, right where you'd expect it. Blue Grouse were frequently rousted while passing through the tamaracks here. The summit of Pyramid once had a fire lookout. It now has expansive views and quite a bit of wind. The north side drops an astounding 7125' to lake Chelan below. Be sure to look for the old outhouse which is 100' below the summit on the NE corner. The view and exposure are hard to beat. Our hike out was full of flowers and Smith boletes. Our packs nearly bursting with the latter. Camp sites along the Pyramid Creek trail were frequent and roomy. One, Three Tree Camp, even had a bear box for your food. After passing it we noticed dozens of trees which had been clawed by bears, some at quite dramatic heights. I would do this hike again in the fall to see the golden larches although there are sure to be many hunters. There were bugs but they were not bad. Valley temperatures were ~45 at night, our camp at ~7500' had frost the last morning. Total hiking distance excluding peak bagging and Fern lake but including a trip to Saska Pass was ~26 miles. Fern lake was a 3 mile diversion. The peak trilogy was about 6000' of gain mostly from the valley bottom. The ridge was so tortuous I wouldn't recommend it to anyone. From camp in the meadow it took me 8 hours for all three.
Flowers are peaking now! Mountain meadows virtually untrodden once you get away from the trail. 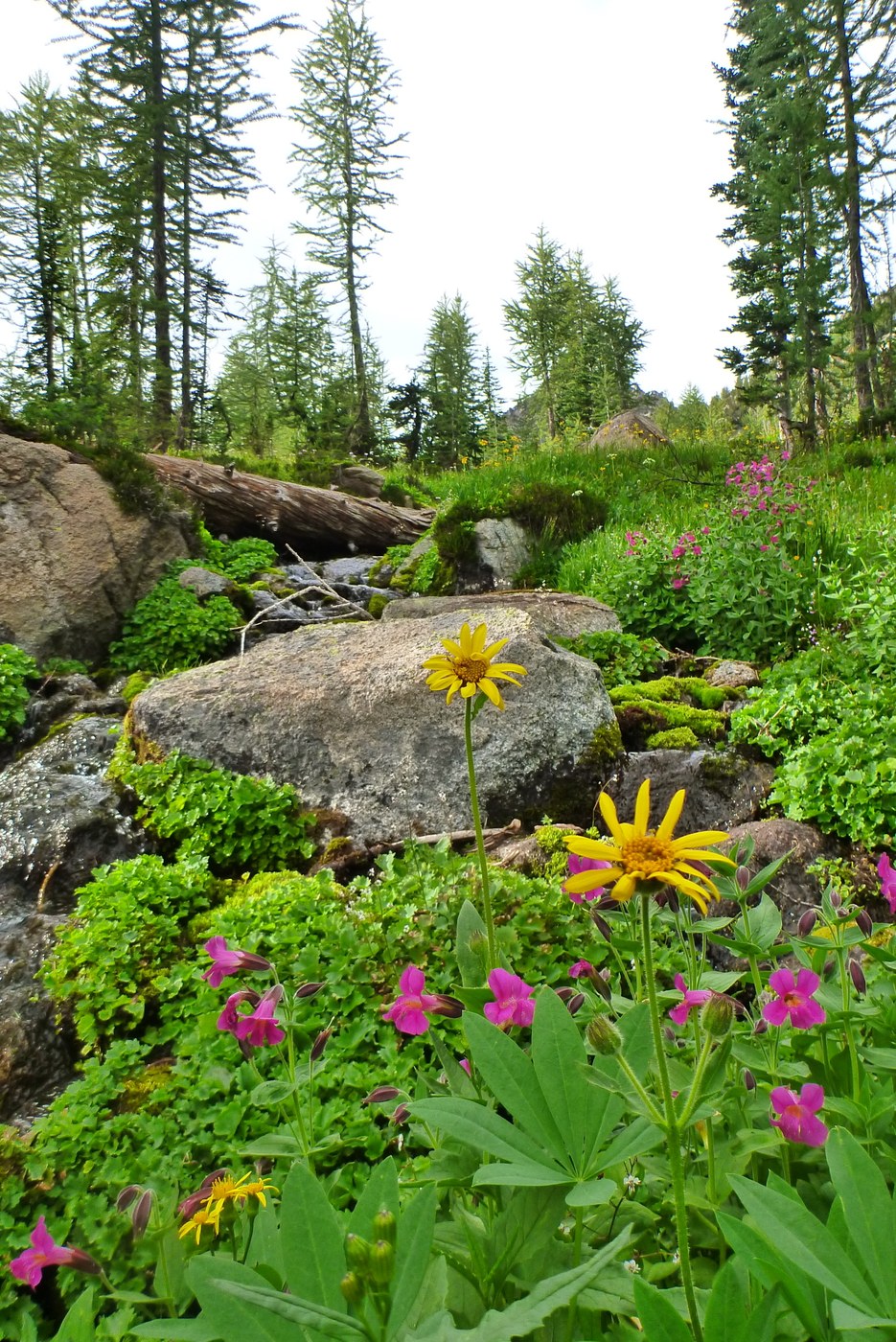 Smith Boletes to your heart (and stomach's) delight! We ate 'em every day. 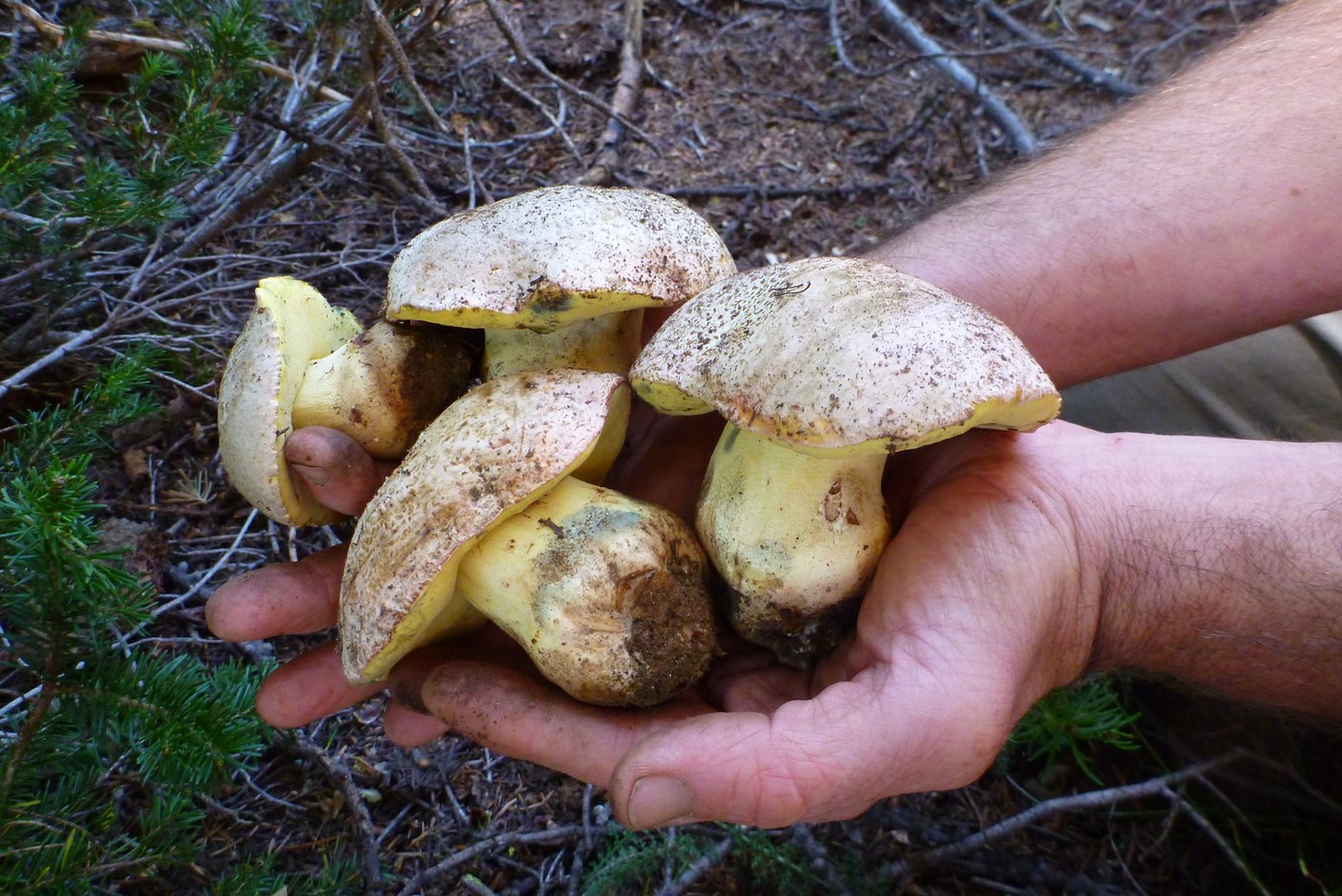 These bear marks were 7' off the ground. A one mile stretch near Three Tree camp had ~20 or more of these. 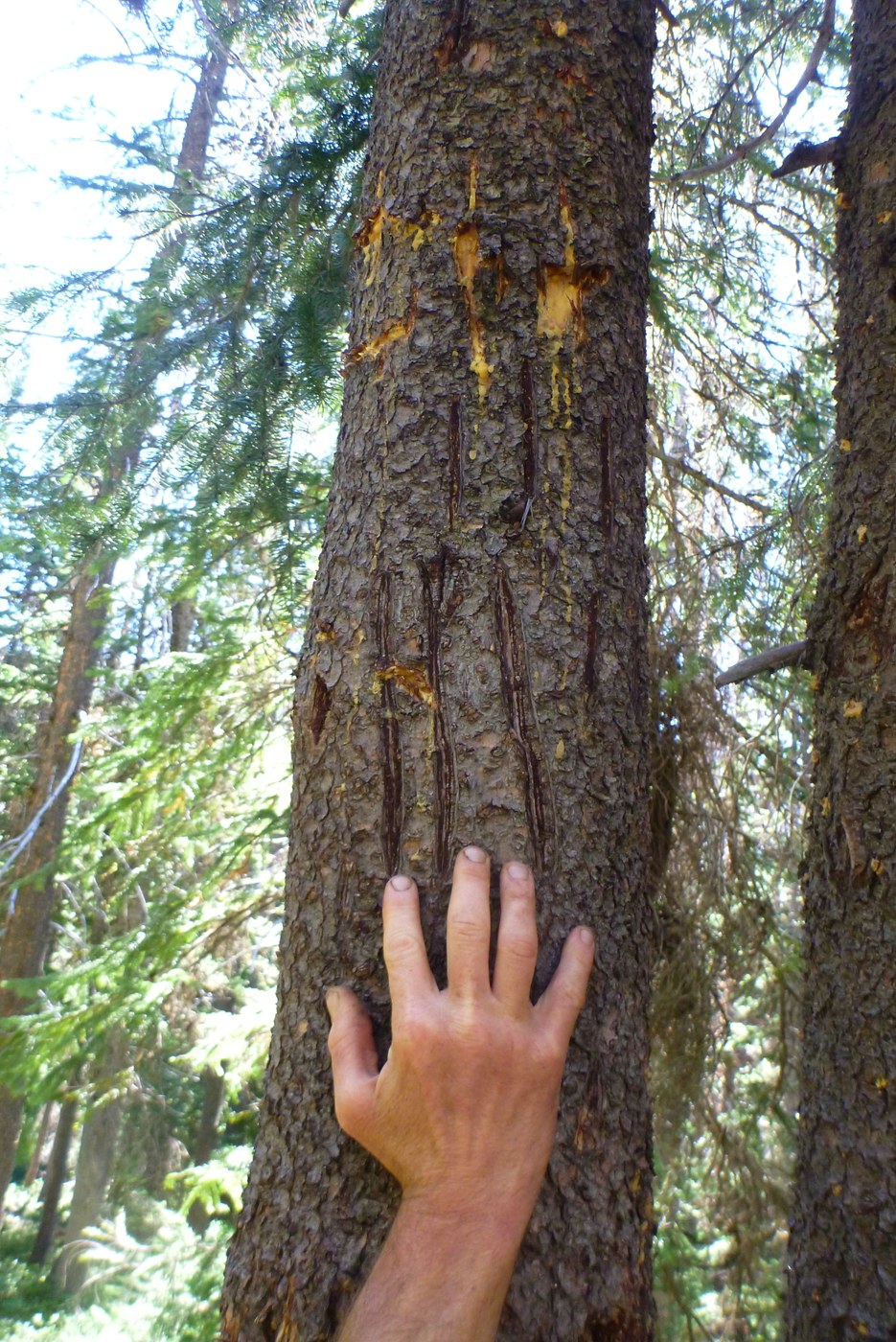 The mushrooms appear to be Smith's Boletes, not King Boletes (note the slight blue bruising). But as you've just proven, they're edible, too :-)

Thanks for the correction. I didn't have guide material with me and was fooled apparently by the bulbous stipe. I was surprised by the mild bluish tinge but felt confident since the staining was very slow to come about. Thanks again.