Skip to content
link
Liberty Cap, Buck Creek Pass, Flower Dome, Image Lake via Miners Ridge, Backpacker Camp, Suiattle Pass, Upper Lyman Lake, Spider Gap, Spider Meadow and Phelps Basin We started our loop hike at Trinity TH on a beautiful sunny day. Little did we know what the weather had in store for us! Day one was mostly perfect: the thunder we heard in the early evening ... https://www.wta.org/go-hiking/trip-reports/trip_report.2013-08-13.2260548157 https://www.wta.org/site_images/trip-reports/2013/img_4833.jpg/@@download/image/IMG_4833.JPG

It's good luck if you sponsor me for Hike-a-Thon! 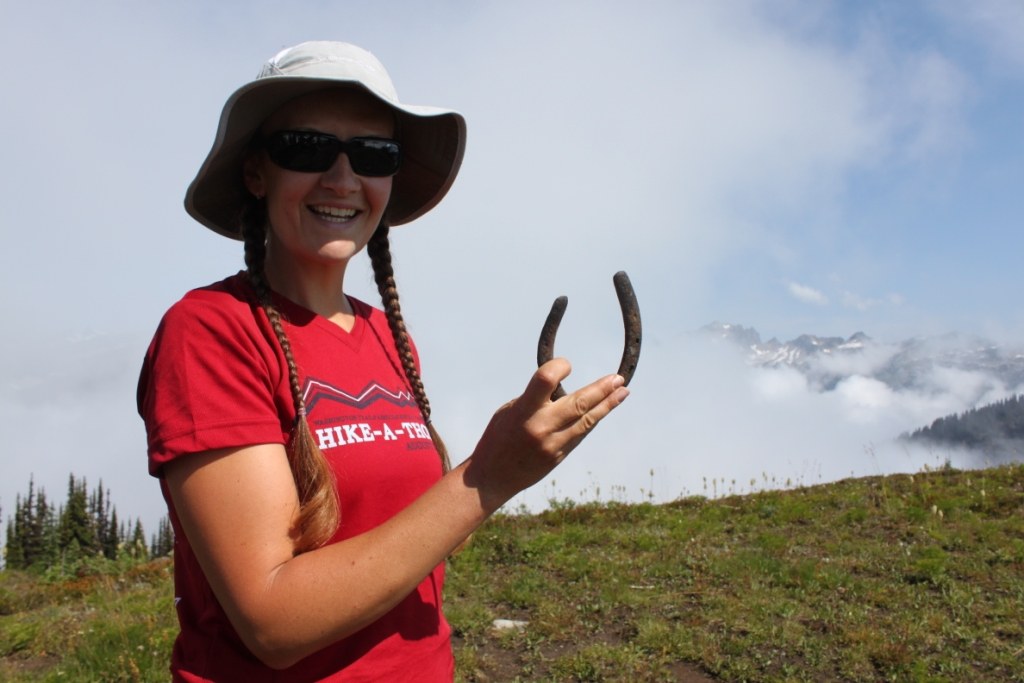 We started our loop hike at Trinity TH on a beautiful sunny day. Little did we know what the weather had in store for us! Day one was mostly perfect: the thunder we heard in the early evening dissipated and allowed us to do the side trips to both Flower Dome (nice) and Liberty Cap (amazing!), plus cook dinner before the real storms started. We were even able to glimpse the stars and see a spectacular meteor before the clouds rolled in. We were awakened several times that night by the storm, but the clouds burned off quickly on Saturday. We witnessed a mass exodus of backpackers out of Image Lake, our intended destination. It seems the Friday night storm was worse there, and people were wet and perhaps a little miserable. We were undaunted. Our reward was having Image Lake all to ourselves! We could hardly believe our luck--Saturday night, and not a soul around. We had just enough time for a quick swim before the next storm arrived. I didn't even have time to cook a dinner due to the storm! I ate my extra snacks and dove into the tent, but not before the hail storm hit. It was interesting to cower under some trees and watch the rain turn to hail, and then to watch little rivers of run-off form and come down the hill. The ground was white with the hail, and we found piles of it left over on Sunday morning. Sunday was clear but missing the alpenglow we were hoping for. Then the sun came up, the air warmed, and we were off- and on- in the clouds for most of the morning. We did the side hike out to the lookout, but by the time we hiked out the mountain was completely shrouded in fog. By the time we reached Cloudy Pass, the thunder was back. We were afraid we were in for more of what we experienced the night before, but fortunately this time the rain was short-lived. We were able to eat our dinner in only a little rain, and were rewarded by a sunset rainbow as we did the sidehike out to Lyman Falls. On Monday we went up and over the Gap, and were able to play in the snow on the way down (still plenty of snow for playing in, and good travel conditions). The only downside is that we weren't able to find anyone willing to give us a ride back to Trinity, so we had to finish with a little road walking (with sore knees from all the downhill at the end). Do this backpack, and then sponsor me for Hike-a-Thon--please!http://www.gifttool.com/athon/MyFundraisingPage?ID=1468&AID=2449&PID=368763
Samantha on the Liberty Cap trail. 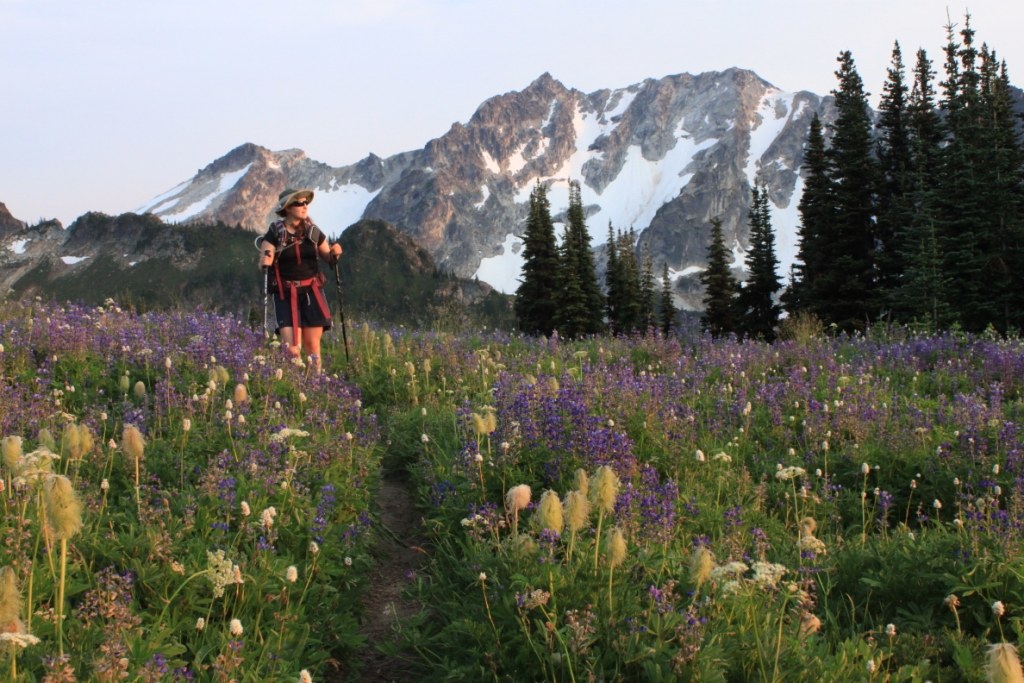 Ah, Image Lake. All. To. Ourselves. 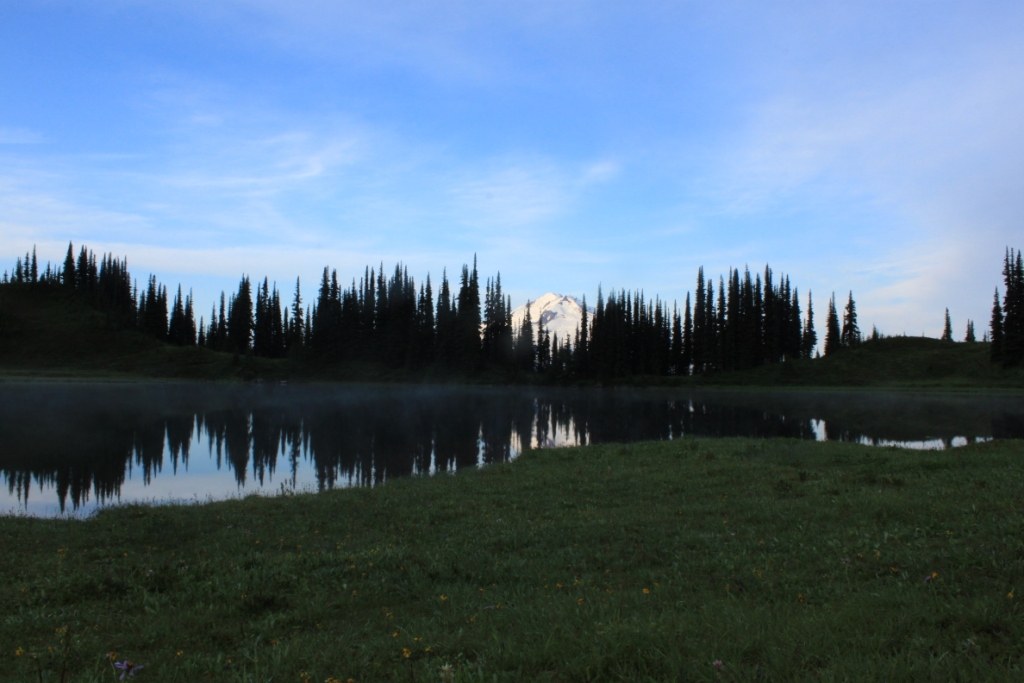 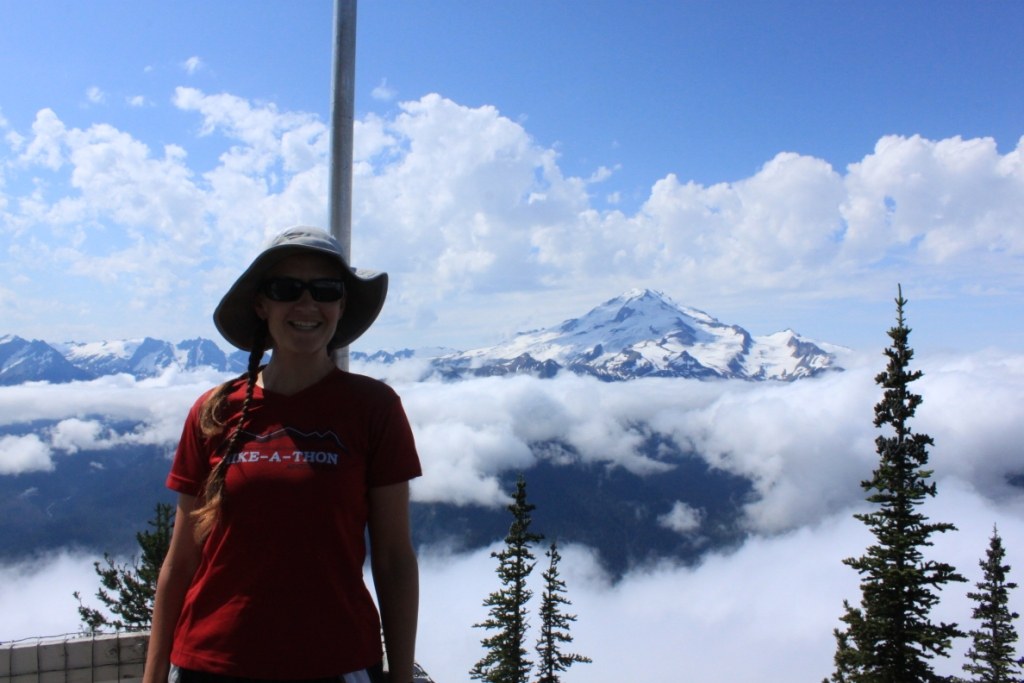