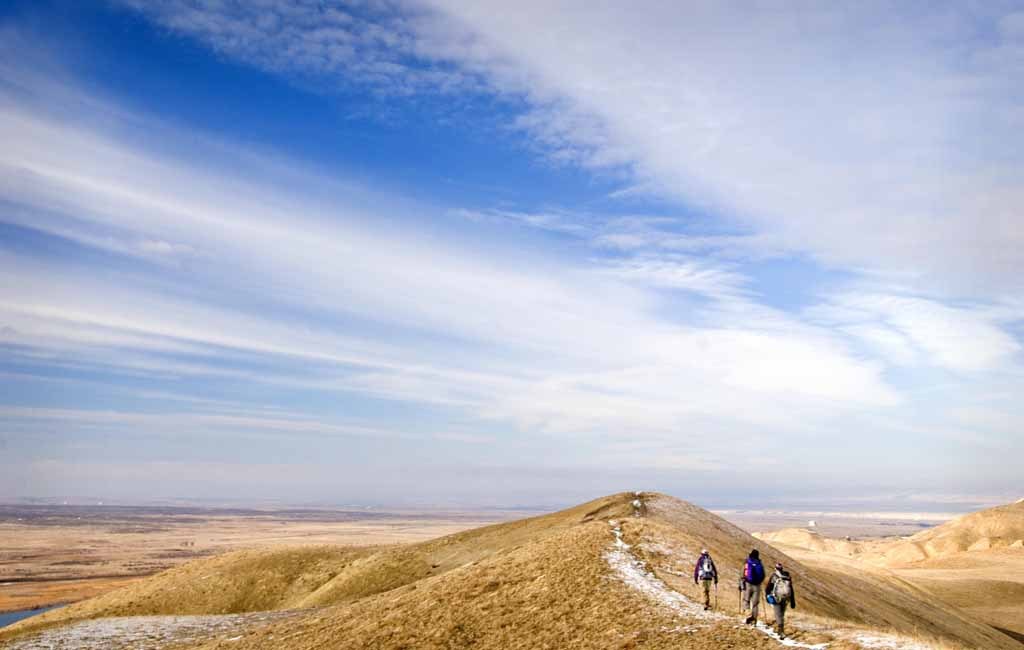 I led my second Winter Walk of the season for the Cascadian to the White Bluffs - South today. I was hoping for nice late afternoon light like we had last Sunday at the north bluffs, but was largely disappointed. We hiked my usual route: down the old highway to the gate, up to the ridgetop between the Columbia River and the Great Valley, along the ridgetop to the highpoint for lunch, northwest along the ridge back to the road and out to the sandstone pillar, then back to the road and up to the cars. We hadn't walked 100 yds when we were confronted by a 7 foot wall of tumbleweed across the entire roadway, but we managed to find a way through. We had about a 50 - 50 mix of sun and clouds: whenever it looked like it was going to be clear for a while it would cloud up, & whenever it looked like we had lost the sun for good, it would clear up some. We did have mostly sun at lunchtime. We saw lots of water fowl on the river & 2 deer, and as we were walking back to the road from the pillar, squadron after squadron of geese flew overhead, some squadrons with probably 100 geese or more. It was quite a sight (& sound)! The only other people we saw were two hikers just as we were arriving back at the trailhead. I stayed at the trailhead after the others left for Yakima hoping for nice evening light, but there were too many clouds in the west & there were only a couple of brief periods when the light was strong. But nonetheless, this was a nice hike in a great location.
Lunch abv the Columbia River and the Great Valley Photo (c) David Hagen 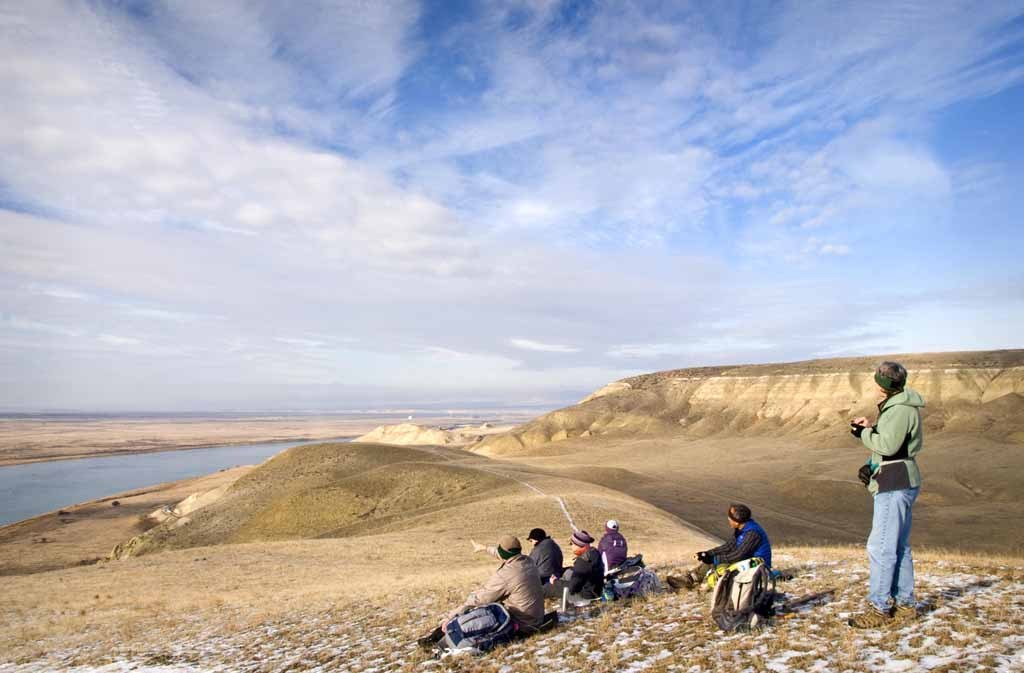 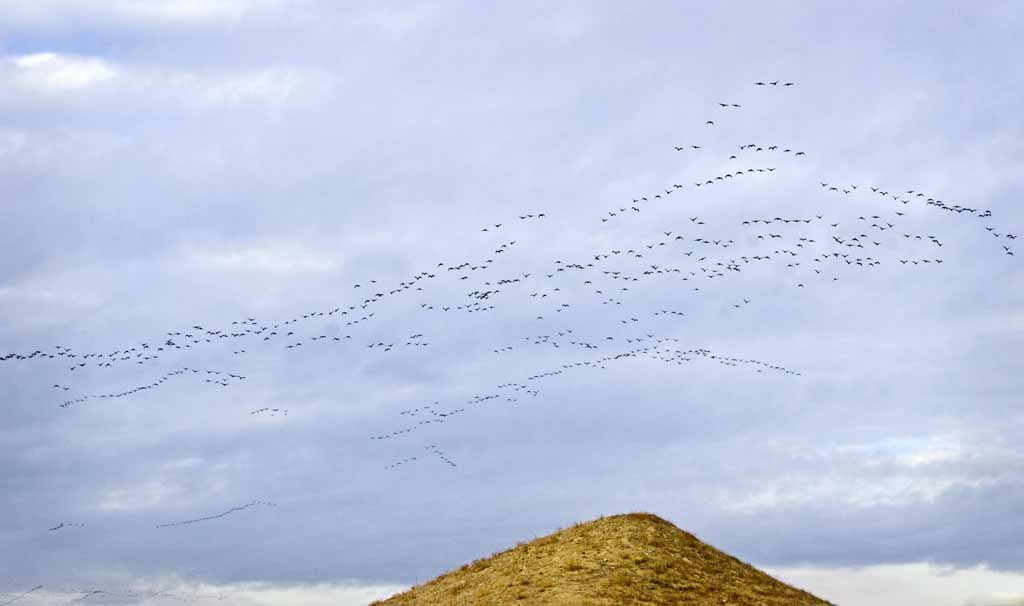 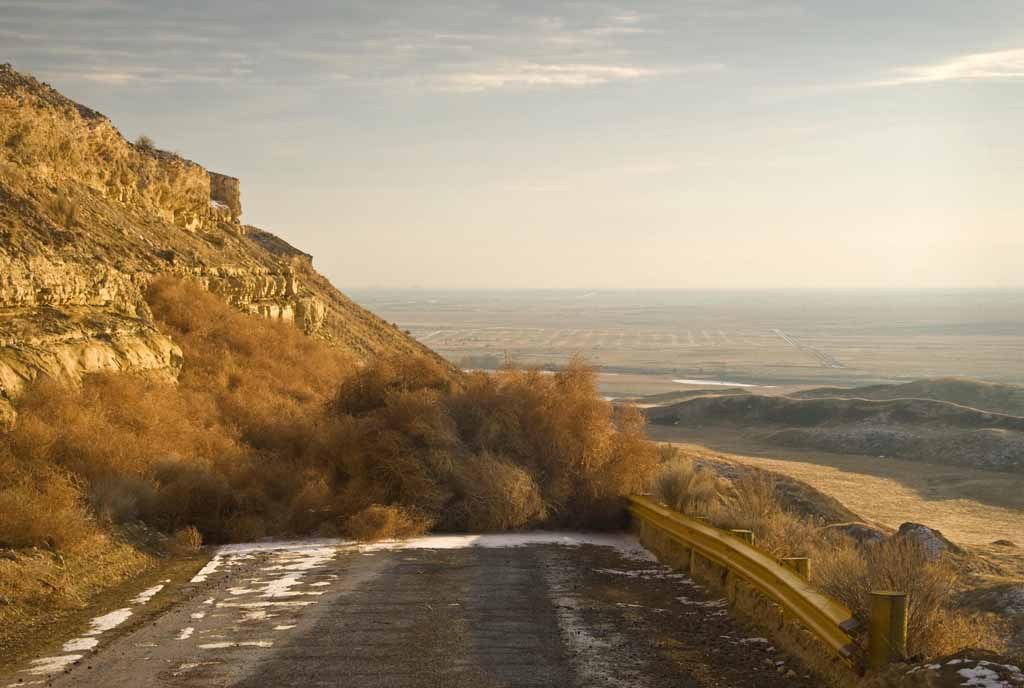 David - though it's still a bit difficult to think of the barren landscape now, whereas before the 2007 fires, it was full of lush sagebrush, White Bluffs is still an amazingly beautiful place, and I appreciate the photos you send (and I hope Cascadian Kim gets her camera fixed or replaced!). I wouldn't mind lending a hand in a restoration work party there. They're held during the week, though. Perhaps this spring I'll take a day off. If you and your friends are interested in joining me, that'd be a fun day, and we can stay afterwards and wander the dunes (which I have never done, though I've been to White Bluffs many times over the years). I'll contact you through the Conservancy this spring! If you're not up for a work party (I know you already do tons of volunteer work), I'd love to hike with you guys anyway!