Lake Valhalla from the main beach 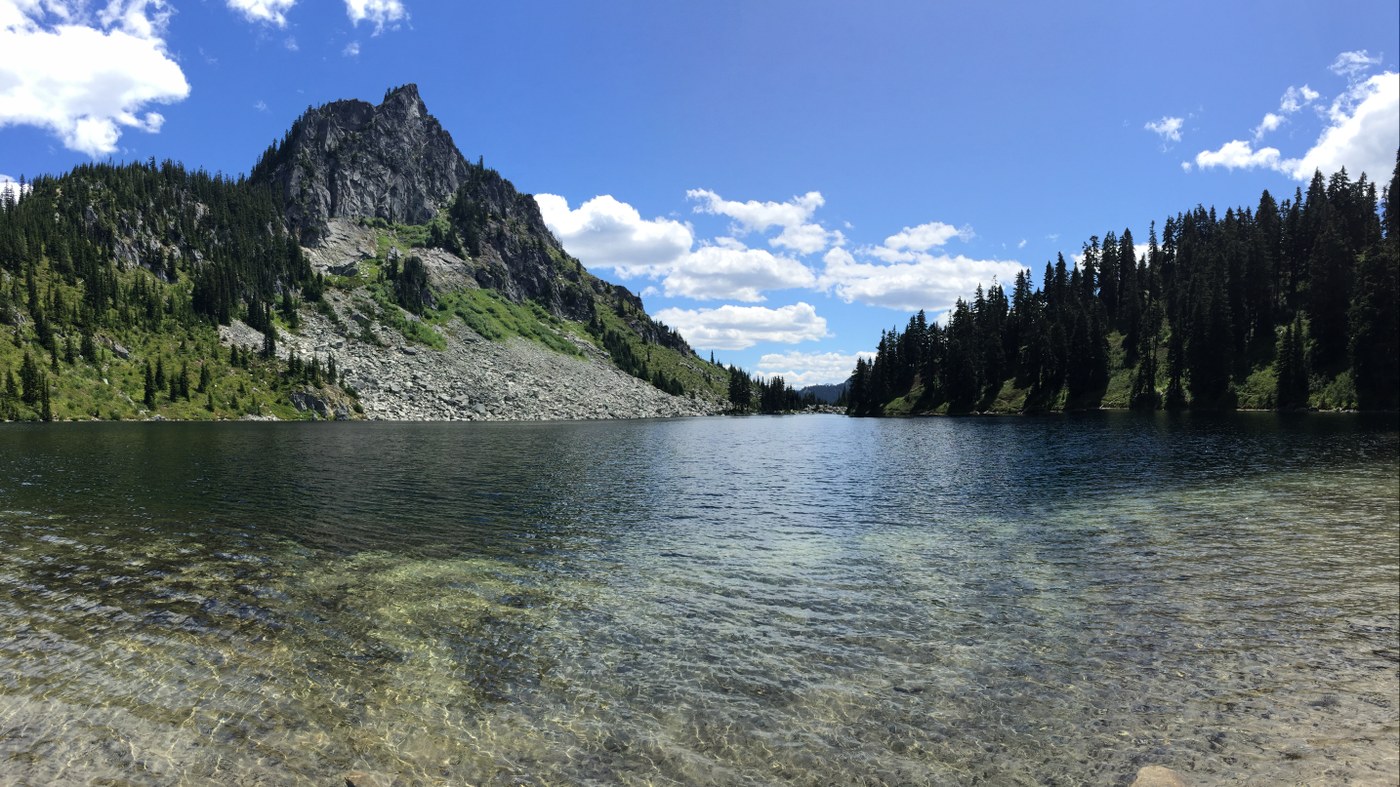 Lake Valhalla is a beauty! My friend Lori and I hiked in and spent one lovely night swinging in our hammocks with the Valkyries. After reading reports of how awful the Smithbrook road is, we opted to park at Stevens Pass and hike in the longer route via the PCT, and we didn't regret it. We ended up hiking out via the Smithbrook backdoor and hitching back to Stevens Pass, so we got to see both parts of the trail. We enjoyed the PCT portion much more than the Smithbrook portion. The PCT hike is just prettier all the way around. There are sweet meadows along the way, and a few views as you go. The trail is in much better condition, and the ascent is gradual. The Smithbrook portion really is just a back door. It's rugged, stump-blasted, and a steeper route up the back side. There are a few obstacles in the trail but easy to navigate. You do get a great view of Lake Valhalla from the ridge, though, that you don't get when you come in via the PCT. If you want scenery, and an easier but longer walk, start at Stevens Pass. If you you're all about the destination over the journey, the Smithbrook is fine. The Smithbrook road wasn't nearly as bad as we were lead to believe. I wouldn't want to be in a super low-clearance car, but most cars should be able to make it if they drive reasonably. It would have been no problem in my VW bus. It was a gorgeous weekend. Sunny, mostly clear, but a bit chilly (60's in the day and down to 39 at night.) It was surprisingly cold given that it was a hot weekend back in Seattle. It was fairly windy, too. No rain, though. There may have only been one other group camped up there, which we were surprised by on a nice saturday. There were plenty of day hikers all day on sunday, though. Good luck trying to find a spot to skinny dip; be prepared to hike a ways around the lake. The main beach was crowded. It was worth it to find a private-ish spot for a quick dip, though (brrrrr!) The mosquitoes scoffed at my mere 30% DEET. They were incessant. I got bit a lot, and I'm one who rarely gets harassed by mosquitoes. Bring the hard-core bug juice or be prepared to be a bug banquet. Aside from the bugs, we didn't see a lot of wildlife. Pica, chipmunks, and trout were about it. Did see what appeared to be coyote scat on the trail though. The trees were plenty big enough to support a hammock, but finding a spot with appropriate trees for two hammocks was a bit of a challenge. In the end we found a nice private spot with a great lake view, though. Nothing beats hanging around in a hammock at a beautiful alpine lake. :-)
Valhalla from the scramble trail around the right side of the lake

From the far side of the lake 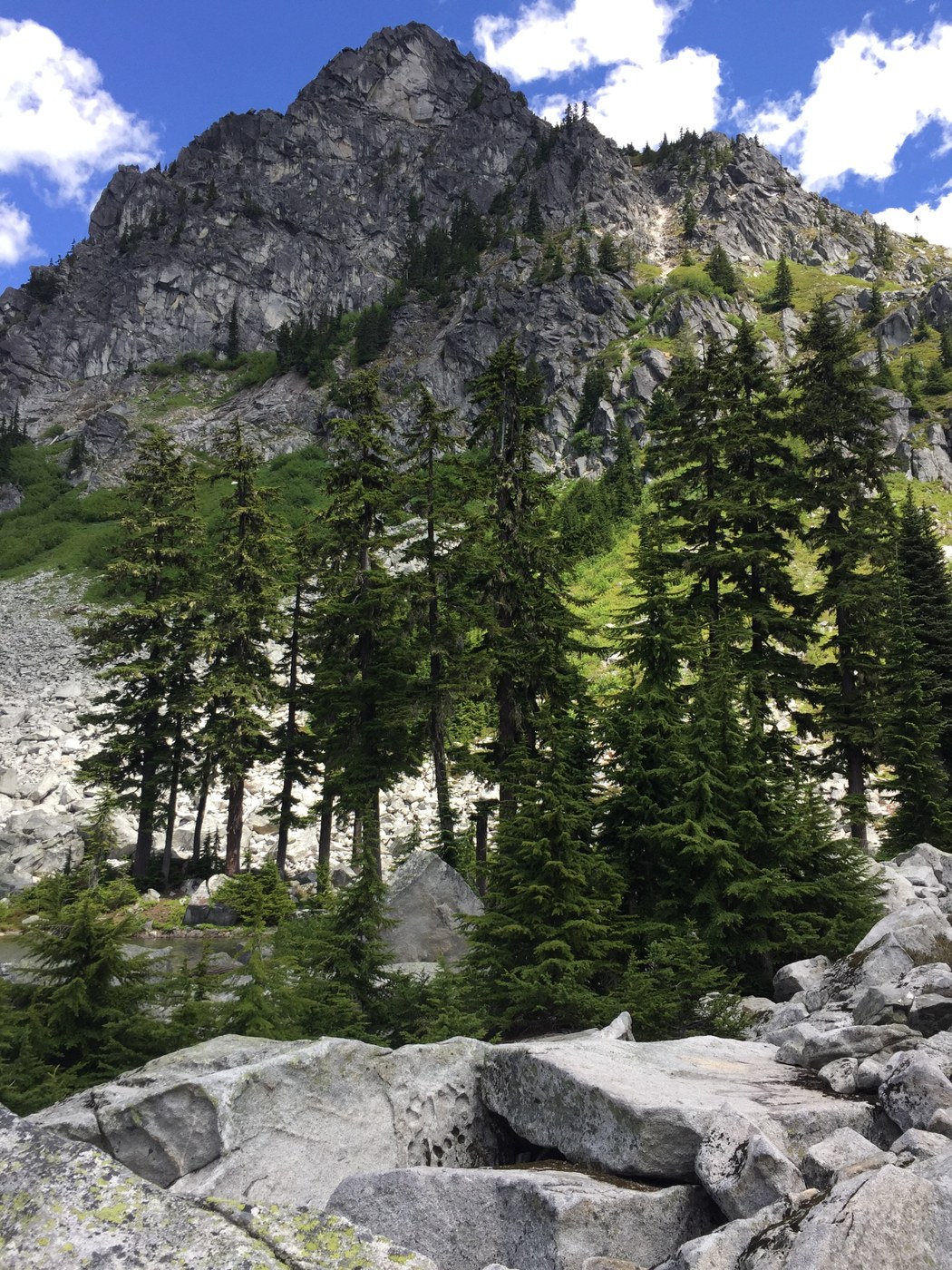 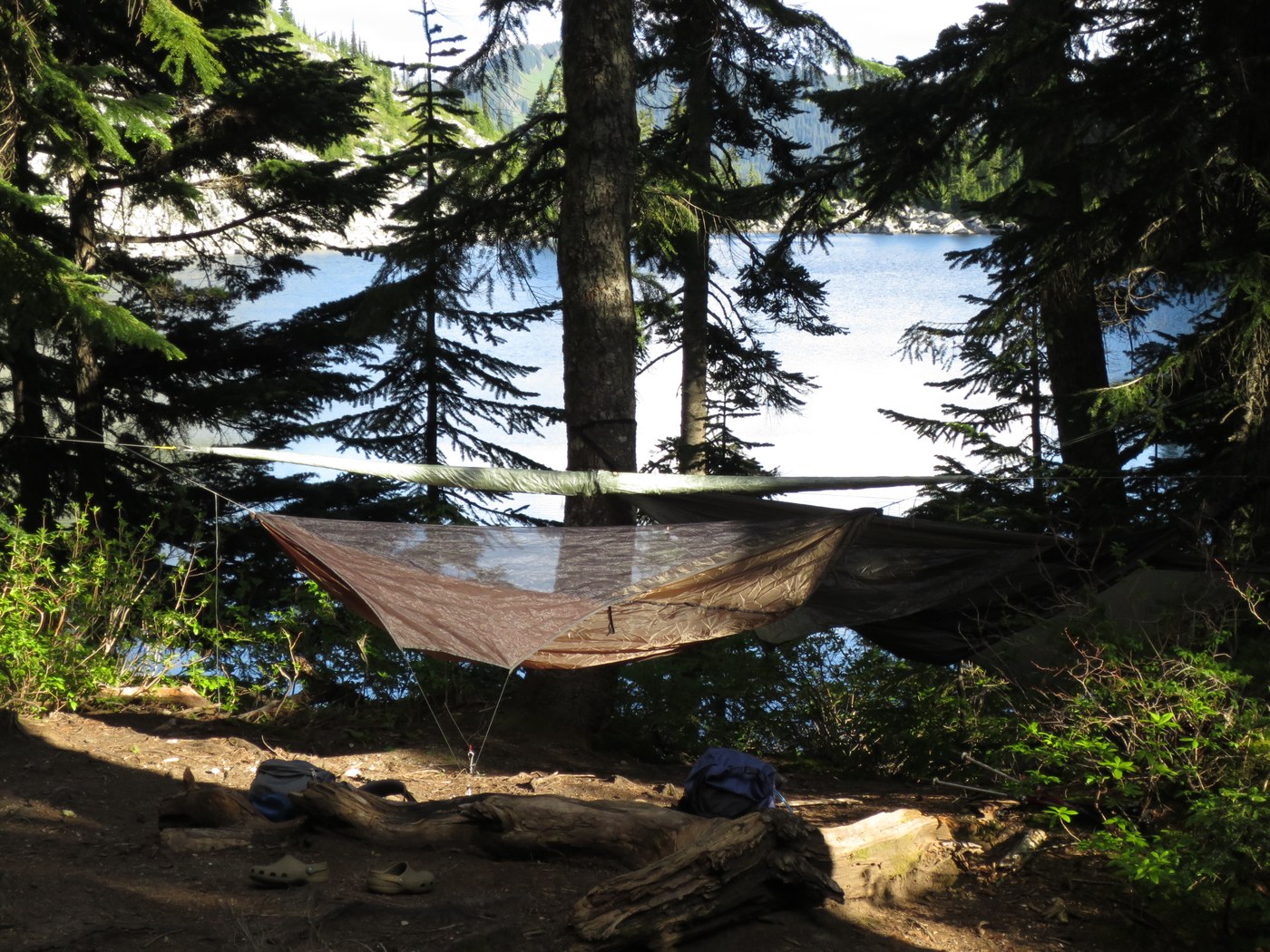 Will of Burien on Lake Valhalla