Skip to content
Mount Washington If you are looking to be demoralized, abused and risk many a potential twisted ankle at any point, all the while looking down (literally) on those doing Mount Ellinor, then Mount Washington is for ... https://www.wta.org/go-hiking/trip-reports/trip_report.2016-05-19.9697593090 https://www.wta.org/site_images/trip-reports/2016/tripreport.image.2016-05-19.1174149921/@@download/image/climbup.jpg

Print
Hiking up roots and rocks 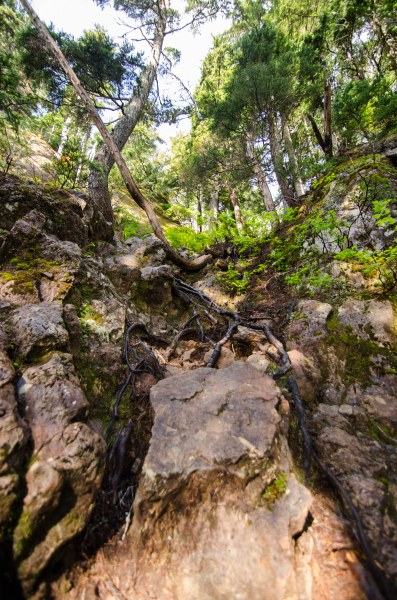 these trails in our Hiking Guide
If you are looking to be demoralized, abused and risk many a potential twisted ankle at any point, all the while looking down (literally) on those doing Mount Ellinor, then Mount Washington is for you. The trail starts near a boulder opposite the parking lot by 15 feet or so. It's not marked, as I don't believe this is even an official ONF trail. There is a waterfall just past the boulders blocking the road, but save a soak in that for your weary self after the hike. If you go farther down, there is a trail, but it leads to a steeper class climbing ascent of the mountain I believe. Once on the trail, you start going up. And up. And up. A blow down is present about an 1/8 of a mile in. Keep on climbing and you'll soon be using four points of contact to climb up roots and squeeze by tight spaces. Be especially careful of the roots. They are far more slippery than the rocks. After a half mile in you get to a little clearing that has a stream flowing through it. There are water sources going up, but here is a good place if you've gone through some of yours already. Here you will cross the creek to the north and find a rocky gully on the right. Follow this up and it will turn into a trail. After a little bit, you will come out into scree field with a large boulder. Follow the trail to the right of that boulder and on up. You will go into the trees again and then come out to a meadow area at around 4,900/5,000'. This part really gives you jaw-dropping views of the area around you. The area still has a lot of snow. I highly recommend an ice axe/crampons or microspikes and to go early in the morning when things are still frozen. I didn't make it to this area until around 10am and the snow was already slushy as it was hit by the sun first. Continue going up the snowfield (around 5,000') and to the left where you will ascend a bit and then cross horizontally above an area of rocks. Continue NE towards the summit just below a pyramid shaped peak above you. If you are paying attention to detail just below and to the right of the pyramid shaped peak (your left) are a couple of white memorial plaques (around 5,700') and a cross honoring a climber who died there back in 2003. If you climbed up to check this out go back N heading towards Washington. It was about here a mountain goat walked right in front of me, about 15 feet away. Little did he know he was leaving me a nice hoof pack of steps leading nearly to the summit to follow. You will descend a little bit and then cross an open area and ridge that leads up to Washington. How you get up to the summit is up to you. The path becomes a bit muddled here. There is supposed to be a small catwalk that leads around up to the summit, but I didn't find it, maybe I was just too tired. There are good hand holds going up, but be careful, it is exposed and class 3. Give a big wahoo! and head back down. Be very careful if you are coming down later in the day (It was 2pm by the time I was heading down), the snow got even worse. There are some well-exposed slopes you have to cross where the potential to fall and get injured is great . After I descended a bit I was able to start safely glissading down saving me heaps of time. I met what I presumed to be the same mountain goat heading down. He stared at me and then followed me as I gave him a wide berth heading down. After a couple mins, he moved on and so did I. I made it back to the car in one piece. I walked down to the waterfall and soaked my achy feet in the freezing water and then took off. Resources: Check out the Washington Scrambles book for good route info or more reports here on WTA. Also, see link below for an Outdoor Society blog on Mt Washington.
First open area 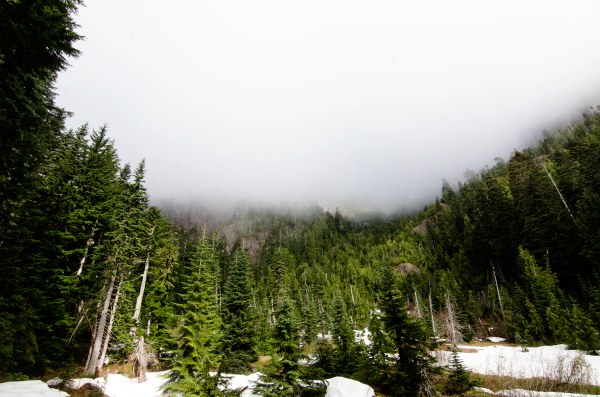 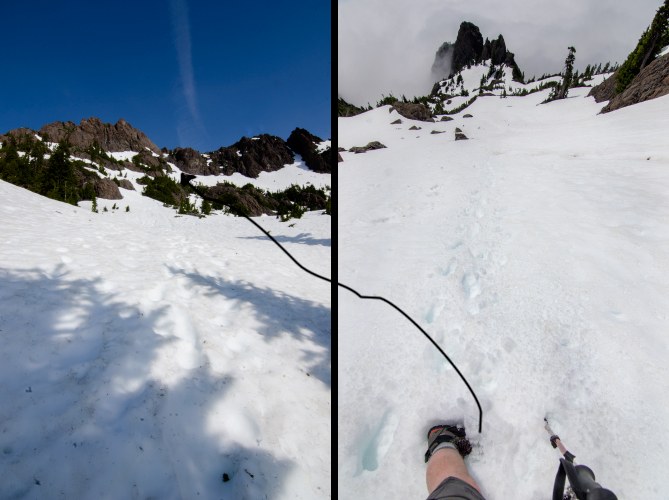 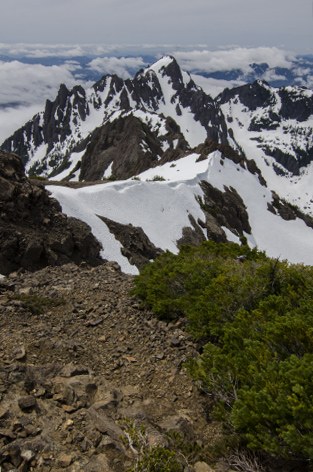