Skip to content
Wenatchee Guard Station I was inspired to try this winter glamping experience by the words and especially photographs of another WTA trip reporter, and several months ago I booked the Wenatchee Guard Station for a ... https://www.wta.org/go-hiking/trip-reports/trip_report.2017-02-13.5995760445 https://www.wta.org/site_images/trip-reports/2017/tripreport.image.2017-02-13.3286262370/@@download/image/DSCF9418.JPG

When I gained the final ridge before the cabin, this was the view that greeted me! If it looks a little fuzzy, it's because it's also snowing (and the wind gusts were fierce). 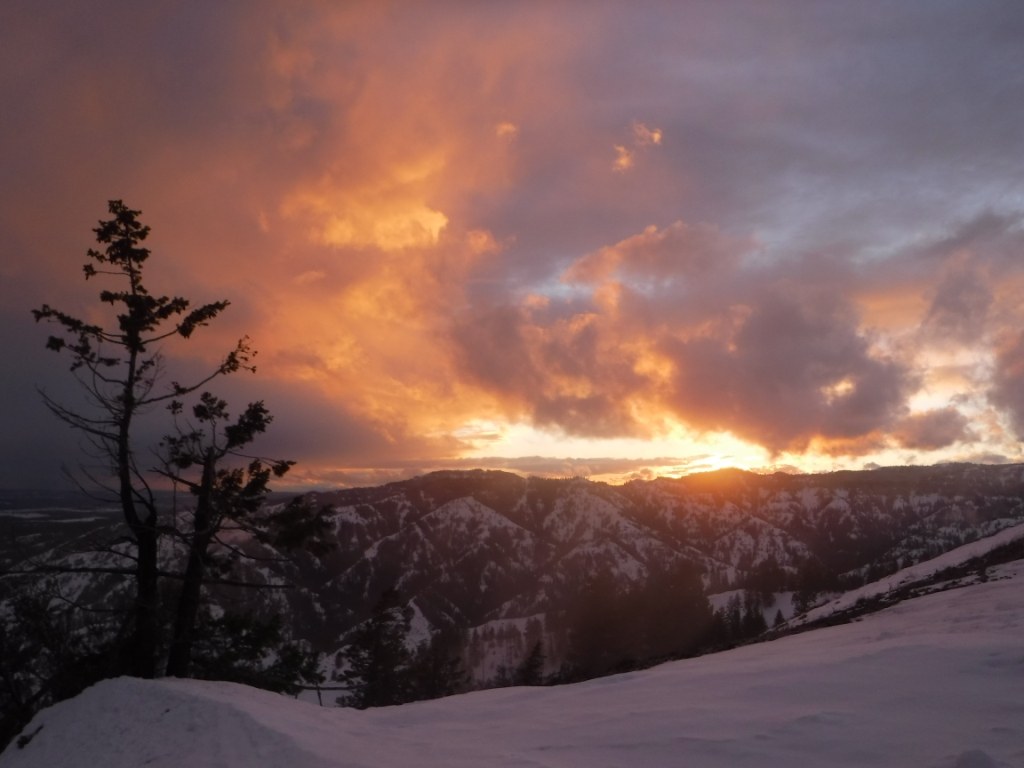 I was inspired to try this winter glamping experience by the words and especially photographs of another WTA trip reporter, and several months ago I booked the Wenatchee Guard Station for a two-night, three-day visit. I planned my trip to coincide with the full moon and penumbral lunar eclipse, which I later learned would also coincide with a comet. As it turned out, I didn't get to see the eclipse or the comet, as there was a Friday night wind and snow storm at approximately the same time these nocturnal events were happening. The snow died down later in the evening, so I did get to see the full moon, plus the still-nearly-full moon Saturday night (no wind that night, just bright skies and tons of stars). While it was disappointing to miss the eclipse and comet from such a perfect vantage point, it also reminded me why Forest Service cabin rentals are such a fantastic winter option: I was sipping tea and reading a book next to the fireplace while the storm raged outside. It wouldn't have been nearly so nice and cozy in my four-season tent. I also booked this cabin months ago because my only other cabin experience was at Snow Peak Cabin, which books solid months in advance. As it turns out, there are plenty of openings for the Wenatchee Guard Station. Maybe another trip report can inspire some more winter visitors for the place, as it's too awesome to sit empty for much of the winter. It has room for four guests who don't mind close quarters. There's a small bedroom with two cots, and a cot plus a futon in the living room. It has propane-powered light, heat, and a cook stove. The refrigerator is currently broken, but I just filled a container with snow and stuck that inside the fridge along with my food during my stay. It does not have water nor indoor plumbing, but there's a relatively clean CXT just a few feet away from the cabin door. The only drawback I could find is that the Guard Station is located on a popular snowmobile trail (much closer to the road than my map indicated). If I had it to do over again, I would plan this trip for mid-week. There were no fresh snowmobile tracks in the snow on my way in on Friday, but Saturday was very busy for motorized use. I was out skiing and snowshoeing most of the day, and found the motorized users to be very polite on trail: slowing down, moving over a bit to give me more room, and waving as they passed. However, when I was in the cabin, I noticed that nearly every group stopped just outside the cabin door & hung out for 20-30 minutes, sometimes with motors running (think snowmobile stench & snowmobilers yelling to be heard as they communicated over the noise). There's a large hill just outside the cabin, and several of the groups spent that time running laps on the hill and trying to turn the top into a jump (with much cheering and yelling whenever someone got some air time off the top). It was technically okay for them to do this, but it was frustrating for me as I took a snack & reading break inside (plus, I'll admit, it was a bit scary since I was there alone...I love solo camping trips, but I'm not used to having strangers so close by when I'm out solo). I kept wishing they'd have a little more consideration and move their show down the road a bit, rather than hang out within 20 feet of the cabin's front door. Fortunately, nobody was doing any night snowmobile riding this weekend, or at least not close by. By the time the sun went down, the snowmobilers had all gone home and I had the place to myself, along with clear skies and no wind. It was gorgeous outside, and whenever I got cold I went inside and warmed up by the fireplace. Things to know about this spot: 1) The access is via FS road in the summer, and you can drive to the cabin. There are good hiking trails nearby, but they are not well marked for winter use. From what I read in the register book inside the cabin, they may not be well maintained either. I tried to hike the Wenatchee Creek trail, but gave it up due to an uncomfortable crust on the snow (turned my ankles, even with snowshoes). But from other visitors' notes left in the register, it's possible to make an approximately 12 mile loop out of Wenatchee Creek + Indian Tom trails, with a short road hike at the end to return to the cabin. 2) In winter, the easiest access point is Cloverland SnoPark. It turns out the road isn't always plowed all the way to the SnoPark lot, however, so I had to start about 1.5 miles before the SnoPark. From reading the cabin register, this is frequently the case in winter. If the SnoPark is accessible, it's about 3.5 miles to the Guard Station. For me, it ended up being 5.8 miles and 1,435' elevation gain. 3) I used a gear sled to haul my supplies, and this worked great! Since I had a sled, I was able to carry in a water supply (you could always melt snow, but the snowpack isn't great currently--lots of debris in the snow I melted for dishwashing) plus an assortment of fun winter toys (my Nordic skis + Hok skis + snowshoes + microspikes, and I used them all by the end of the weekend). The last hill climb to the cabin was too difficult to attempt on skis while pulling a sled, so I did the final carry in two trips. Otherwise, it was easy to pull the sled up.
The snow covered Blues at dusk. 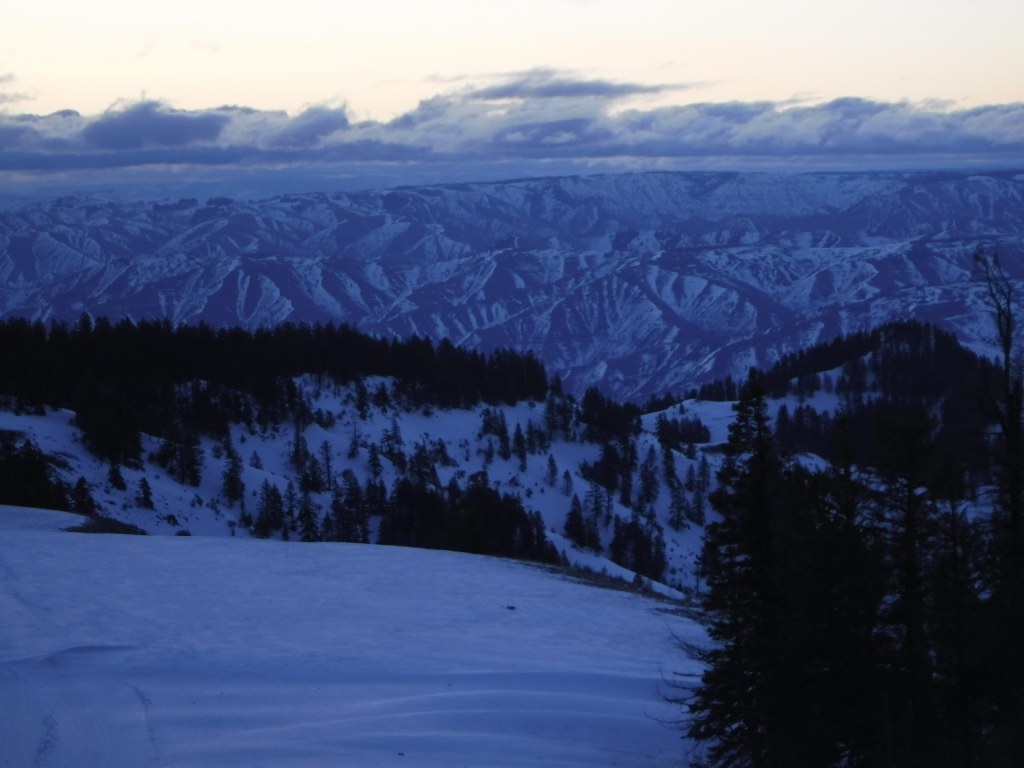 Wenatchee Guard Station under the stars. 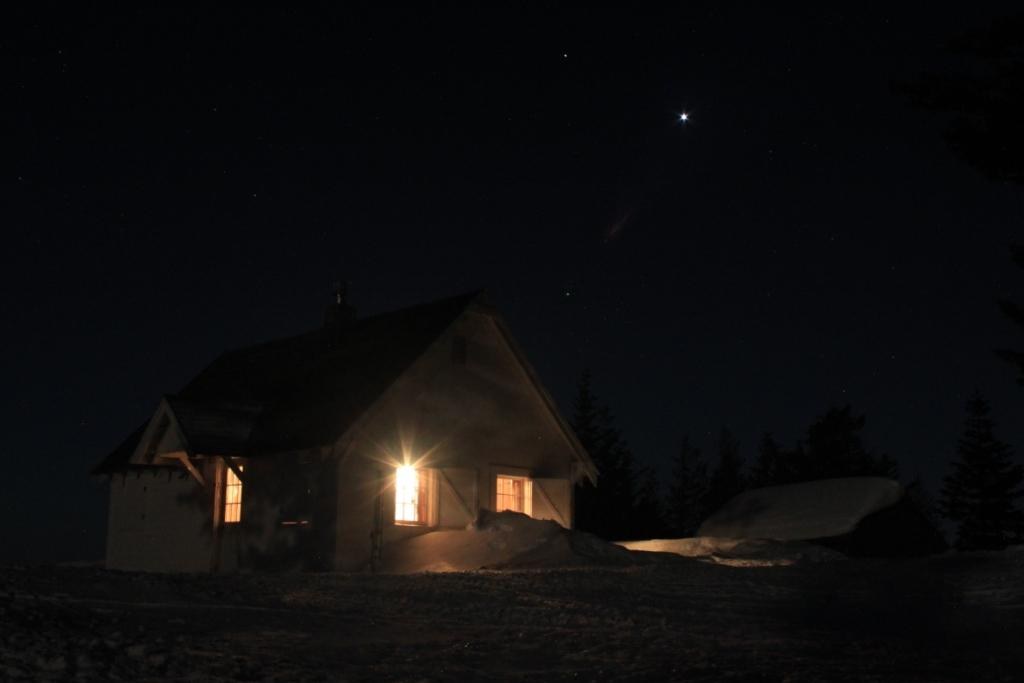 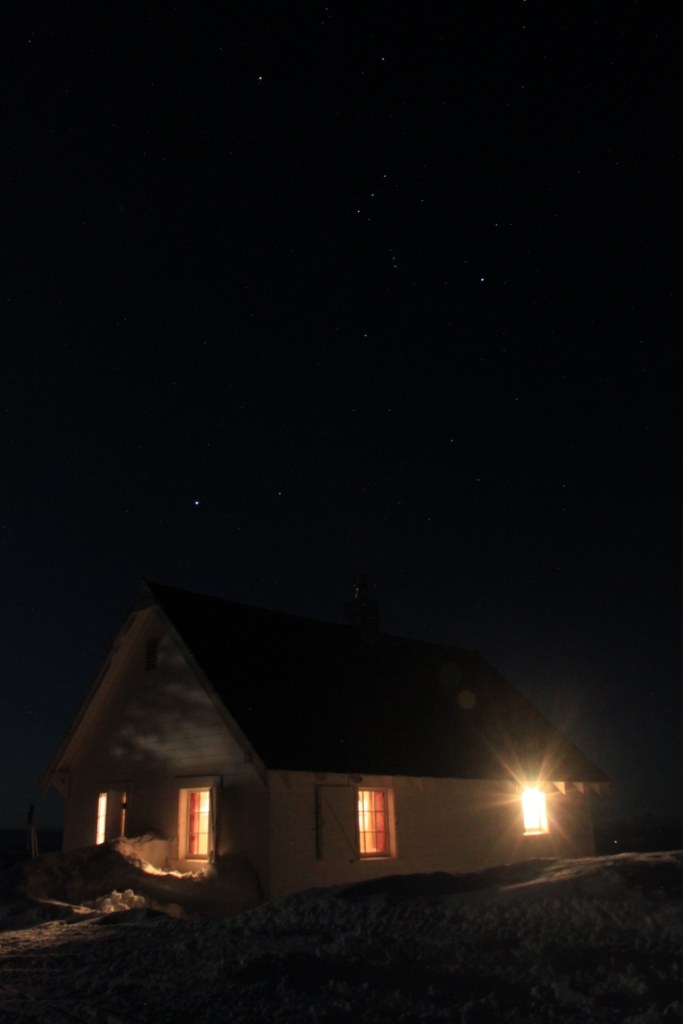