Trail difficult/impossible to navigate:
Trees down across trail,
Overgrown in places.

Mailbox from along the ridge 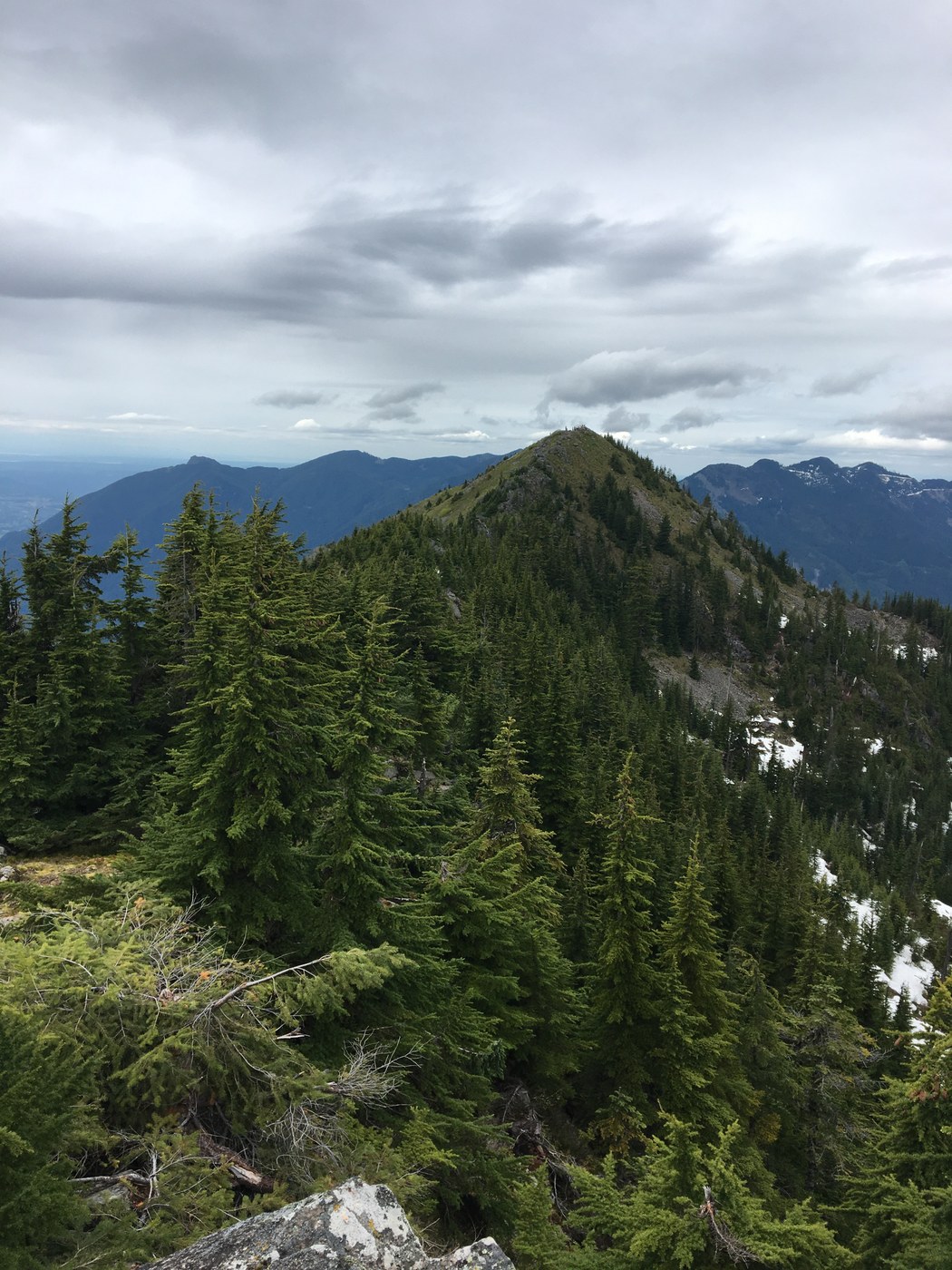 I got off the bus in North Bend about 10am Wednesday. Took the Snoqualmie Valley Trail to Middle Fork Rd to the Mailbox TH, took about 45 min. Nice trail, good ride.

Stached my bike at the TH, and headed up the old trail. Nothing out of the ordinary. Lots of Corallorhiza along the trail, maybe a week from peak bloom. It was my first time up since the reroute at the top; it is excellent. Big thanks to WTA et al. for all that work.

After lunch on Mailbox, I headed east. Not a traverse for the faint of heart. My speed dropped to basically zero. Between Mailbox & Dirtybox there a number of fairly sketchy spots, some fairly exposed 10 or 15' scrambles. I took off my pack and lowered it before me in two spots. The route was brushed in the last couple years, so the route is fairly easy to follow thanks to the topped krummholz and pruned branches. The geocache showed two previous summits this year, one in May and one last week. A second geocache in a nalgene was placed halfway up a snag at the summit. People are crazy.

I kept heading east. Still very slow, still quite a number of gnarly sections, definitely some class 3. A couple times it seemed like there wasn't a route onward, but there was a way. The last bit up to Dirty Harry's was especially spicy, nearly vertical and if not for the ropes would have been impassable. Took me 6.5 hr from Mailbox TH to Dirty Harry's Pk.

From Dirty Harry's, my plan had been to continue on to Webb Mtn and spend the night there or at Thompson Lake, then continue down Granite Creek back to the TH. However, given the late hour, I decided to cut it short. I headed down and over toward Dirty Harry's Bathtub. The trail became overgrown shortly after leaving the main trail, so I elected to scramble on the talus. Got to the tarn shortly before sunset.

Took the trail down the next morning. Dirty Harry's trail is weird. It's so obviously a road, but it's just such an odd road. Thanks to WTA for the drainage work & making the trail more interesting. The lower sections nearer to the Balcony are a bit confusing, but easy enough to find your way. Looking good, though, the reroute here is also pretty good.

Took the road west toward the fire training center. The bushwhack around the training center was quite something; doable, but slow. Eventually I hit the Training Center/Mailbox connector trail, back to the old trail and back down to the TH.

The bike trip back to North Bend was quick, and all downhill.