Once you make the turn off the converted Forest Service road (about a , the trail is generally straight up the mountain. It's comparable to Snoqualmie Mountain, Cable Line, Old Mailbox, Putrid Pete's Peak, and most similar to the worst part (the last part) of Green Mountain or the ZigZag Trail. It's not as bad (either up or down) as the Kamikaze Trail, for comparison. It's not too slippery, and there aren't any technical sections until 4700'+, where there is some mild scrambling with even milder exposure. Most of the time, you're just walking up (or down) a very steep dirt path between trees. The trail up the mountain is only 2.0ish miles, with 2700' elevation gain, so be ready for that. The summit is very cool - not quite clear all the way around due to trees, but lots and lots to see, all the way to Glacier Peak, a gigantic Mt. Rainier, and Silver and Abel Peaks are close enough to look them up after the fact to see what it takes to get up them. Despite most of the trail being normal (but steep) forest hiking, the rocky section toward the top is something different and challenging, without much risk to speak of, due to the trail being along a bit of a ridge with some width instead of a crazy drop-down on both sides.

This is a remarkably untraveled trail: it's considerably farther from Seattle than the other I-90 hikes, and, like the other "straight up the damn mountain" hikes, it's very strenuous, which keeps many people away, I suppose. I was there on a crystal clear June Saturday, and the only other people I saw on the mountain trail were a couple who took a (very) wrong, very out-of-the way, turn while on a rockhounding trip along the converted Forest Service road which starts at the same parking area.

"Rockhounding?" Yep. I've never heard of it, either, but from talking with the dozens of people walking past me prior to the turn up the mountain trail (again, Humpback Mountain Trailhead #2 on Google Maps), the Hansen Creek area is one of the best spots for finding Quartz Crystals and Amethyst (Google tells me it's fancy, purple quartz), so there were a bunch of people there with gear to find those rocks. I've never come across "rockhounds" (learned the term from someone walking past me) after lots and lots of hikes all over the area, but who am I to have opinions about other people's hobbies -  I literally walked uphill for two hours straight to take the same set of pictures everyone takes when they get to the top, so there's my hobby...

The trail wasn't yet 100% snow free, but nowhere along the path was snow-covered, so I suppose that's a 99.9% snow-free situation currently. If you really wanted to walk on snow, you could.

Bugs were annoying enough that I needed to use bug spray, especially as I got toward the top.

Aside from the elevation gain, the truly challenging parts were 1) getting down from the summit - there's some very, VERY steep sections with slippery dirt that really required going down on my butt and using tree branches to hold onto, and 2) at the beginning of the way up, finding where the trail is after the turn-off from the forest road section. The turn off of the forest road portion is obvious - there are blazes, and it's exactly where the map says it is. The trail from there is NOT immediately obvious. It will look like it goes straight up a super slippery, super steep washout, but the trail actually ducks between a small gap between two trees immediately after the forest road trail turn. Basically, once you turn off the converted forest road trail, look to your right for the gap in the trees. If you don't do that, you can go straight "up," but once you're in the trees, you'll need to work your way to the right to meet up with the trail. At that point, the trail is exactly where Gaia says it is, so, as usual, Gaia is worth the money, in my opinion. For a non-maintained trail, it's in great shape, without any major obstructions along the way. Trees are pretty dense most of the way, but once it starts to open up, it really opens up.

Like any of the really steep forest trails, this could be a pain in the butt, verging on a remarkably bad idea in the rain, so keep that in mind. 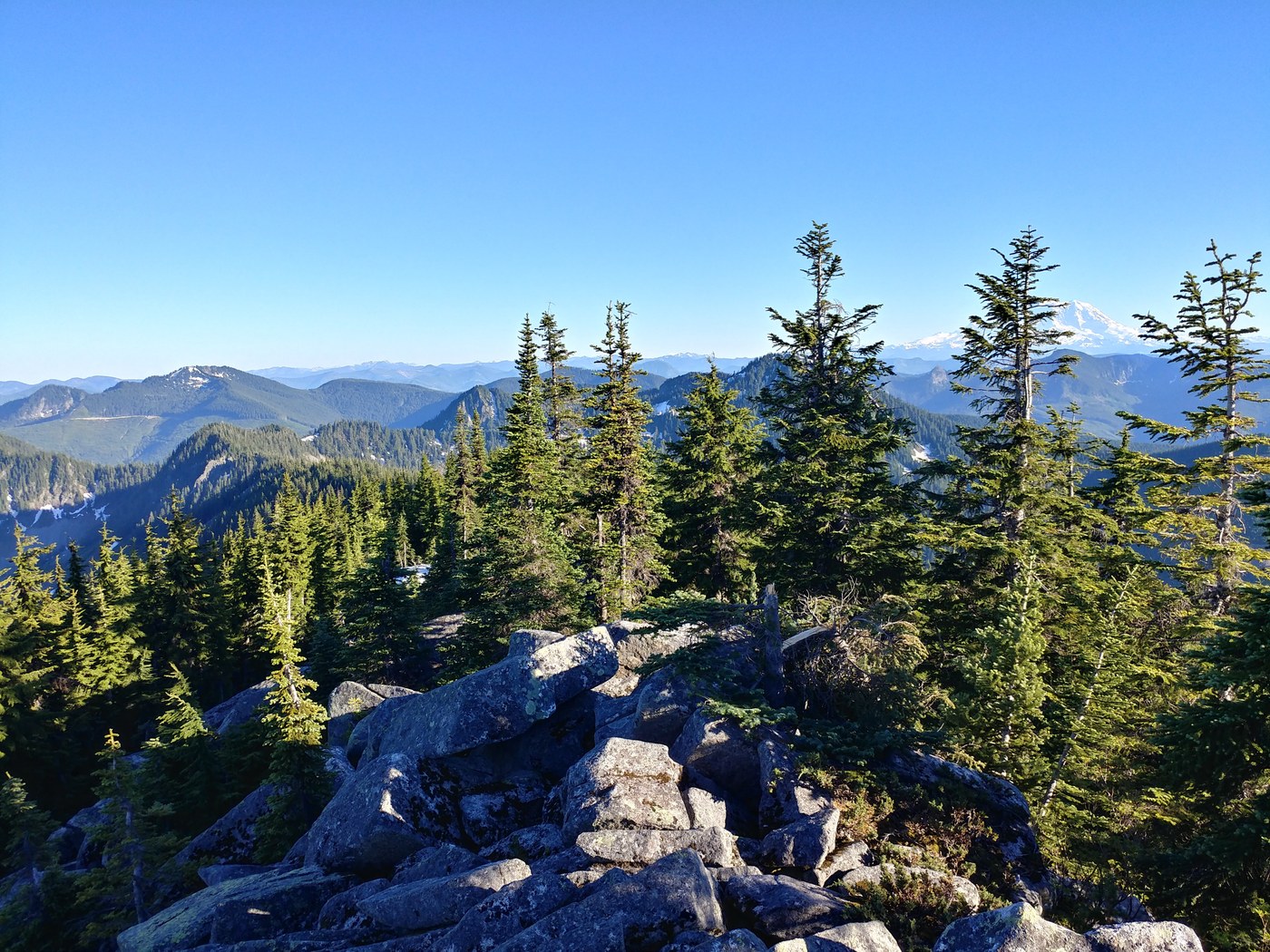 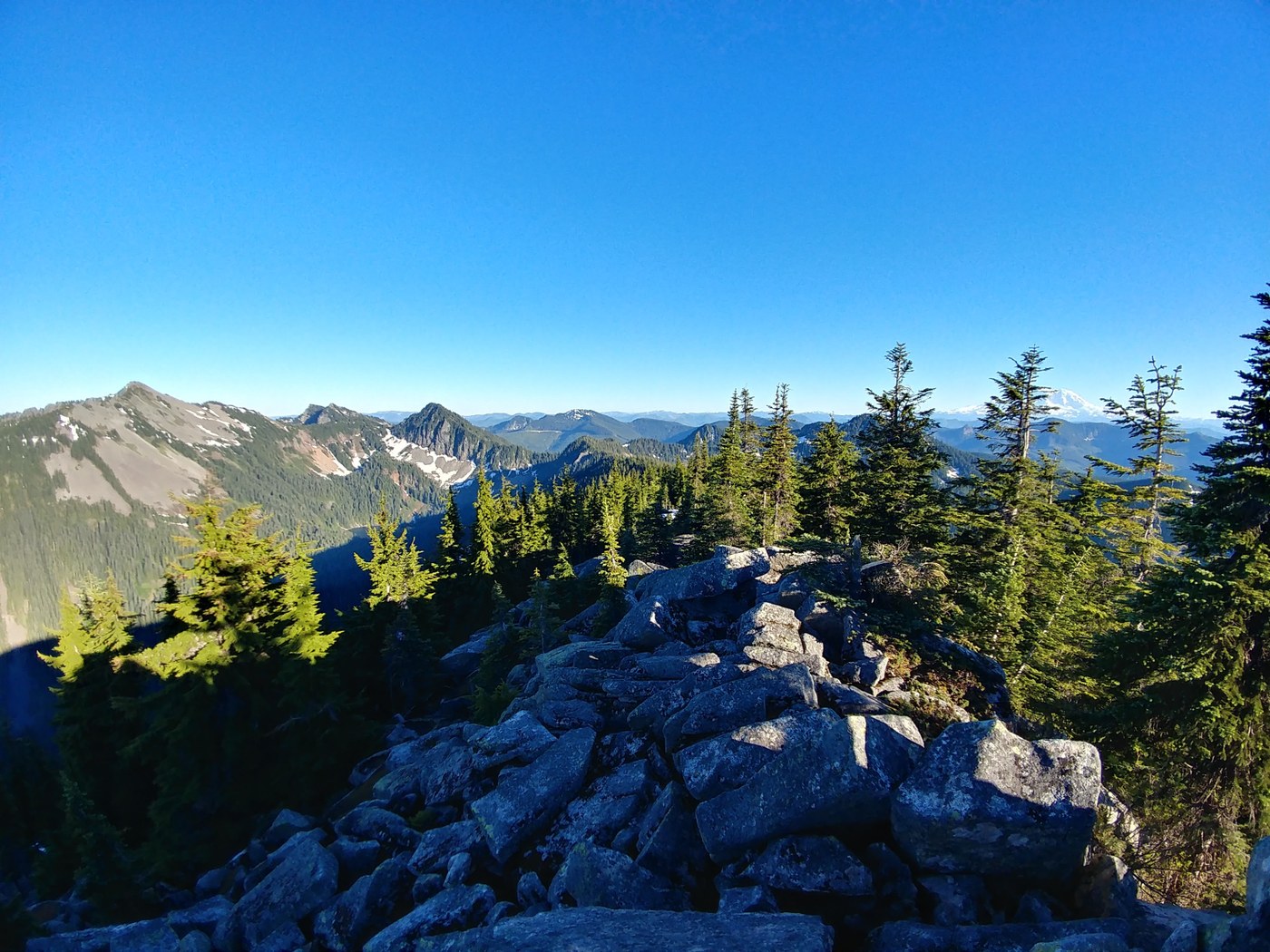