Trail difficult/impossible to navigate:
Trees down across trail,
Mud/Rock slide or washout.

JUST DON’T DO IT.

And if you are still thinking about doing it, it would be 18.9 miles RT from the trailhead off 5701.

Be back to write more after I recover…

So, a bestie hiking buddy and I set out for a few days on the Siouxon Creek Trail as we have been planning for several years (before COVID and wildfire closures).  Our plan A was to hike into the Wildcat Trail junction, assess it and the Chinook Creek Trail and potentially make a loop up to the Huffman Peak Trail, cross the ridge and back down to Siouxon Creek again. Long story short, both trails are a mess that my friend couldn't do so I opted to day hike Horseshoe solo and she would head back down Siouxon to snag a campsite near West Creek.

The trail was supposed to be about 6 miles so I told her to give me 6 hours to meet her at camp.  I also reminded her I had a PLB so not to worry if it was later than that.  I started up the Horseshoe Ridge Trail about 400 feet past the Wildcat Trail junction just after 9am, heading up anticipating a set of switchbacks to take me to the ridge.  The trail was overgrown (as in vegetation growing up into it from lack of use, not necessarily crowding) and the tread was sloughing off in many places.  The trees showed burn scars here, I counted 76 trees across the trail in the first 1.2 miles, luckily only one pile that required me to take my pack off and do an under/in between maneuver.  There were two small streams, the last water sources I would see until back down on the Siouxon.

After 1.2 miles and 1000 feet of gain, the trail loses any pretense (AKA pesky switchbacks) and heads STEEPLY up towards the ridge.  More fallen trees (maybe 60?), more devastating burn and another mile had me at a little over 3100 feet and leveling out on the forested ridge where I thought things would be easier.

Let's just say that infrequently traveled trails, albiet flat, mean a billion spiderwebs. Thankfully, most did not have spiders. My cursing the constant barrage of silky webs was not all in vain, when I heard gunshots off in the distance I knew no one would mistake me for game.  I did observe my hunter orange percentage was under 15% but thankfully not 0%.  Anyone might have heard my occasional, "I AM NOT A DEER!"

There was no bootpath to the high point on this side of the ridge and I didn't feel the need to start one. The best views were probably back at the burn area I had slogged up. Did I mention there was a helicopter cruising the valley when I came up through that area?  Both my friend and I were hoping it was not for the other of us.

I reached the road intersection 3.42 miles and about noon and I knew already the trail was not the promised 6.1 miles.  Coming this direction, the trail took a little searching as it was up the road to the left (there is signage once you go that way).  I had planned to eat lunch about this time but I told myself that it wasn't far until I would break out on the other ridge and maybe have a nice view so I continued on through the forest, past the other road intersection and through a lovely patch of blueberries I was not motivated enough to stop long and enjoy.  Maybe it was the 155 trees I had already climbed over/under?

At 4.1 miles and at 3485 feet, I was approaching the ridge.  I knew I was in trouble as the trees were all black, the sandy soil was exposed and sections of the trail were gone.  And the wind was picking up.  Super.

I continued about a tenth of a mile and decided it was lunch time (safer to take shelter for a bit) and tucked myself far enough into a rock outcropping where trees wouldn't fall on me and hopefully a wild cat would not pounce. While noshing, I could see through the spiny tree trunks West Point and Calamity Peak on the other side of the valley.

About 1pm I continued along the ridge, guessing that it was a fairly straightforward "ridgewalk" and I'd be heading down to Siouxon shortly.  Mt. St. Helens was slightly visible on my right and I took it as a good sign.

Nope.  Aside from well over 100 fallen trees before the trail left the ridge, there were so many sections where the trail was gone. Simply sloughed off, overgrown or debris slides.  Particularly on the slope when you have to go around rock outcroppings.  GPS was used often to know which side was best, as well as veggie belay. Mind you, options were limited since quite a bit of it was charcoal.  Just think, three points of contact.  I was so tired.

Shortly before 5 miles in, there were a few places where the "forest" opened up to meadowed slopes but there was less than a hint of game trail to follow across them.  Elk Mountain, Davis Peak and Bunker Hill were far on the horizon but no real place to sit and enjoy.

I just kept waiting for the trail to drop down off the ridge and it seemed to take forever.  I can't remember the last time I had to check the GPS so many times in hope of finally getting to drop down in elevation.

I don't know why I was so excited to get off the ridge because the "best" was yet to come.  At 5.9 miles and 3150 feet, it was clear the ridge was done and it was time to drop.  I stopped for a few minutes to take in some more grub and water (thankfully I had brought 3 liters) before heading down.  For those of you paying attention, there is only supposed to be .2 miles left in the trail and it ends at 1200 feet in elevation. Turns out I had 1.4 miles to go for that almost 2000 feet descent. And it was almost 3pm, I was definitely not going to be "home" in time to avoid worry.

It would be generous here to call this part a climber's trail or even fisherman's trail. And when you are not slipping on duff, loose rock and gravel, the trailing blackberry is vying to take you down as well.  Luckily, there are not near as many trees across the trail!  And it is clear that someone has been at work on a few places, cutting the trail back into the slope.

I arrived at the junction with Siouxon at exactly 4:30pm, 7.3 miles under my belt.  That highway of a trail never felt so good.

I don't say this very often, but I can not recommend this trail at this time. Surprised? For all the the energy expended, the payout was not worth it. If you still feel compelled and want a good workout, climbing that section closest to the Siouxon Creek TH just up the 1.4 miles to the viewpoint would be enough as a day hike but your knees won't thank you. 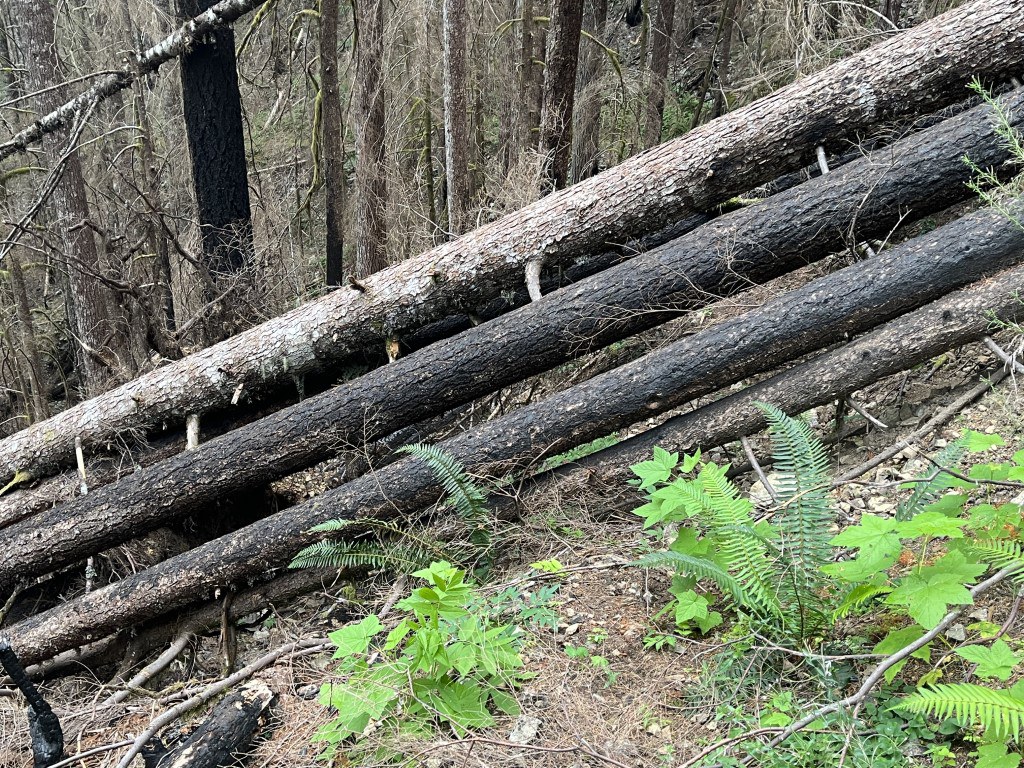 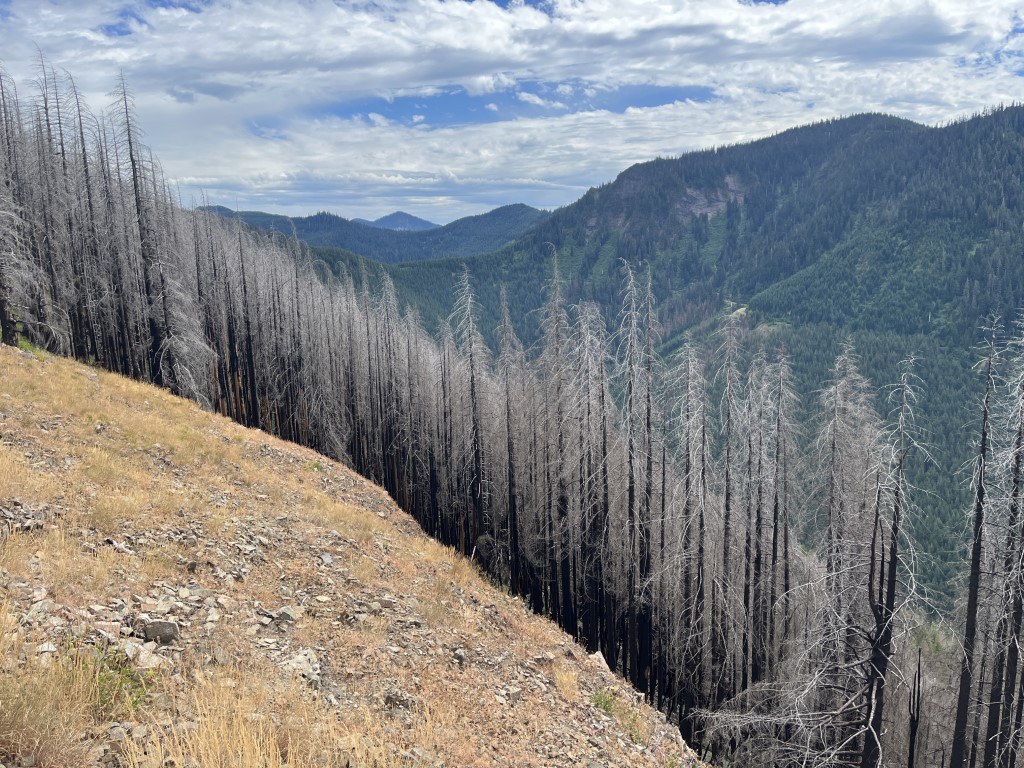 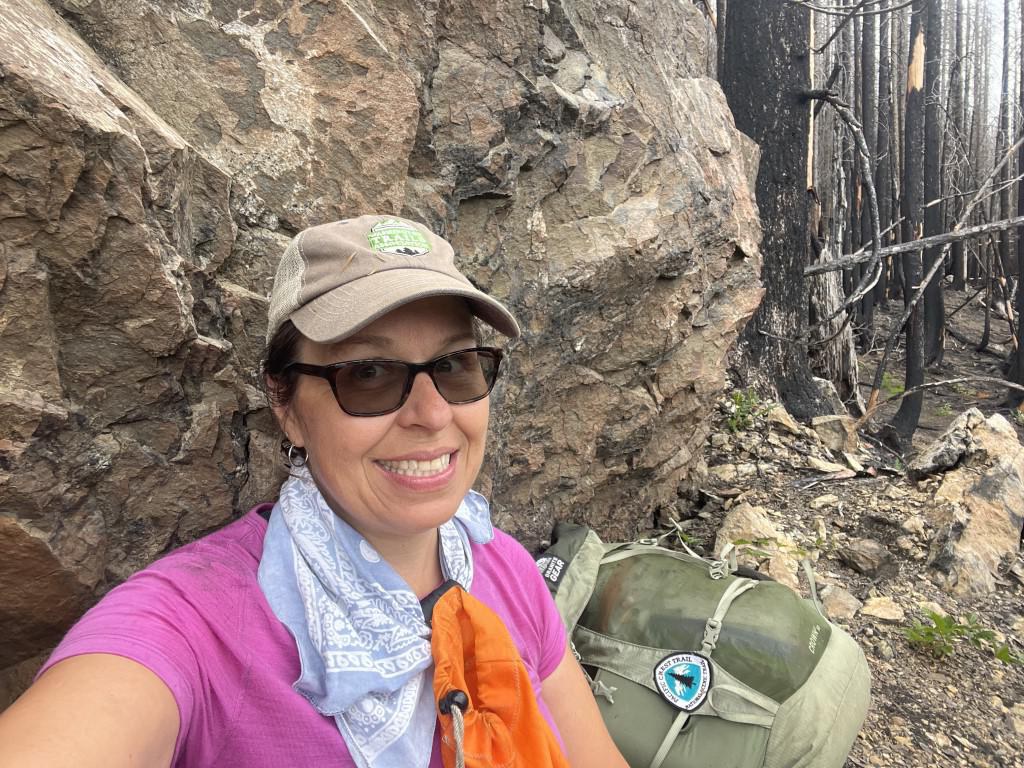