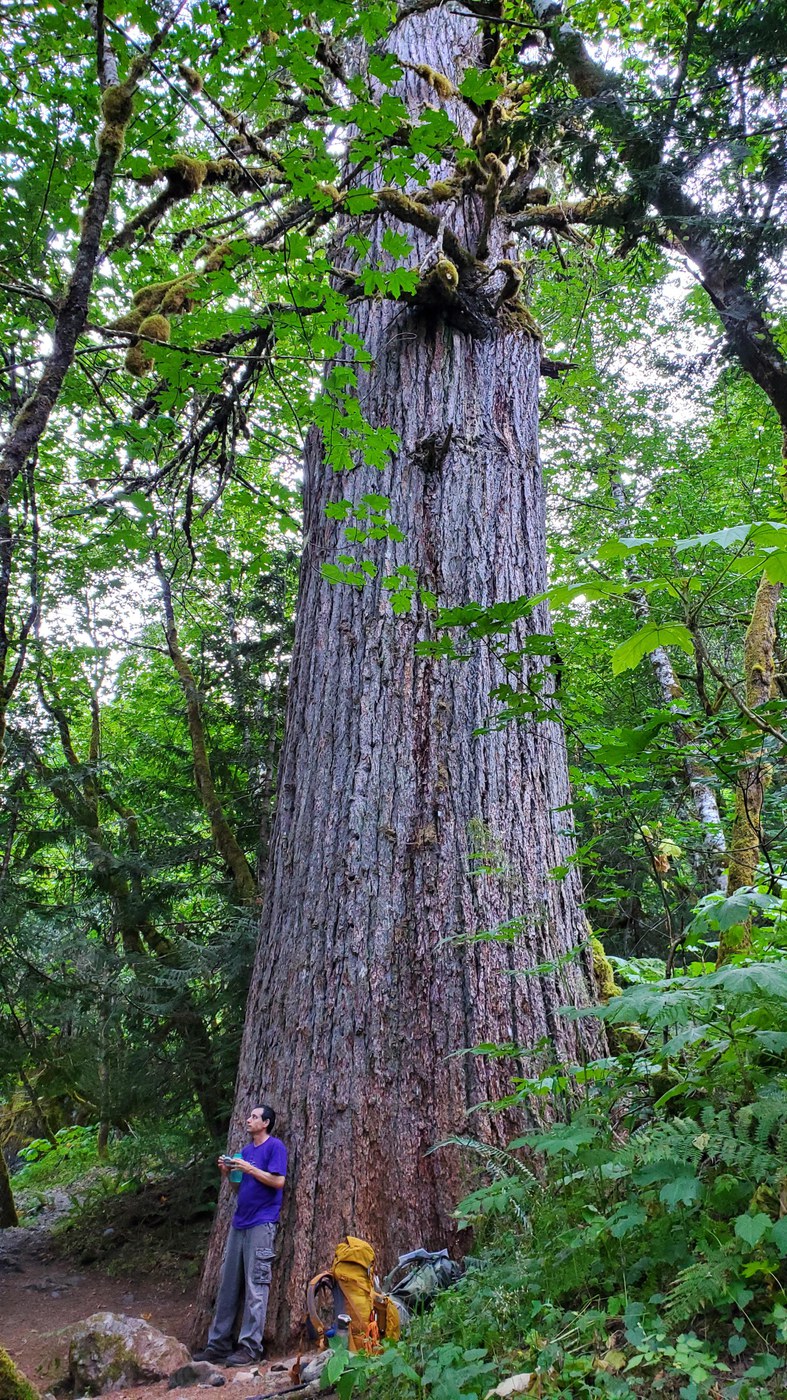 We dared make our first backpacking trip as a couple since the 90s, in the middle of Labor Day weekend, betting in favor of the ambitions of other local backpackers - and winning :) We heard from other hikers of Big Heart being super-busy, but our planned far-less-ambitious camping location at Trout Lake was nearly half empty even on Saturday. This allowed us to carry only half the weight up to Malachite+Copper, which was as high as our medium-grade hiking bodies could carry us the next day (and back down to the trailhead after that). It was a plenty amazing trip for us anyway! On to the trip itself:

We arrived at the trailhead ~4pm. Even though cars were parked almost 500m before the trailhead, we arrived late enough for day hikers to clear out some of the main parking lot spots.

The WTA hike description makes passing mention of "occasional exceptionally-large trees" near the start of the trail, but one of the trip's most amazing surprises was the amount, diversity, and uniqueness of old-growth trees, both down-trail and up-trail. Ironically, the very hugest giant by far, is the first one you'll bump into, right on the trail about a mile in. We believe it's a Western Hemlock; to my knowledge such huge W.H.'s are a rather rare sight (see pic).

The pleasant Trout Lake camping area itself is a mix W.H. - Sitka Spruce, with some Old Growth trees particularly of the latter. The squirrels loudly harvesting spruce cones was both entertaining and a bit worrisome; as Orna said, don't stand under a Sitka this time of year!

Then the next day on the trail, in the beginning of the climb we saw the same two species' Old Growth as well as good old Western Redcedar, an expected sight at PNW river valleys. But then, surprisingly around 3000 feet quite a few big-ass Douglas Firs showed up. We were so surprised we took a pic of the first one, but they continued on as high up as >3500 feet; I don't recall seeing many Doug-firs that high at this latitude.

Around that elevation, we were excited to see some of the less common members of this sacred family of local giants. I believe they were Grand Firs and even some Yellow Cedars, which may have been our first-ever Old-Growth sighting in the wild. Lake Malachite's south beach is graced by an Old Growth forest dominated by the former.

Besides that: the lakes, streams, waterfalls, cliffs, and peaks were beautiful. The people mostly very nice and helpful. I'm sometimes chatty on the trail, so we've learned that there's been a diversity of itineraries and trip durations among backpackers. Which means even though it was busy, anyone could find a spot and enjoy their trip. Definitely more backpackers coming down on Sunday than up.

The trail traversing a seemingly endless sequence of rock slides, is challenging for less-young or less-fit limbs, more so on the downhill than the uphill; and mosquitoes are definitely there to enjoy the party.

Oh! to end on a sweet note, there was an abundance of blueberries from 3500 feet upwards, and almost none of the hikers (except us of course) stopped to forage them. Some of them strangely tasted like onions, but most were delicious. Enjoy!

The first of many, surprisingly-high-elevation Old Growth Douglas Firs. 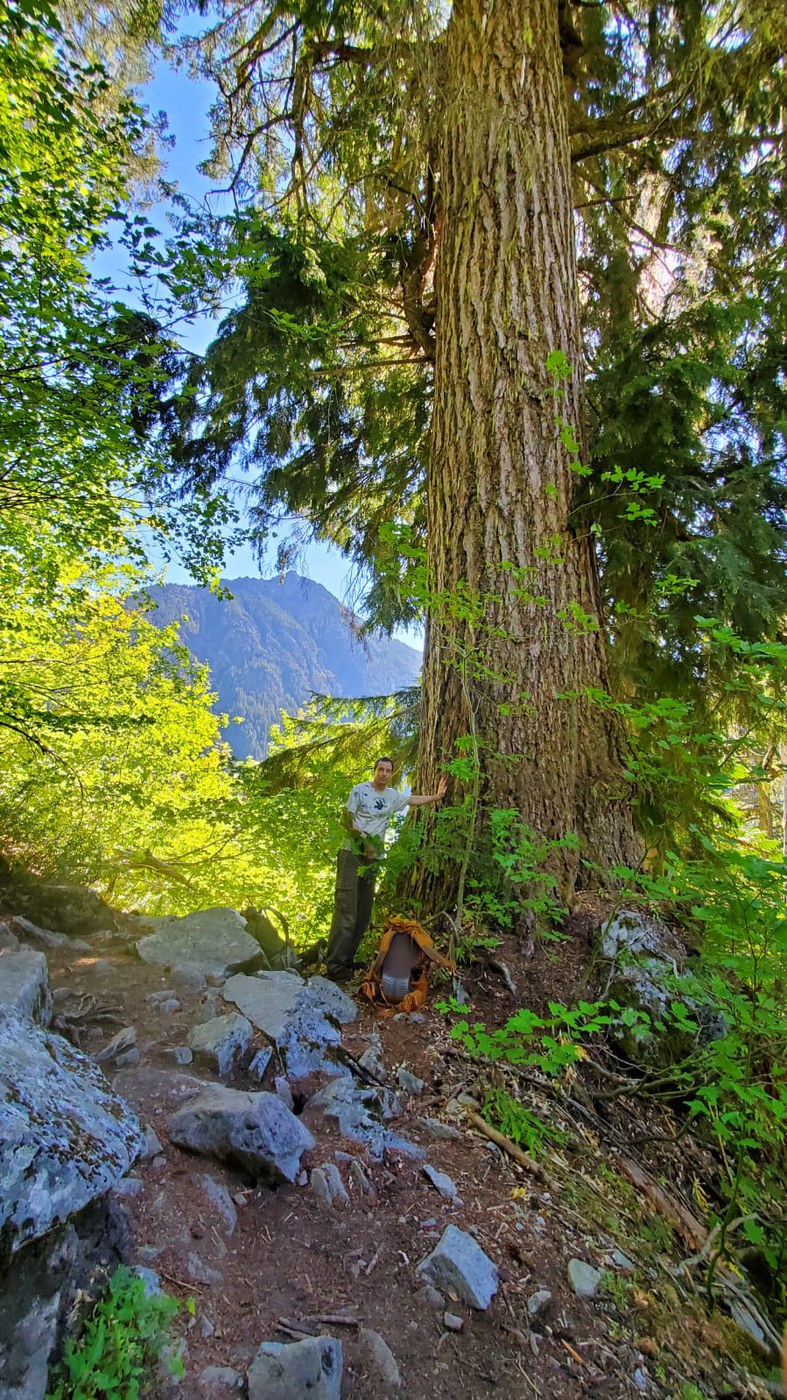 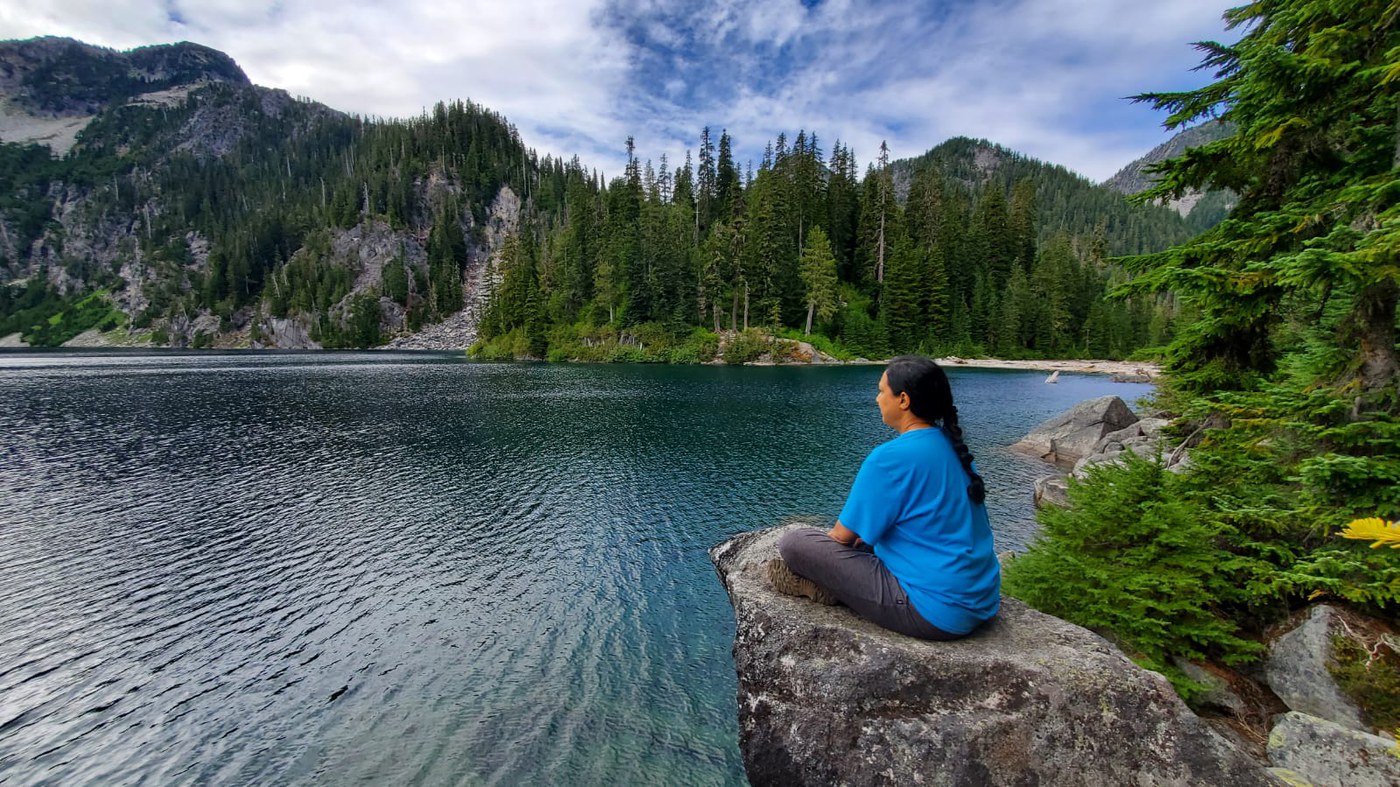 Hiked this trail yesterday and was super impressed by the trees. I am still figuring out my trees, but I guessed that huge one was a Douglas Fir, because from far away the upper branches looked erect, rather than droopy like Western Hemlock. Is there something that tells you it's not a Douglas Fir?

The plethora of large dark purple/green cones lying on the ground Trout Lake were Pacific Silver Fir cones... not sure if those were the same ones the squirrels were dropping (they weren't doing that when we passed through).

Hi Phil, thank you for your insights!

We are not tree experts, and could not find fresh cones around the tree as those are easier for telling the two apart. But I still think the giant is a Western Hemlock. Here's why:

2. There was an abundance of younger and therefore easier-to-identify Old-Growth W.H.'s all along this part of the valley. By contrast, the Old Growth D-Fs started only ~1000 feet higher and we saw them only in the south-facing (sunnier) slope of the side Copper/Malachite side canyon.

3. In both species, the bark grooves get thicker and thicker as the tree ages, to the point that a 500-year-old giant's lower trunk looks very different from a 100-year-old's. Because W.H. has finer bark grooves, very often the more ancient W.H. we've seen (and which were externally verified as such) had bark not unlike a 50-200 year D-F's. There's of course lots of intra-species variation, but ancient D-F bark is usually far more dramatic. See e.g. the D-F pic in our post, probably much younger but already having thicker grooves, or Figs. 44-45, here: https://www.dnr.wa.gov/publications/lm_hcp_west_oldgrowth_guide_df_hires.pdf

But of course we may be wrong. The literature says lower-elevation W.H. struggles to live past 300 years but can far exceed that at >3000 feet. This one is at ~2000 feet and in a relatively cooler moister microclimate, so seems somewhere in between.
Would love to learn the truth from someone more knowledgeable!

Oh, and thank you about the Silver Fir addition. Good chance we've mistaken many of them for Sitka Spruce, although I do think we saw some of the latter. That would make this forest home to at least 7 conifers, at least 5 of them with Old-Growth trees!

I agree that very large WH can be difficult to differentiate from DF sometimes. I just look at the ground in that case, to see what kind of cones predominate. :)

I wonder if your high-elevation DFs were in fact mountain hemlocks, which grow above 3000'. Their bark is also deeply grooved, but they have shorter needles like a hemlock, but that surround the twig rather than lying mostly in a single plane as the WH leaves do. Mountain hemlocks have larger cones than WH, but smaller than DF without the "feathers" or "mouse tails" of the DF.

My favorite reference is Pojar & MacKinnon's "Plants of the Pacfic Northwest Coast".

Sounds like a wonderful trip! So glad you got to see some of the amazing big trees on this trail and enjoy the lakes.