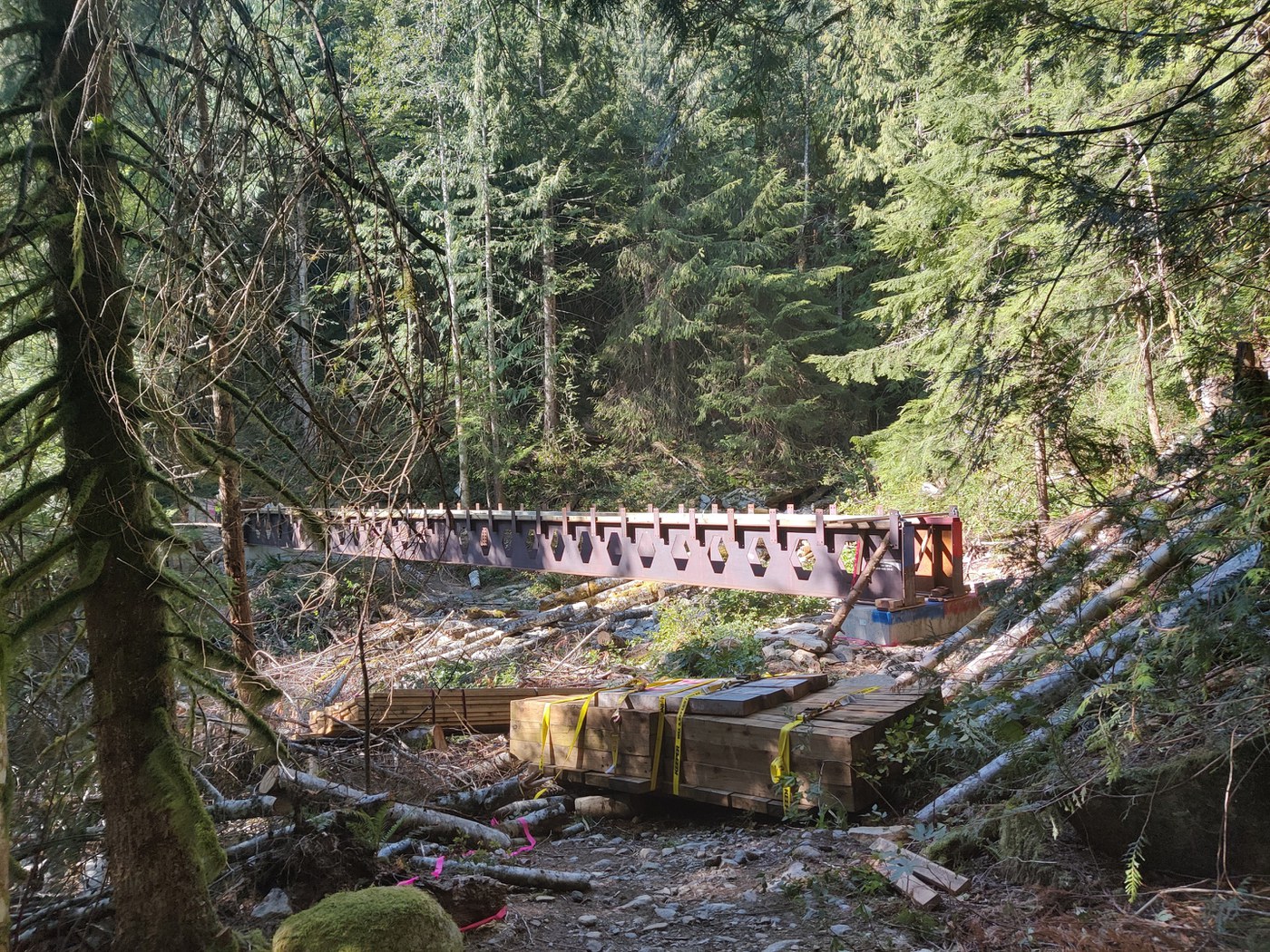 Wow! That was a steep and very slippery hike! If Mt. Teneriffe's Kamikaze trail or the old Mailbox trail bore you, the upper section of this hike will be right up your alley. Plenty of Type 2 fun to be had.

I parked just after crossing the bridge across the Middle Fork and proceeded across the road to the unmarked Sitka Spruce trail. Very early on there were a few small stream crossings, which I was surprised were flowing. I'm guessing in runoff season these might be much more challenging than the simple rock hops I had. Beyond this section there was zero water so be sure to bring enough water. I only used 1L, but it wasn't a hot day.

The Sitka Spruce trail is in great shape; brushed out a few feet on each side and only one minor blowdown to step over. The nicest sections of cushy forest trail on this hike are found here. Thanks to those who've kept this trail functioning since it's a nicer approach than the CCC road/trail.

When I started my hike I heard a big helicopter hovering uphill. As I crossed the CCC trail it became clear the helicopter and I were headed to the same spot. Shortly thereafter I ran into a Washington Conservation Corps worker who stopped me and explained that they were moving bridge supplies up to the Brawling Creek crossing at 2,400'. She requested I take an early lunch break to wait out the work. After half an hour I decided, with her permission, to proceed uphill. While hiking on I watched two huge girders fly by; while very noisy, it was cool to watch. I reached the new bridge crossing 2 minutes after the helicopter flew away for the last time. After the crew leader initially said the trail was closed, I pleaded my case of reaching the Green Mountain summit. A DNR rep with the work crew said it was OK for me to continue and wished me a nice hike. Phew!

I found it curious to see such a substantial bridge on a trail I'd imagine doesn't get much traffic. There's also been a lot of impressive trail drainage work done beyond the bridge. There's even an odd 200' long section of trail almost paved with stones near the end of the trail. Kudos to those who've done all that work. I wonder if there's intent to extend the trail beyond its current end.

Upon reaching Absolute Last Promontory and taking a short look down to the valley floor it was time for the real adventure to begin. First up, the talus field. I chose to continue on the trail until the talus came all the way down to it. Turned out to be a decent choice. The rocks are mostly rock solid (ha!), but I found a few wobblers that tried their best to trip me up. The path here is straight up with the talus field exit on the upper left side. There's a cairn or two, but not enough to really navigate by.

Based on prior trip reports, particularly Birb's from a couple days prior, I packed microspikes. Highly, highly recommend! I popped them on once off the rocks and kept them on until I was back down to the talus field hours later. The spikes worked fantastically on the way up with no real slips on the super slippery pine needles, they were particularly crucial when there were no vegetation belay options. The way back down was another story, but I'll get to that in a bit.

Navigating up was a relative breeze since the route follows the ridgeline up, up, up. There are a few rock sections to pick your way through or around. There's a decent amount of pink flagging that's useful for confirmation since the trail frequently fades.

After pushing to the summit, I enjoyed a long, sunny food break with a great view of the upper Middle Fork valley. After signing the summit register, which is tucked into the rocks just as the trail tops out, it was time to steel myself for the descent.

I'll share a Gaia link to my leisurely-paced hike. My route up is worth following. That's most definitely not the case for my route down. I got sucked into a couple of incorrect drainages since I wasn't checking Gaia frequently enough. Lesson learned! GPS is your friend on this route since sightlines are limited. I ended up in a couple tricky steep, brushy, rocky sidehilling situations fixing my mistakes and getting back to the trail. No idea where I'd have ended up if I'd continued down the wrong way, though I'd presumably eventually hit the CCC (perhaps well into darkness after hours of bushwhacking).

As a follow-up to Birb's 10/4 trip report I'll add that, even with microspikes, I had half a dozen uncontrolled pine needle glissades. Two of them were scary since I was accelerating until I ran into a tree or pile of branches. Thankfully there was minimal blood and nothing broken (other than a microspike rubber mount point), but this would be a bad trail to get hurt on while solo hiking since there's minimal traffic and challenging terrain even with all body parts intact. Maybe I need an ice axe next time to self-arrest. Would that be a pine needle axe? Of course, I kind of doubt there'll be a next time. I'd put this hike in the one-and-done column. I'm glad I experienced it and I enjoyed the challenge as well as the view from the top, but the risk/reward balance doesn't quite make sense for me.

Once back on official trail it was an easy cruise down to my vehicle. Fire smoke drifted into the valley over the course of the day and settled into the bottom 1,000', making me wish I'd brought an N95 mask along since the North Bend AQI was 200 and maybe even worse in the Middle Fork valley since smoke gets trapped back there.

tl;dr - Good hike for those looking for a challenge

Summit view looking up the Middle Fork valley with smoke starting to drift in.

What are these "mushrooms" doing growing 50' up at the top of a tree? (see comments below) 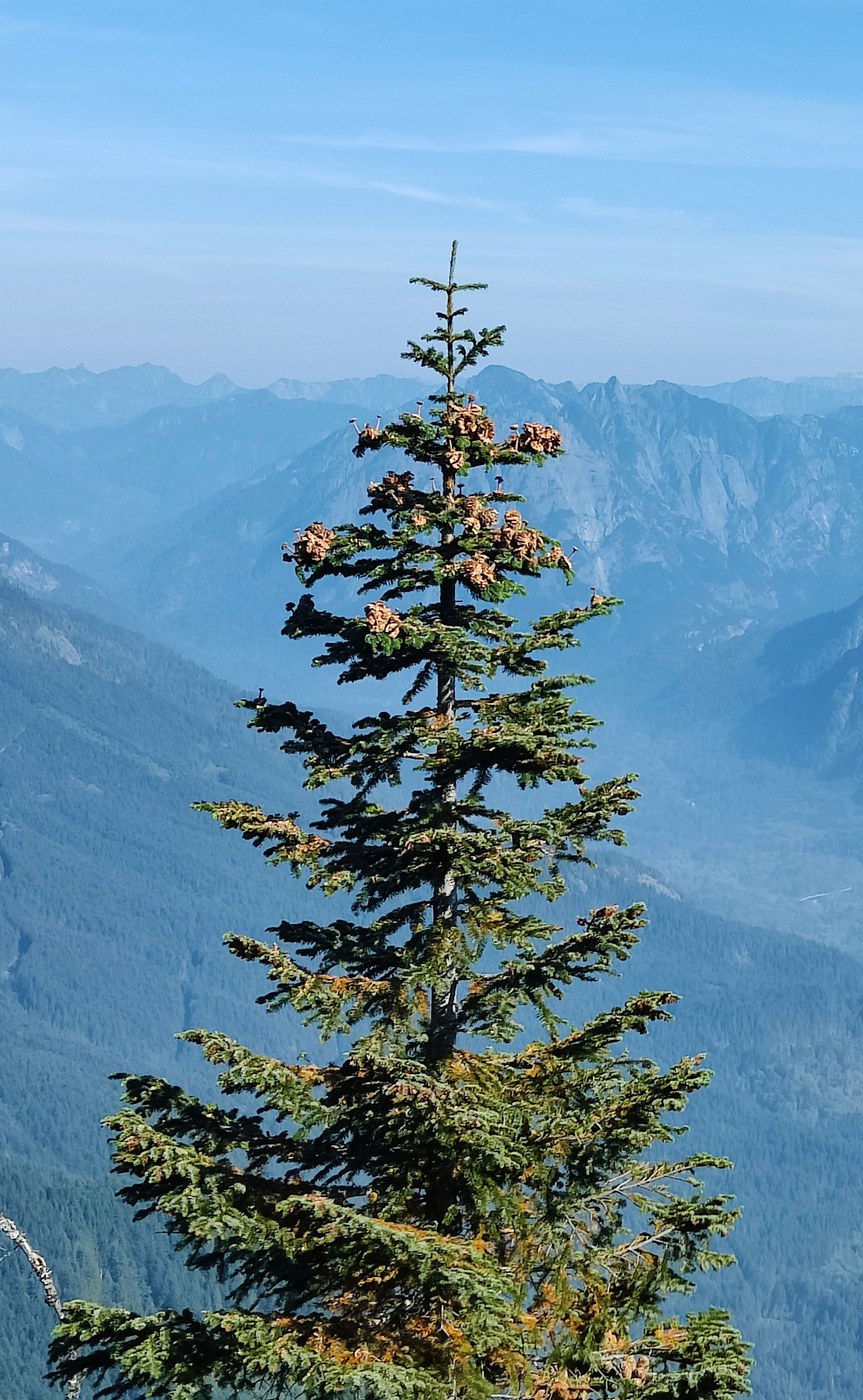 Hello fire smoke! Thankfully most of the hike was up in clean air. 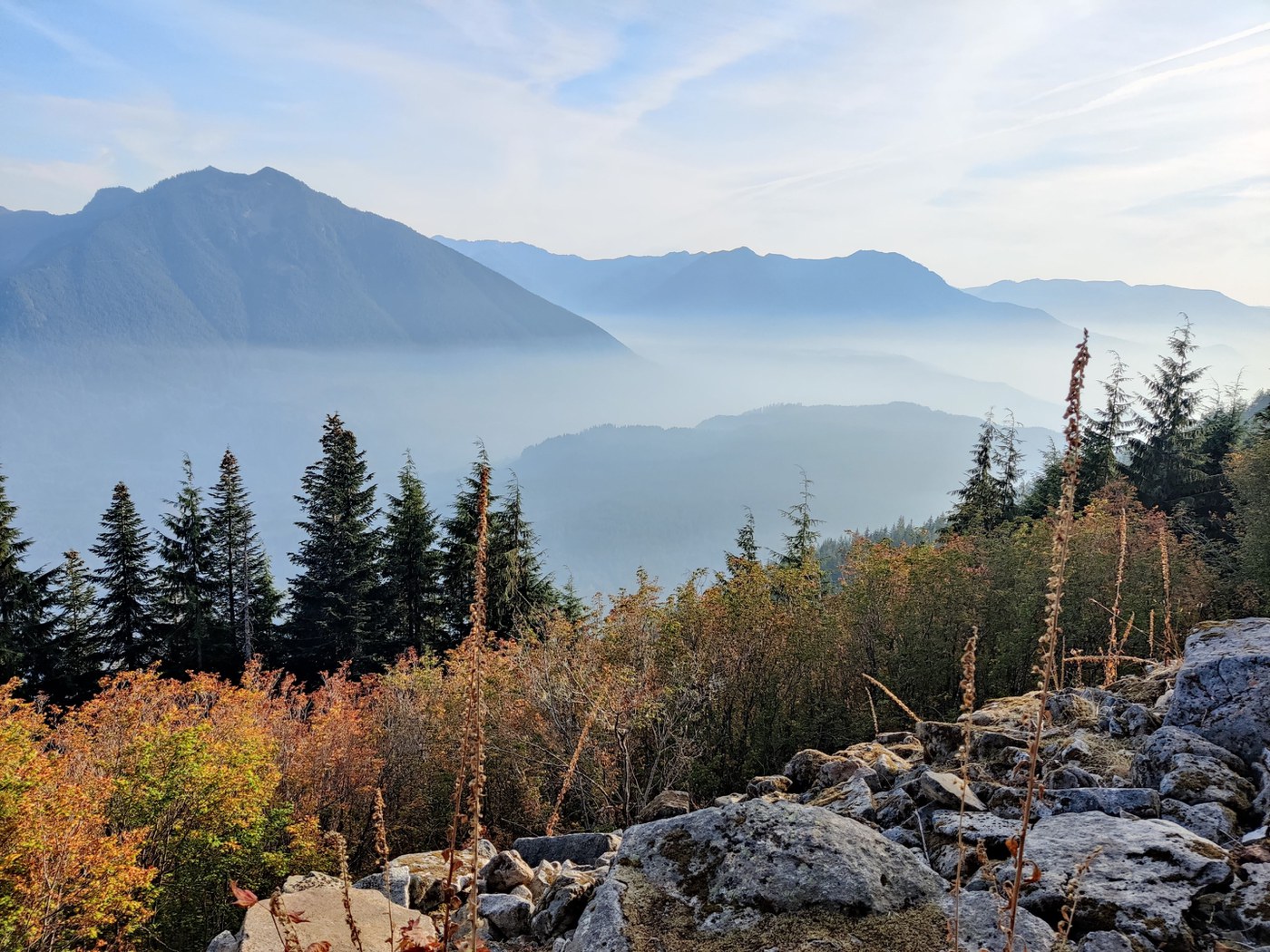 One and done is right. I think it's best done in winter when there is a decent snow pack and you can use actual crampons and ice axe. That's what I did. It took 2 tries, first time we ran out of daylight and there wasn't enough snow base and we only had microspikes.

I'm sure Brawling Creek really gets raging a few times a year, but that bridge looks like overkill for a seasonal creek. It almost looks long enough to span the middle fork, must be quite expensive. Considering it's not a very popular trail, I'm really curious to see DNR's future plans.

I'd like to know what those 'mushrooms' are? Could they even be fungi growing in direct sun after such a long, dry summer? Possibly spent mountain hemlock pollen cones?

>Could they even be fungi growing in direct sun after such a long, dry summer?
Should have said mushroom, not fungi.
Wish I could edit comments.

Is that trail the pet project of somebody with extra budget money burning a hole in their pocket? Since I didn't include anything to provide scale, I'll add that the girders are about 4' deep. They planning to run logging trucks over that thing? It seems enormously overdesigned. I wonder if they could have used the 20+ trees they cut down to allow helicopter access to build a sufficient crossing a bit upstream at a narrower crossing.

I recall seeing that tree in early summer, no mushrooms then of course. But can confirm those are pollen cones.

I've done that trail in snowmelt season a few times and never had troubles crossing brawling creek (with waterproof boots of course.) It's probably just the minimum sturdy anchor points or something since the agencies want to expand the trail system there and be another attraction in lower mid fork (iirc involving decommissioning sitka spruce trail and adding a second extension down and eastward to the CCC from Absolute Last Promontory.)

I wasn't going to comment because the creek names are not official so it's not worth getting picky. But I went to check out the new bridges on October 17. The new bridge is over what some locals call Wise Creek which has multiple feeder branches, but there is a main one that blew out in 2006 and again in 2009. It has been an open rocky wash since then. This Google maps link is the GPS I got when I visited. https://goo.gl/maps/KL2Kw8H93A71ri7t6

AFAIK, Brawling Creek is here. It's the one that intersects the upper part of the road to Absolute Last Promontory. https://goo.gl/maps/pVxeEhCFPJAeccg76

You sound much more familiar with Green Mountain than I am. I'm not sure who you're discussing creek names with, but the bridge in my pics crosses Brawling Creek, at least according to Gaia (https://bit.ly/3UoRHNS) and AllTrails (https://bit.ly/3t3W3y8). They could certainly both be wrong, but at least fellow users of the apps will be able to understand where I'm talking about. :-)

I think there are multiple new bridges going in up and down the Middle Fork Valley. Yay! Glad to hear there are plans to extend the trail beyond Absolute Last Promontory. It sure looked like that'd make sense.

Thanks for making me take another look. We agree on the creek names, but I was wrong in that there are now bridges on Brawling Creek, Wise Creek and Big Blowout Creek. The latter two are the ones I visited and I assume they were the only ones put in. Looking at your photo again I realize that the one at Wise Creek doesn't look anything like the one at Brawling Creek. I can celebrate with you that these trails are seeing some maintenance and improvements.

Those mushroom like growths must be fir cones that have been partially eaten by squirrels. Fir cones grow upright on the branches and do not fall to the ground. It seems impossible that a mushroom would grow out on the end of a live branch at the end of a bone dry summer.

100% agreed that it would be a completely illogical environment for mushrooms; way too dry and hot for a mushroom. That said, I couldn't figure out what else it could be and they really looked like mushrooms.

wabi sabi's guess of spent hemlock cones seems like a reasonable one. Somebody with a better camera needs to go up and zoom/enhance on the top of that tree! The tree is obvious when sitting at the most logical summit lunch spot.

This tree is definitely a true fir. Not a hemlock or a Douglas fir. True firs include alpine, grand, silver, and noble firs. The cones on true firs grow upright from the branches and do not fall off unless chewed off by a squirrel. Squirrels usually chew the cones off the branch and knock them to the ground and then do their cone eating at ground level. In this case it looks like they left the cones on the branch and just ate the seed bracts leaving the central cone stem intact.

I also learned that the eastern crossing of an unnamed creek where the CCC trail leaves the Bessemer road again will be addressed maybe next year. That is the creek that experienced a massive mud flow in February, 2020 that wiped out the road crossings and the CCC trail. This may be the kind of event that the large bridge on Brawling Creek is designed to survive.