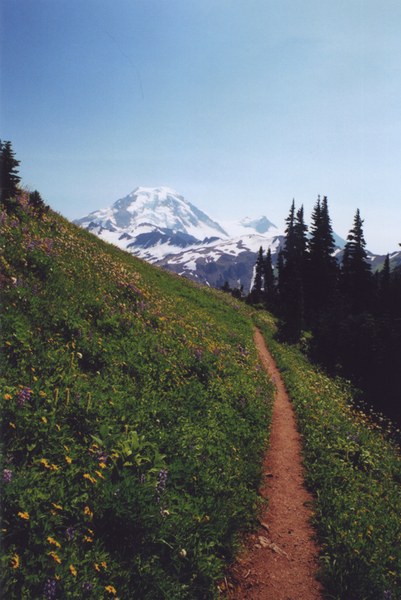 these trails in our Hiking Guide
Yes, I was the chowder head headed to Chowder Ridge with a full pack in the furnace-like heat on Saturday afternoon. Having camped Friday night at Yellow Aster Butte, it took some time to hike down to my car, find Glacier Peak Road (#39) and the quick left turn onto the twelve mile uphill road (#37) to the crowded Skyline Trail parking lot. My biggest fear had been finding the last safe parking space, but the 1 pm heat slapped me into worrying about something else. Fortunately, almost all of the couple of hundred day-hikers, and five or six groups of backpackers were ahead of me, so only a few people had to wait for the dotted lines to pass by my slowly moving butt. Within minutes, I found a shocking flaw in the special theory of relativity: at high temperatures, time doesn’t speed up when you slow down, it crawls to a stop. Moreover, observers from every perspective confirm that it took me almost forever to get to the ridge. After that, the views almost made me forget about time: meadowlands filled with lupine and valerian, Baker, Shuksan, Nooksack Ridge, and the Skagit Range. People were almost as plentiful as flowers, and mosquitos outnumbered them all, but the scenery drew me on to a tent site just before the unmarked split, where the trail to Chowder Basin skirts left, and the less obvious path up Skyline Ridge towards Chowder Ridge climbs steeply up. After setting up my tent, downing tons of water, and collecting liters of snow, I thought I might be prepared for a late afternoon meander to the Skyline Trail’s end at Chowder Ridge. The first half mile was marked by bursts of downward day-hikers. After that it was the occasional whoosh of heat-dazed grouse, rock and tundra, one tent at the base of the step up to Chowder Ridge, and expansive views to Baker and the ridgelines West. Even at six and seven, I cursed the sun for patrolling overtime. At every snow bank, I coated my arms, legs, head and neck with snow. Eventually, the heat receded like the tide, and hints of breezes felt as though they were treasures uncovered at the beach. Back at my tent, I counted seven camps spread along the ridge, and thousands of mosquitos searching for an angry fix. DEET and daiquiris came to the rescue. At sunset, a local family arrived to take thirty minutes of photos, and one remarked “You can’t buy a view like that.” It seemed uninspired, but as they traipsed out with headlamps in the dark, I realized he was dead on right, and I mentioned as much to the full moon as it rose over Shuksan. Sunday morning was muggy with sprinkles. I fed the mosquitos as I fed myself, and then trekked down to see what was happening in the world below.
Chowder Ridge 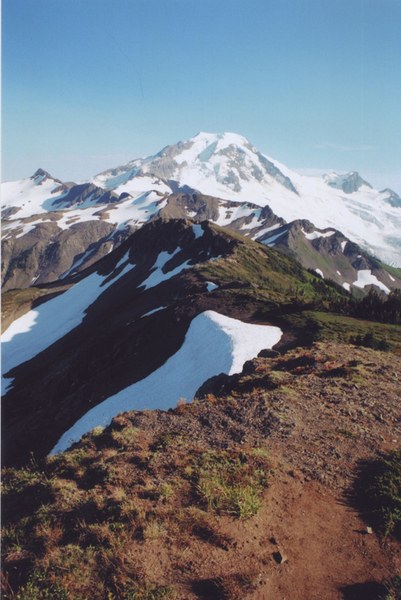