Skip to content
How to Hike the Olympic Peninsula by Bus If you don't have a car, it can be a challenge to go hiking farther afield Washington state. Connect to these six trailheads on the Olympic Peninsula by bus or bike. Included is a sample itinerary and some general transit tips, too! https://www.wta.org/go-outside/trail-smarts/transit-and-trailheads-getting-around-the-olympic-peninsula https://www.wta.org/go-outside/trail-smarts/transit-and-trailheads-getting-around-the-olympic-peninsula/@@download/image/becad1a1-f758-47f8-8925-13648b1638d6.jpg

How to Hike the Olympic Peninsula by Bus

If you don't have a car, it can be a challenge to go hiking farther afield Washington state. Connect to these six trailheads on the Olympic Peninsula by bus or bike. Included is a sample itinerary and some general transit tips, too!

The snow-capped mountains of the Olympic Range and the mysterious, mossy rainforests near the coast are enough to make the Olympic Peninsula a tempting getaway. But for those who don’t live on the peninsula and don’t own a car, a mini-vacation can seem impossible.

Luckily, the Olympic Peninsula has a great bus system, and getting around is cheap and easy. We’ve found a few trailheads that are a short walk away from bus stops in two “basecamp cities”: Sequim and Forks. 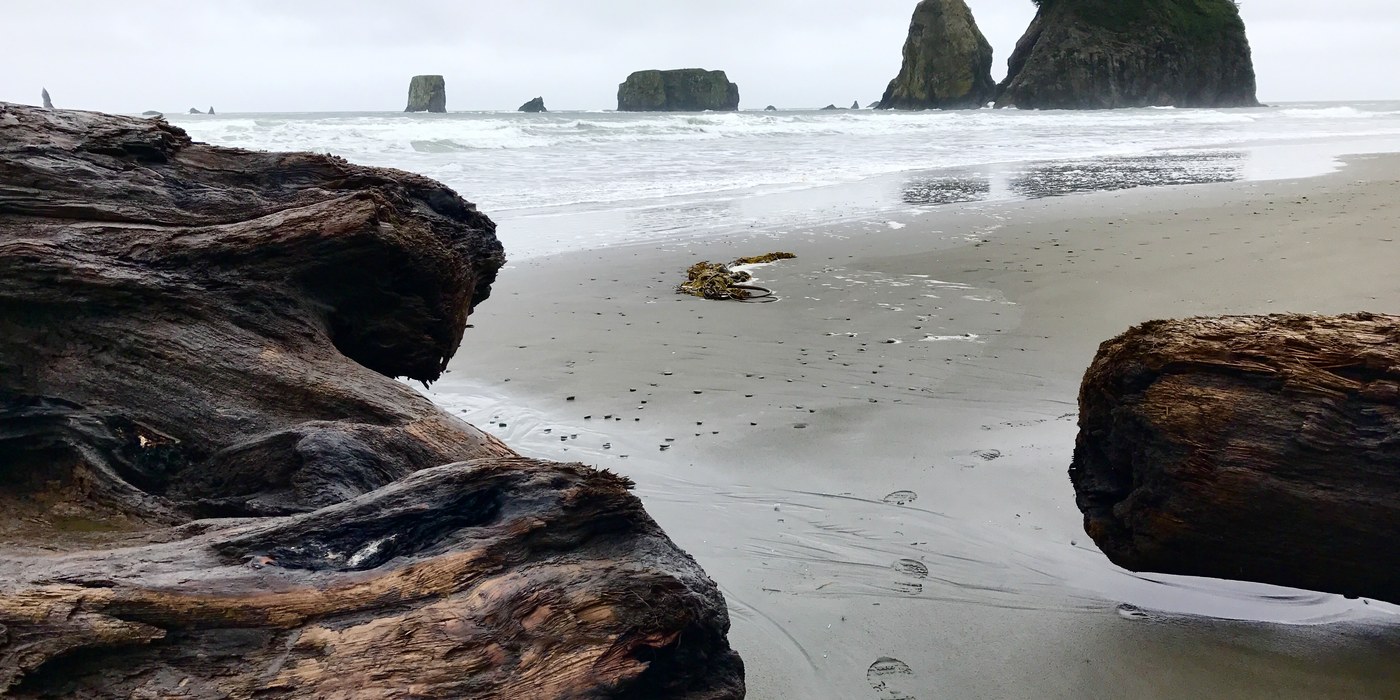 Get to Second beach by bus out of Forks. Photo by Kimlaree

Getting to Basecamp Cities: Sequim and Forks

The routes below each have a total cost of $3 or less—the pricey part of the journey is getting to the peninsula from your city. If you can get yourself to Seattle, two options for getting to the Olympic Peninsula are taking a Greyhound or the Dungeness Line.

You can find adventure only one bus ride away! Photo by Erik Haugen-Goodman.

Once you arrive at your “basecamp city,” find an Airbnb, hotel or bed and breakfast within walking distance from the city transit centers, and begin your low-cost, journey-by-bus to trails nearby.

Sequim is a unique part of the peninsula. It’s within an area that is generally thought of as wet and rainy, yet Sequim gets almost as much sunshine as Los Angeles, thanks to the rainshadow of the Olympic Mountains.

Learn more about this trail here.

Here are two suggested routes for getting there:

From the Sequim Transit Center, get on the 52 Line for Sequim Bay. Two stops later, get off at Sequim Bay Road and Rhodefer Road, and walk 0.2 miles for access to the Olympic Discovery Trail at the intersection of E Washington Street and N Rhodefer Road. From here, it is a 3.5-mile hike to Sequim Bay State Park. (Bus time: 7 min)

From the Sequim Transit Center, board the 52 Line for Sequim Bay. Four stops later, get off at Sequim Bay and Hwy 101, and walk the Olympic Discovery Trail for 0.5 mile to Sequim Bay State Park. (Bus time: 10 min)

Learn more about this trail

Downtown Port Angeles is a lovely ocean-front area with plenty of shops and restaurants, and even a marine center. Why not hike your way there? 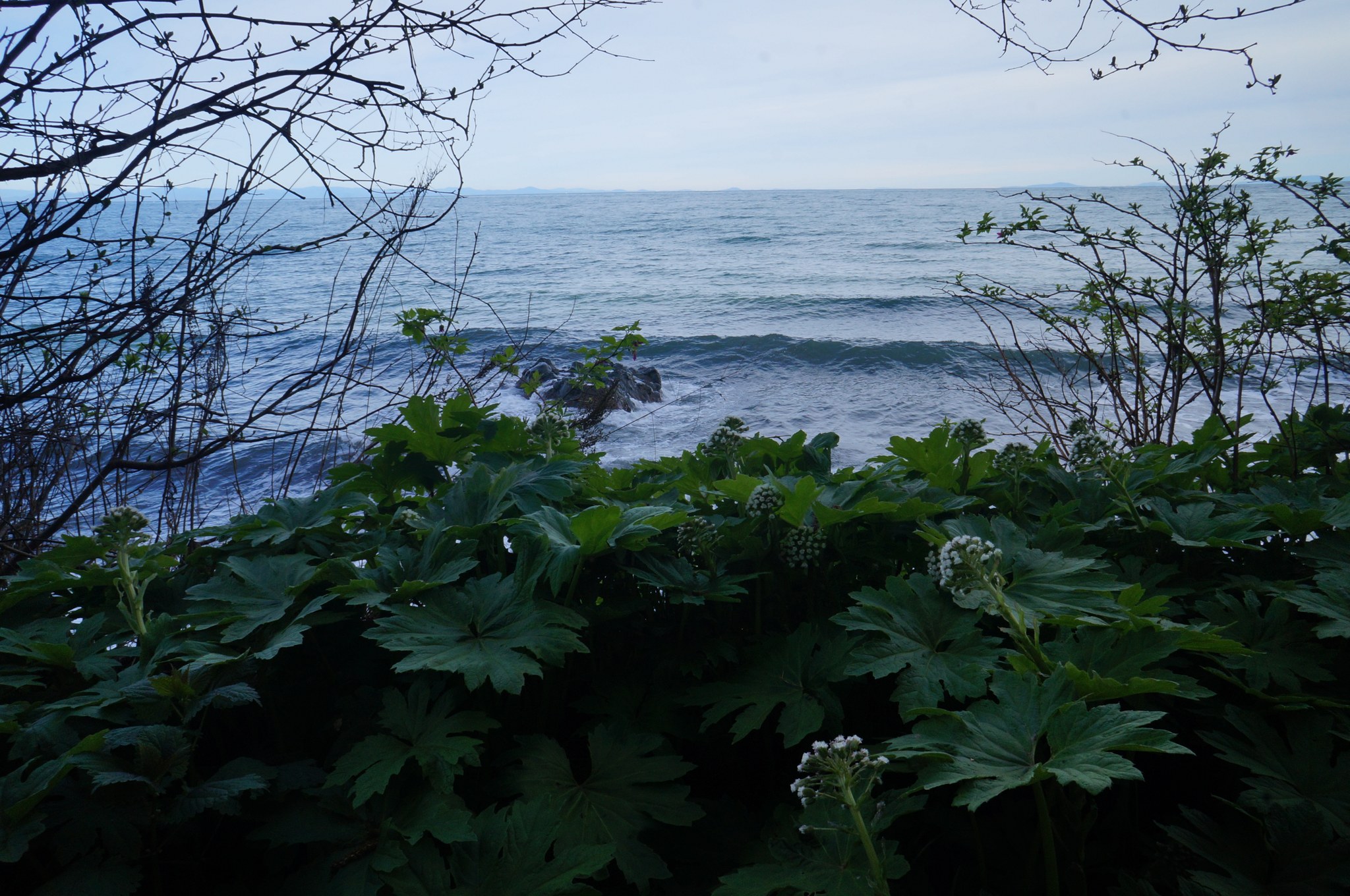 From Sequim Transit Center, hop on the 30 Line for Port Angeles. Twenty stops later, get off at Highway 101 and Deer Park (Park and Ride). Walk 0.6 miles on the paved trail right outside the bus stop to the Olympic Discovery Trailhead, and from there, follow the trail for 4.6 miles along the beach to the city pier. Bus time: 20 minutes

Return to Sequim Transit Center by taking the 30 Line for Sequim from the Port Angeles Gateway Transit Center, which is 0.2 mile from the city pier. Roundtrip cost: $3

Learn more about this trail

Walk on the 1,200-mile trail that extends from Montana to Washington.

From Sequim Transit Center, board the 8 Line for Port Townsend, until the Four Corners Park and Ride (on the corner of Highway 20 and Four Corners Road), 14 stops later. Walk .04 mile west along S Discovery Road, taking a right at Milo Curry Road. Bus time: 40 min

Forks is quite the opposite of Sequim in terms of weather. In fact, 58 percent of the year, Forks is a rainy, rainy town--which is what makes it surrounded in green temperate rainforest. Luckily, the dry season is in the summer! The Transit Center in Forks is on the corner of East E Street and South Forks Ave.

Coast via From Transit Center Forks

To Second Beach via the Olympic Discovery Trail

To Second Beach: From Transit Center Forks, take the 15 line for La Push. After 12 stops, get off at La Push Road at the RV Park and Store. You will immediately see the Olympic Discovery Trail. Follow this trail 0.5 mile south until you intersect with the Second Beach Trail, which leads you down to the coast. Bus time: 25 min

To Third Beach via the Pacific Northwest Trail

To Third Beach via the Pacific Northwest Trail: From Transit Center Forks, get onto the 15 Line for La Push. Eight stops later, get off at Highway 110 at Third Beach, and walk 0.2 miles east to the trailhead. Bus time: 25 min

To return to Transit Center Forks, go back to the La Push Road at RV Park and Store stop or the Hwy 110 at Third Beach stop and board the 15 Line for Forks.  Roundtrip cost: $2

To Olympic Discovery Trail at the Camp Creek Trailhead

Right off of Highway 101, this section of the Olympic Discovery Trail takes you through the forest and along Kugel Creek.

From Transit Center Forks, hop onto the 14 Line for Port Angeles, and get off at Highway 101 and W Snider Road after 12 stops. Then, walk 0.8 miles south to the trailhead. Bus time: 32 min

To return to Transit Center Forks, go back to the stop at Highway 101 and W Snider Road and get on the 14 Line for Forks. Roundtrip cost: $3. 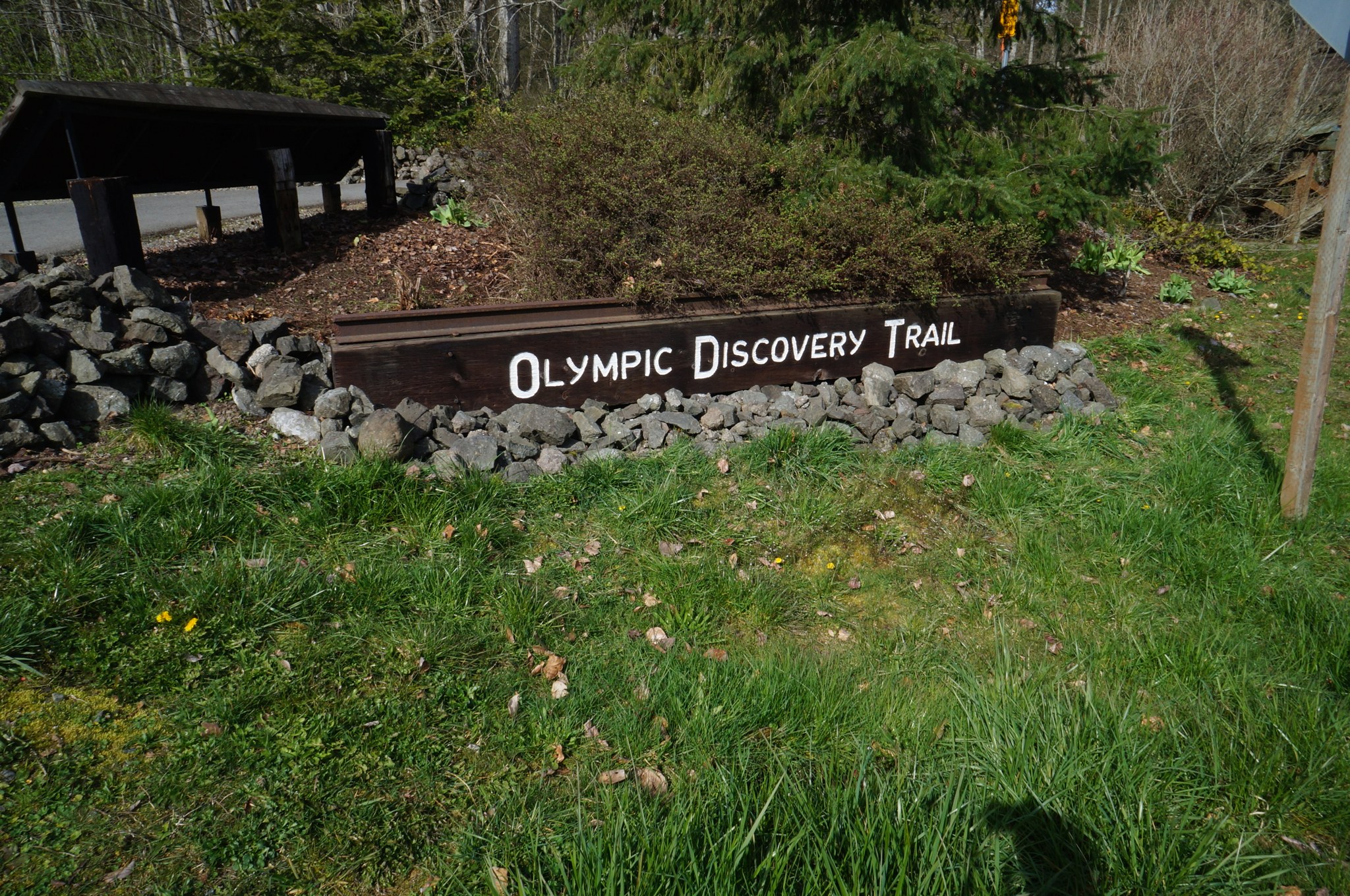 Kalaloch is another way to get face-to-face with the impressive waves of the Pacific Ocean.

From Transit Center Forks, get on the Olympic Connection for Hoh Tribal Center/Amanda Park. After four stops, get off at Kalaloch. Here, you will see the ocean and can walk right down to the beach, where you can chase the waves for miles. Bus time: 56 min

To return to Transit Center Forks, go back to the Kalaloch bus stop and hop onto the Olympic Connection for Hoh Tribal Center/Forks. Roundtrip cost: $1. 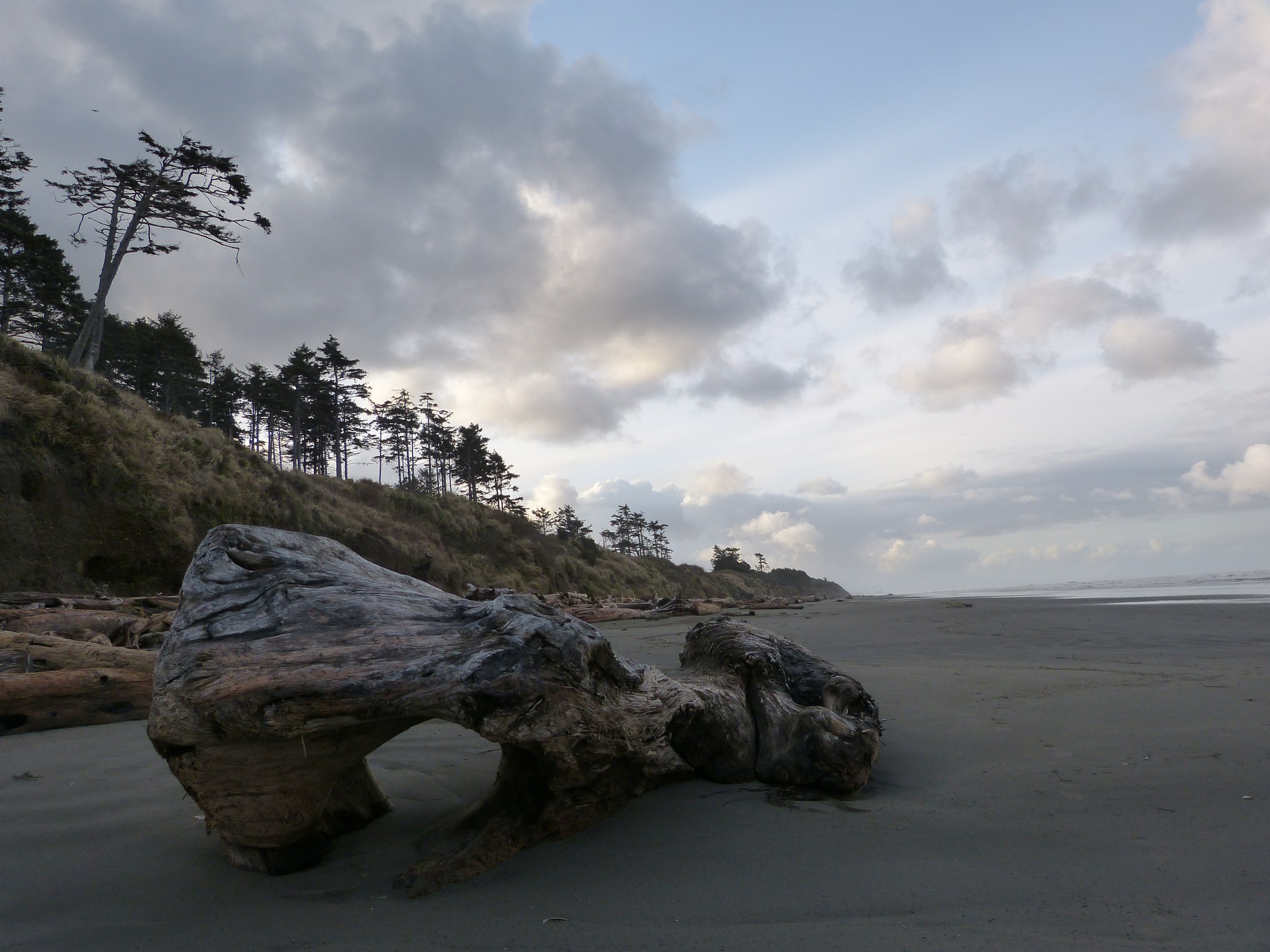 seattleo on How to Hike the Olympic Peninsula by Bus

One very important (and new) service was not mentioned. Clallam County Transit has started a one-bus service from the Bainbridge Island Ferry Terminal to Port Angeles with stops in Poulsbo, Jamestown, Discovery Bay, and Sequim. It only costs $10 in cash each way and accommodates 2-3 bicycles. Service is only twice-a-day, but it is easy to schedule a weekend trip from Friday evening to Sunday afternoon. More info: http://www.clallamtransit.com/Portals/17/Images/Schedule%20and%20Map/The%20Strait%20Shot.pdf