Skip to content
Meet the Trail Community: Geocacher What do you get when you take a geek to the woods? According to Tomoe Wilfong, (Geocaching username Kiborin) you end up with a geocacher. https://www.wta.org/news/signpost/meet-the-trail-community-geocacher https://www.wta.org/news/signpost/meet-the-trail-community-geocacher/@@download/image/Geocacher.jpg

What do you get when you take a geek to the woods? According to Tomoe Wilfong, (Geocaching username Kiborin) you end up with a geocacher. 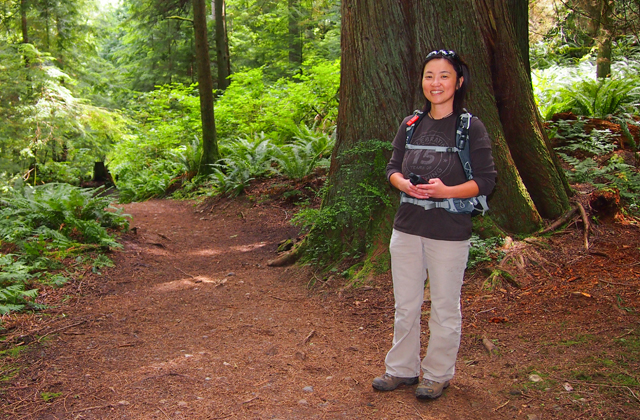 Tomoe grins at the start of a geocaching hunt. Photo by Kathy Bogaards.

Tomoe Wilfong (Geocaching username Kiborin) has spent much of her life playing in the woods. She fondly remembers letterboxing with her father when she was a child in Sapporo, Hokkaido, Japan, and she jokes about being on the orienteering team in high school. Letterboxing and orienteering met when she discovered Geocaching in 2012. It’s her newest outdoor obsession.

Tomoe first learned about Geocaching from the camp hosts at Larrabee State Park, in the summer of 2011.

"This was actually a life-changing event for me. They were veteran cachers, and they were talking passionately about geocaching. After they told me about their experiences, I read more about geocaching and the equipment they use."

Later that same summer, Tomoe was working at the state park when a group of hikers with more gadgets than usual caught her eye. She laughs as she remembers, "They were looking suspicious -- going under things and moving rocks around. I ran up to them and asked if they were geocaching and could I tag along?”

It was a fun adventure until her trusty flip phone gave out. But that didn’t stop her. Tomoe now had the excuse she needed to get a smartphone and download the Geocaching app. From there her hobby escalated quickly. Her first solo-cache (one found when caching alone) was quick and easy. 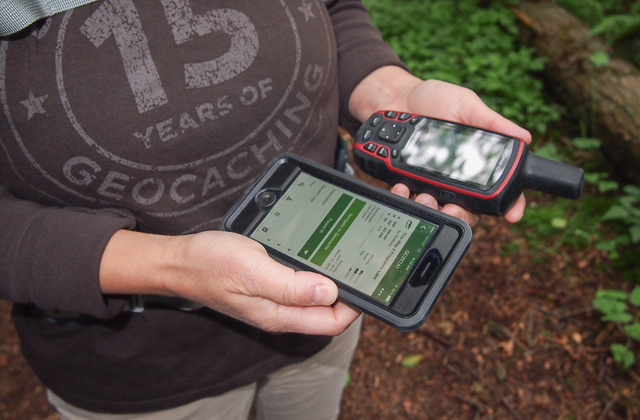 A smartphone and the Geocaching app help cachers meet their goals. Photo by Kathy Bogaards.

While waiting for her daughter at a bus station in Bellingham, Tomoe decided to get to know the app she'd just downloaded.

"My daughter was on a shuttle from Sea-Tac Airport, and I was waiting for her in Bellingham. She called from Mount Vernon to say the bus was late. That’s when I decided to check out the Geocaching app. Thank you, shuttle bus for not running on time!"

As she navigated the app, she was delighted to learn there was a cache just feet from where she was standing. From this first find, Tomoe has gone on to discover nearly 1,300 caches in four years.

Outfitting for a new hobby

Clearly, the hobby was addictive. Geocaching requires specialized gear, but the glint in Tomoe’s eye as she lays out the tools of the geocaching trade shows she doesn’t mind carrying a little extra weight. “I have always liked hiking but now I am finding hidden treasure -- using a satellite to find Tupperware in the woods. It does take a little more preparation than before, though.”

In addition to the ten essentials, Tomoe carries a small mirror, called a Telescoping Inspection Mirror (think of the one that dentists use to look behind your teeth) to help peek under benches and logs, an
ultraviolet light for nighttime adventures, and a magnet and claw sticks to retrieve caches in hard-to-
reach hiding spots, plus several extra batteries for her GPS and phone. 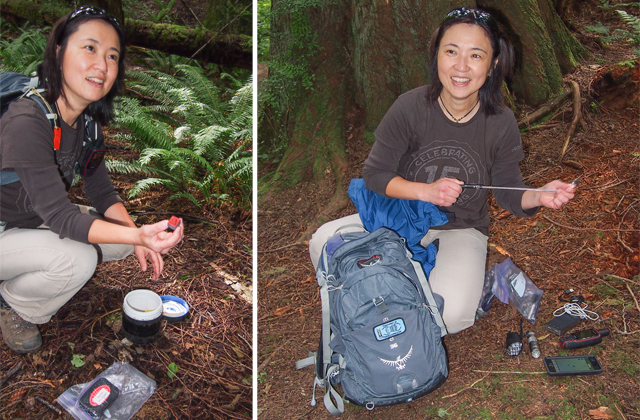 (l) - Tomoe shows what's in a letterbox hybrid cache she found, (r) - She packs up the gear that helped her find it. Photo by Kathy Bogaards.

Always something to discover

For Tomoe, Geocaching brings her closer to her surroundings.

Since beginning to look for caches, Tomoe scrutinizes the trail all along her hike, instead of simply powering toward her destination. It also sometimes helps her discover treasure lying just past that destination.

Closer to home, Tomoe has been known to pull her phone out in the middle of running errands or lunch
with friends -- just to see if there might be a cache nearby. There usually is, and she loves when she
convinces folks to come with her on the hunt.

“This is really something anyone can do. It is great to be able to keep hunting even when an injury keeps me out of the mountains.”

From trail to town, caches can be found everywhere, even on WTA work parties! Tomoe laughs as she
remembers her crew leader’s face when, during lunch one day, she told him she’d get back to work as
soon as she tracked down the cache that had just appeared on her phone.

Tomoe says she is grateful for WTA’s trail maintenance work.

“Smooth, clear trails are safer for cachers that sometime forget to look up from their phones.”

But WTA helps cachers and hikers like Tomoe with other resources, too.

“After I pick my next cache to locate, I go to WTA’s hiking guide and trip reports to see what intel is available.” 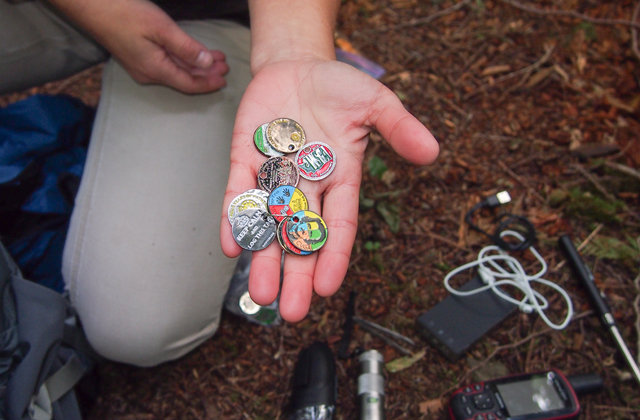 She particularly enjoys the caches that are further out if she gets a beautiful summit view.

“When it is really far out sometimes I am lucky enough to be the first to find the cache. That is always fun and gives you bragging rights.”

Tomoe’s next trail adventure is to place a cache of her own.

“It opens up a whole new side to the adventure. I am thinking about the best places and what permissions I need to get. I can’t wait to see what folks think about my hiding spots. I have some great ones in mind.”

Want to know more? Learn about the history and Leave No Trace ethics of geocaching in an article from a 2012 issue of Washington Trails magazine, updated with information from Tomoe.

If you'd like to try your hand at it, be sure to buy tickets to WTA@50, our birthday celebration in September. We'll be having a Geocaching Treasure Hunt and tutorials there, in addition to lots of other fun activities.

Geocaching is a great activity and introduction to many lovely places in the area. A major issue with geocaching is the destruction around a cache. A key reason why I gave up the sport was because I'd find so much trampled vegetation within the vicinity of a cache.

Like with Birdguy, I too mostly quit geocaching because of the abuse of our natural areas (intentional or unintentional) by cachers. Too often vegetation has been trampled or new trails formed to find or hide caches. Also, I have seen and come across too many caches in wilderness areas that are strictly forbidden. I even removed one because of all the damage created by cachers only to be chastised by the geocaching community for trying to protect the wilderness areas we all love. As can be seen below in the forum, there are many cachers that have no respect for public lands let alone wilderness solely for the fact they cannot do whatever they want on such lands.

Regardless of the problems with geocaching, I do think it is fun in urban and non-wilderness areas. I still occasionally do find caches and keep a "legacy" cache (been going for 12 years now) operational.

Good input about Leave No Trace ethics. Of course it's important to tread lightly when recreating outdoors, regardless of what activity you're pursuing.

For those who may not be as familiar with geocaching, we linked to a full explanation of the activity in the article, but here's the link in case you missed it! http://www.wta.org/hiking-info/basics/geocaching-an-on-trail-treasure-hunt