Skip to content
Profiles in Advocacy: Representative Andrew Barkis Representative Andrew Barkis spoke with WTA about growing up in the outdoors, passing legislation, his favorite Washington hike and the outdoor recreation economy. This is the first of our Profiles in Advocacy series, where we talk to trail champion decision makers at all levels of government and public service. https://www.wta.org/news/signpost/profiles-in-advocacy-representative-andrew-barkis https://www.wta.org/news/signpost/profiles-in-advocacy-representative-andrew-barkis/@@download/image/fdf41a1f-9e88-4f3a-9322-9178b89de59b.jpg

Representative Andrew Barkis spoke with WTA about growing up in the outdoors, passing legislation, his favorite Washington hike and the outdoor recreation economy. This is the first of our Profiles in Advocacy series, where we talk to trail champion decision makers at all levels of government and public service.

"Hello, this is Andrew."

That's how Representative Andrew Barkis answered my call to his office, a few days after being the keynote speaker at WTA's Hiker Rally Day a couple of weeks ago. Representing the state's 2nd District (which encompasses all of Mount Rainier National Park) since February 2016, he was raised in Chehalis and now lives in Olympia with his wife and two sons. When he's not on the Capitol campus, Rep. Barkis would prefer to be camping or hiking.

Rep. Barkis is a longtime champion of public lands and the outdoors. We recently chatted a little more about what stoked his love of the outdoors, outdoor legislation he's particularly proud of, the impact of the outdoor recreation economy and '80s mullets. 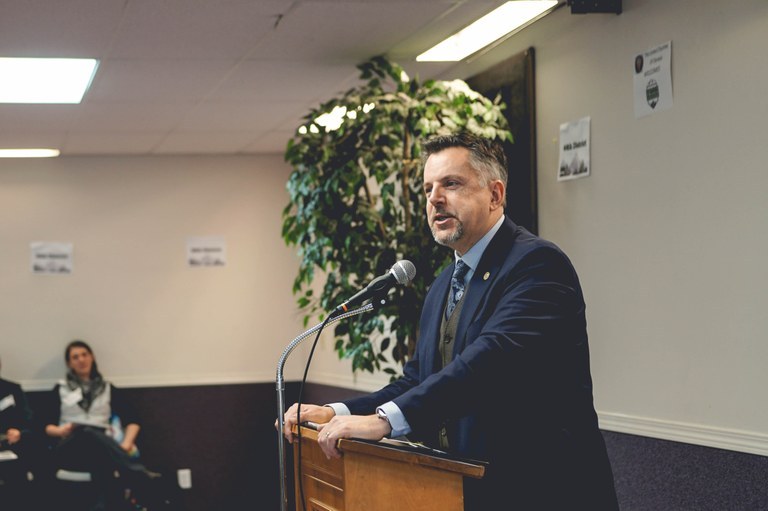 You grew up in Chehalis (Washington). Were you always an outdoors kid?

You know, I played a lot in the outdoors. We lived on “the hill” in Chehalis and explored every inch of that place, but it wasn’t until I got to about the sixth grade, and some of my friends were always talking about hiking and camping, and I found out they were involved in Boy Scouts. And so I ran home and told my mom I wanted to join the Scouts. To this day, I'm still involved in Boy Scouts.

It was through my experience with scouting that I did my first hike and beach hike and camping in the snow. For a time before I got involved in the legislature, I would take a calendar, and every single month, we camped out. We’d go everywhere. We still do a lot, but not as much as I’d like to. But planning to do more this summer.

do you have a favorite hike in Washington?

It’s tough but I would say anything on the Olympic Peninsula. I absolutely love everywhere from the Hoh Rainforest out to the beach. I’ve done that many times. Lake Ozette is just phenomenal. But my backyard is Mount Rainier, so one of my favorite hikes is High Rock. My goal is to do it during the meteor shower. Never been able to get up there on a clear night, and I thought it would be absolutely spectacular to spend all night up there. It’s a goal.

it’d have to be perfect weather

It does, yeah. The last couple times I’ve tried to get up there, there’s been snow blocking the road or something that’s prevented it. But that’s a really cool area, right outside the park. 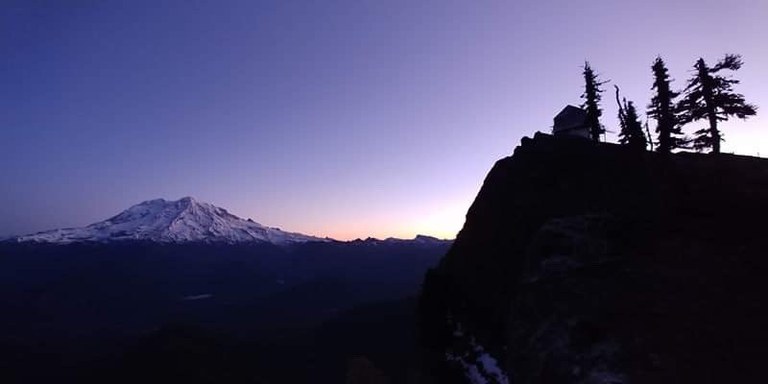 The view from High Rock is one of Rep. Barkis' favorites, though he's yet to catch a meteor shower up there. Photo by jennnnnaaaayyy.

Your district encompasses most of Mount Rainier National Park...

The whole park. Yeah, we literally go all the way around the whole park out to the Yakima County border on Cayuse and then it follows the Carbon River down to Orting. A lot of the park, a lot of the rural area. So yeah, it’s pretty cool when I’m there meeting with constituents and talking about issues very much involved in that area. A nice tie-in for me.

There’s been a lot just working on preservation. I can’t I.D. a specific piece because there’s been so many. But I think just helping to support financial resources, whether it’s through WWRC (Washington Wildlife and Recreation Coalition) or RCO (Washington State Recreation and Conservation Office) or trail preservation or new trails.

One of the pieces I’m really proud of that I did last year actually has to do with hunting and fishing. But it was really getting at some of the ADA requirements to help with licenses, to increase the opportunity for more people with disabilities. This year I have a piece that’s a companion to lower the fees and broaden the definition so literally it would double the amount of those with disabilities to gain access at a lower rate to outdoor activities. That one I’m pretty proud of.

You know, I think really just bringing a practical voice to balancing out. It’s always a balancing act up here of preservation and making sure we have proper resources. That’s why I’m chair of the Outdoor Recreation Caucus (at the legislature). And working with our parks. It’s important. We are really blessed in Washington state. We have an amazing park system and an amazing trail system.

I got involved when I first got out here with the Washington Tourism Alliance and really put a voice to the importance of outdoor recreation to our overall economy. That was a missing component that I think a lot of people didn’t realize. How much revenue comes into the state from hiking and biking and camping and getting outside.

Especially for your district. You represent a lot of trail towns, places where the economy is reliant on outdoor recreation.

Yeah I was explaining that to someone. They were like, "Well, how does that … " and I just said, here’s a typical weekend and gave them a rundown. We’ve (the Barkis family) moved more to "glamping" but you have to pay for the reservation, fuel … but that’s just our base camp. Then we go do our thing. We go to restaurants. We buy supplies. We buy gear. We buy all sorts of different things. It can be literally hundreds of dollars in a weekend, sometimes more if you’re a junkie like me, but you extrapolate that out to all the hundreds of people doing that and you start to realize the impact.

Thank you for making that connection.

The power of advocacy helps to bring that balance, and that’s what’s so great about the Outdoor Caucus. Bringing balance between (WTA) promoting trails and foot power. Then you’ve got the ORV guys that should have that access, the Back Country Horsemen, all these different — I wouldn’t even say competing interests — I’d say user groups. A lot of times, we have to balance something. I’m a fiscal conservative, so I’m looking at how we balance our dollars, and we have to still be able to have resources used that are part of our natural landscape like timber and so on.

When we’re balancing that and asking for dollars to do this, people say, "You’re spending so much money on this" and I say, "We’re getting it back. If we put this into this, it generates this." I think parks are a great example of that. State Parks have always been on the chopping block every time the budget turns, the economy turns. They were forced to have to be self-sufficient with the Discover Pass and everything else. They created a model, and said look, "We’re doing this. We have the premiere park system in the country, and we’re self sufficient, and we’re generating money to be able to do this." They were hedging against that future where they would see (budget) cuts.

One last question, a fun one: What's something that people might not know about you?

People know pretty much everything about me — I’m a public official. But I play music. I play drums. I used to play in a rock & roll band. I had a killer mullet in the '80s.

I think what surprises a lot of people is how much I love to get outside. They see me all suited up and professional and business. But I am happiest when I am wearing my favorite pair of hiking pants. I have an extensive beanie collection. It’s kind of my thing. When I get home, I’m out of my suit into my comfortable clothes, my REI fleece and my favorite beanie. And I’m happy. There’s nothing better than waking up on a beautiful morning and having a cup of coffee and building a fire. Whether I’m sitting up at a high alpine lake or in a park; to me — that’s happiness.

This interview was lightly edited for length.