Building brand new structures and trails is one of the most fulfilling kinds of trail work. From nothing, you construct a feature that will connect hikers to wild places for years to come. Following are some different kinds of trail structures you might create on trail with WTA. 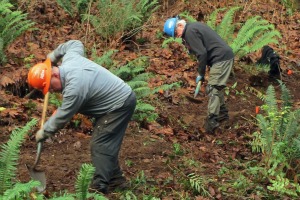 Pioneering a new trail is no doubt one of the most rewarding types of trail work. Foot by foot, you create with your own hands a corridor through the forest that will grant hikers access to previously unknown natural spaces.

Before volunteers arrive on the scene, land managers survey the area and map out where the trail will go so that when you get to a work party, the course is all ready for you to dig in. In the picture to the right, volunteers break ground on a new section of trail.

To Build a New Trail 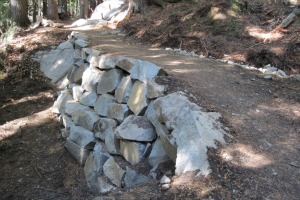 Retaining walls can be built out of both wood and rock. Wood retaining walls (called crib walls) are easier to build, but rock walls are sturdier and are often the best option.

To Build a Rockwall 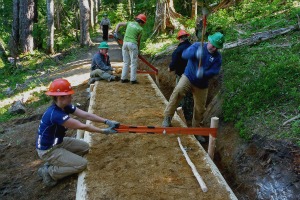 If you've hiked much in the Northwest, you've probably encountered a mud-hole or two. In boggy areas where water absolutely can’t be diverted by a simple drain dip, turnpikes are sometimes necessary. A turnpike is an elevated walkway constructed of two parallel logs or rock walls filled in with rock and mineral soil as seen on the right.

To Build a Turnpike 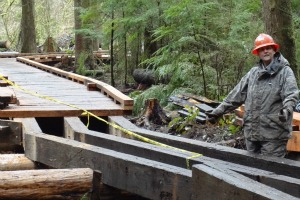 When a trail crosses a river or boggy area, there is no way around it but to build a bridge. Luckily, building a structure as tangible as a bridge is also extremely satisfying. Some examples of WTA-built bridges can be seen on the right.

Especially in the backcountry, bridges are often made of native timber from trees surrounding the construction site. There are a number of different kinds of bridges that are built for varying purposes.

Parts of a Bridge 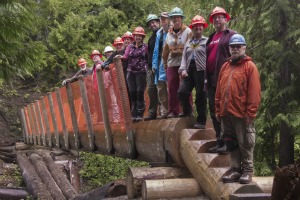