Spanning three states and 2,650 meandering miles, the Pacific Crest Trail (PCT) might come off as a little unwieldy. But once you get to know it like WTA volunteers have this year, maintaining the Washington section of the trail begins to seem more manageable. 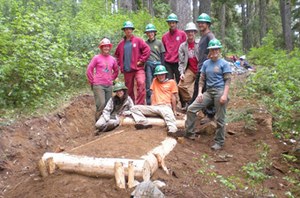 High school students working together as part of a WTA Youth Vacation pose next to their completed turnpike on the PCT north of Deception Pass. Photo by Steve Hertzfeld.

This summer WTA work crews put in 5,524 hours on the PCT, from the Cle Elum district in central Washington to the Methow Valley area on the Canadian border. Because much of the trail lies in the heights of the Cascades and is covered in snow for most of the year, WTA only had a narrow window from July to September in which to work. But volunteers made the most of those weeks by coming out in full force this summer.

The PCT is different from other trails in that much of it is in the backcountry, not easily accessible by vehicle. This makes it the perfect trail for Volunteer Vacations — of which there were eight on the PCT this year — and Backcountry Response Teams — of which there was one. The Pacific Crest Trail was also the location of four Youth Vacations, and the teenagers on these week-long work parties put in work equivalent to what the adults were doing.

The Pacific Crest Trail Association (PCTA) is the nonprofit that manages the entire length of the PCT, but they also work with local districts and organizations like WTA to maintain the trail. WTA has been officially contracting with PCTA since 2005 but have worked on the PCT long before that. In total, WTA volunteers have worked more than 65,000 hours on the PCT since the mid-1990s. 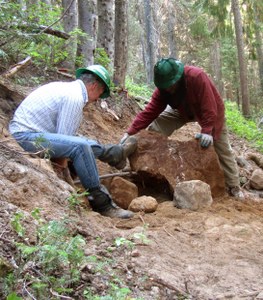 Two volunteers on the Deep Lake Volunteer Vacation remove a large rock from the middle of the PCT. Photo by Benjamin Pontecorvo.

This year day-trip volunteers focused their efforts in the Cle Elum District, brushing the section of trail north of Snoqualmie and cutting back logs and snow, as well as re-treading the trail in the Cold Creek/Twin Lakes area. Volunteer Vacation crews were able to get a bit further in. With Cathedral Rock towering above them, a team spent six days at Deep Lake repairing culverts, removing rocks and re-working the tread on the switchbacks leading up the mountain.

Youth came out enthusiastically to help brush and re-tread the PCT in the Wenatchee River District, first at Indian Creek and then at Buck Creek. The northernmost portion of the PCT, in the Methow Valley District, also received significant attention. Near the Canadian border, a Volunteer Vacation logged out about 26 miles of the trail. Then, from Harts Pass to Rainy Pass Backcountry Response volunteers cut back over 100 logs.

Day crews also worked on the PCT as it runs south from Stevens Pass in the Skykomish District, repairing tread, building a rock wall and preparing for the winter by improving drainage. A Youth Vacation to Cliff Tree Basin/Marmot Lake, also in Skykomish, created a turnpike and a stream crossing and cleared avalanche debris from the trail.

As the summer draws to a close, WTA volunteers can look back on their hard work and know that, thanks to them, the Washington section of the PCT is in good shape for thru-hikers and day-hikers alike. Because of them, the PCT will be able to withstand the winter until volunteers return to tread it again next summer.