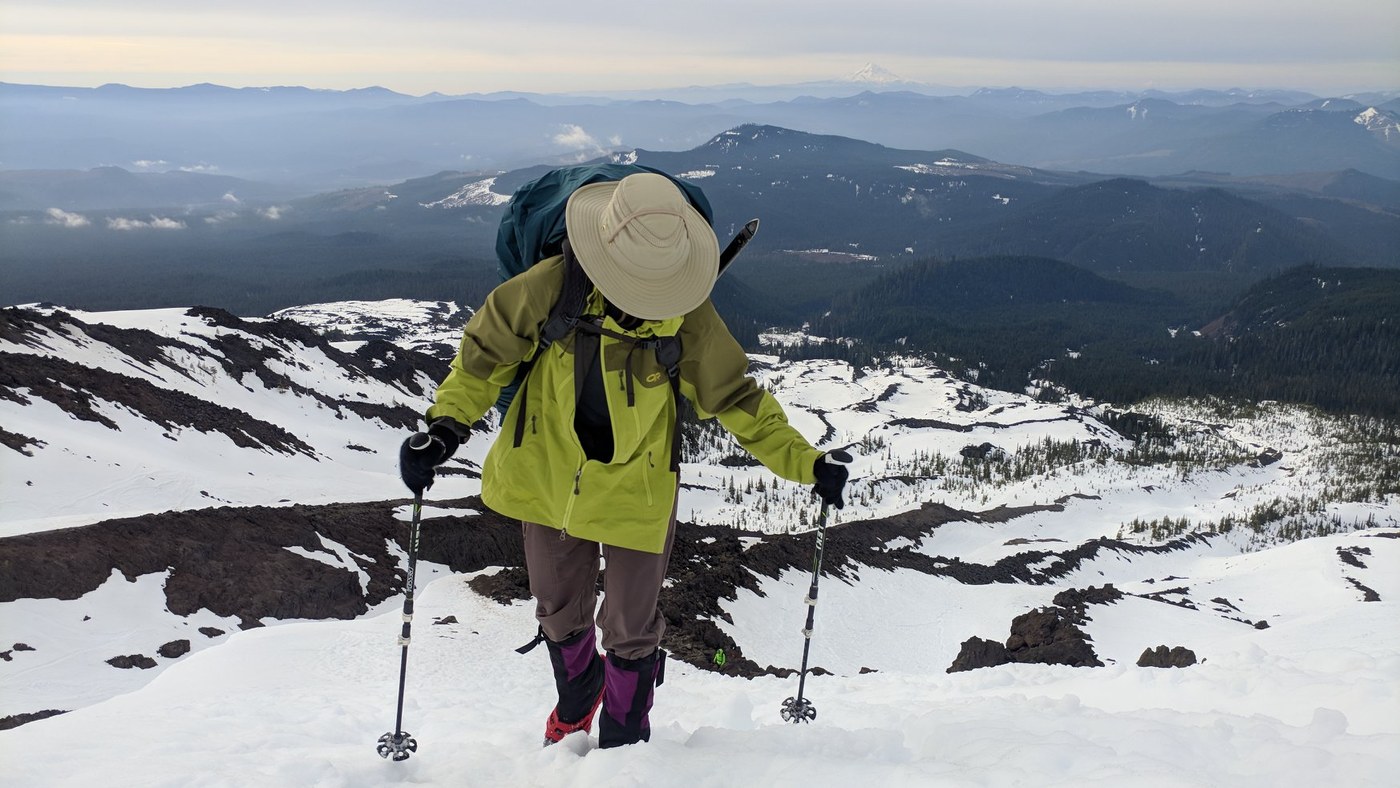 Earth Day 'mother & son' hike on Monday April 22 to the summit and back via the Worm Flow route. I did not bring any Girl Scout youth members on this (nor would I). Just the two of us Scouts; me, Lifetime Gold Girl Scout and son, Eagle Scout. Yup we were prepared.

We arrived Easter evening to a half filled parking lot at Marble Mountain Sno Park, lots of happy faces of hikers/climber/skiers that were drying out in the afternoon sunshine. The lot was no longer in need of being plowed; and the snow on the perimeter dirt was melting fast. We checked out the closed 'warming hut', we heard it had been open earlier. Looked inviting. Parking lot amenities included a two seat outhouse and overflowing garbage can. (Why can't folks take their garbage home with them?). Also, byo tp at the end of a busy weekend. We chatted with several hiking groups to get the data on conditions, which spikey foot attire to use, and such. I was surprised at the number of skiers.

We headed up the trail to find a slope for my snow travel and ice axe use refresher (it had been a few decades). Ater an hour of throwing myself in the snow in all sorts of positions he claimed I was 'good to go'. We camped overnight in the lot with only one other vehicle! In the middle of the night one other vehicle arrived.

We were on the  trail at 0550, a little later than planned. Clear skies, beautiful sunrise, excitement in our hearts! Nervousness in my mind. I'm not a mountaineer, except for climbing this one in college in the mid 70's when it was a whole mountain. We put on our microspikes about 1/2 mile in; the snow had frozen overnight, but had been very slushy Sun. evening. Easy going to Chocolate Falls (not even a drip was falling) where we sunscreened up, removed a layer, and hit the climbers route trail along Swift Creek.

It was steep, I knew it would be, and I don't do steep very calmly. But with my son at my back, I took it one step at a time. I stopped looking down at about the 6,000' mark and just focussed on making every step count. Snow was crunchy, not too mushy, not too frozen...perfect for feeling like I had a grip on the slope. Soon it was time to don the helmet, stash one of my trekking poles, and get the ice axe out--serious business ahead. Here the weather started changing, a bit earlier than forecasted. With our gps track in hand we continued on steadily and slowly 'at ma's pace'....and then magic words...we are 300' below the summit. WooHoo. And then 'ma stop...we're here'. Over the moon exhilaration!! However, with strong winds, and very, very low visibility our celebration was short lived; we'll save it for the campsite. We headed down eager to retreat from wind, sleet, and clouds.

A quick snack stop to now put on rain pants, stash our spikes, and begin glissading when safe to do, that sure was the way to descend, getting us down in almost half the time of our ascent. There are multiple chutes, choose wisely! WOW---the views are amazing, even tho the cloud deck is at about 6,000'. Glad I peeked at a few views earlier....by the time we reached the treeline the snow was mushy enough we didn't need our microspikes for the final ~2.5 miles to the trailhead. Celebration time!! Joy, pride, and peace. I'm thinking I'll return---gotta get the promised view; but better not wait 42 years again...

Stats: Up: 7 hr 40 mins (ma's pace). Down: 4 hr 10 min. Other hikers: Three signed in ahead of us, six after us. We only saw one hiker and one skier above Choc. Falls. As far we could tell maybe the one skier dude summited, all  others turned back. 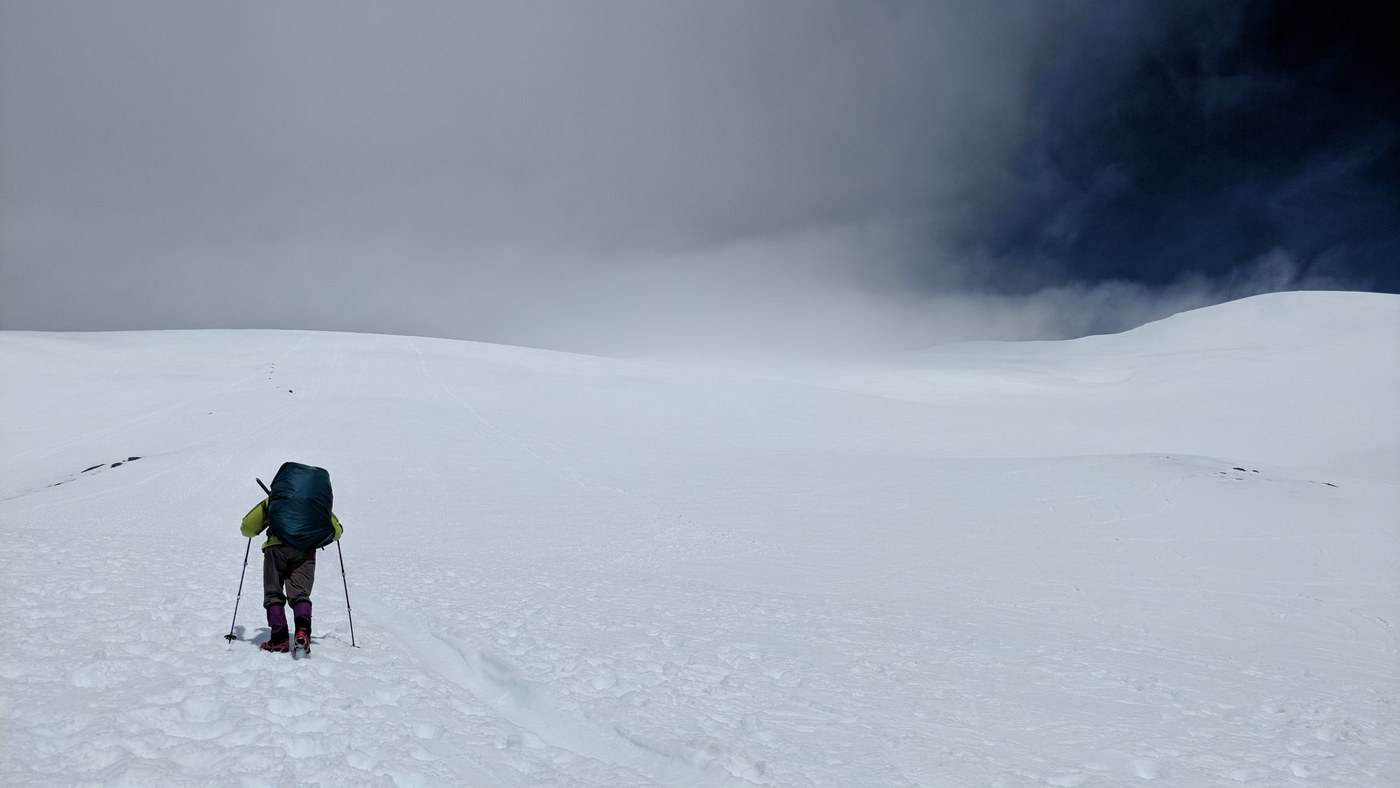 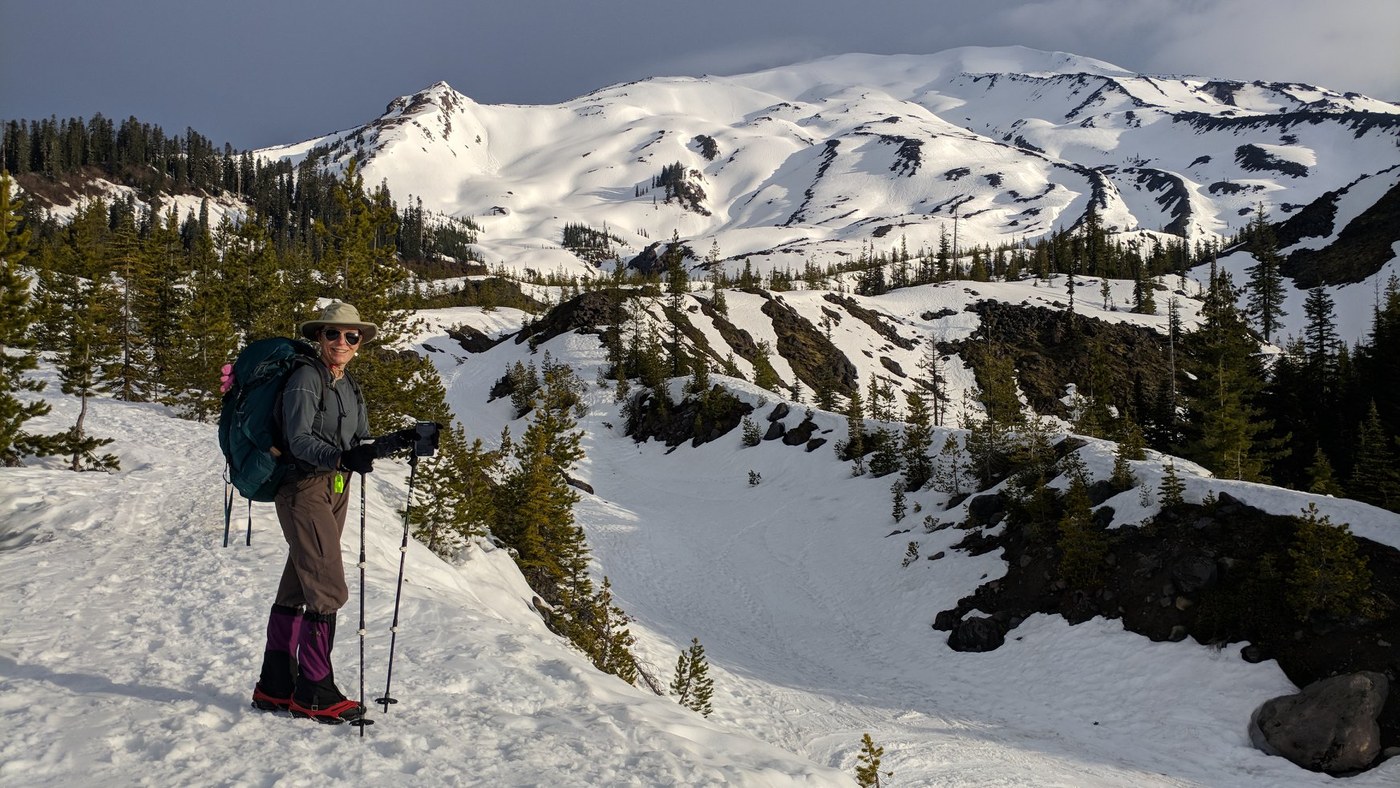 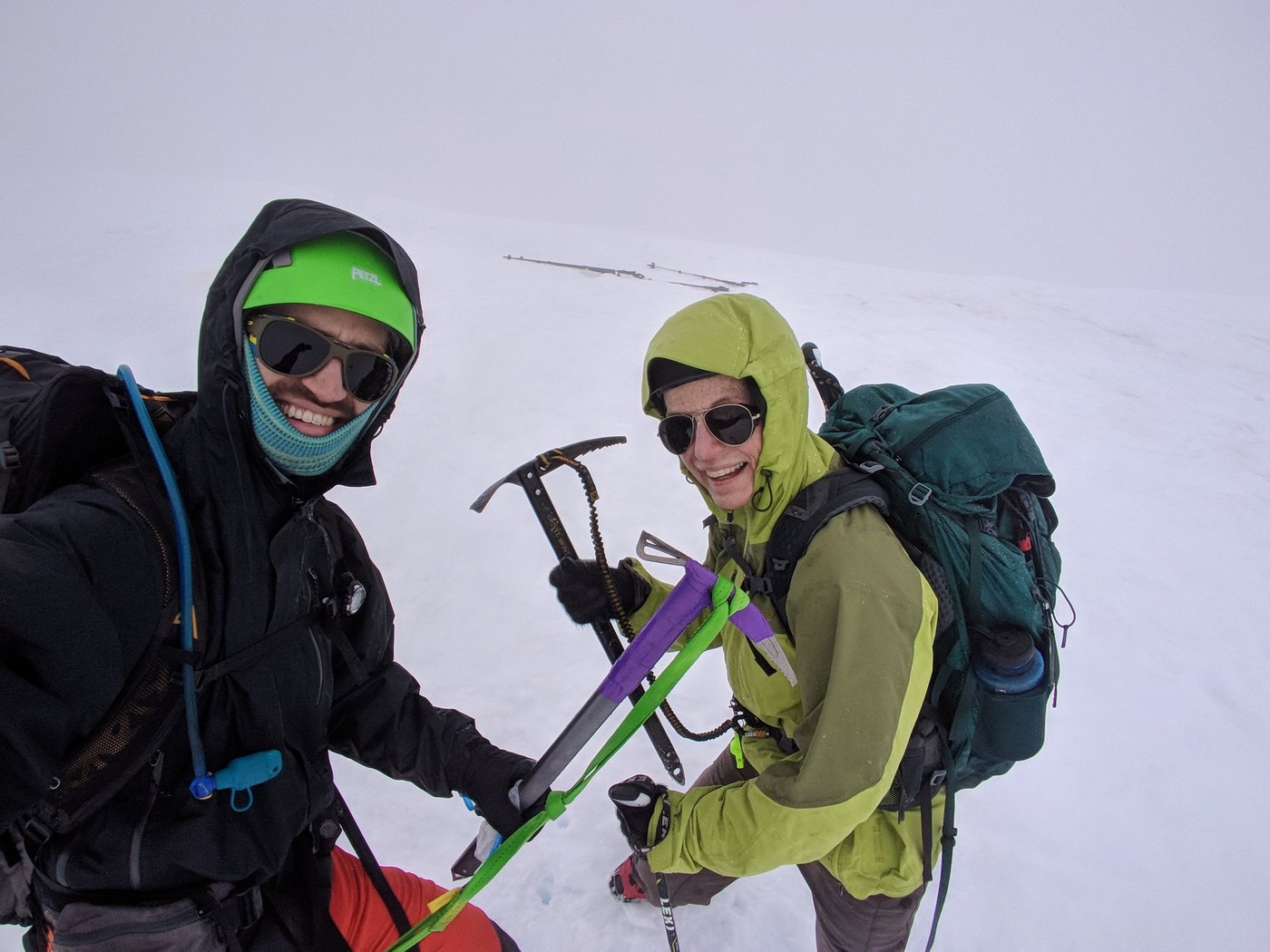 This trip report is amazing. The story brings me such joy. Thank you for sharing! And nice work!

Well thank you for taking the time to comment Jessi, it was a very special time together.

I enjoyed your report! Are you Jasper? I looked at your reports after receiving your comment on Joe Watt Canyon! We hiked this in September of 2007, but I never wrote a report as we were on the trail 15 hours and it was before we had a digital camera! I was 68 and Bob was almost 70! When we got to the top, there were 4 people probably your age and they clapped as we arrived! They told us we inspired them to continue as they thought if we could do it, they could! :)!

Yes I am Jasper (Ellen in the 'real' world). I'm honored that you enjoyed my 'report' story-journal, I always enjoy yours. Congrats on your MSH summit in 2007---and how awesome to be cheered on and be told that you are inspirational; I agree, you are!! I turn 65 this year so inspiration is helpful! I really enjoy all your flora and avian pixs too as my husband and I are becoming avid birders. I sherpa his bird lenses around for him. Happy Trails.