Skip to content
Mount Washington, Owl Hike Spot, Upper Twin Falls TH A couple miles of steep uphill grind, followed by some gentle road-trail. A nice conditioning hike, despite the constant drone of traffic along I-90. Armed with two previous trip reports and my ... https://www.wta.org/go-hiking/trip-reports/tripreport-2007052509 https://www.wta.org/site_images/trip-reports/2007/2007052509a.jpg/@@download/image/d213fb2c12e6170341960d3472dc0f05_photo1 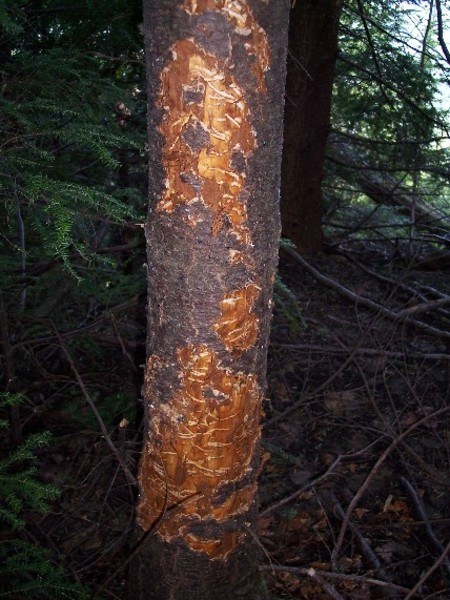 these trails in our Hiking Guide
A couple miles of steep uphill grind, followed by some gentle road-trail. A nice conditioning hike, despite the constant drone of traffic along I-90. Armed with two previous trip reports and my Green Trails 206S map, I set out to find my way to the summit of Mt. Washington. It quickly became obvious that I would want all three; the map doesn’t show all of the roads that you encounter. The following is my attempt to provide comprehensive directions on taking the “standard route” all the way to the summit. From eastbound I-90, take exit 38, turn right at the stop, then make another quick right turn onto gravel to the parking lot. When I pulled in at 8:10 a.m., a curious black-tailed doe stood in the middle of the gravel lot, watching me approach, only reluctantly walking away as I got closer. Nothing in the parking lot identifies where you are, so find the unmarked trail on the SW side of the parking area, near a donation box. Head up the steep but short trail a tenth of a mile to a gravel road, where a signboard provides information. Continue uphill on the gravel road another eighth of a mile, to where it levels off at an intersection with another gravel road. Continue straight (west), seeing a sign that reads “IRON HORSE STATE PARK. NO MOTORIZED VEHICLES ALLOWED”. Immediately across the road from this sign is what appears to be a trail. This isn’t it. From the sign, continue west 50-60 yards to the actual trailhead (unmarked), about 0.3 mile from the parking lot. (Other mileages will be from the trailhead, not the parking lot.) The trail sets out from the left side of the road, dropping between two alder trees, then quickly gaining altitude. The trail starts out steep and rocky, passing a number of rock faces used by sport climbers. One has a significant overhang, providing a rock ceiling. The only reliable stream crossing occurs early in the hike. Later on, a short side trip from the 2 mile point will provide the last opportunity for water. In a few places, rockfall has left boulders in the trail. There was only one place that looked potentially dangerous, if covered in snow and ice. This time of year, it was easy to walk around (or over if you prefer). Continue up the rocky trail to a junction, approximately 1.4 miles. Take the path to right, which at this writing is marked by two signs reading “MT. WA”. In another quarter mile, reach the first significant viewpoint, a vertical rock face on the left featuring a low rock bench facing out to the west and views of the valley. This is the “Owl Hike Spot”, popular for sunset views. From here the trail levels off somewhat, and becomes easier to walk. At about 2.0 miles, the next junction is marked with a small sign. The options are the Standard Route to the left, or the Alternate Route (Washington Creek Basin) straight ahead. Your last chance for water lies 100 yards up the Alternate Route. Go left to follow the Standard Route. There were only two blowdowns along the trail, and the first appeared about ¼ mile past this junction. It was only 7-8” in diameter, but at belly-to-chest height, too high to step over. At ½ mile past the junction, I noticed a tree on the left side of the trail that had a lot of its bark recently scratched off. My thoughts of vandalism were quickly dismissed when I saw the numerous claw marks left behind. I had not seen any wildlife other than the deer in the parking lot, but I started paying more attention after this. At nearly three miles, I encountered the first patch of snow. Ten minutes later, as the steep dirt path turned to gentle gravel road, another black-tail deer stood and watched me until I reached for my camera. Then it bounded off. The rest of the route is almost all on road-trail. The next junction occurs at approximately 3.3 miles, where a short scramble from the road you’re on leads to an intersection of three others. To the right, rocks block the route, marking it as the wrong way. To the left, the uphill road is marked with cairns as the correct route. At about 4.2 miles, a hairpin switchback up and to the right is possible, onto an overgrown road. Others have mistaken this as the way to the summit. Bypass it and continue straight and slightly downhill to the flat but relatively narrow ridgetop route that bridges two valleys. While crossing this Great Wall (as it is labeled on the map), you can see your summit destination to the right. At the far end of the Great Wall, ascend the road-trail to another intersection, on a plateau. This section was completely covered in snow for me, but solid enough to avoid post-holing. At this intersection is where you should make a hairpin right turn to the right, keeping the No Trespassing signs for the Cedar River watershed on your left. A scant half mile later, where the road-trail splits to go left and right, continue straight, on the dirt trail that winds its way up the final quarter mile, past trilliums and other wildflowers, overlooking Chester Morse Lake/Reservoir below, to the summit at 4300 feet, 5.5 miles. Wander around the summit area to appreciate the views. Starting from the NNW (Little Si and Mt. Si), pan clockwise, seeing the whole range of local peaks. At 38 degrees, the top of Glacier Peak was visible when I was there. To the south is Mt. Rainier. To the southeast, view the Great Wall before heading back down to cross it on the return trip.
Trilliums 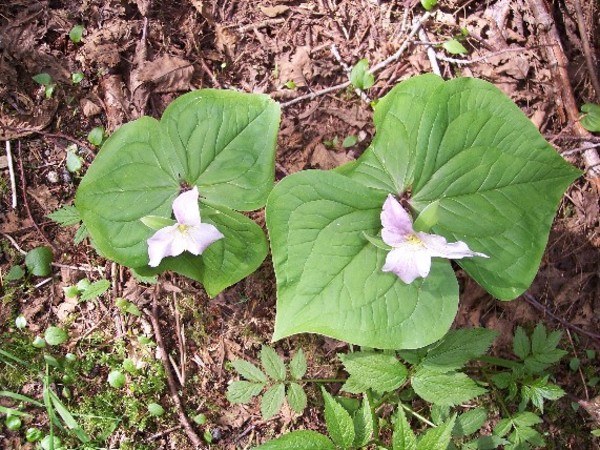