Skip to content
Mt Tahoma Trails - North Unit to Copper Creek Hut ~ Today’s trip to the Mt Tahoma Trail System (North Unit, we still can’t access the South unit due to the bridge over the Nisqually River being washed out in last year’s storms. A storm blew in ... https://www.wta.org/go-hiking/trip-reports/tripreport-2008012000 https://www.wta.org/site_images/trip-reports/2008/2008012000a.jpg/@@download/image/e31fb6e927aa78fd88dafdc797a90e17_photo1

Print
the sun teased us 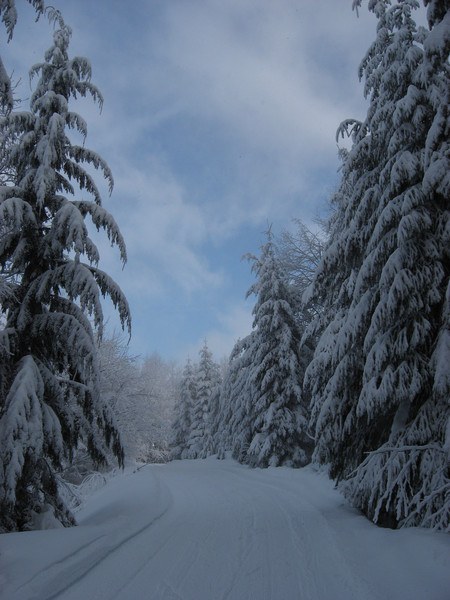 these trails in our Hiking Guide
~ Today’s trip to the Mt Tahoma Trail System (North Unit, we still can’t access the South unit due to the bridge over the Nisqually River being washed out in last year’s storms. A storm blew in last night and it was supposed to clear up this afternoon. I envisioned another “The hills are alive” burst of song, as I twirled in the Shadow of Mt Tahoma (Rainier) But she never showed herself; she didn’t even tease us. (what is worse than a tease?) So today’s song is “The sun’ll come out tomorrow”. We got an extra two miles (one each way) because the upper snowpark is closed and we had to ski up from one of the lower snowparks. This was not the smartest trip for me to try out/break in the new tele setup I have (even though it is what a good number of the patrollers have). Someone really needs to “stoopid slap” me for choosing this as a break in trip. (I only got 20 minutes on this setup last year before the Pineapple Express blew in and washed our ski season away; funny it happened when I was on this very trail) I love Love LOVE the Alpina Cross Terrain skis and have no issue with the Volie Hardwire CRB bindings. The plastic Scarpa boots however, are another story. I’ll save them for more hardcore stuff, but for this kind of touring, they are overkill and the ripped the hell out of my feet. I’ve got major (we’re talking 2”+ across) blisters on both arches and don’t even get me started on my heels. (I think I may be l lucky recipient of a couple of black toenails as well) I discovered after the fact that I had the boots in the “locked” position, so I was getting no flex which didn’t help matters (oh yeah, I’m sore as heck too) The Banshi (my cute little fire engine red 4X4 who is enjoying getting out and about again) handled the steep, snow covered logging roads heading up out of Ashford with ease. I didn’t even need to chain up, although I do wish that I had gotten around to putting sandbags in the back to weigh down the rear end (very different trip down) I was actually a bit concerned as we hadn’t hit any snow by the time we hit Elbe. I knew that if we didn’t at least have some snow by Asford that we might not have quality white stuff on the trail. As soon as I saw snow in the trees, I knew it had stayed cold enough that the new snow that fell last night was in good condition. And the bonus was that unlike my and Bryan’s trip two weeks ago that was solid ice from Orting to Longmire, the roads were perfect until we turned off of the highway. The blue sky flirted with us, but never made a formal appearance. We got lucky and the “artic blast” didn’t come in with high winds and it stayed very pleasant all day. Snow was falling lightly in big fluffy flakes on our way back from the hut. Lunch at the hut is always an interesting social event and lots of fun. It was THE place to be today at 12:30 PM, and we had lots of fun chatting up interesting people. I was coveting some guy’s avocado while eating my disgusting peanut butter sandwich (those who know me, know that I loathe the stuff, but it packs well, doesn’t squish, and on whole wheat bread is a good source of fat, slower burning carbs, energy and protein for these winter treks, so I make myself eat it) As I got down to the parking area, I noticed a vehicle had a “malfunction” in the parking lot and several people were chaining it up. That did not bode well for the trip down. I hoped I could make it without chaining up, but knew that was not likely. I did a “test brake” and slid a bit, but thought I’d go as far as the next snow park to see what happened. Well, the expected happened and I started to slide all over the place. As Doug, being from Texas is not comfortable with a tuck sliding around near a cliff with a steep drop off and I’m not comfortable with the thought of banging up my beloved Banshi, I pulled over and chained up (didn’t have much choice as the SUV down the hill from me was doing the same thing on the corner, so I didn’t have anywhere else to go. Even with the front wheels chained up, the back end was sliding around in a rather disconcerting manner. Mind you, I’ve lived and worked in National Parks and ski resorts in Wyoming, Colorado and Utah. So I can handle steep, curvy nasty roads, but with the compacted snow and ice surrounded by deep stuff (I had fresh snow driving up) I really had to pay attention and to say that it was a bit intense would be a gross understatment. When I finally saw bare dirt, then pavement, I wanted to kiss it. The rest of the drive home was uneventful and we enjoyed peppermint hot chocolate at Starbucks (I have gift cards) I came home, and soaked my poor feet in hot salt water. I have a snowshoe trip tomorrow and Tuesday, so I don’t have time for pain. The rest of the pictures are available here http://wildcelticrose.net/lisasplace/mttahomaski012008.html ~L
at the Copper Creek Hut 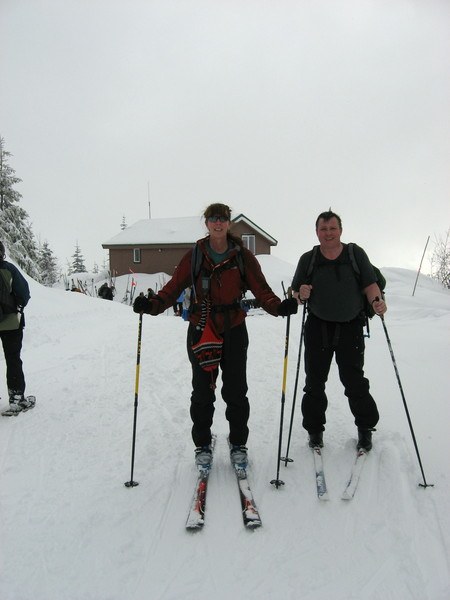