It’s the time of year when creative costumes come out of every closet, teens watch scary movies while eating popcorn after midnight, and chain stores are filled with gory props. So we've pulled together a handful of spooky stories to help you kick off the haunting season. Here are a few that might just keep you awake the next time you find yourself deep in the back woods. Don’t say you weren’t warned …

I’ll begin with my own story. Years ago I had a very vivid dream about a specific location. One I had never been to. In this dream, I stumbled back and forth in a snow-filled creekbed trying to find a large lake. It was eerily quiet. I knelt down, defeated, only to realize that I was kneeling on the frozen lake and it was cracking around me. Startled, I woke.

Now, imagine the creepy feeling I got when I went for a snowshoe trip years later with some friends, only to realize that the place I had dreamed about was real! As we snowshoed to Lake Eleanor on the outskirts of Mount Rainier National Park, I stared in disbelief at the lake that had haunted my dream. Needless to say, I stayed far away from the edges. How had I seen this place in my dream so long before I’d ever physically been there?

"Day after day, Harry suspected he was being followed."

From Bigfoot to ghost towns, the wild is full of odd, haunting stories. A friend we’ll call “Harry” claims he heard footsteps behind him as he backpacked for days in a remote canyon in Arizona. He was solo hiking off-trail where people rarely visited. On hearing the footsteps, he welcomed the thought of company to share stories. No one ever materialized. When he stopped, the footsteps stopped.

Day after day, Harry suspected he was being followed. When he’d stop for lunch or to make camp, he’d do it out of sight to see if someone came along after him. No one ever did.

“Maybe it was an echo?” I skeptically questioned. Harry had thought of that too, but nothing else echoed—not his own footsteps or even his voice. He tried shouting to the mysterious person several times, “Who’s following me?” but no one ever answered. At one point, the footsteps sped up and became very loud. He shouted again, but still, no person appeared.

By the fourth day of his trip, the situation felt so odd that Harry decided to finish early and headed up a different route than originally planned. The footsteps followed him nearly all the way out to his waiting vehicle. Years later he was reading about the history of the canyon where he hiked and came to learn that there had been many battles fought by Native Americans in the area.

Were the ghosts of those who passed on accompanying him on his trip? He’s never been able to explain who—or what—had been right behind him as he hiked that lonely canyon in Arizona …

"There in the fire, they saw faces."

If you start asking people about supernatural experiences while camping or hiking, it’s amazing how many have encountered something baffling or peculiar. I recall from my childhood a story of some family friends and their unexplainable, uneasy feelings as they camped along a river in the Canadian backcountry.

During their trip, their senses had been heightened, but no one could point to any obvious reasons for feeling jittery. They went on about camp chores and finished the evening by sitting around the fire, eating dinner and taking pictures. When they returned home and developed their film from the trip, they were in creepy disbelief. There in the fire, they saw faces.

Very clear faces, coming up from the flames. I recall seeing those picture as a kid, and to this day, I can remember the very evident eyes, noses and mouths of the phantoms that burned toward the sky … 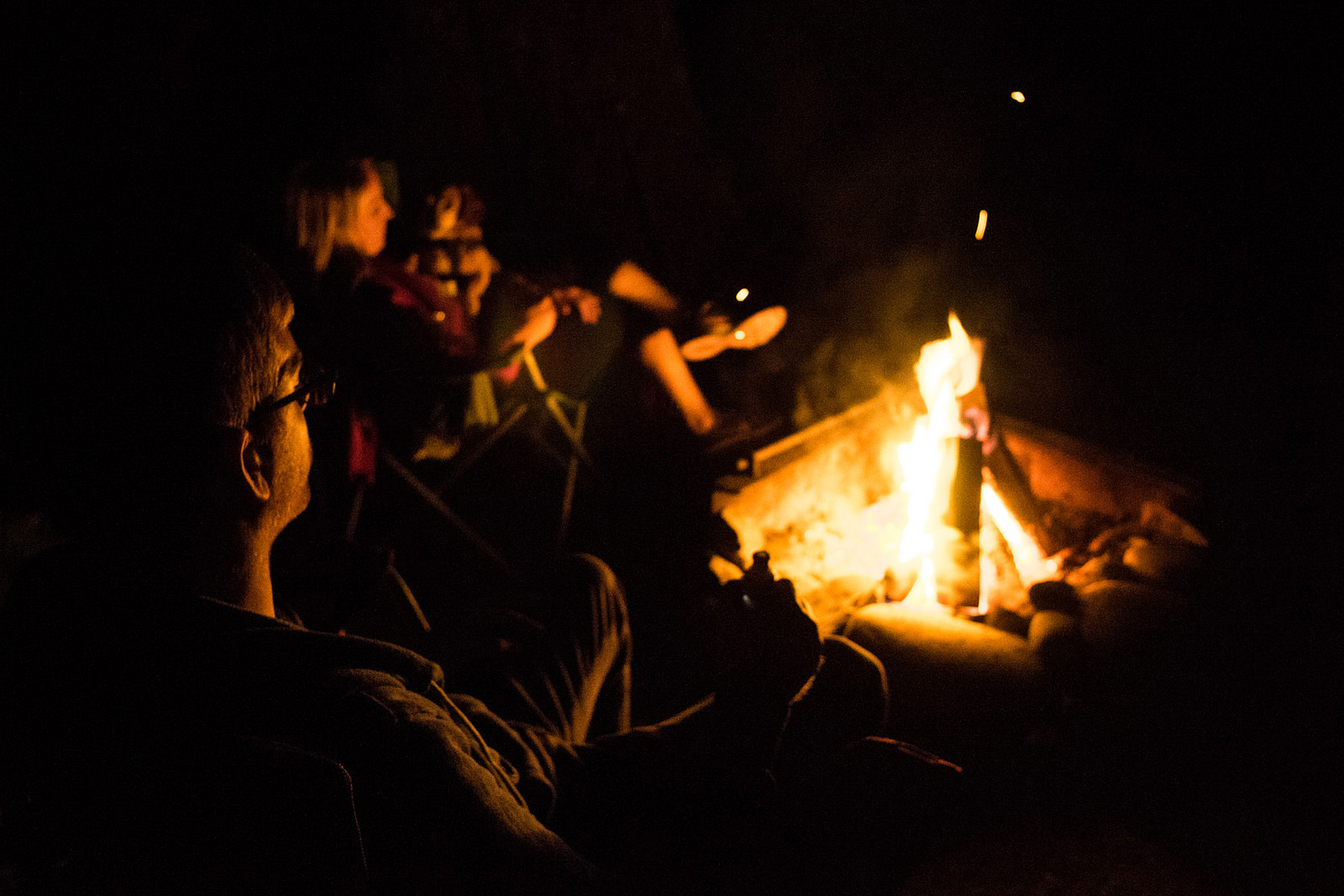 The orange glow of campfire sets the scene for a night of spooky storytelling. Photo by Rob Bibelhauser.

"'I must be dreaming,' she thought"

Whether or not you believe in ghosts, there are plenty of stories out there to make you question their existence. One such story comes from WTA regional correspondent Kimberly Craig, about a supernatural encounter she experienced while camping in Cement Basin, near Crystal Mountain.

In August of 1989, she was reeling from the death of her beloved brother, who had passed on from an extended illness the previous winter. She’d been doing a lot of solo hiking to come to peace with his death. When she was asked to backpack into the wilderness to collect trash as a favor to a wilderness ranger friend, she naturally agreed. It was her first solo overnight trip since her brother’s death, and she hoped to find healing in the quiet arms of Mother Nature.

As the storm subsided she decided to get some fresh air and shake the voice out of her head. As she stepped out of her tent, she was in complete disbelief. There, right in front her, with an outstretched hand, stood her brother.

Numbed by shock, she reached out to take his hand. He explained he was at peace, and asked her to take comfort in the fact he was no longer suffering. She went back inside her tent, feeling a tremendous sense of comfort and gratitude in the visit.

The next morning, the experience sank in and she was overcome with fear. She rapidly tore down her camp and left so quickly that she forgot the trash she’d collected. She has not been back to the area since …

"At the side of the road, something stood there looking at him."

If those stories aren’t enough to give you chills, consider the unexplainable things that are reported on a daily basis across America, such as UFO sightings and alien encounters. One such experience happened to none other than the former editor of this very magazine.

It was late in the evening when Eli Boschetto and his wife, Mitzi, pulled into a campground in Northern California’s redwoods. The forest seemed to enjoy a sinister game, as chilly coastal fog mixed with campfire smoke swirled through the trees, casting strange shadows in the canopy and undergrowth. Tired, they found a spot to set up camp under the lights of their car’s head lamps. In the distance, muffled voices and laughter from unseen campers wafted through the filtered darkness. Focused on getting an early start the next morning, they opted to skip a campfire and went about bedtime routines.

Conveniently, the restrooms were only about 100 yards down the road, a short walk for washing up before retiring. With bag in hand, Eli set off down the black pavement, his headlamp’s light reflecting off the drifting smoke and fog. Suddenly a movement caught his eye.

At the side of the road, something stood there looking at him. Through the haze and darkness, he tried to discern what the creature was before him. It stood about 2 feet in height, completely gray, with a large round head and curious eyes. “It must be a raccoon,” he thought

But … no. There was no mask. And no fur. And no tail! The creature cocked its head, looking back. Eli took a tentative step closer to get a better look. The creature withdrew slightly, peering cautiously back. What was this thing?

Time seemed to halt as the two stared at one another. Remembering his head lamp, Eli reached up to set the light brighter. The movement startled the creature, and Eli particularly noticed that the creature walked off on two legs, dissolving into the misty, shadowy darkness.

Every hair on his arms and neck was electrified, and chills ran down his spine. What had he just seen? He scanned the underbrush with his head lamp, seeking to comprehend what he’d just witnessed, but the small, gray, upright creature with no fur and no tail was nowhere to be seen. Had he just seen an alien?

It was a sleepless night, as every creak and crack in their pitch-black tent seemed to alert him to the possible presence of interstellar beings, watching them from the woods nearby …

"Since 1941 there have been 532 reported Bigfoot encounters in Washington"

And speaking of things watching you from the woods nearby, this collection wouldn’t be complete without a story about Bigfoot. Washington state has the highest number of Bigfoot sightings in all fifty states. Don’t believe in Bigfoot, aka Sasquatch? Steve “Mojo” Wilkins, co-founder of the Washington Sasquatch Research Team challenges you to consider otherwise.

Since 1941 there have been 532 reported Bigfoot encounters in Washington. Even if 90 percent of those are made-up or misidentified stories, that still leaves 10 percent as credible. Wilkins also makes a point to note that sightings are incredibly underreported, and many people have seen or heard one and not bothered to give the stats.

According to Wilkins, Bigfoot, or Sasquatch, is a species like any other animal that roams the forest. There are estimated to be between 500 and 1,000 of these creatures living in the forests of Washington, hunting meals, eating fish, raising young and living amongst us as we roam the hillsides. He points out that Native American lore is filled with stories of the hairy men stealing fish from nets and warding with tribal members. These run-ins, he explains, are the reason they avoid humans.

“But why haven’t they ever found a dead one?” I ask, skeptical.

“Have you ever seen a dead bear in the woods?” Wilkins responds. “If you were dying in the woods, would you go lie on a trail or would you seek out a quiet hiding place?”

He proceeds to tell me how they’ve been watching me for years as I’ve hiked through the hills, quietly curious about my presence, hiding from my sight and following me to learn more. Hikers have seen and heard Bigfoot on trails near Mount Rainier, Rattlesnake Lake, Tinkham Campground, Snow Lake, Grass Mountain, the Enchantments, Holden, Wallace Falls, Rock Creek Campground, Chopaka Lake … the list goes on and on. Could it be that these creatures do in fact live amongst us? And watch us as we wander down trails?

From premonitions to Bigfoot, the unexplainable occurrences in the outdoors will likely always remain a mystery. If nothing else, the shrouded veil of obscurity can jog our imaginations as we continue to venture into the wilderness on some of the most beautiful trails in the country—perhaps with more company than we're aware of.

This article originally appeared in the Oct+Sept 2012 issue of Washington Trails magazine.Support trails as a member of WTA to get your one-year subscription to the magazine.