The Trees are Talking

The Trees are Talking

One of the best things nature has to offer is its sounds. From the songs of birds trying to attract a mate to the squawks of squirrels sending warnings about a nearby predator, certain sounds remind us that, just like people, wildlife communicates all the time.

Chitchat in the wilderness, human or nonhuman, provides an immersive experience and can let us appreciate the complex relationships in nature. But what about the communication we can’t hear? Turns out, communication exists in more than just audible forms. Plants are chattering constantly — with other plants and with nearby bacteria.

Small clusters of microbe (bacteria) communities living near the roots of plants, called rhizospheres, can actually help defend plants when pathogens or other threats strike.

“Plants are stuck where they are, so they communicate with microbes that are in the soil, water and air, and recruit them in,” said Sharon Doty, professor of environmental and forest sciences at the University of Washington. “It’s a partnership, a plant-microbe partnership that really allows the plants to grow in the environment.”

Sharon researches plant-microbe communication in cottonwood trees, the source of those little puffs of cotton that drift through the air in late spring. If you’re a fan of riverside hikes, you’ve probably seen these trees growing right through rocks along the river, with little to no soil — a seemingly impossible place for plants to flourish.

That’s exactly why Sharon is studying cottonwood trees. They’re able to settle down in these environments because they’re “communicating” in a special language with bacteria in their rhizosphere.

“Communication is when a plant produces a chemical in really, really small amounts that only certain bacteria could recognize,” said Carrie Harwood, Sharon’s colleague, who is a microbiology professor at the University of Washington. “The bacteria might turn on some genes that would be helpful to the plant in response.”

When plants in environments with little soil have a hard time getting nutrients like nitrogen, some of the nearby bacteria can turn on genes that take nitrogen from the air and convert it into a form the plant can use. In exchange, the plant provides sugar — a product of photosynthesis — as food for the bacteria. It’s no different than borrowing a cup of sugar from your neighbor and promising to bring them a few cookies from the batch in return.

This idea of a signaled exchange between plants and other organisms isn’t a new one—scientists have known about the symbiotic relationship between mycrorrizhae (fungus) and trees, and certain types of bacteria in nitrogen-fixing plants, for a long time. 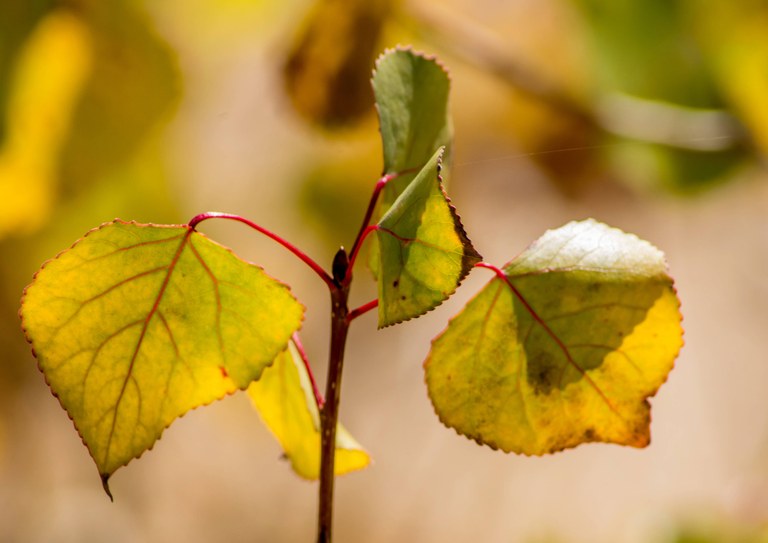 However, until recently, this communication was only thought to exist in a select group of plants. You may remember learning about the nitrogen cycle and those “nitrogen-fixing” plants that, unlike most plants, are able to use nitrogen from the air and soil. Because of this ability, they’re often grown with other plants to share that nitrogen and make them grow better. Nitrogen-fixing plants, which include legumes such as peanuts and soybeans and a few others, like clovers and alder trees, have one major thing in common. “Nodules,” little bacteria-packed lumps, grow on their roots, giving them the help they need to receive nitrogen. Once they get nitrogen from the bacteria, the plants thank them with that metaphorical cup of sugar.

Sound familiar? That’s because this plant-bacteria communication is essentially identical to what Carrie and Sharon are studying. The only difference is that cottonwood trees, and most plants, don’t have nodules.

The more we understand nature, the better equipped we are to protect it.

So what’s the big deal? Basically, this communication between plants and microbes, exchanging food with bacteria for nitrogen, is way more common than previously thought. And there are a lot of types of bacteria at play — more than 2,000. It’s a significant relationship that is vital to the health of plants, and it’s only just now being understood.

In order for Sharon and Carrie to begin to understand this communication and “listen-in” on plant-bacteria conversations, they grind up cottonwood roots into a “smoothie” to extract the bacteria.

By subjecting plants to stressors such as a lack of water or nutrients, researchers can see the effect of such stressors on the health of plants — and if bacteria make a difference.

Throughout their research, Sharon and Carrie have both been surprised by just how vital these bacterial neighbors are to a plant. In fact, they’ve sometimes found the difference to be a matter of life and death.

“There’s bacteria everywhere, doing a really important job to keep the cycle of life going on the planet,” Carrie said.

Back at their lab at the University of Washington, some plants they tested with the bacteria survived, while the ones without it died. Generally, though, the presence of bacteria help the plants grow better, which happened in many ways.

One of the things Sharon found most astonishing in her research was discovering that in addition to helping plants get the nutrients they need, the bacteria could also make the plants survive with less water. In the lab, plants with bacteria met a better fate than those without when Sharon restricted their water.

Exactly how this happens is a major question in Sharon and Carrie’s research. But it’s a significant finding, because if bacteria can give plants that lack of water a better chance at survival, crops and other plants can become more drought resistant — a growing importance in our changing climate. Sharon hopes that through her research, natural solutions can be used to improve large-scale agriculture and lessen the need for herbicides and pesticides.

“We’re blessed to have our own rainforests — our temperate rainforests, in Olympic National Park — and all these amazing places that are still natural,” Sharon said. “They’re absolutely precious.”

We’re lucky to live in a state with a wealth of opportunities to connect with nature. And while there’s nothing quite like filling your lungs with fresh air as you’re taking in a well-deserved vista at the top of a trail, it’s worth taking a moment to appreciate the small, often forgotten players, like microscopic bacteria, that help maintain and create our trails in the first place.