When Nancy McKinney and Lynne Glore of Olympia first started walking together, they had no idea it would lead to an epic adventure. The friends, colleagues and commuting partners were just looking for a way to let off steam from their stressful community-college jobs. Walking did the trick, and it didn’t take long before they started searching out longer routes. The time on trail gave them plenty of time to talk, and one day in 2011, Lynne told Nancy about an article she’d read about a guy who was walking around the world.

“We thought, we don’t want to do something like that,” Nancy said. “But we could walk across the state!”

The idea stuck. Eventually, the two decided that they’d give it a go. 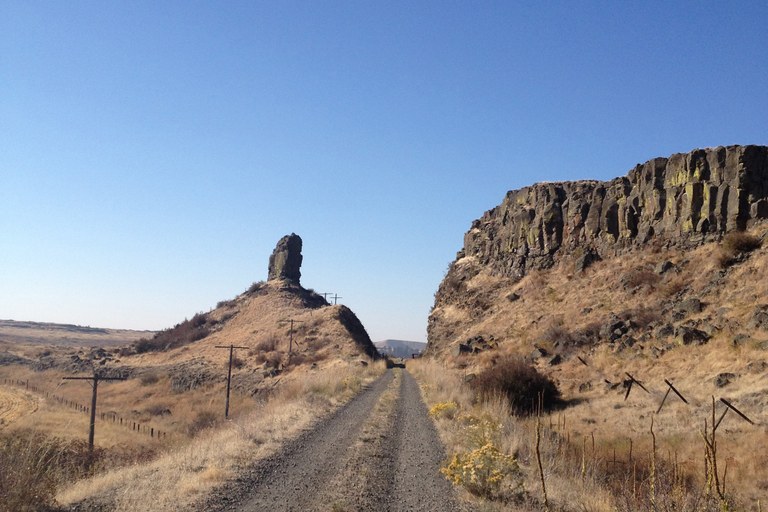 Lynne was retired by this time, so she did the majority of the trail research. There was plenty to do. The main trail that would take them from east to west, the John Wayne Pioneer Trail — which was recently renamed as the Palouse to Cascades State Park Trail — was at times remote and didn’t allow camping. There were accommodations and the occasional ride to and from the trail to arrange. Even after relying on the Couchsurfing network, friends of friends and hotels, there were still gaps to fill, so Lynne took a road trip to canvass parts of the route.

"Be patient and not in a hurry. That first day was about shifting gears and being excited and setting off.”

The trip started to take form. By the spring of 2012, they shifted their attention to physical training to prepare for the 20ish miles they’d walk each day of their 3-week journey, which started in October.

The two quickly fell into a rhythm on trail — both together and apart.

“I refer to Lynne as the hare and me as the tortoise,” Nancy said. “We don’t have the same pace at all.” 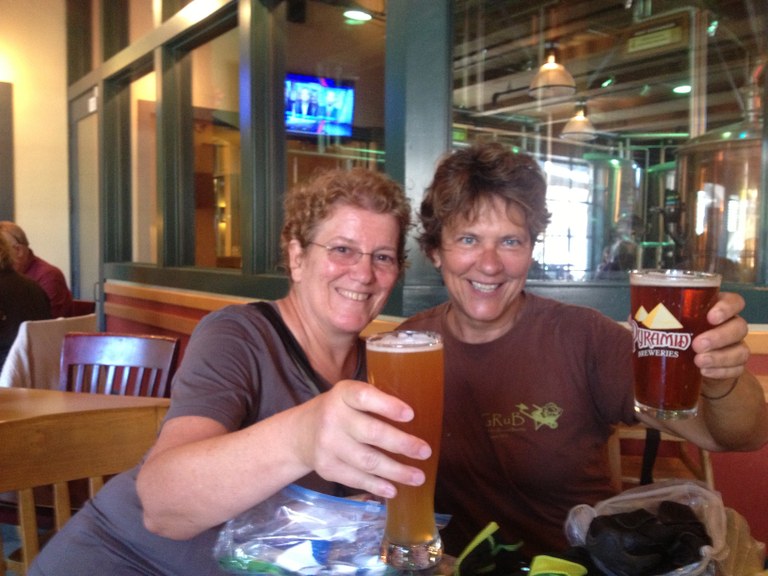 “We would start out each morning walking together for about an hour,” Lynne said. “And then we’d split up and meet up every half hour or so. And that worked. … Even though we were doing this journey together, it was also very solo. It was a personal journey.”

As they made their way across the state, both women came to the same realization: Washington had more to offer than they’d ever realized. Lynne loved discovering small towns that she’d never heard of, even after having gone to college in Eastern Washington. For Nancy, who’d spent most of her adult life on the west side of the state, experiencing agricultural Washington was eye-opening.

“We were amazed,” said Nancy. “I kind of tear up thinking about it, but it restored my faith in humanity.”

“What was amazing was seeing our agriculture up close,” she said. “Watching the people in the apple fields picking apples. What grueling work that is! Every time I eat an apple now, I think of them.

The trek also introduced the women to the people who call Washington’s rural areas home. Their kindness — even towards complete strangers — was the biggest surprise of the trip.

“We were amazed,” said Nancy. “I kind of tear up thinking about it, but it restored my faith in humanity.”

Every day, the pair encountered helpful people who took them into their homes, fed them and gave them rides. One time, they thought they had a reservation at an inn, but the night before their stay they realized they didn’t — and the inn was full. The person they were staying with at the time called around and found someone to take them in.

While they were met with the utmost kindness, people didn’t always understand what Nancy and Lynne were doing — or why. 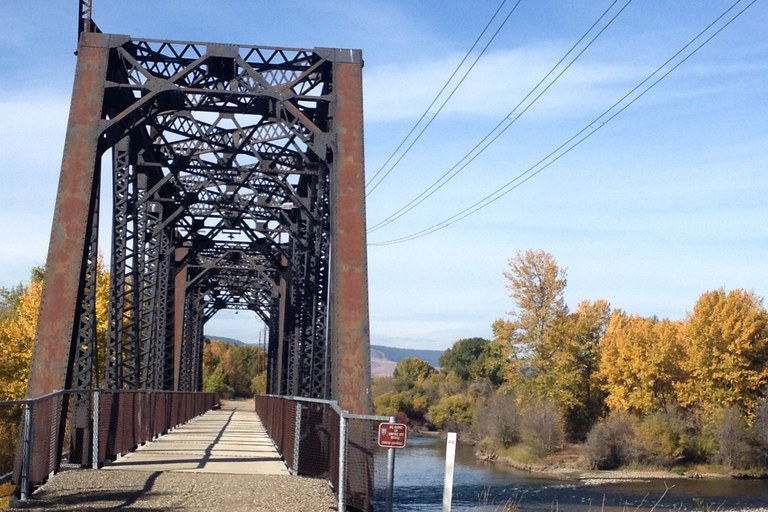 “One day we were walking in the Palouse and this man stopped with his truck and said, ‘What are you two ladies doing?’” Nancy said. “(We told him we were) walking across the state. He said, ‘Why would you do that?’ Well, because we like to walk and it’s a great adventure. And he looked at us for a while and said, ‘Well, I think you need a horse.’”

While Nancy and Lynne had a good sense of humor about people’s reaction to their epic adventure, things weren’t always easy on trail. The duo did have some challenges to work through. For starters, they had overpacked.

“When you’re carrying everything, you really feel it,” Nancy said. “You start thinking, I don’t really need this. I can get by without it. I’m a knitter and I thought I could do some knitting along the way. Well, yeah, but that yarn weighed half a pound, so I didn’t need it. We were jettisoning things out of our packs the entire trip. We really got down to basics by the second week.”

There were also trail issues to contend with. In some places, especially the most eastern part of Eastern Washington, the trail was overgrown, forcing the women to figure out alternative routes on nearby roads.

For Nancy, the biggest challenge — and something that plagued her the entire trip — was her feet. Having expected a relatively smooth walking trail, she’d brought shoes that didn’t protect her from the rooty and rocky trail. She was continually plagued by blisters.

“I had to really dig deep on days to make myself … accomplish the miles for that day,” said Nancy.

At one point she took 2 rest days to heal while Lynne continued on alone. The two met up later and continued walking to Thorp, a small town just outside of Ellensburg. Up until that point, they’d lucked out with good weather. But in Thorp, a big storm blew in. That, combined with Nancy’s foot problems and a family issue at home, led the duo to break from the trail 12 days after they’d set out. 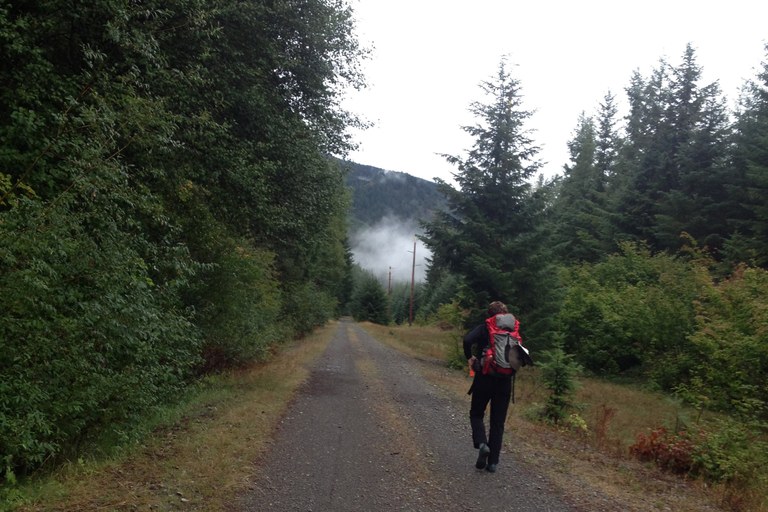 “It just seemed like, we got this far and it was fabulous,” said Lynne. “Let’s come back and finish it up later. And we did.”

The following September, Nancy (equipped with better shoes) and Lynne returned to finish the last 6 days of their walk. The section through Snoqualmie Pass on the Iron Horse Trail was a highlight of the trek for both of them.

After making their way along the I-90 Trail, they reached Seattle’s King Street Station, their final destination. It was a dream come true — and an emotional moment for the duo.

While their east-to-west adventure was over, the experience of walking across Washington cemented in both women a love of epic walks. In 2015, Lynne walked across Washington from south to north on the PCT. And the two women are currently training for their first international trek together, England’s 250-mile Coastto-Coast Trail, which they’ll tackle in the fall. One day they may just decide that a walk around the world doesn’t sound so bad after all.

East to West Across Washington

This article originally appeared in the Jul+Aug 2018 issue of Washington Trails Magazine. Support trails as a member of WTA to get your one-year subscription to the magazine.