Where the Wild Things Are
Photo courtesy Roger Christophersen.

Where the Wild Things Are

Wolverines with chest markings as unique as snowflakes. Canada lynx with paws the size of pingpong paddles. And of course, marmots with their mouths full of lupine. We live in a region that is home to a diversity of fascinating wildlife.

It’s a treat to see wildlife, and many species are quite elusive. You could hike for decades and never get lucky enough to see a wolverine, for instance. For biologists working to study wild animals, the slim chance of seeing them — let alone capturing and handling them — can make research tricky. That’s where wildlife monitoring using trail cameras comes in. Cameras are a noninvasive, cost effective way to study elusive wildlife that live in remote, wild areas.

“It’s amazing what we don’t see,” said Roger Christophersen, a wildlife biologist at North Cascades National Park. “Cameras are like a remote pair of eyes.” 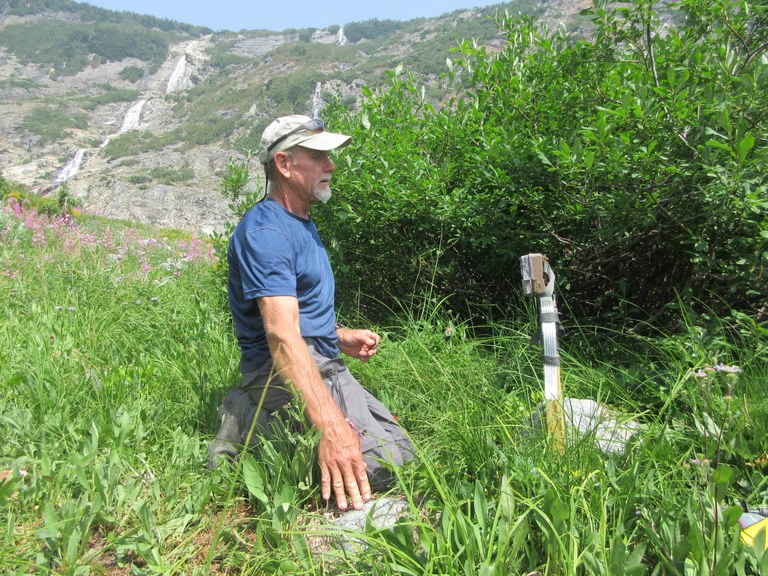 Roger gets to hike through some of the most beautiful, wild trails in Washington state, all in the name of research. Currently, he’s backpacking to trail camera sites in remote areas of the national park to study local marmot populations, which are in significant decline.

It’s not exactly what you’d call a walk in the park.

While marmots aren’t rare animals, they do live at high elevations. With limited road access in the North Cascades, getting to their habitats can be challenging. A typical trip for Roger starts at the valley floor, and involves 2 to 3 days of hiking 4,000 to 6,000 feet per day.

After finally arriving at the trail camera site, Roger’s first priority is checking the batteries of the three to eight cameras that are set up there, pulling the SD cards that are now loaded with motion-triggered wildlife photographs and replacing them with new memory cards.

“It’s like Christmas when we check these cards,” Roger said. “Oftentimes the critters we see are so elusive.”

Photos of moose, wolverines, Canada lynx, wolves and even hikers are captured and stored in these little trail cams. Each picture contributes to the inventory of species that exist within the national park, or the “biodiversity catalogue,” as Roger calls it. For this project, he is looking specifically for carnivores: By monitoring their presence and collecting their scat to determine what they’re eating, wildlife biologists like Roger are researching what might be driving the decline of the national park’s marmots.

Roger and his team are collaborating with Washington State University to observe how marmots behave in their natural environments. If the opportunity arises out in the field, they walk toward a marmot and study its behavior to observe how it reacts to predators. After all, to marmots, humans are predators, whether or not we consider ourselves to be.

For now, it’s too early to tell exactly what’s going on with the marmot population in North Cascades National Park. Climate change may also play a role, allowing predators like coyotes to reach high elevations when snowpack levels decrease.

Less snowpack can also stress marmots during hibernation, so if they’re waking up earlier, there may be less food available for them. Either way, it’s a complicated issue, and there’s likely a combination of factors that have contributed to their decline. And while Roger and his team continue to study the marmots, a league of volunteers are studying their predators. 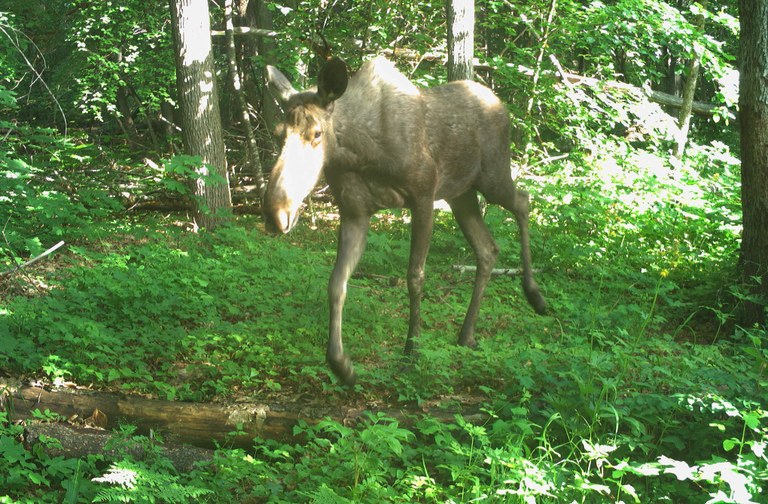 Conservation Northwest is a Seattle-based nonprofit organization that protects, connects and restores wildlands and wildlife from the Washington coast to the British Columbia Rockies. Through their Citizen Wildlife Monitoring Project (CWMP), they’re studying the presence and  behavior of elusive native species.

The CWMP is a community-science-powered effort. More than 100 volunteers hike to remote areas to install and retrieve trail cameras in Washington’s Cascade Range, as well as in northeast Washington and southern British Columbia. During the winter, volunteers also conduct snow tracking surveys at Snoqualmie Pass. After collecting and reviewing the data, CWMP shares its findings with state, federal, tribal and independent biologists to help guide recovery planning and policy.

“Our volunteers tackle long hikes and overnights, mosquitoes and equipment malfunctions, and even backcountry skiing to remote sites while packing in stinky carnivore lure,” said Laurel Baum, CWMP coordinator. “They are the absolute heart of the Citizen Wildlife Monitoring Project.”

Volunteers have retrieved photos of wolves, including the first photos of wild wolf pups born in Washington for nearly a century in 2008, as well as Canada lynx, fishers and wolverines. Their wolverine sites are set up to collect valuable genetic information by catching snags of hair and capturing photos of the wolverines’ unique chest markings when the animals reach up for the bait.

Woodland Park Zoo is also studying Washington’s wolverines in collaboration with the U.S. Forest Service, the Washington Department of Fish and Wildlife, North Cascades National Park and others. Robert Long, a senior conservation scientist at the zoo, has been conducting this research, dubbed the “Washington Wolverine Project,” since he started working at the zoo 6 years ago.

Wolverines are tenacious carnivores that are making a comeback in Washington. In the early 1900s, they were victims of trapping and poison meant for other animals, and they no longer inhabit a majority of their historical range. Today, most wolverines in the state live in the Cascades.

Just like Roger and Laurel, Robert hikes to remote areas and sets up cameras. Wolverines are especially shy of humans and live in extremely remote, high-elevation rugged areas. Constantly trekking out to those sites and refreshing the bait can be exhausting.

That’s why Robert uses a special dispenser device made to release sufficient amounts of bait throughout the winter — so that trips to the wilderness don’t have to be made as frequently. And when he does go to retrieve SD cards from the cameras, the photos help him and his team learn about where wildlife are traveling, whether their population is recovering or not and how they respond to threats like climate change and alterations to the landscape from human development and wildfires. Human presence can disturb wolverines, too.

“We want to encourage people to get out into nature. That’s a good thing,” Robert said. “But we should take it upon ourselves to be minimally impactful on the backcountry.” 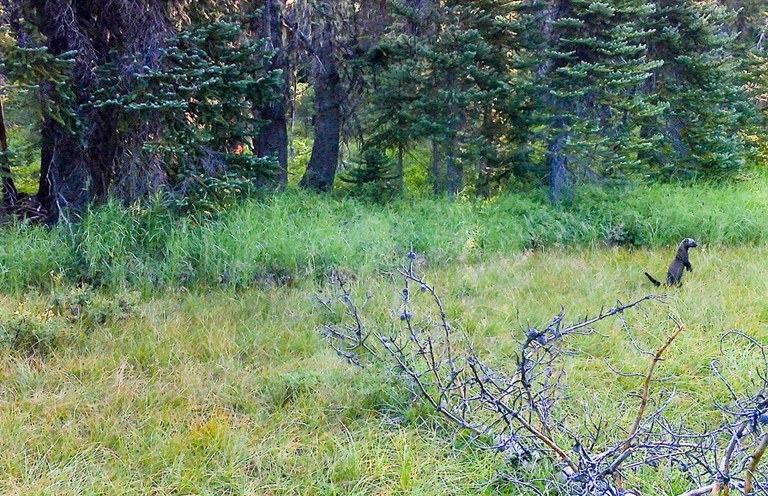 By practicing Leave No Trace principles and being aware of the potential impact certain behaviors might have on animals, people and elusive wildlife can coexist. And if you’re lucky enough to spot wildlife tracks during the winter, Robert suggests backtracking, rather than following the animals, which could push them into places they don’t want to be or cause them unnecessary stress.

Work on wildlife is also important in areas closer to cities. Recently, Woodland Park Zoo initiated the Seattle Urban Carnivore Project, an effort to collect information and do hands-on community outreach about coexisting with wildlife. There are trail cameras set up in 30 Seattle city parks, and with help from volunteers, Robert and his team are beginning to understand the relationship between people and urban carnivores like coyotes and cougars.

“Organizations and agencies in this region are doing a really good job working with each other to monitor and better understand species in an area that’s difficult to understand,” Robert said. “It’s unique that state, federal and nonprofit groups can communicate and collaborate on these efforts.”

Despite all the partnerships and research that go into conserving our native species, outdoor enthusiasts may see wild animals on trail only a handful of times. And that’s part of what makes being in the outdoors such an amazing experience.

“It’s special just to know we have such wild places where these animals can survive. Just to know they’re there, even if you don’t see them,” Roger said. “There’s something sort of mysterious about it.”

Keiko Betcher works at Conservation Northwest, a nonprofit organization that protects, connects and restores wildlands and wildlife in Washington and British Columbia. She’s fascinated by absolutely everything and loves to use storytelling to share what she learns with others. You might (literally) bump into her on trail while she’s investigating a strange-looking mushroom.

How to get involved

Want to get involved in wildlife monitoring efforts?