From the Olympic Coast to the Idaho border, from Bellingham to Vancouver, WTA volunteers completed a record amount of trail work in 2015. These projects showcase how WTA volunteers worked to preserve and expand hiking opportunities across the state this year in partnership with federal, state and local land managers.

As the nation’s spotlight shines brighter on the Pacific Crest Trail, maintenance by WTA volunteers is increasingly vital to its northernmost reaches. This summer, WTA volunteer crews spent more than 40 days on the trail in the Glacier Peak Wilderness, as well as near Snoqualmie Pass and Stevens Pass. 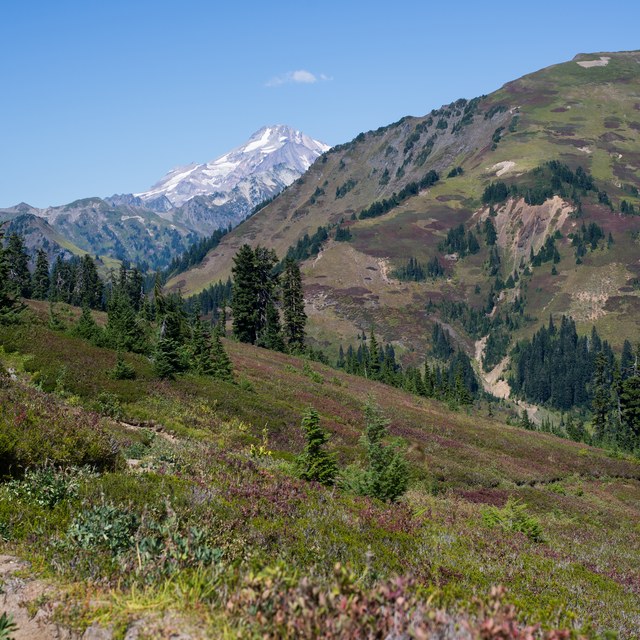 Volunteers removed fallen trees and overgrown vegetation, repaired damaged tread and built wood and rock structures to improve safety for everyone who uses the trail.

A youth volunteer vacation works on the PCT near Indian Pass. Photo by Erik Haugen-Goodman.

One hard-working crew of high school volunteers tended to a remote, long-neglected stretch north of Indian Pass. The 12-day wilderness experience inspired the teens to dream about returning someday as PCT thru-hikers. Their work wouldn’t have been successful without the coordination and support of WTA partners, including the Pacific Crest Trail Association, Back Country Horsemen of Washington and the US Forest Service.

As one of Washington’s most-loved trails, the Wonderland needs lots of maintenance. Luckily, our superstar crew leader Jen Haas (with the help of some top-drawer assistant crew leader sidekicks) led more than 40 work parties on it this year, from day trips working near Summerland to two multi-day Backcountry Response Team trips at Emerald Ridge.

Whether they were helping Mount Rainier National Park with tread repair in the backcountry or working closer to the trailhead, volunteers were instrumental (as they are every year) in keeping Washington’s most iconic trail safe and hikeable.

Back From the Brink

WTA volunteers made the most of the first summer following the reopening of the Suiattle River Road after 11 years of closure. Crews devoted 41 days and 3,750 hours to help the Darrington Ranger District improve conditions on several trails on the western side of Glacier Peak Wilderness. 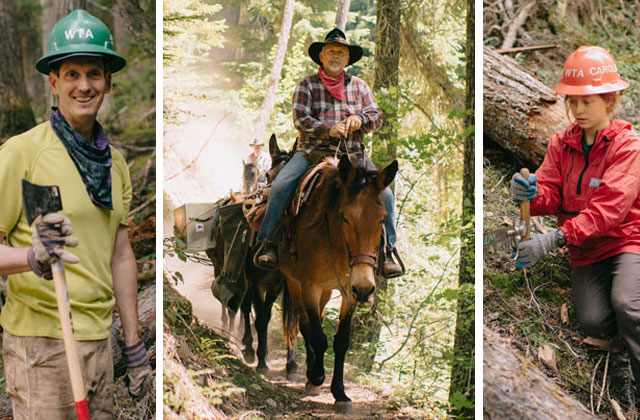 If you explore the Suiattle River, Miners Ridge and Downey Creek Trails, or head northbound on the Pacific Crest Trail, you’ll benefit from their hard work of clearing downed trees, cutting back brush and restoring tread that had been neglected for many years.

Generous volunteers from Back Country Horsemen of Washington helped lighten the load by packing tools and supplies in and out for multiple volunteer vacations.

A few months and three Backcountry Response Team trips later, WTA had cleared more than 200 fallen logs from a 1.5-mile stretch using crosscut saws, restoring access to hikers once again. More work remains as the trail continues to be impacted by the 2011 fire. Fortunately, our volunteers have been a presence on this trail for many years, are ready to return as long as they are needed.

We even fielded our latest Backcountry Response Team trip ever this year, when a group of intrepid volunteers headed out for a rather soggy four-day trip in November to clear 80 more trees that came down in a late autumn storm.

In June, the new WTA-built Margaret’s Way Trail opened to the public—and it’s already a hit with hikers. Located in the heart of the Issaquah Alps on the westside of Squak Mountain, this area was nearly lost to logging and development until the Issaquah Alps Trails Club rallied the community to protect it. King County purchased the land in 2014 with help from The Trust for Public Land, clearing the way for WTA to begin work on the new trail, which connects with the existing Squak Mountain trail system.

WTA volunteers completed the majority of construction work leading up to the grand opening, investing more than 7,500 hours into the project. This major undertaking couldn’t have happened without youth volunteers from the Student Conservation Association and local school and community groups, as well as funding and hands-on support from REI.

This Spokane County park on the eastern border of Washington state is a popular location for residents of Spokane and Coeur d’Alene alike. For more than 30 days this year, WTA volunteers helped improve a section of trail that accesses a stand of old-growth cedar and a striking year-round waterfall.

School groups giving their time to this local favorite include students in Gonzaga University’s Volunteer Corps and the school’s environmental studies program.

Youth and adults worked tirelessly on the Mountain Lake Trail on Orcas Island this year. An adult Volunteer Vacation spent a week laying the groundwork for 24 kids from Bellingham’s Explorations Academy to work on tread repair here for three days in late April.

Then, in July, 12 high school volunteers from across Western Washington spent a week improving drainage and tread, as well as repairing bridges. The season was capped off with two adult Volunteer Vacations that continued to repair the trail tread so hikers’ feet will stay dry during the winter months.

A family favorite accessed by hundreds of people year-round, Franklin Falls is a trail the Snoqualmie Ranger District asks WTA to return to year after year. This year, more than 360 volunteers completed heroic feats of strength, moving mountains of rock and huge logs to reroute the trail; they also built new footbridges and three new viewpoints on this popular I-90 corridor path.

Thank you to everyone who volunteered with WTA in 2015, from urban areas to remote wilderness and to the members and funders whose financial support helped make this work possible.