Sno-Parks Permit
Saved to
My Backpack

0 Trip Reports for this trail, below

If you only have a single day and really want to push yourself, then check out this winter route to Indian Racetrack, in the Indian Heaven Wilderness.

From McClellan sno-park, hike on the 3053 Road toward the McClellan Meadows trail. Trail conditions for the first mile of Road 3053 are groomed, but the rest is typically un-groomed. Once you reach Trail 157, continue southeast. Signage and blue diamonds marking the trail is sparse at best. But the trail follows the route of George McClellan's 1852 railroad survey, which provides a navigable and moderate grade. Popular in the summer months for mountain biking, the trail corridor should be easily discernible as you trudge ever closer to Indian Racetrack.

The trail begins to undulate as it climbs up through silver fir, western white pine, and Engelmann spruce. The trail continues to rise until after 2.1 miles you will finally drop down into a large open meadow. Pause here and reflect upon the echoes of history. Once known as 'Sahalee Tyee', the area is culturally important to many different Native American tribes. Over the past 9,000 years the Yakima, Klickitat, and Umatilla tribes -just to name a few- gathered here for berry picking, hunting, and fishing. Indian Racetrack is named after a long field where horse racing once provided reprieve from the harvest, and likely, much needed entertainment.

If you find yourself wallowing in the splendor of this ancient relic, consider climbing further up the 171 trail to Red Mountain Fire Lookout. Less than a mile to the top, this steep trail will lead you to one of the most coveted views of a snow covered Gifford Pinchot National Forest. A sight few, if any eyes, will gaze upon this winter.

WTA Pro Tip: Stop into Backwoods Brewing in Carson after tackling this trek. You'll have earned it. Also consider booking a night at Carson Hot Springs Golf and Spa Resort. After a long cold hike, take a load off by climbing into your own personal hot tub. With mineral water pumped from an underground stream you will have no cause to move a muscle as you rest your aching bones. 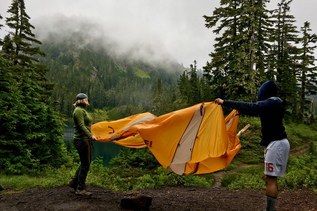 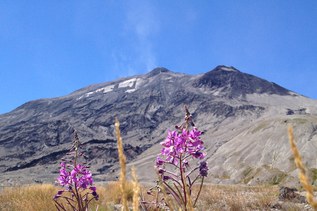