Skip to content
Tieton Meadows, Bear Creek Mountain Bear Creek Mountain is supposed to be accessible from three different trailheads; the Tieton Meadows Trail at the end of the North Fork Tieton Road, Conrad Meadows, and Section 3 Lake. After our ... https://www.wta.org/go-hiking/trip-reports/trip_report.2018-07-09.6831584091 https://www.wta.org/site_images/trip-reports/2018/tripreport.image.2018-07-09.9152091601/@@download/image/Trying to find BCM from NFT.JPG

The "trail" on the other side of North Fork Tieton. I think. Photo by Anna Roth. 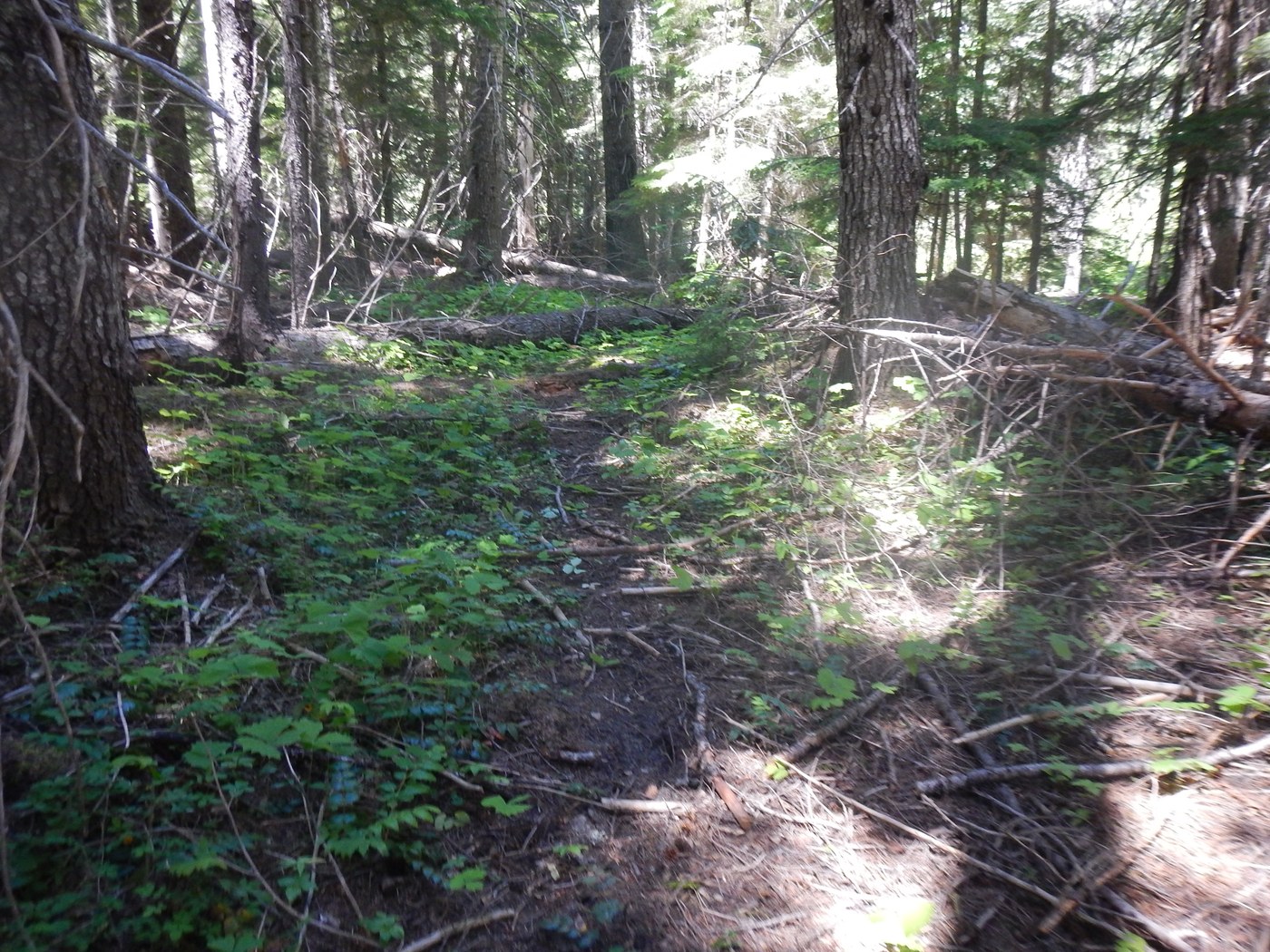 Bear Creek Mountain is supposed to be accessible from three different trailheads; the Tieton Meadows Trail at the end of the North Fork Tieton Road, Conrad Meadows, and Section 3 Lake. After our visit, I can say unless you love routefinding and bushwhacking for 7 grueling miles, the Tieton Meadows access is basically lost. And, since the South Fork Tieton Road is still closed because of a washout, Section 3 Lake TH is the way to go. That’s the short version. For the play-by-play, read on.

My colleague and I planned to do this hike from the North Fork Tieton Trailhead, because that road was clear and I wasn’t sure the Section 3 Lake road was passable yet. We started at the brisk hour of high noon, relying on late summer sunlight to help us finish. We both had to drive from the Puget Sound area to get to the trailhead, hence the late start.

Feeling sturdy and full of hope, we set off. Less than 0.3 miles in, the trail crosses the North Fork Tieton River, requiring a ford. So, shoes off, walkwalkwalk (regret leaving Tevas in car), get on other side. Once across, we tried to pick the trail back up. We found one promising route, but it led us in the opposite direction from where we needed to go. After checking the map, we headed upstream a bit, hoping to run into something obvious.

No luck. The only thing that seemed like it might be trail was an overgrown section right above the riverbank, just around the bend from where we’d crossed. It looked like trail that had partially washed out, but we followed it for a while until we were pretty deep into the woods and it became obvious it was a game trail.

At this point, we’d spent almost 40 minutes brushbashing, and even if we found the trail, we were an hour behind schedule. Looking at the map, we saw the trail leaving from Section 3 Lake TH is just 7 miles roundtrip – totally doable even with a really late start. So we gave up on BCM from the North Fork Tieton and headed to Section 3 Lake.

Aside from the last 2 miles of the road (which most definitely need a high clearance car), Section 3 Lake is 1000% better than the North Fork access. The trail is extremely scenic, taking you through alpine forest for only about 0.75 miles before breaking out into an expansive alpine meadow full of lovely flowers, where you can see your destination. Of course, the summit is 7337 feet, and that meadow is right around 6300 feet. And the trail to the top of BCM is only 0.9 miles. Which means it's more than 1000 feet in less than a mile. I had to stop and catch my breath a lot.

There are a few snow patches along the trail. On the trail to the summit, there’s still a fair amount of snow left to cross, but it’s never too hard to see where the trail goes. However, just before coming out onto the shoulder below the summit, there's still a pretty dicey patch of snow we weren’t thrilled about having to cross. So we climbed up the rocks alongside it, then edged along the top of it, where there was a path of dry rock.

On the way up, we had one exciting moment where the ground I was on slipped out from under us and started flowing like mud, because of how much melted snow had soaked the dust beneath it. Nothing bad happened, but it was creepy to watch – like the beginning of a landslide.

This route meant we missed the trail from the shoulder to the top, so we walked cross-country to the summit, which is totally stellar. The Goat Rocks are RIGHT THERE, and there were some friendly ladybugs too. We had some fun with the map trying to figure out what was what, and a nice guy at the top chatted with us for a while before heading back to where he was set up. We mentioned we had tried to come up from North Fork Tieton and he kind of laughed and said, “That way is um…hard.” It was a relief to know that other people had had a hard time finding it.

On the way down we followed the trail down from the summit, and ended up having to kick step across that big snow patch we'd avoided on the way up, which was really not fun – it’s got a steep angle and the runout is into a patch of sharp rocks. We took it slow. I slipped a few times, but thankfully we got across unscathed. I’m not sure that patch ever fully melts out, so plan on having microspikes or at least poles. Poles especially would have really helped.

The rest of the way down was uneventful, except that we did find where the Tieton Meadows Trail meets up with the Bear Creek Mountain trail, and it’s in awful shape. Once again, we felt gratified that it actually was a really hard to follow trail, and the problem wasn’t with our navigation skills.

We finished our day with ice creams at the Clear Lake store. They’ve got quite a selection – a good place to stop coming back from a long day in the mountains.

Happy to be at the top! Photo by Rachel Wendling. 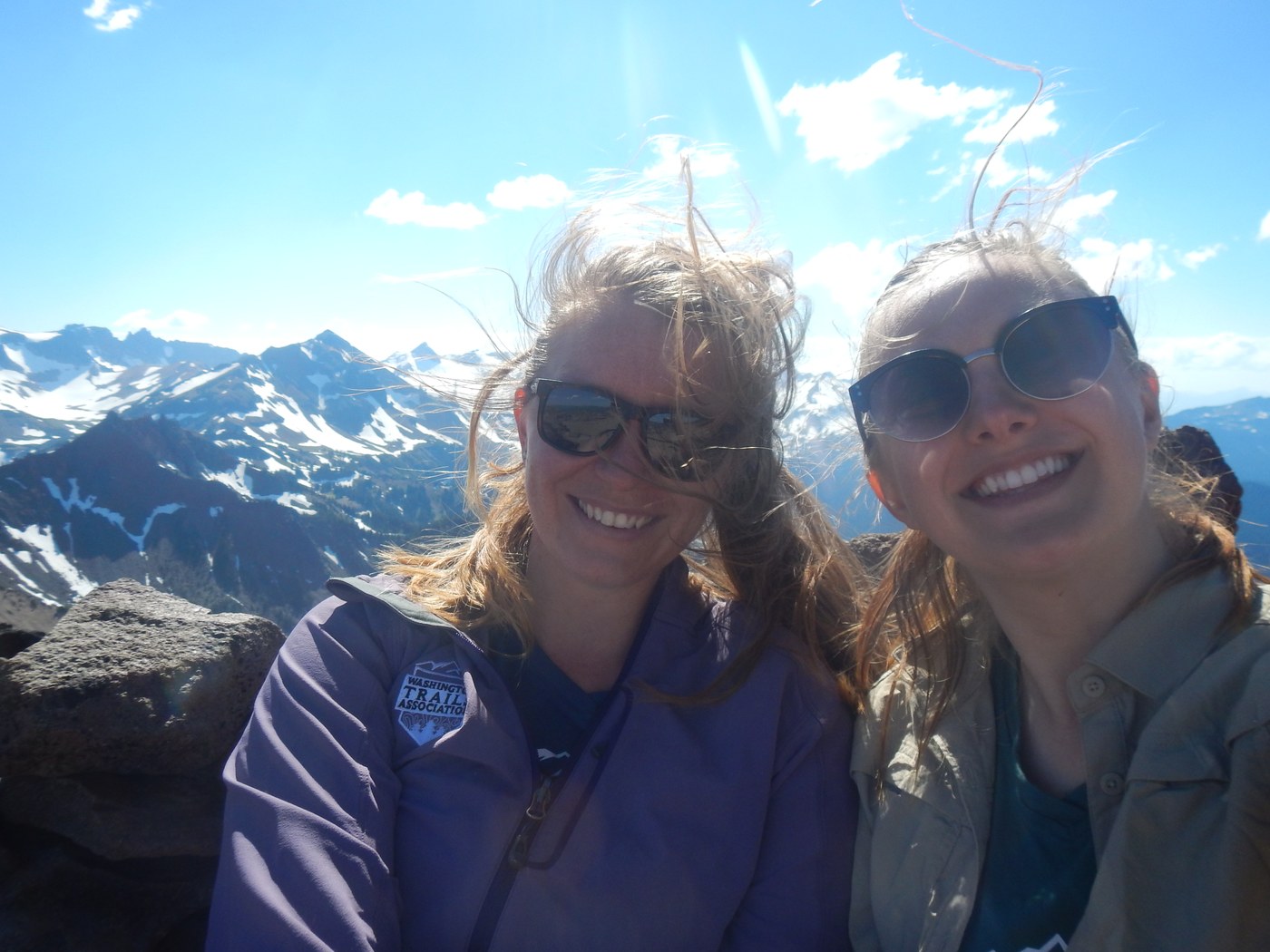 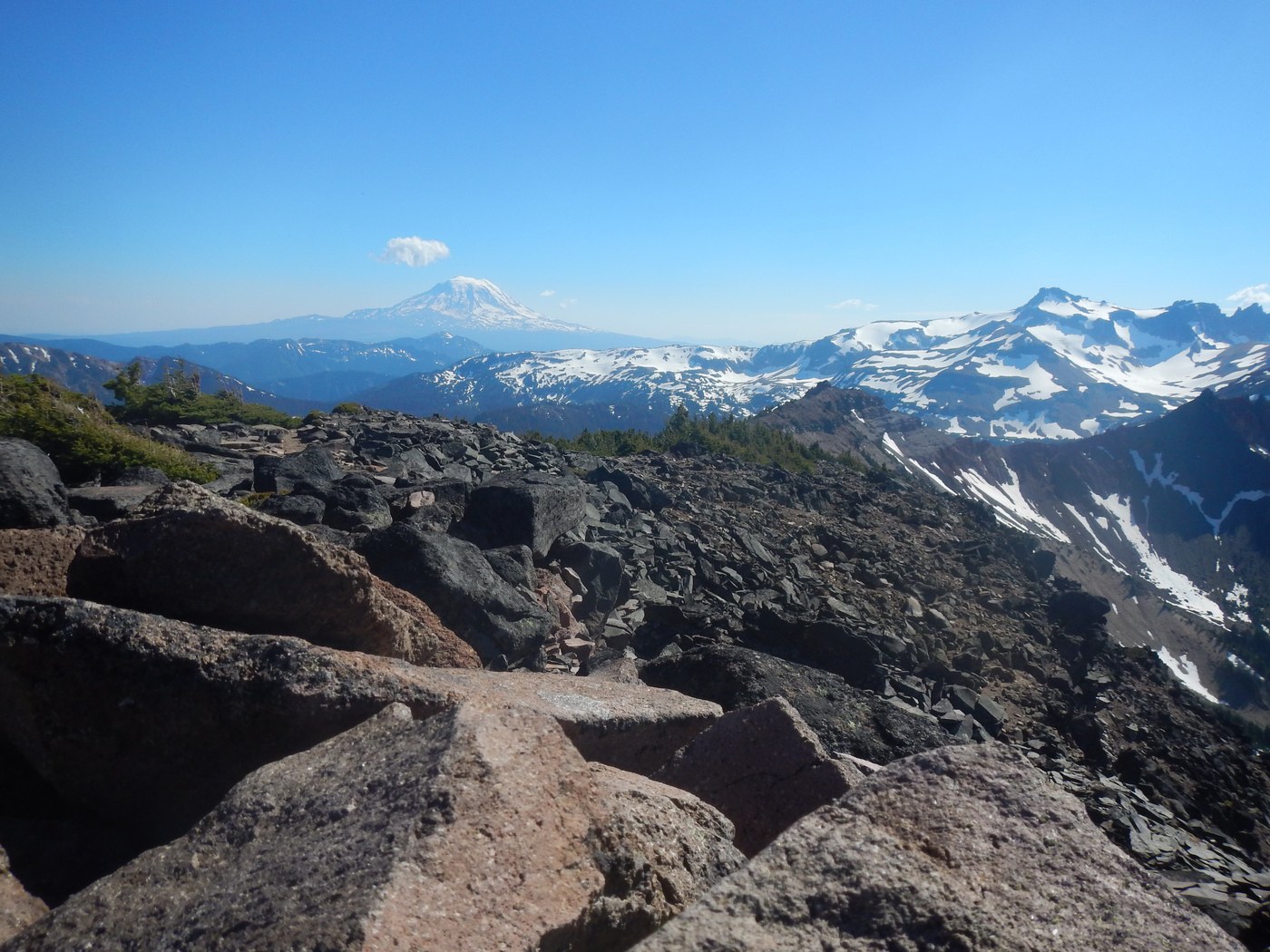 The Tieton Meadows trail where it connects with the Section 3 Lake access. Photo by Anna Roth. 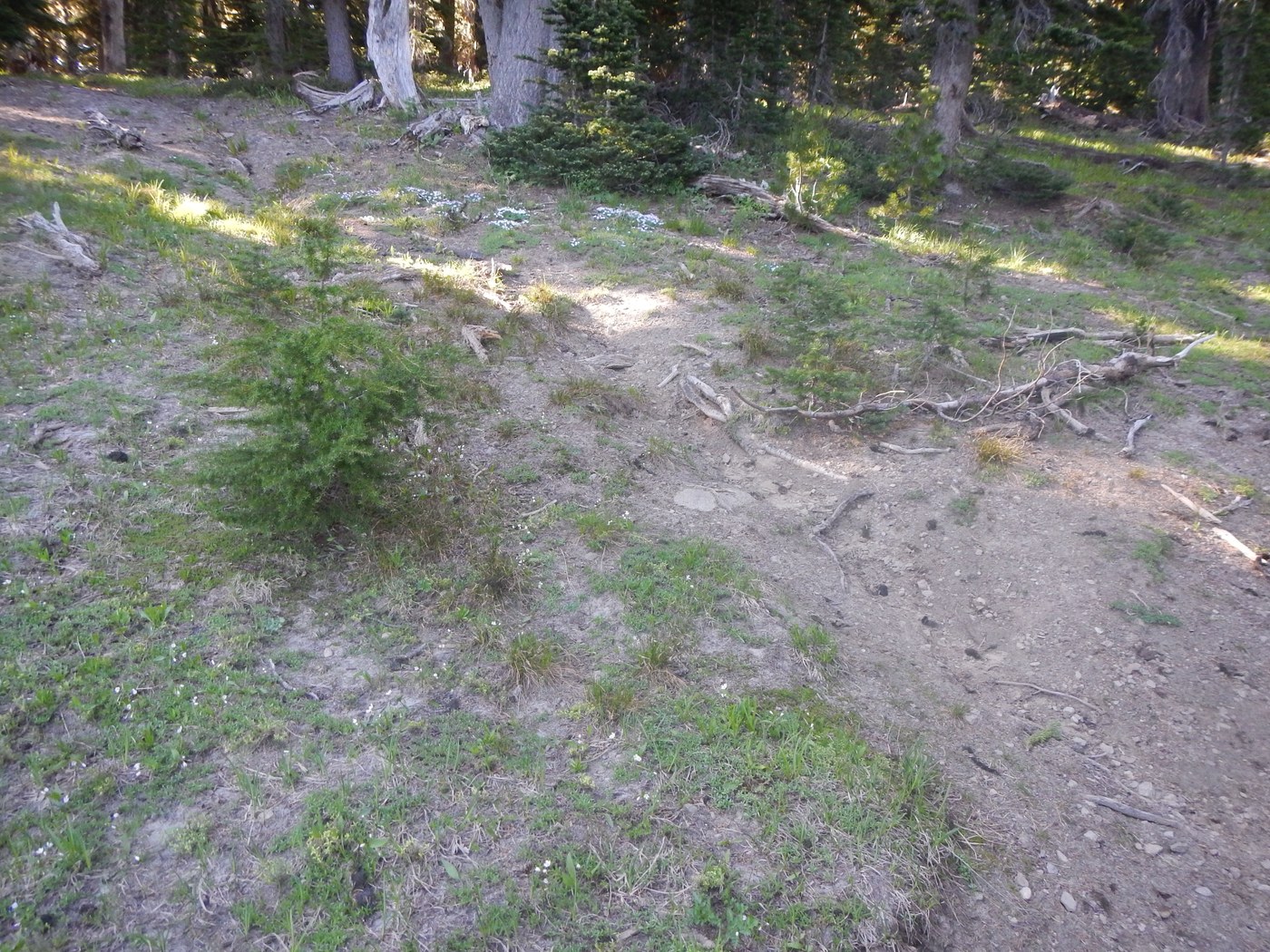 I have been watching for your reports! :)! Bob and I did Bear Creek Mountain a few times in the 90's from the Conrad Meadows TH. I remember how beautiful the flowers were and how awesome the view of the "up close and personal" Goat Rocks was! Your report makes me want to go back!

Oh my goodness, it was SO pretty. And while the summit was very nice, even hanging out at the junction before the really steep part would have been OK -- you have such a nice view of the William O. Douglas Wilderness and the east Cascades from there.

Thanks for looking for my reports. I have a couple more coming. :)

Dang you did the Hidden Springs Loop AND Bear Creek Mountain?? Wow! I see the Tieton Meadows route up, but it does look super steep...and it sounds like it's disappeared from lack of access. Ummm...once up at Bear Creek Summit, can one keep going along the ridge of the Goat Rocks to other peaks?

Hahahah, well we did *not* do BCM from the North Fork road -- it was way too hard to follow. We ended up driving around to Section 3 Lake TH. I would not go from BCM summit into other peaks, it's just way too much elevation gain and navigation I wouldn't feel comfortable doing. You may be able to do it, but I didn't look at possible routes because it's not something I even thought about!

I'm surprised by all the hikes you did in this area in a few days: Tieton Pass, Shoe Lake & Bear Creek Mtn! Very cool. :) And yeah, i'm just curious about BCM. Looking for possible hikes to try this weekend. So I've been watching your posts. :)

Well, you've already been to most of them! Shoe Lake was pretty but that snow traverse on the backside of the pass was dicey. I went to Walupt Lake on Sunday which was OK, but the bugs were pretty bad. It's gonna be hot this weekend, so somewhere shady near water would be my recommendation. Maybe on the west side of the passes?