This is right after I asked her to marry me..:) 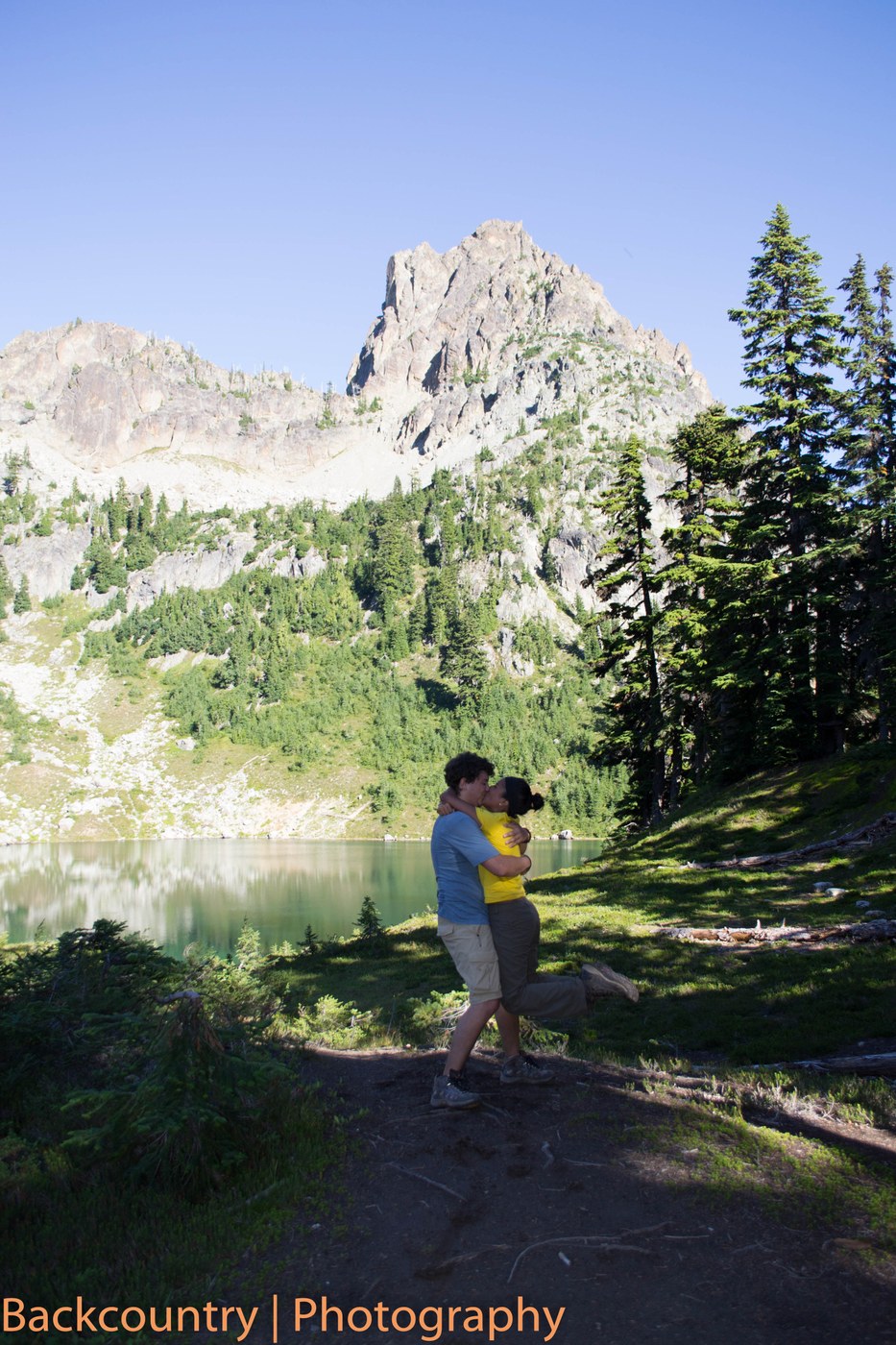 This was it, this was the best weekend in the outdoors that I have ever spent in my entire life. I don't know what I did to deserve this weekend, but thank god for it. It's hard to explain, but you'll understand here shortly. Left Seattle at around 0800 (didn't bode well with me as I wanted to leave way earlier) and got to the FS road around 1030. Now the road is about 15 miles long, but the problem is the potholes and the washboards that you have to watch out for, which means it takes another hour to get to the TH because you're only going about 15 mph. Also there is a creek that you have to ford in your rig, our little Subaru Impreza hatchback did it just fine, water just barely covers the exhaust pipe up. Got to the TH at about 1130-1145 and headed out, you cross a bridge immediately and then start a slow climb up into some switchbacks for about the first 3-ish miles, eventually topping out and coming across Squaw Lake. My girlfriend and I decided this was a good place for a powerbar and a break, so we dumped the packs and sat down for 10-15 mins to just soak in the relaxation. The trout were active that day and you could see them everywhere. The coolest part of this break was when the butterfly landed on my girlfriends knee, she had never had that happen and to see the look of enjoyment on her face was priceless, it was a really awesome nature moment that I'll never forget. Anyhow, we loaded up and headed out, now just a warning to those who haven't hiked this trail before, this is where the real hiking starts. The switchbacks become more frequent the grade of the trail increases and you start huffing that's for sure. Eventually you get a small break and get to walk through a really awesome meadow for a half mile or so (i bet its even better in June right after the flowers start blooming). At the back end you get some pretty wicked awesome views of Cathedral Rock (which has been hiding since the parking lot) and you'll meet up with the PCT for a short while. You go up just a smidgen more and you'll come across a network of trails...they all go to the right, so just bear right and you'll be fine. Now you'll walk for another 100 yards or so coming down from Cathedral Pass and there is one more split, the left goes to Deep Lake the right goes to Peggy's Pond. Our destination was Peggy's Pond so that's the way we went, now just a warning the trail is haphazardly sketched out of a scree slope and rock, there are a few SAD sections (slip and die) but so long as you just lean into the rock and make sure of your footing you'll be fine, also there's like two spots where you can lose the trial for a second, to remedy this just look out for the cairns, they led us the right way while the couple ahead of us got stuck and had to turn around to get back to the trail. This whole time you spend basically billy-goating your way across the back end of the Rock you're treated with one of the most breathtaking views of Deep Lake and Mt. Daniel and just a valley floor you'll ever see. Finally you round it out and head about 200 yards STRAIGHT UP no switchbacks, up the hill. Right when you think you're going to die, the pond pops out and you're sitting in a high saddle with sky blue clear water and just stunning views all around. This is where my favorite part came into play. We picked out a spot to set up camp on the back end away from the shoreline tucked into this little tree cove beside the trail. After dumping my pack and helping my girlfriend with hers, I set up the tripod and camera and asked her to go stand in front of the Pond and Cathedral Rock so I could take a picture of us. What she didn't know is that I set the camera up to record, and then I proceeded to ask for her hand in marriage in which SHE SAID YES!!! After much confusion from the exhaustion and a few tears from her, she finally got it to sink in that we were now engaged and we spent our first night as an engaged couple under the stars. It was a picture perfect night, the moon was full and there weren't any clouds, the temperature was a perfect 70 degrees..It was everything and more. BEST WEEKEND OF MY LIFE! Haha....I'm pretty sure it was the best weekend of hers too, at least I hope!
On the way back down on the backside of Cathedral Rock, Deep Lake is in the background 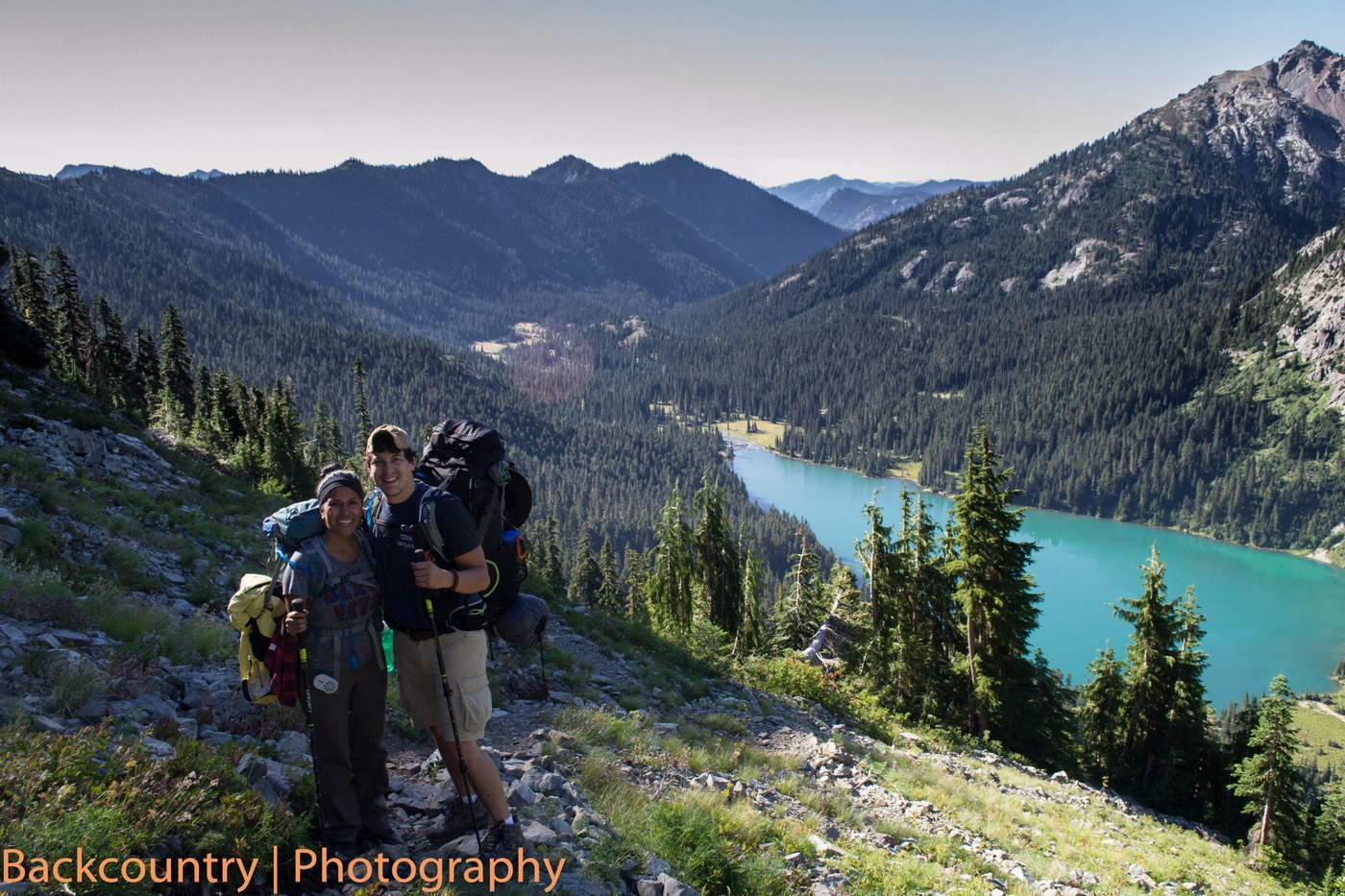 The butterfly that landed on her knee at Squaw Lake 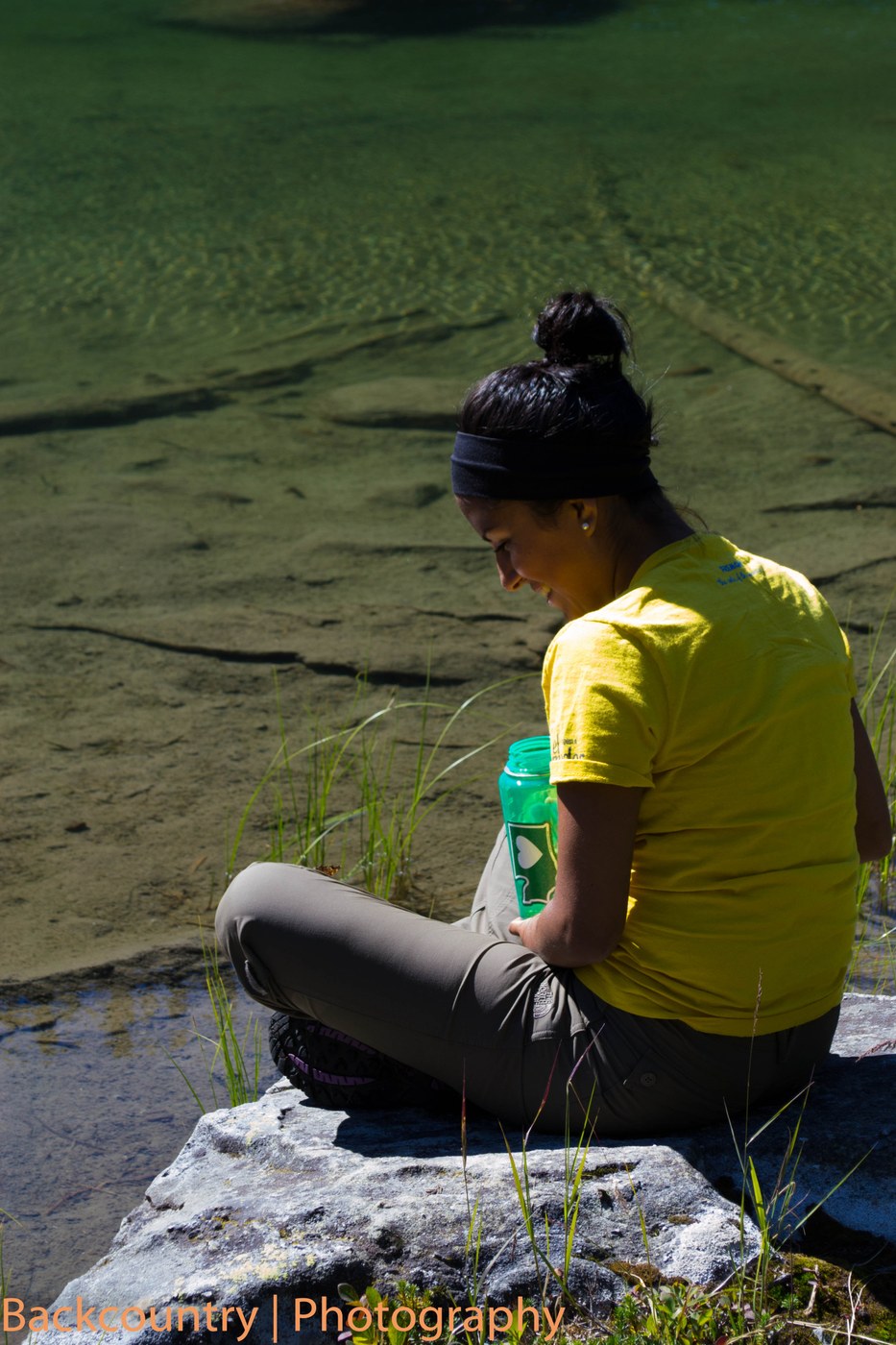 Sketchy part with the SAD sections (slip and die) Mt. Daniel behind the other peak. 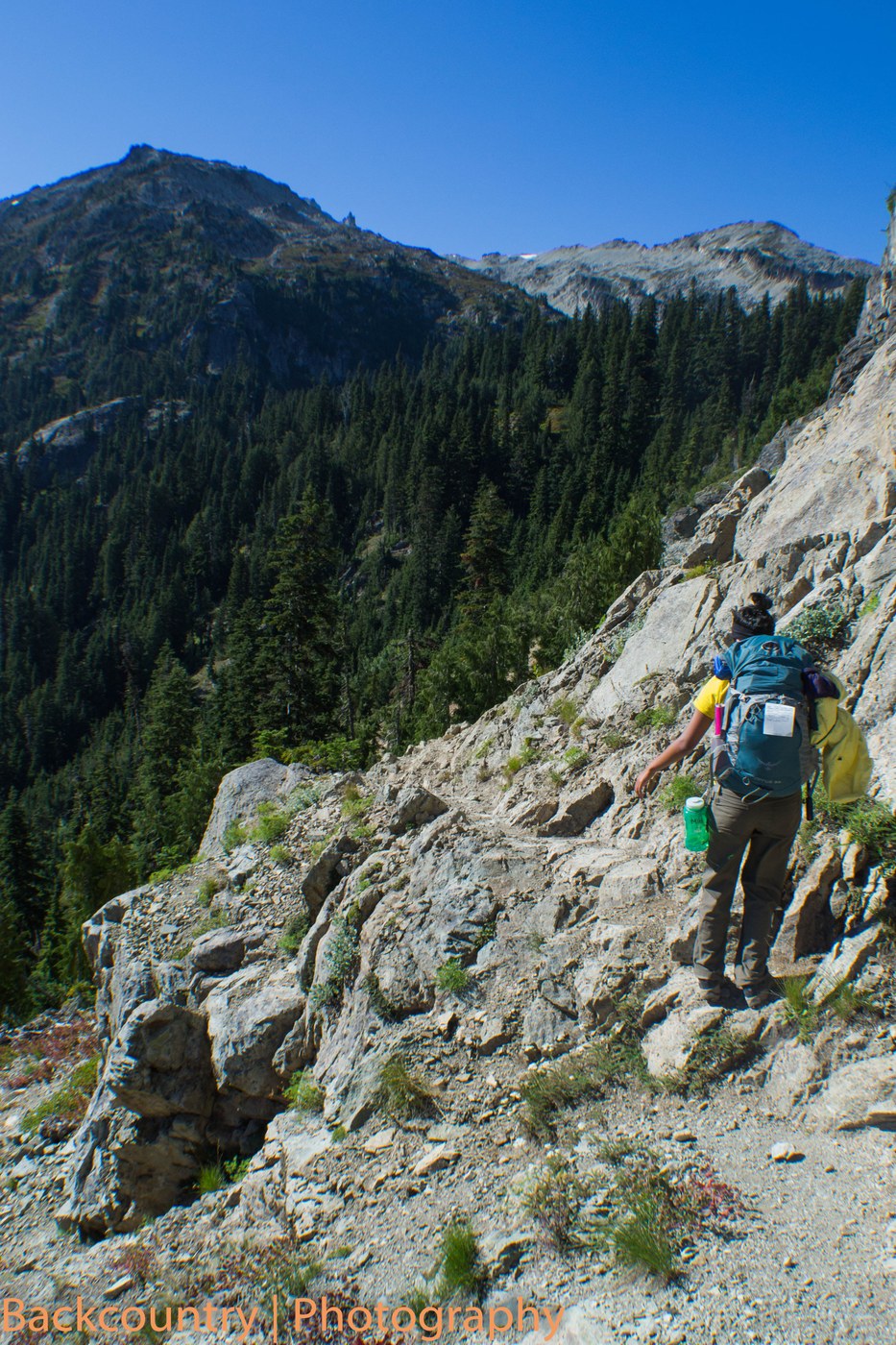