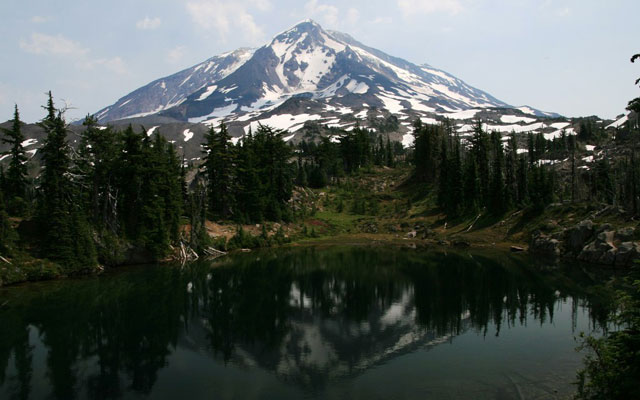 A view of Mount Adams from the Riley Camp trail, accessible via Forest Service Rd 23. Photo by BeaverDawg.

After several public meetings earlier this year, the Forest Service recently released its draft Travel Analysis Process (TAP) for Gifford Pinchot National Forest, but the plan did not address many hiker concerns.

As the voice for hikers in Washington state, WTA's interest isn't limited to developing and maintaining trails, but also in the road system that provides access to those trails they lead to. Without a well-maintained road system, hikers and other trail users could lose access to the places they love in this scenic recreation corridor between Mount Rainier and the Columbia River Gorge.

A key recommendation in the plan would keep many roads accessing trails at Maintenance Level 2 - High Clearance Vehicles. This means that those roads will be maintained, but only to the level to make them appropriate for high clearance vehicles likshe SUVs and are not suitable for passenger cars.

During the public comment period in 2014, WTA communicated concern over declining roads access to popular trailheads including the gravel road (FR 4109) to the Silver Star Trail where travelers needed a high clearance vehicle to reach the parking area.

Hikers and other recreation users have consistently asked for imrpoved access to the Gifford Pinchot National Forest. The TAP does not reflect this growing demand as Washington's population expands and more people seek solace outdoors.

Reduced access to roads leading to trails also means reduced visits to the trails. If few hikers are using a trail, it will not be a priority for maintenance and, over time, trails will be lost. This will put increased pressure on a limited number of roads and trails.

Increased use on fewer roads and trails could create new maintenance costs and endanger water quality due to increased erosion.

Next steps for forest roads

The proposal does not represent the final plan. WTA and other user groups like the Gifford Pinchot Task Force have asked the Forest Service to consider recreation concerns in the final plan. The final plan is expected to be released later this year.

What can your members do to help ensure easy access to forest trails? Do we really want to encourage people to buy large, high clearance vehicles in order to continue having access to the woods? It seems as though the forest service would want to encourage the use of more fuel efficient vehicles.

Thanks for your thoughtful comment! Unfortunately, this is a complicated issue with limited actions to take right now. You can join our Trail Action Network under the Take Action tab to keep updated on new actions. Contacting the Forest Service with your thoughts can also have a powerful impact. And road maintenance is tied to forest funding, so you can always contact your Congress people to let them know you want to see robust funding for our public lands.

Let us know if you have any other questions!

Many hikers can not afford a pickup or SUV in addition to a small, fuel efficient road car. So this proposed policy amounts to discrimination against less affluent hikers (and those who are more environmentally conscious) - part of the extreme escalation of income and wealth inequality that is so damaging our economy and our democracy.