Skip to content
Good News for Pacific Crest Trail in Washington New protected views from the PCT, and a call to clear the way from Canada for southbound hikers. https://www.wta.org/news/signpost/good-news-for-pacific-crest-trail-in-washington https://www.wta.org/news/signpost/good-news-for-pacific-crest-trail-in-washington/@@download/image/913f97ca-404f-4745-8560-c89d79787459.jpg

New protected views from the PCT, and a call to clear the way from Canada for southbound hikers.

Protecting the views and ecosystems south of Snoqualmie

A view of the Pacific Crest Trail, south of Snoqualmie Pass. Photo by Sir-Hikes-a-Lot

Last week, The Nature Conservancy announced the sale of 1,164 acres to the Forest Service, to be managed as part of the Okanogan-Wenatchee National Forest.

The two sections that made up the sale are within a half mile of the Pacific Crest Trail, are visible from the trail, and have long been part of the vision for protecting the trail and the experience of hiking it. In addition, they encompass the headwaters of Cabin Creek, an important tributary to the Yakima River and habitat for salmon, steelhead and bull trout.

The $1.1 million purchase will be funded from a special Land and Water Conservation Fund program to protect the Pacific Crest Trail.

These sections are within an area designated by the Forest Service as the Snoqualmie Pass Adaptive Management Area, where ecological and economic factors are considered, while managing for high quality forest habitat and habitat connectivity along the Cascade Range.

“This important acquisition connects gaps in National Forest surrounding the Pacific Crest Trail and the headwaters of Cabin Creek,” said Mike Williams, Forest Supervisor of the Okanogan-Wenatchee National Forest. "It enhances the recreational access and scenic quality of the trail experience.  Additionally, the acquisition increases our ability to continue restoration efforts in the Yakima Basin." 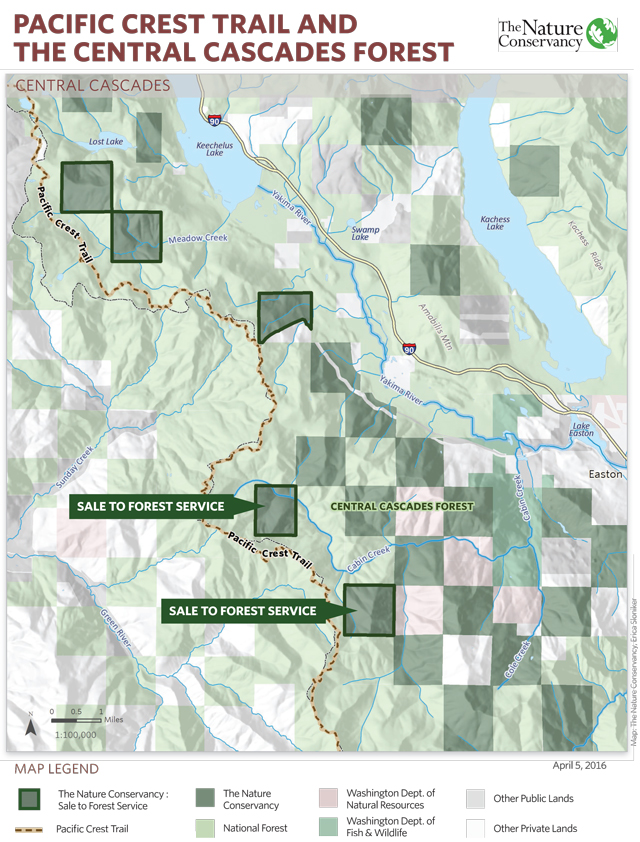 “This is a win for the land and the people who love it, and assures long term conservation protection and public access for these sections of forest,” said Mike Stevens, the Washington state director of The Nature Conservancy. 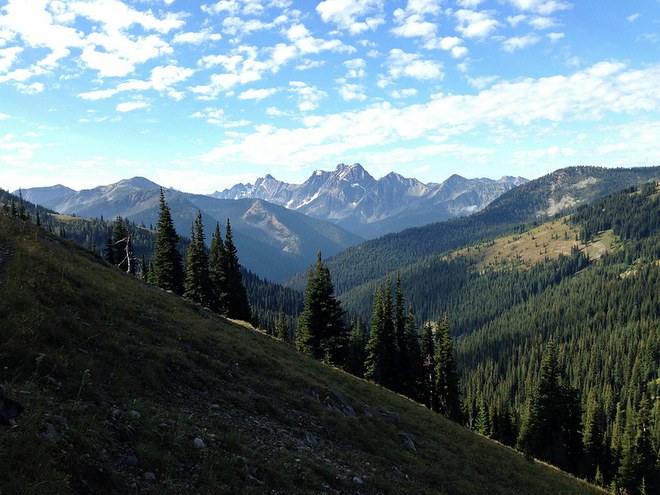 Views from the stretch of the Pacific Crest Trail between Hart's Pass and the Canadian border. Photo by Loren Drummond.

“Unfortunately, hikers seeking to traverse the PCT from its northern most point on the Canadian side of the border are unable to legally do so because there is not currently a U.S. Port of Entry there,” DelBene wrote. “We ask for your swift attention in rectifying this obstacle to fully enjoying one of our country’s most treasured scenic trails.”

Hikers seeking to start the PCT from the Canadian side of the border are unable to legally do so because there is not currently a U.S. Port of Entry. Hikers have been warned of fines as high as $10,000 and a potential criminal penalty of up to one year in prison for crossing.

Northbound hikers can legally cross the border by obtaining an approved Application for Entry into Canada via the PCT from the Canada Border Services Agency. (Some hikers choose to repeat the final 30-mile section and return to Hart's Pass.)

DelBene’s letter, which was signed by 20 House members, asked for a similar arrangement so that hikers can also start the PCT from the north. U.S. Customs and Border Protection maintain a seasonal border station in the National Forest Service Complex in Ely, Minn., creating a precedent for such an ask.

On Wednesday the U.S. Senate passed legislation that would permanently reauthorize the above mentioned Land and Water Conservation Fund that paid for the land. First passed in 1964, LWCF has been absolutely critical to the conservation of America's public lands.

LWCF funds have protected lands that surround the Appalachian Trail, the Pacific Crest Trail, and many trails in between. Yet, as most of your are quite aware, many of these trails remain incomplete or must traverse private lands or sometimes even be routed onto busy roads.

While this was a tremendous victory for LWCF, the energy bill of which this was a part, must still be reconciled with the House's energy bill. WTA along with the American Hiking Society will be encouraging all Members of Congress to work towards a successful effort that would permanently reauthorize the Land and Water Conservation Fund in law this year.