Skip to content
link
Greenway Seeks National Heritage Area Status The Mountains to Sound Greenway Trust is leading a bipartisan campaign to have the U.S. Congress designate the Mountains to Sound Greenway as a national heritage area. Learn more about how to help. https://www.wta.org/news/signpost/greenway-seeks-national-heritage-area-status https://www.wta.org/news/signpost/greenway-seeks-national-heritage-area-status/@@download/image/esmerelda-basin-explorer-dogs.jpg

The Mountains to Sound Greenway

Stretching from Puget Sound to Ellensburg, the Mountains to Sound Greenway is a 1.5 million-acre landscape that has sustained generations through an abundance of natural and recreational resources.

Alpine peaks, wilderness lakes, working farms and lush forests are connected by roads, rails and trails, offering local residents and visitors a place to live, work and play in communities deeply rooted to the land around them.

A national heritage area is a large, lived-in area designated by Congress where natural, cultural, historic and recreational resources combine to form a landscape of national distinction. This designation provides a flexible strategy to encourage residents, government agencies, nonprofit groups and private partners to collaboratively plan and implement projects to preserve a landscape, without affecting private property rights.

Official recognition of the Greenway would:

Washington Trails Association recognizes the value and importance of the Greenway as one of the state's leading outdoor recreation areas, and as a gateway to discovering the wonders of wilderness.

We have joined with more than 65 nonprofit and business organizations who recognize and support national heritage area status.

How to take action

For more information, and how you can share your support for the Mountains to Sound Greenway national heritage area designation, visit greenwayheritage.org. 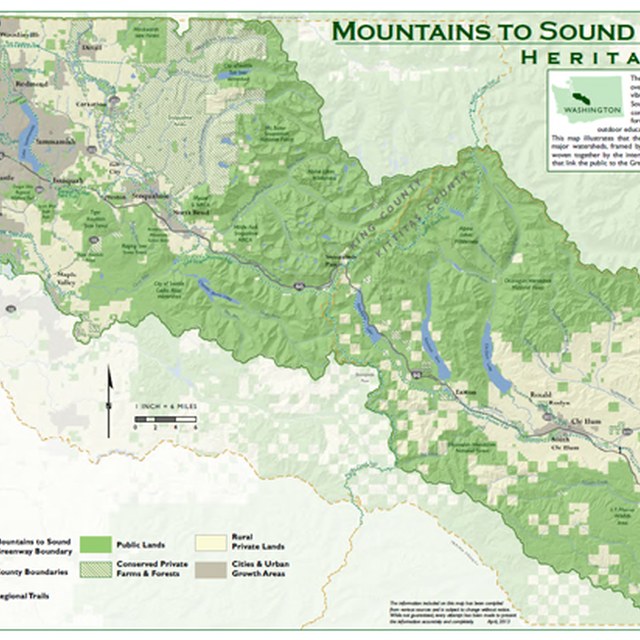 I firmly stand against HR 1785, and you should too, as it is just another way that our government is seeking to control our public lands. You might be blissfully unaware of it now, but if this abomination passes, the true nature of it's purpose will be shown in the days to come. I get really upset when I see stuff like this. The earth has been around for about 4.5 billion years without HR 1785, and it will be around for a few billion more, without ANY help from us!

National Heritage Area designation doesn't add any new government authority. In fact, it actually allows private citizens a greater voice, and can reduce inefficient government land management by setting a table for cooperation between all the stakeholders (including you!).

If you like to hike, you know that you need public forests and a connected trail network. You can't have those two things without conservation of lands (see Greenway work in this arena: http://bit.ly/1aqpieQ) and planning between land managers and trail maintainers (like the Greenway Trust and WTA).

Yes, the earth will be around in another billion years, but if you want your kids to have access to trails and wilderness we have to plan to set aside those special places. The amazing access to outdoor recreation that we have in this region didn't just happen by accident.

Just wondering, have you even read the legislation? It's really straightforward and isn't hiding some government takeover. Check it out if you're interested: http://www.govtrack.us/congress/bills/113/hr1785/text