Skip to content
Hiker + Scrambler: Stronger Skills Over Rock and Snow Any hiker who wants a structured, safe environment to dip their toes into beginner technical skills -- like navigating over ice and snow -- might find a scrambling class a good place to start. Registration closes on some upcoming classes starting Feb. 2. https://www.wta.org/news/signpost/hiker-scrambler-strengthen-your-skills-over-rock-and-snow https://www.wta.org/news/signpost/hiker-scrambler-strengthen-your-skills-over-rock-and-snow/@@download/image/An-always-smiling-scrambler-on-the-summit-of-Rampart-Mountain-photo-by-Dave-Butler-cropped.jpg

Any hiker who wants a structured, safe environment to dip their toes into beginner technical skills -- like navigating over ice and snow -- might find a scrambling class a good place to start. Registration closes on some upcoming classes starting Feb. 2.

Hikers are a lot of things: urban ramblers, naturalists, photographers, trail runners, parents, birders, alpinists, historians, educators, geocachers, scientists. This year, Signpost Blog will take a look into the other passions driving hikers to get out and explore Washington's trails and wild places.

Seeking out skills to explore the high country year-round

When WTA member Jared Pearce first moved to Washington from California, he was already a hiker and backpacker. He found WTA's website and began exploring the trails in his new backyard, finding some glorious spots among the peaks and valleys of the Cascades.

What he didn't expect to find, however, was so much snow. Used to the mountain seasons in California, he found himself frustrated by the shorter backpacking season in Washington's high country. He also noticed that a lot of the trip reports he followed into the shoulder seasons mentioned the use of ice axes.

Pearce realized he needed new skills to stay in the backcountry more months of the year, to explore responsibly off-trail, and to move more safely over snow and rock.

"I wanted to learn how to use an ice axe," Pearce says. And that's when he decided to take a scrambling class with one of WTA's partners, The Mountaineers.

What is alpine scrambling?

Alpine scrambling sits somewhere between hiking and technical mountain climbing. A day of scrambling could include traveling from a trail to a summit, making your way off-trail and up a steep snow slope or rocky knifes-edge ridge.

It doesn't require quite the extensive (and heavy) set of ropes and anchors that climbing does, but it does use a bit of specialized equipment that a traditional backpacker might not have in their gear closet, including a helmet, ice axe, and mountaineering boots (stiffer and stouter than backpacking for stability over loose rock and for kicking steps in snow). Most of the equipment can be rented.

A safer scamper: what can you learn in a scrambling class?

Depending on where you live, you may need to take several classes to build (and practice) your alpine scrambling skills. If, like Pearce, you decide to take a class through the Seattle, Everett, Olympia, Kitsap or Tacoma branches of the Mountaineers, then you'll work your way through a series of lectures, workshops and field trips. The skills you'll cover include: 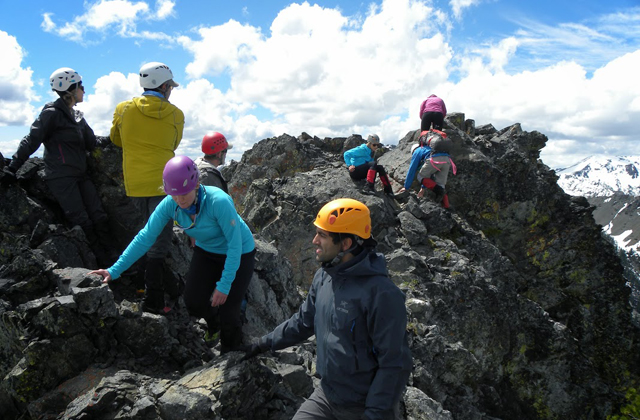 Volcanic Neck Peak NE of Bean Peak in the Teanaway region during The Mountaineers scrambling “Experience Field Trip” held every June. Photo by Chris Pribbernow, courtesy of The Mountaineers.

Who is a scrambling class right for?

You'll find men and women, from college students to retirees, all with incredibly diverse backgrounds in the scrambling community. Karen Daubert, WTA's Executive Director, has long been an alpine scrambler. She often combines her hikes with a peak scramble. Last weekend she hiked to Annette Lake and then scrambled up to Abiel Peak's west ridge.

If you've ever wanted or needed to head off trail and cross a scree field or up to a summit, but felt out of your depth, a class might be a logical next step.

"A lot of backpackers spot a saddle and want to head up it," says Pearce. "The Mountaineers scrambling course helps you read the terrain and know when you might be getting in over your head."

Any hiker who wants a structured environment to dip their toe into beginner technical skills—like navigating over ice and snow—might find a scrambling class a good place to start. Plus, it's never a bad idea to practice to navigation and first aid skills.

"These are perishable skills," Pearce says. "The more you do any of these skills, the better off you'll do in the backcountry."

Backpackers who want to seek out more solitude or put together their own traverses and loop routes involving a section of off-trail travel might also be interested in the class. Anyone considering thru-hiking a long trail (like the Pacific Crest Trail) when you might need to use an ice axe might benefit as well.

Pearce says he's also found a great community and camaraderie through his class and the club. He's met people young and old to share adventures with who also share his passion for giving back to Washington's wild places. He now volunteers his time with the Mountaineers scrambling committee and says that helping others learn has reinforced his own skills. 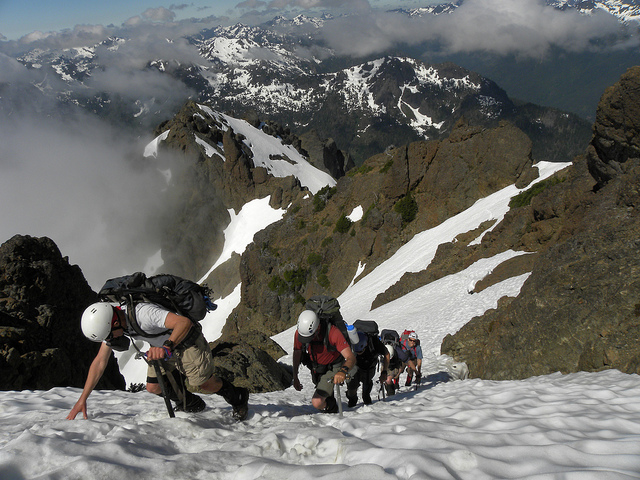 A party of Mountaineers scramblers climbs The Brothers on the Olympic Peninsula. Photo by Chris Pribbernow.