Skip to content
Hobbit Hikes Part 2: Washington's Middle-earth The Hobbit: The Desolation of Smaug opens in theaters at midnight tonight, and if you've ever hiked in Washington, some of the awe-inspiring scenery may look a little familiar. Seek out your own epic adventure on one of these trails worthy of Bilbo himself. https://www.wta.org/news/signpost/hobbit-hikes-part-2-washingtons-middle-earth https://www.wta.org/news/signpost/hobbit-hikes-part-2-washingtons-middle-earth/@@download/image/sq-city-of-vale-desolation-of-smaug-mountainside_movie-2-AND-artist-point-MountShuksan-Evan-Buehler.jpg

The Hobbit: The Desolation of Smaug opens in theaters at midnight tonight, and if you've ever hiked in Washington, some of the awe-inspiring scenery may look a little familiar. Seek out your own epic adventure on one of these trails worthy of Bilbo himself.

The Hobbit: The Desolation of Smaug opens in theaters at midnight tonight, and if you've ever hiked in Washington, the awe-inspiring scenery may look familiar. If you're feeling the need to seek out an epic adventure (or a dragon) after watching the movie, WTA's got you covered.

From  Mirkwood's gloom to The Lonely Mountain's craggy peaks, we've found Washington versions of places in the first two films from Peter Jackson's vision of J. R. R. Tolkien's classic tale. Some of the trails you can hike or snowshoe right now; the others will have to wait until next spring and summer.

Can't get enough Hobbit Hikes? Check out last year's blog with hiker suggestions for more ideas. And if you have your own thoughts about which of Washington's mountains is the Loneliest (Mount St. Helens, maybe?), share your Hobbit moments on trail in the comments below.

You'll feel like you're approaching the Desolation of Smaug when you snowshoe under the lofty peaks Mount Baker and Mount Shuskan at Artist Point. >> Snowshoe Artist point. 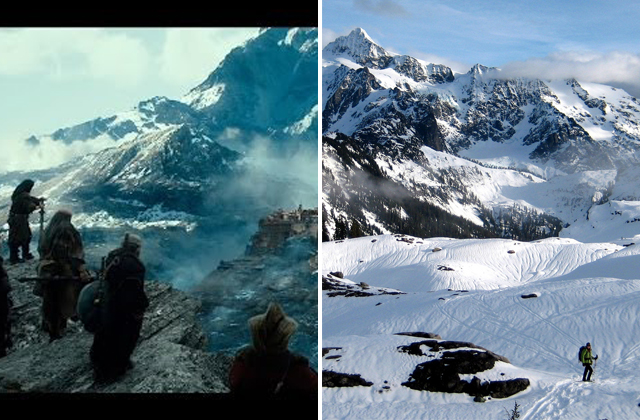 The City of Vale/Desolation of Smaug and a view of Mount Shuskan snowshoeing Artist Point. Photo by Evan Buehler

Channel the athleticism and grace of your inner elf as you scale the trail to the rocky top of Oyster Dome, which will give you ocean views not too far off from these in the new film (which we think must be the Long Lake). >> Hike Oyster Dome. 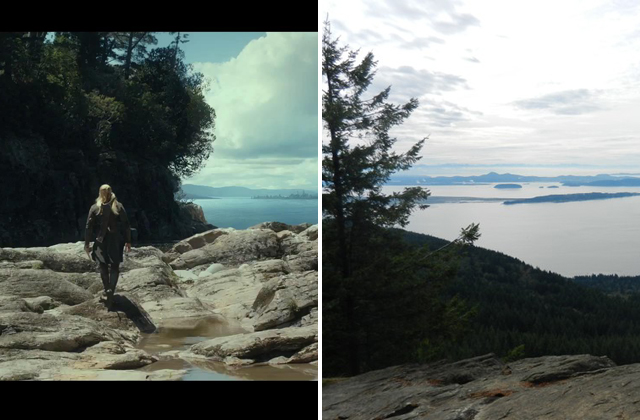 While Oyster Dome (right) might have an ocean view, it's pretty darn close to this rocky lakeshore perch in new The Hobbit film. Photo of Oyster Dome by George &amp; Sally

Mirkwood Forest is so dark you might need to head into Ape Caves (shown below) to get the same effect. On the other hand, venturing under the tree canopy of Rockport State Park or the Hoh River Trail on a gloomy day might offer a similar feeling.
>> Hike Ape Caves (snow may require a snowshoe from the gate, once it is closed for the season). 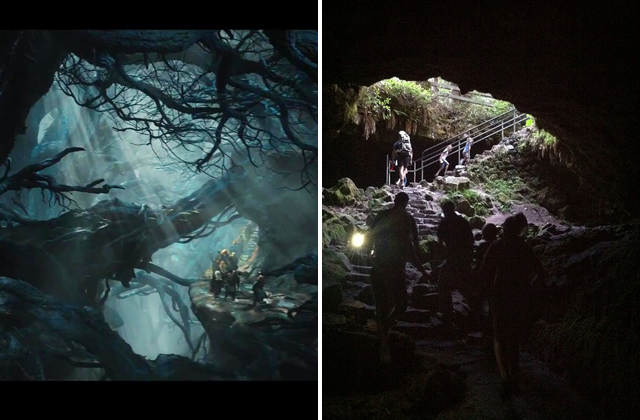 Mirkwood Forest is dark enough that we think you might need to head to Ape Caves for the same feeling. Gretchen Shuetter.

Take a journey worthy of Bilbo and head into the backcountry for two or five nights next summer. One way to feel like you're approaching the towering heights of Erabor (we think) is to climb up and over Granite Pass on the Pacific Crest Trail. From there, you'll take in the red rock views of Tower Mountain (shown below).
>> Add the Snowy Lakes - Golden Horn section of the PCT to your My Backpack.
>> Backpacking 101 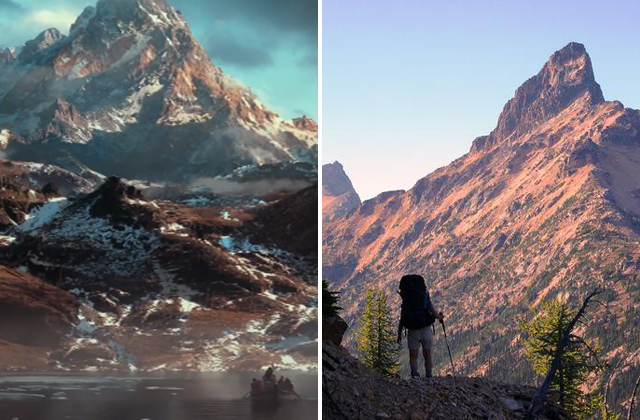 This shot of The Lonely Mountain (we think) and the Long Lake reminded us of this shot of Tower Mountain from Granite Pass. Photo by Willy

Another hike to plan on for next summer. Take a trip to the Okanogan Highlands and you'll feel like you're stepping into a scene from the first film of The Lord of the Rings. The wide-open, high-elevation rocky grasslands of Tiffany Mountain will have you peeking under every other boulder for a secret passageway. >> Save Tiffany Mountain to your My Backpack. 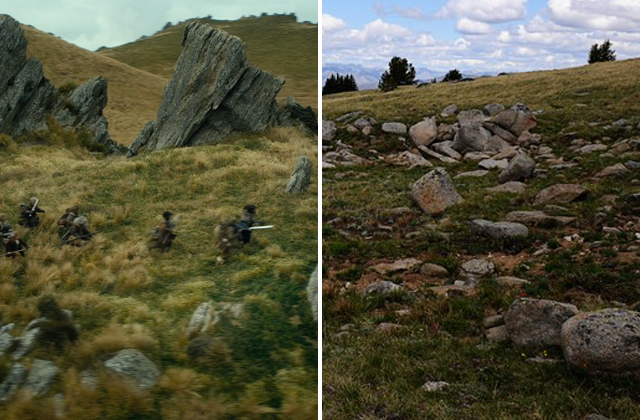 In the shot from the first film, the traveling party flee danger across a rocky landscape that looks an awful lot like Tiffany Mountain in the Okanogan Highlands. Photo by cascadehikers 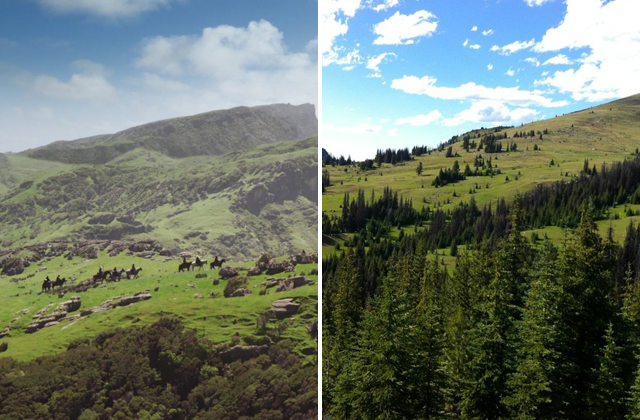 Channel your hobbit traveler on the high plains for Horseshoe Basin.Photo by hikermom

Hike Kamiak Butte (aka The Shire)

Hikers in Washington often have the delightful experience of feeling like they just stumbled into The Shire. In spring, the lush rolling hills of the Palouse as seen from the Kamiak Butte Trail in southeast Washington are a strong contender for Shire-status. The best time to tackle this trail is March-October.  >> Save Kamiak Butte to your My Backpack. 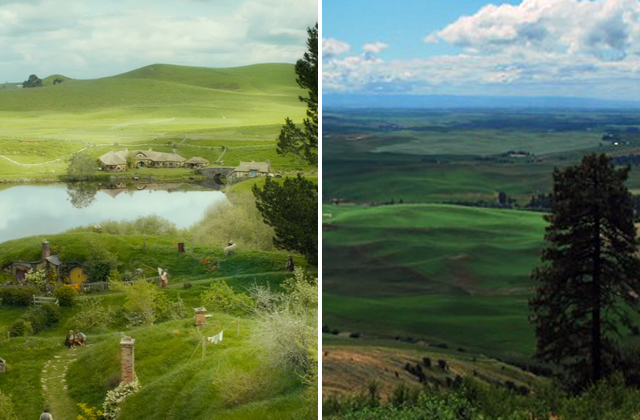 The view of rolling hills from Kamiak Butte Trail reminded us of those Shire hillsides that make such nice, cozy Hobbit holes. Photo by Natasha'n'Boris.

Thanks to my friends Bath & Carl, who pointed out that the "Big Cedar" in Olympic National Park, near Ruby Beach, should be an Ent. It has the stature, fingers, and face hiding in the bark. According to Wikipedia, "Ents (or Treants) are a race of beings in J.R.R. Tolkien's fantasy world Middle-earth who closely resemble trees. The Ents appear in The Lord of the Rings as ancient shepherds of the forest and allies of the free peoples of Middle-earth.

My favorite Hobbit Hike to add to the excellent accounts from WTA. - When my son was ten he bore a strong resemblance in size, shape and general temperament to Sam Gamgee. He spent the whole of that summer practicing songs from Lord Of the Rings, preparing for a fall performance with his choir, Pacific Youth Choir of Portland and the Oregon Symphony.

We made a backcountry trip to the southwest side of Mt. Adams, and at some point I realized I was wandering through a mountain wilderness with a hobbit-like person singing songs in the Elvish tongue, while visible on the horizon was a smoking volcano - Mt. St. Helens in one of her hot flashes.

Such a great story!

You have a real Washington hobbit on your hands. So cool.