Skip to content
Juneteenth: Celebrating Black Voices in the Outdoors We're marking Juneteenth by celebrating voices and organizations creating space and more inclusive representation for people of color in the outdoors. https://www.wta.org/news/signpost/juneteenth-celebrating-voices https://www.wta.org/news/signpost/juneteenth-celebrating-voices/@@download/image/outdoorafro.png

We're marking Juneteenth by celebrating voices and organizations creating space and more inclusive representation for people of color in the outdoors.

Today is Juneteenth, a day that has marked emancipation and freedom from slavery since 1865. To honor the spirit of that day, please join us in celebrating just a few of the leading voices in the outdoor movement who continue to break down barriers and shift the narrative about people of color in the outdoors. 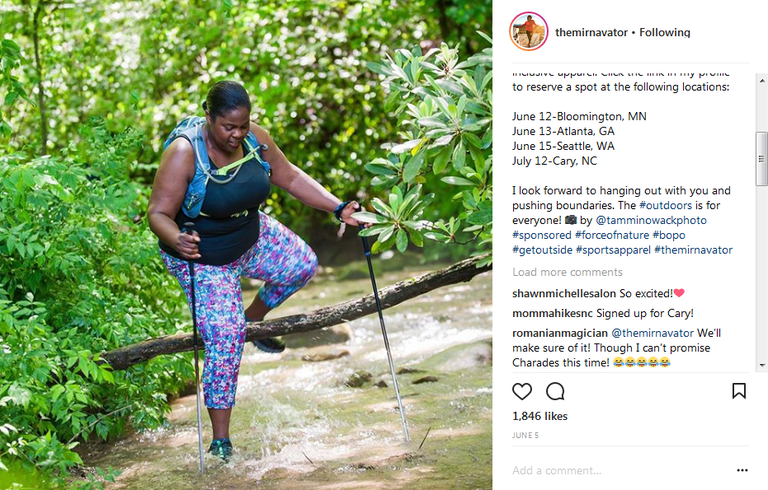 Mirna Valerio is a teacher, an ultra-marathon runner, a writer, a coach and a diversity practitioner. REI's 2017 video “The Mirnavator” told part of Mirna's story about breaking down barriers and expectations on and off trail. Since then she has been featured in National Geographic, Ultra - Runner’s World, and ESPN. Mirna has also just written a book entitled "A Beautiful Work In Progress."

Brothers of Climbing is a Brooklyn based rock climbing organization that is changing the narrative for the outdoor community. Their mission is to create more opportunities for people of color to feel included and represented in the climbing community. 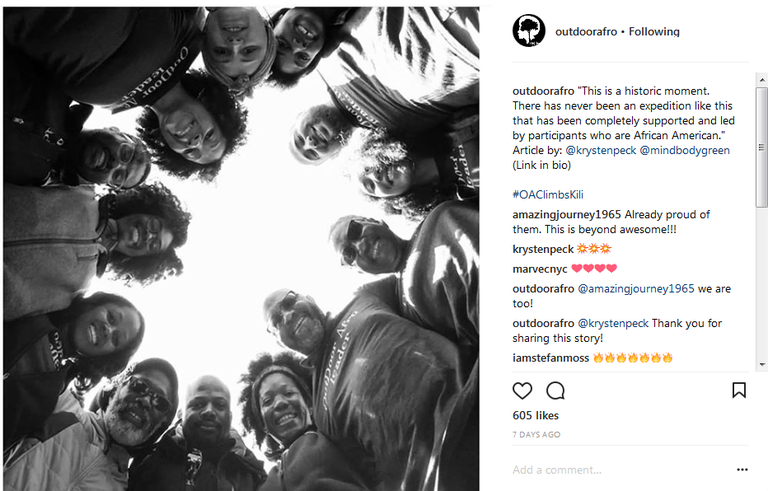 Outdoor Afro is a national nonprofit organization that is continuing to be a leader in the outdoor industry, working to celebrate and inspire African American connection with the outdoors. The organization has more than 80 leaders in 30 states that are dedicated to bringing thousands of people opportunities to get outside. Last year, local leaders teamed up with WTA to share tips and trail smarts with new hikers. 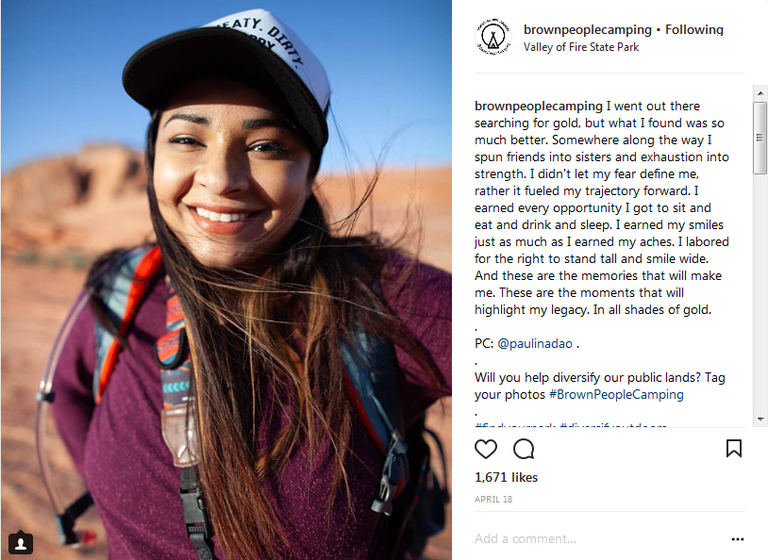 @BrownPeopleCamping is a social media initiative that utilizes personal narratives and digital storytelling to promote greater diversity in our public lands and outdoors community. Ambreen Tariq founded @BrownPeopleCamping in August 2016 in celebration of the National Park Service’s centennial. Ambreen shares how her experiences as a Muslim, South-Asian American immigrant woman have shaped her love for the outdoors, and she often reflects on the role privilege plays in enabling us to enjoy the outdoors. 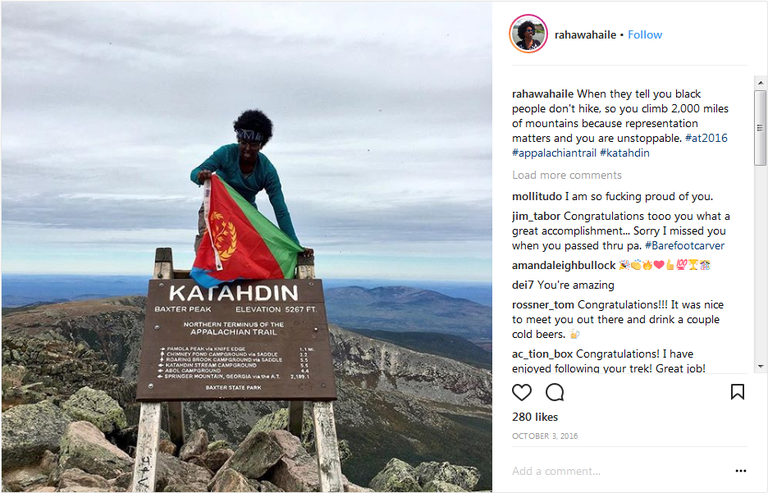 Rahawa Haile is a writer and a hiker at heart. In 2017 she wrote "Going It Alone" for Outside Online recounting her solo-hike along the Appalachian Trail from Georgia to Maine during the 2016 election. She was recently spotlighted by REI, and many of us at WTA are looking forward to the day when her book-in-progress is published. 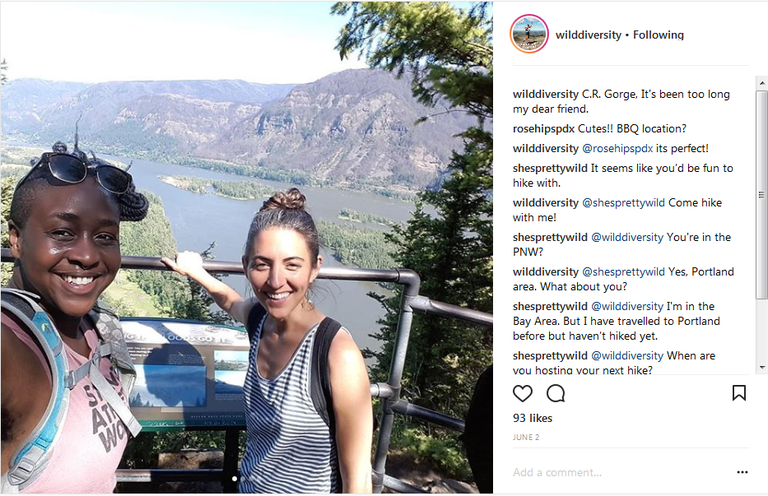 Photo in the Columbia River Gorge courtesy of @wilddiversity.

Wild Diversity is a Northwest organization that strives to elevate people of color and the queer community in the outdoors. They focus on offering resources to queer, minority and low-income youth.

GirlTrek is the largest national public health nonprofit for black women and girls. Vanessa Garrison (a Seattle local) and T. Morgan Dixon (a former history teacher) established GirlTrek in direct response to the systemic health crisis experienced by black women today. It began as a hiking club for the students in Dixon’s class, and has evolved into a movement to mobilize one million black women to walk—for at least 30 minutes, 5 days a week—to reverse the devastating impacts of chronic illness and obesity by 2020.

"Walking is the single most powerful thing that a woman can do for her health. Because from Harriet Tubman to the women in Montgomery, when women walk, things change,” Dixon says in their TEDTalk.

POC Climbers of the PNW - @climbingncolor
ClimbingColor is a group of climbers with all different personalities, perspectives and colors. They are actively working on inspiring more people of color to join the climbing community. Read their most recent blog, "Jim Crow Say No." 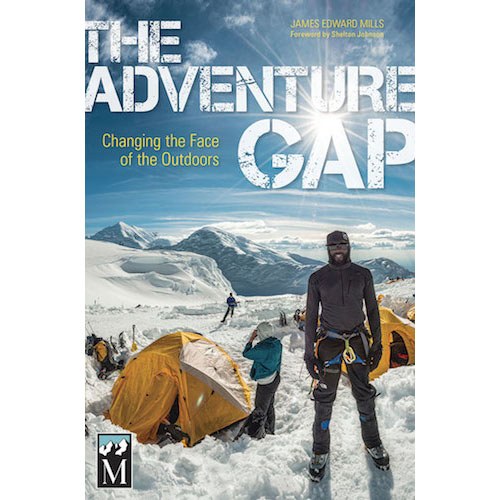 James has dedicated the past 20 years of his life to freelance journalism and independent media production. He covers stories about outdoor recreation, environmental conservation and social responsibility as it relates to sustainable living.

In a Q&A with author James Edward, WTA had the chance to talk with him about his work on a project called "The Adventure Gap"—a book highlighting the first all African American summit attempt of Mount Denali.

Latria Graham - website
Latria is a writer, editor, and social critic. Her writings revolve around race, gender-norms and cultural misconceptions. Recently, Latria wrote a piece that was published in Outside Magazine entitled "We're Here. You Just Don't See Us." The article looks at a common misconception that black people don't enjoy wild places. Latria talks about the National Parks Services history of discrimination and the lack of access for people of color, among other things. Find more of Latria Graham's work.

Theresa Baker
Theresa is the founder of African American National Park Event which aims to engage diverse audiences in the outdoors. The Trail Posse's Glenn Nelson profiled her for High Country News.

Betty Reid Soskin -  Ranger for the National Park Service
At the age of 96, Betty is still working as a Park Ranger for the Rosie the Riveter/World War II Home Front National Historic Park. She is a powerful voice in the African American community who has worked tirelessly to battle discrimination and honor women. Betty is a songwriter, businesswoman, and most notably a community activist. Her role as a field representative for California State Assemblywomen allowed her to become actively involved in the planning and development of a park to memorialize women for their role on the home front during WWII.

Charles Young was a soldier, civil rights leader and the first African -American National Park Superintendent. During his life, he overcame tremendous inequality and injustice in the years that followed the Civil War. He worked his way up the ranks in the United States Army, and in the summer of 1903, Captain Charles Young became the first African-American National Park Superintendent of Sequoia National Park. His distinguished career in the Army made him an inspiration for the generations that followed.